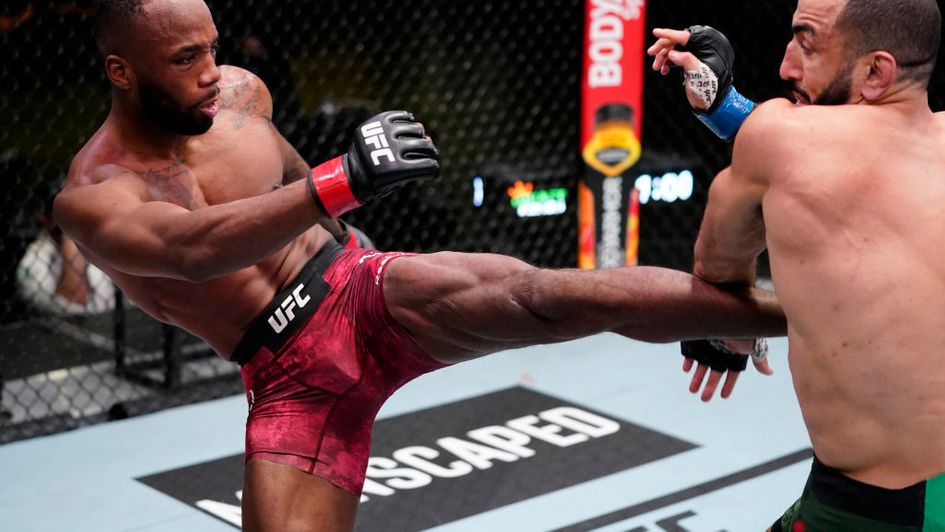 Will Dean has three fancies for this weekend's action at UFC 263, where Leon Edwards can make a statement and earn the fight he deserves.

3pts Joanne Calderwood to win by decision at 6/5 (bet365, BetVictor)

After a failed attempt to capture a second belt and claim the famous 'double champ' status, Israel Adesanya returns to defend his Middleweight title at UFC 263 against a familiar foe. Since losing a highly competitive split decision to the New Zealander three years ago, Marvin Vettori has been on the warpath, winning five straight bouts and looking hungry for redemption every step of the way.

The co-main event features another rematch, as Deiveson Figueiredo and Brandon Moreno lock horns again for the Flyweight title. Their clash in December 2020 was one of the fights of the year, ultimately ending in a draw. Fans will be eager to see the explosive South Americans go to war once again, hoping for a winner to finally emerge.

Alongside these bouts, a variety of stars from the United Kingdom are in action, as Leon Edwards takes on fan favourite Nate Diaz in a rare five round fight. Elsewhere on the card, Joanne Calderwood faces off in a number one contender bout with Lauren Murphy, as well as fellow Scotsman Paul Craig competing against Jamahal Hill.

Saturday, June 12 - although it will be Sunday morning for UK viewers

As soon as Israel Adesanya’s 2018 bout with Marvin Vettori came to a close, there was a strong feeling that the two would meet at the top of the division years later. The Last Stylebender has since gone on to become one of the most dominant Middleweight fighters of all time, while The Italian Dream has dispatched every foe put in front of him as he looks to avenge that split decision loss.

Both fighters have developed their strengths in the three years that have followed, but neither has evolved or significantly altered their style. For Adesanya, keeping the fight standing and blasting his opponents with accurate shots will always be the objective, whereas Vettori still looks to push the pace and drown his opponents with top pressure.

The first fight was closely contested, with the New Zealander dictating the striking but the Italian having success with the grappling. At such a high level, neither fighter had defensive holes great enough for the other to find a finish, and the same should still be true on Saturday night.

Confidence in the fight going to decision largely derives from Vettori’s style, as the Italian is one of the most durable fighters the UFC has ever seen. With a seemingly iron chin, he is able to walk forward and absorb his opponent’s best offence as he looks for a takedown. If he secures it, then he will opt to maintain position and throw ground strikes, instead of hunting a submission. The Italian Dream’s style is certainly effective, but it has led to eight of his 10 UFC bouts hitting the scorecards.

I therefore expect Saturday night’s main event to be no different to the first, with both combatants having success with their styles across 25 hard-fought minutes. The eventual winner is much harder to predict, as the five-round title stipulation may swing in the Italian’s favour. Adesanya showed in his recent loss to Jan Blachowicz that he can be controlled on the mat, but Vettori was unable to do so in the first two rounds of their 2018 clash.

A bet on the FIGHT GOING TO DECISION is a much safer option and provides great value at 4/5.

Better late than never for Edwards

Few professional athletes will have had a more turbulent time during 2020 than UFC Welterweight LEON EDWARDS.

Rocky was scheduled to headline a March event in London against Tyron Woodley, with the winner being granted a shot at Kamaru Usman’s title. The United Kingdom went into lockdown the week of the fight, shelving Edwards for the remainder of the year and letting both Gilbert Burns and Jorge Masvidal jump the queue to fight for the belt. Edwards made plans to face the surging Khamzat Chimaev at the end of the year, but Covid-19 had other plans and the bout was scrapped after three unsuccessful attempts to rebook it.

The Birmingham-born fighter finally managed to return to the Octagon in March of this year, breaking a near two-year stint of inactivity. Things turned from bad to worse when an accidental eye-poke after just five minutes rendered the bout a no-contest, sending Edwards back to England without a strong claim for the title shot he so rightly deserves.

Thankfully, the UFC have given Rocky another opportunity to remind the world why he is currently riding an eight-fight winning streak, pitting him against fan favourite Nate Diaz. The Stockton brawler has reached a new level of fame in recent years, mostly due to his wars with Conor McGregor, which have made him a high-profile opponent that many would dream of fighting.

A win against Diaz would be the exact marketing push that Rocky needs to get his showdown with Usman over the line, and the UFC knows this. While many fans believe that Diaz belongs at the top of the division, others think he is largely overvalued due to a shock victory over McGregor in 2016. Aside from that win, Diaz has no standout victories on his record, which stands at 20-12.

The oddsmakers are also aware that Edwards is a significantly better fighter than Diaz, with the Englishman currently sitting as a justifiable 1/6 favourite. As is often the case with MMA betting lines, a heavy favourite often implies a higher likelihood of a stoppage victory, which Edwards is seldom capable of. Rocky has seen seven of his 10 UFC victories come from the judges’ scorecards, making it unlikely that he will be able to finish the ever durable Diaz.

The biggest threat to this wager would be from Diaz’s scar tissue opening up a cut that forces a doctor’s stoppage, much like how the Masvidal fight ended. However, this is a rare occurrence in MMA and Edwards is historically less damage-inducing than Gamebred.

At 5/6, I am willing to take a slight risk on Diaz surviving until the fourth round, where Edwards can either find a late finish or pick up another dominant victory on points. Back him to win in ROUND 4, 5 or VIA DECISION with Paddy Power and Betfair Sportsbook.

JOANNE CALDERWOOD’s love for fighting cost her dearly last year as she forfeited her spot as the number one contender with a loss to Jennifer Maia. JoJo was originally scheduled to face reigning champion Valentina Shevchenko, but welcomed a late-notice replacement when the latter sustained an injury in training. The eventual loss will have certainly stung for Calderwood, who has been vocal about her desire to compete for the belt since she made her UFC debut in 2014.

The North Ayrshire-born Scot came back with a vengeance in January, defeating the then sixth-ranked Jessica Eye. In that fight, Calderwood showed off her impressive Muay Thai ability, winning the majority of the clinch exchanges and throwing brutal knees and elbows. From a striking perspective, JoJo is one of the division’s best and has proven herself against a high level of competition over the years.

Before she can reclaim her spot as the Flyweight division’s number one contender, Calderwood will have to defeat the ever-developing Lauren Murphy. At 37 years of age, Lucky has had somewhat of a career resurgence, claiming four consecutive wins after losing four of her first six UFC bouts. A winning streak of that length is impressive enough to catapult an experienced fighter to the top, especially in a division starved of prospects, but Lucky has had some good fortune along the way (as her nickname would suggest).

The calibre of opponents that Murphy has faced is certainly worth highlighting. To begin her winning streak, she scored a late knockout in a back and forth war with Mara Borella, who went on to lose a further three fights before being released. Six months later, she was on the winning side of one of the most controversial judges' decisions in recent memory against Andrea Lee. Murphy did score a legitimate win against Roxanne Modafferi, before dispatching a late-notice replacement in Lilliya Shakirova, who seemed far short of UFC calibre.

With a decisive victory over Lee already under her belt, it is likely that Calderwood would have been even more dominant against the same run of opponents. Competing against Murphy, Calderwood should have the much more diverse striking and better volume, with the toughness to take her American opponent’s best shots. As long as Calderwood can keep this fight standing, she should win.

I was surprised to see the oddsmakers originally line this fight as a coin flip, but the betting public have already begun to rectify this. For added value, I believe a bet on CALDERWOOD TO WIN BY DECISION is a smart play, as JoJo has not finished a UFC bout in almost three years. Murphy is also one of the division’s toughest competitors, making it likely that Calderwood wins a decision victory and a future fight against Shevchenko.