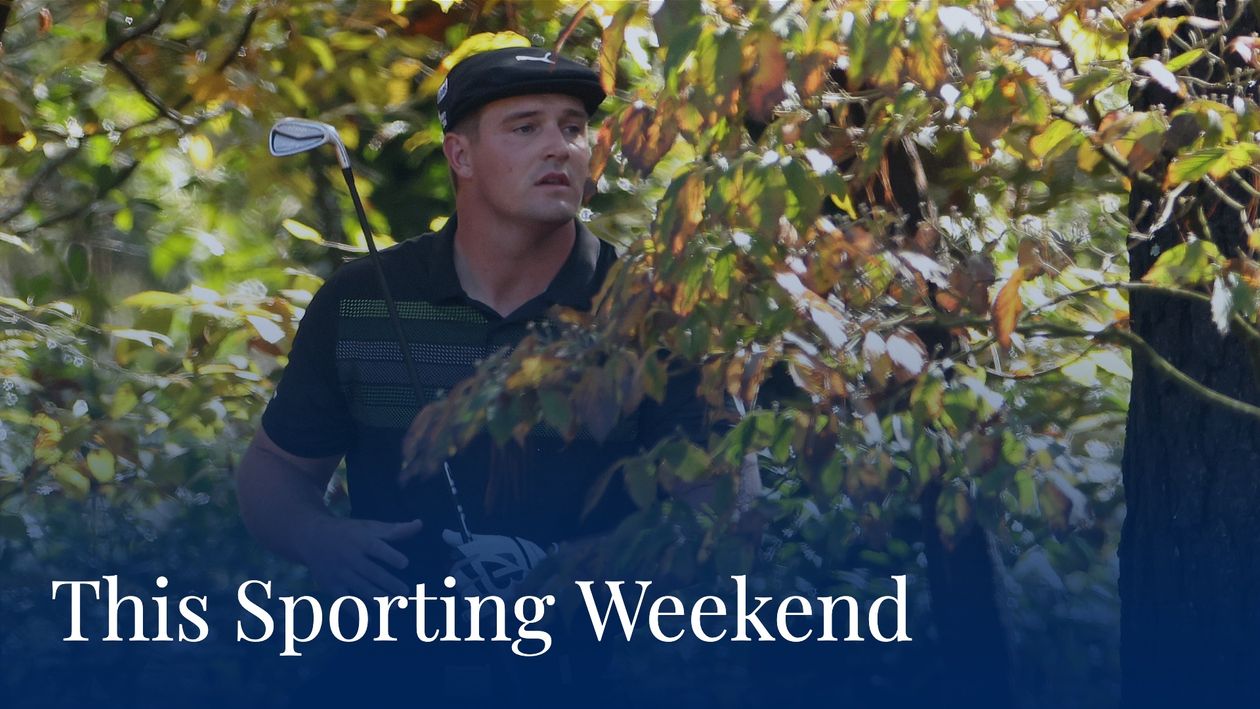 Ben Coley looks ahead to the weekend in sport

In its traditional spring slot, the Masters occasionally falls on the same weekend as the Grand National. Now, seven months later than scheduled, it finds a different bedfellow from within the National Hunt world: Cheltenham. What a weekend it promises to be, one which allows for all kinds of possibilities, most likely being that as Prestbury Park yields some surprises while Augusta National sticks rigidly to the form book in some way or another.

Golf first, and at the time of writing we have just the first round of the Masters in the books, a morning storm in Georgia testing patience which had already been pushed close to its limits. When play did begin, we were presented with a soft, relatively straightforward course, and some absolutely top-notch entertainment from Bruce Foresight, who had predicted that par for him was not 72 but 67. In the end, Bryson DeChambeau settled for 70, an excellent retrieval after a horror start, but one which left him with even more heavy lifting to do.

DeChambeau, let's be clear, is the sort of character who either goes looking for stick or else is so oblivious to the world and its machinery that he probably deserves it anyway. It is possible, need it be said, to simultaneously respect his work ethic, his eagerness to find the path to greatness and willingness to take the demanding steps it requires, and to laugh at his expense.

An enormous amount of hard work has gone into becoming a Colossus and not a Greek salad in sight. Imagine finding the hours in the day to eat a dozen rashers of bacon and work out as he does, especially factoring in toilet stops. So far has he pushed the boundaries that it would not surprise me were he to have discovered two more hours in the day which, for the sake of comedy, we'll call The Twitching Hours. He is in many respects to be admired.

But he is also a man of questionable character, or at least he can be. It's not the boastfulness, the self-absorbed video streams (we're back to Twitching here, I think, so the joke is more than toilet humour I'll have you know), not even the questionable associations and friendships, and we can probably even let the PR he did for Saudi Arabia slide for now. No, all you need to do is go back and watch him at Muirfield Village this summer, when things went spectacularly wrong. That's when you learn about someone, and the way he spoke to people doing their jobs - officials, camerapersons, whatever - said more than another speed video ever could.

Well they did say he'd hit it to spots nobody else would.

That's why DeChambeau quickly becomes the butt of the joke when things go awry, as they so spectacularly did at the 13th hole on Thursday. Bashing his drive into trees and then having two attempts from the pinestraw, neither of which could be called successful, the US Open champion ran up a seven at a hole we'd expected him to reduce to a drive, a wedge, and either one or two putts. So far at least, Augusta continues to prove capable of swatting flies. The trouble is they only play here once a year, and anyway, at some stage DeChambeau will do what he does and figure it all out. He may even do it in time for Sunday.

Despite all that, there can be no doubt that the commentary box is probably not the place for Bryson bashing and at times on Thursday that is precisely what coverage descended into. Credit to Nick Dougherty and Paul McGinley in the Sky Sports studio, whose debate was balanced and praise generous. To do so while filling a three-hour suspension makes it particularly impressive. In the box, however, hearing that his tactics were wrong after every bad shot began to grate - especially when the problem, as is usually the case, was actually in execution.

It is, of course, not all about DeChambeau, and the starts made by Tiger Woods, Jon Rahm, Justin Thomas*, Dustin Johnson*, Hideki Matsuyama, Paul Casey, Lee Westwood and many other would-be contenders bodes well for the weekend ahead. Already we know the Masters winner will not be a major shock - not unless Larry Mize continues to match the pre-tournament favourite and defy time. Nice to see you, to see you, Mize.

Like a university friend who got in with the art crowd and quickly stopped speaking to the rest of us, Frodon is now too cool for Cheltenham handicaps, and is therefore absent from an otherwise excellent card on Saturday.

Had he lined up for the Paddy Power Gold Cup (ex-Thomas Pink for those of my exact generation), the little terrier could've been forced to concede 11lb and more to the rest now his rating has been revised upwards to 169. Instead, he's expected to head to Aintree for the Many Clouds Chase, where another victory could have him within a few pounds of twice-Real Gold Cup hero, Al Boum Photo.

Sticking to Cheltenham, our antepost money will be carried by Slate House, advised in Matt Brocklebank's column three weeks ago and now less than half those 25/1 odds. Matt, of course, will be tackling the card afresh for the latest Value Bet at the end of a good run for our team, powered by Rory Delargy and Dave Massey and their unmissable Punting Pointers which has enjoyed a fine week.

Be sure to get these previews throughout Friday and across the weekend, but let's be honest, the real racing headline is that we've captured Willie Mullins to bolster our squad of columnists and contributors. Mullins will be taking you through his team every weekend and on the eve of all the major festivals, and you can also find out his five horses to follow including a current Gold Cup outsider who the man himself suggests may be worth a small bet.

I am quite hard to impress, which is underlined by the fact I am giving Breaking Bad another go at present. Encouragingly, I am into it this time and hope that I'll come to the end of what I'm sure is one series too many, Hank confirms early promise and is our hero. No spoilers please. Despite that miserly reputation, I must say that our football team have been coming up with some inspired selections lately, Tom Carnduff landing the place money with a 66/1 first goalscorer tip a week and a half ago and Joe Townsend nailing 12/1 first scorer Ryan Christie on a thrilling Thursday for Scotland. They'll be previewing the weekend's action as ever.

Not being one of those who holds a centuries-old grudge, I switched from golf to football to cheer on Scotland in their penalty shootout and was briefly swept away in the excitement. Not quite so swept away as the commentator, though, who cried: "Scotland as a nation can rise again!" What exactly that means I have no idea but there you have it, Scotland. You have permission to re-enter the world.

In betting, of course, there's no room for sentiment - even if I did tell you Rory McIlroy would win the Masters just last Monday. And that's why we should surely switch allegiance and back Slovakia to beat Scotland on Sunday. What on earth are Scotland doing playing a Nations League game little more than 36 hours after winning a historic penalty shootout? Surely, Steve Clarke will ring the changes. Surely, Slovakia will begin this match as odds-on favourites and willingly oblige.

Whatever happens there, we have something to look forward to next summer with England set to face Scotland at Wembley. Whether or not the Three Lions deserve to be such strong favourites for that, the group, and the entire competition, I'll leave you to decide.

A different kind of fix

Rugby union has its own Nations Cup this weekend, the Autumn Nations Cup, which replaces the Autumn Internationals. Quite what point it's supposed to serve remains unclear but the case for backing France is a pretty compelling one, dare I say especially to those who profited from Les Bleus in the aforementioned Five-and-a-bit Nations.

Easier to explain is the boxing calendar which is stacked until nearly Christmas, when we hit an AJ-shaped crescendo. For now, Kell Brook heads to the United States to face Terrence Crawford, a fight he will surely lose - the question is how? Chris Oliver has the answers, or at least we hope so, and also looks at a quality Sky Sports card where Katie Taylor headlines.

Finally, worth mentioning that Andy Schooler has another big-priced tennis tip going well, plus this preview of the ATP Finals which begin on Sunday. Andy has bagged two winners in three weeks and is looking for a third in four with Vasek Pospisil, who is a semi-finalist in Sofia. Providing the Canadian makes the final by beating Richard Gasquet, it will be another winning week.