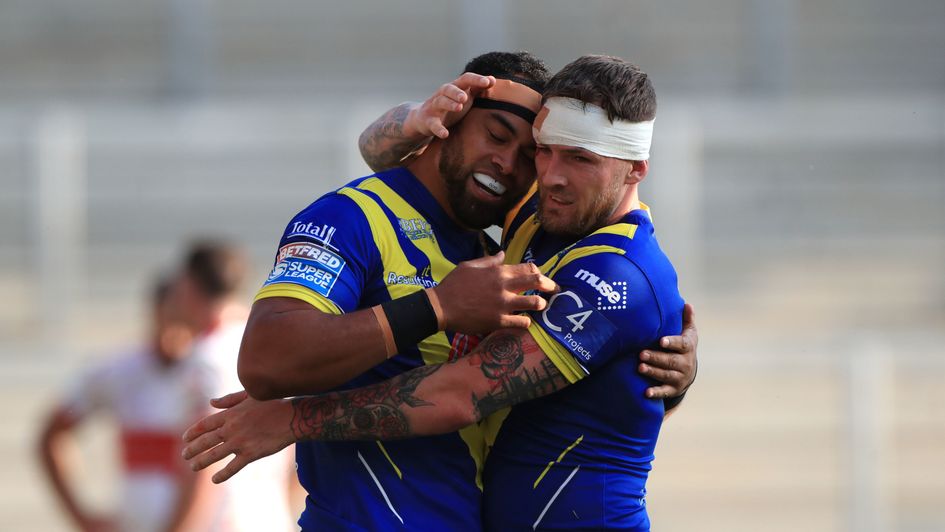 A review of Saturday's action in the Super League where Warrington and Catalans both recorded impressive return wins.

Winger Tom Lineham scored his team's first and last tries as Warrington brushed off the cobwebs with a 40-10 win over Hull KR in the Betfred Super League at Headingley.

The full-strength Wolves beat Hull 38-4 in their last match before lockdown in March but looked distinctly rusty before eventually finding their rhythm with five second-half tries.

Playing without the fear of relegation, bottom-of-the-table Hull KR had their moments, particularly in the first half, and their players had plenty to prove with coach Tony Smith opting to field all 11 of the club's off-contract players, including former Leeds prop Nathaniel Peteru for his belated debut.

They were boosted by an early score from the league's leading tryscorer Ben Crooks, his eighth in seven matches, on his return from a neck injury sustained just before lockdown and belied their league position with some confident play.

Both sides were reduced to 12 men for spells in the first half, with Warrington centre Anthony Gelling punished for a dangerous tackle and Hull KR three-quarter Shaun Kenny-Dowall dispatched for a professional foul, and they made good use of the extra space.

The Robins were good value for their lead but England second-rower Ben Currie found a chink in their defence on 23 minutes and timed his pass to perfection to put Lineham over at the corner for his first try.

Full-back Stefan Ratchford kicked the conversion from the touchline to make it 6-4 after 15 minutes but Rovers held firm until five minutes before half-time when replacement forward Sitaleki Akauola burst through a hole in their defence to touch down.

Ratchford's second goal made it 12-4, which was the half-time score, and the Wolves extended their advantage within five minutes of the re-start as Gelling used his strength to force his way over for their third try at the corner.

Ratchford could not add the extras but he was on target on 53 minutes after right winger Josh Charnley took Gelling's pass to finish off a flowing move with his side's fourth try.

That followed a sustained spell of pressure which illustrated how a team can build momentum to telling effect on the back of the new "six-again" rule.

The Robins hardly saw the ball in the third quarter and it was no surprise when the Wolves extended their lead, the superb Ratchford slicing through the defence to get scrum-half Gareth Widdop over before grabbing a try himself after full-back Adam Quinlan fumbled Blake Austin's high kick.

After kicking his fifth goal from six attempts, Ratchford was given the rest of the evening off as coach Steve Price opted to give the promising Matty Ashton a run at full-back on his return from a lengthy injury lay-off and he was denied a try by a last-ditch tackle.

Hull KR grabbed some consolation when Kenny-Dowall carved out a try for Quinlan which was converted by Ryan Brierley but Warrington had the final say when Widdop broke clear to get Lineham away for his second try.

Israel Folau was once more the talk of Headingley but this time for his prowess as a world-class player as he helped Catalans Dragons come from 14-0 down to earn a 40-14 victory over Castleford in the Betfred Super League.

The dual-code international showed his athleticism to score one individual try and create two more in a man-of-the-match performance as the French club bounced back in style from their 34-6 hammering by St Helens, scoring 40 unanswered points after they making an awful start.

Folau declined to take a knee in support of the Black Lives Matter movement for the second successive week and this time he was joined by two of his Catalans Dragons team-mates, Benjamin Jullien and Sam Moa.

Catalans coach Steve McNamara said after last Sunday's game that the players were free to make a personal choice on the matter and, as a devout Christian, Folau is thought to have taken the view that he will bow only to his God.

Folau, who was sacked from his Rugby Australia contract in 2019 for quoting a biblical verse saying "hell awaits" drunks, homosexuals, adulterers and other categories of sinners, then endured a difficult start to the match as his opposite number, Michael Shenton, raced in for two tries inside the first 10 minutes.

The Castleford captain opened the scoring after winning the race to Jake Trueman's grubber kick on the last tackle and then took full-back Greg Eden's pass to grab his second.

Danny Richardson kicked both conversions, adding a penalty on 14 minutes to make it 14-0, and the Dragons were staring at another crushing defeat.

However, Folau stopped the rot when he unleashed winger Tom Davies on 22 minutes for his first try for the club before the Catalans took full advantage of the sin-binning of Castleford centre Peter Mata'utia for a dangerous tackle on Sami Langi.

Replacement hooker Alrix Da Costa squeezed over from dummy half for his side's second try and the Yorkshiremen were still down to 12 men when Folau broke clean through their first line of defence in spectacular fashion before handing off Eden to score a solo try.

James Maloney kicked his second conversion to edge the Dragons into a 16-14 interval lead and they extended it in fortuitous fashion four minutes into the second half.

Tigers winger Derrell Olpherts safely gathered the ball from Garcia's kick on the last but inexplicably tried to pass it behind his own line and when the ball went to ground, Garcia was gifted a try.

It was a score that summed up the Tigers' hapless display as they squandered the chance to go top of the table.

Folau, who scored a try on his Super League debut in a 36-18 win over Castleford in February, showed his class again on 62 minutes when he rose high to bring down Josh Drinkwater's high kick and offloaded from the subsequent tackle to get second rower Joel Tomkins over for a try.

It was all Catalans by now and Davies went over for his second try and substitute Jason Baitieri also got in on the scoring act as Castleford wilted in the sun.