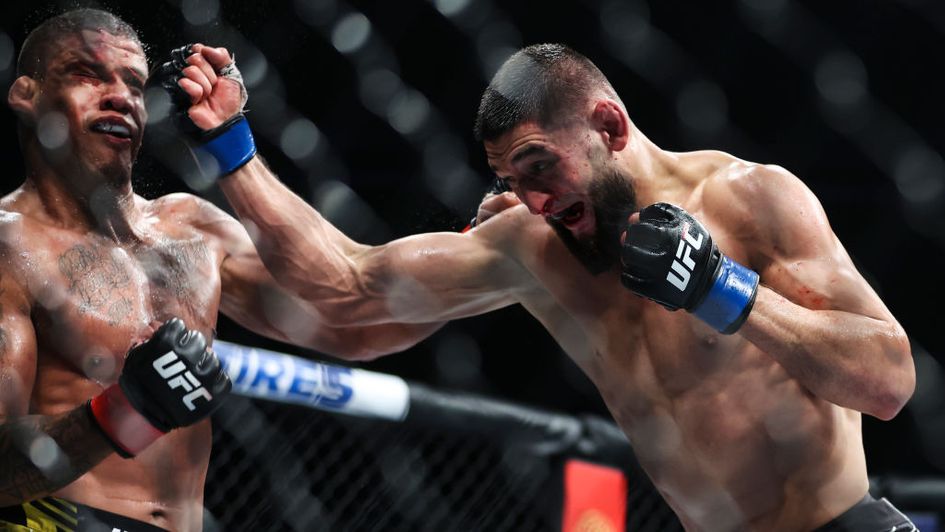 Khamzat Chimaev (right) is in action this weekend

MMA expert Will Dean previews UFC 279, where the main event is expected to take some sorting out. Get his preview and best bets.

Russian-born Swede Khamzat Chimaev has taken in the UFC by storm since his 2019 debut on Fight Island. After just four dominant outings, Borz eventually found himself in a co-main event spot against recent title challenger and now number four ranked Welterweight, Gilbert Burns. Whilst the significant step up in competition meant that Chimaev went to decision for the first time in his professional career, he certainly did not look out of place against the division’s best – outscoring the Brazilian on all three judges’ cards.

In all my years of watching Mixed Martial Arts, never has these been a fighter that has ascended the rankings as quickly as Chimaev. His skills inside the cage and his boisterous personality outside of it have clearly been leading factors in the Chechen fighter’s rise, but the rest of the division’s unwillingness to face him has also been key. Chimaev has been rightfully acknowledged as the next Welterweight title challenger for some time now, but the lack of ambition from those around him in the rankings has resulted in the unlikely re-emergence of Nate Diaz as his next potential victim.

The fan-favourite from Stockton has been vocal about his frustrations with the UFC in recent years and, with just one fight left on his current contract, it seems the promotion are looking to squeeze as much value as they can from Diaz before letting him go. Many fans were hoping that Dana White and the matchmakers would honour one of the sport’s most legendary figures with a favourable matchup to ride off into the sunset with, but that could not be further from reality with a tall order like Chimaev.

The difference in size between both men is sure to be a key factor in Saturday night’s main event, with Chimaev occasionally fighting at 185lbs and Diaz formerly competing at 155lbs. Whilst this is sometimes a narrative that gets blown out of proportion, the grappling heavy approach from the Russian will certainly highlight it, with Diaz likely struggling to return to his feet once he is inevitably grounded.

It is not often the oddsmakers grant a fighter a win probability of more than 90%, but it is hard to imagine Diaz having an real chance of beating Chimaev here. Much like last week’s main event at UFC Paris, there can however still be betting value found in backing the fight to last longer than expected.

Diaz has been revered by fans and fellow fighters alike for his durability and stubbornness inside the cage. Across 33 professional bouts that have spanned over 18 years, the Stockton fighter has only been finished on three occasions – A lone submission loss in 2006, a head-kick knockout in 2013 and, most recently, a controversial doctor’s stoppage against Jorge Masvidal almost three years ago.

Chimaev may have been a consistent finisher in all of his earlier UFC bouts, but the difference in defensive ability and overall calibre is night and day compared to Diaz. The man from the 209 seems near impossible to hurt with strikes, and his defensive grappling should be enough to stay safe from any submission attempts.

Considering this is also Chimaev’s first fight scheduled for five rounds, he may also surprise fans by coming out with a slower pace in the early goings. Either way, Diaz’s toughness has not shown any major signs of deteriorating so, barring another unfortunate doctor’s stoppage, this fight could very likely last OVER 1.5 ROUNDS. At 10/11, that is undoubtedly the most appealing play available for the main event.

The UFC matchmakers have chosen the perfect bout to headline the preliminaries, as Canada’s HAKEEM DAWODU faces Julian Erosa in an exciting scrap. Both men’s aggressive and forward pressing style should make for a thrilling clash that will get viewers’ blood pumping and serve as the perfect advertisement for the pay-per-view that proceeds straight after.

Dawodu is a highly skilled striker that is yet to be clearly outmatched on the feet. His kickboxing and clinch work are a pleasure to watch, and his defensive grappling has flourished in recent years. Mean Hakeem is almost the complete package, but a lack of victories by finish are all that have prevented him from being taken seriously as a future top 15 fighter in the Featherweight division.

When looking into the finer details of the Canadian’s record, his reputation for only winning by decision comes with a series of asterisks. Dawodu has been unfortunate enough to face a collection of some of the more durable UFC fighters that Featherweight has had to offer, with each of the six men he has gone the distance with all having no more than one knockout loss on their records.

Saturday night’s bout against Erosa will significantly break this trend, as Juicy J has been stopped by strikes on six occasions in his career. To make matters worse, the American has also suffered a knockdown in three of his last five UFC wins, indicating that his overall durability is a clear weakness.

The finishing potential is clearly there for Dawodu, who finished six of his seven pre-UFC victories via knockout. Erosa presents the perfect opportunity for Mean Hakeem to return to his dangerous ways, as both mens’ styles should see them meet in the centre of the Octagon and throw heat.

Overall, Dawodu is just the more technical and powerful striker, and should be able to match the ferocious pace that Saturday night’s opponent offers. The damage he inflicts to the body, as well as a series of kicks to his opponent’s legs and head should provide him enough of an opening to land a fateful shot on Erosa, who should not be able to stand and trade with the Canadian for 15 whole minutes.

Some fighters, such as Robert Whittaker last week, are reliable at coasting their way to decision, but Dawodu’s record deceives fans into thinking he fights the same way. The oddsmakers see Mean Hakeem’s likelihood of winning heavily revolving around a decision, which creates a great opportunity to take advantage of a favourable price in the knockout prop. Therefore, going against the grain and backing DAWODU TO WIN BY KO/TKO at 11/4 is an enticing bet this weekend.