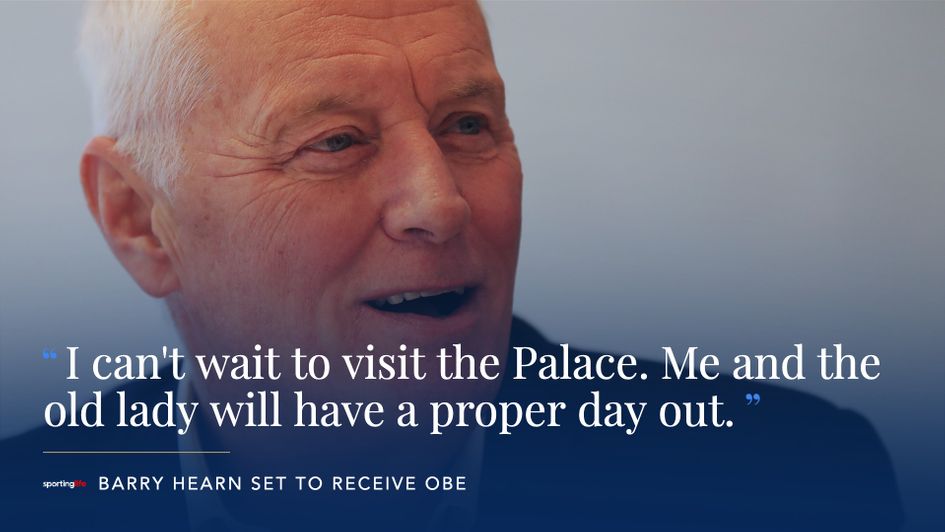 This is my proudest moment, says Barry Hearn as he insists Britain must return to normal by Easter

Barry Hearn declared that being awarded an OBE is "the proudest moment of my life" as he called for a return to normality, including full crowds at sporting events, by Easter.

Legendary promoter Hearn, the chairman of Matchroom, is receiving an OBE in the New Year's honours for services to sport.

The 72-year-old, who is also chairman of World Snooker Tour and the Professional Darts Corporation, has been involved with sport at the highest level for nearly half a century.

And Hearn told Sporting Life: "It's the greatest compliment anyone has ever given me. This is the proudest moment of my life without a doubt, outside of family and Matchroom - and that's family as well.

"It quite surprised me how pleased I was when I was given the news. It means a huge amount. It's a great honour. I can't wait to visit the Palace. Me and the old lady will have a proper day out, it will be lovely."

The special Christmas present comes at the end of one of the most difficult years of Hearn's life. Not only has Matchroom and its various sports had to deal with the ravages of the Covid-19 pandemic, but Hearn personally suffered a heart attack in the spring and had coronavirus in the autumn.

Typically, he is now looking to the future and has called on the government to roll out its vaccination programme as quickly as possible and get the country back on its feet by the start of April.

"It's been a terrible year. In my 45 years of sport I've never come across anything as challenging as Covid," Hearn said.

"Now we have an opportunity with vaccinations to put a dent in this and put a stop to it. What we need now is solid leadership with a proper recovery plan mapped out. We need enormous resources to get as many people vaccinated as quickly as possible.

Happy Christmas everyone. Together we get through this so keep safe and healthy.

"It's a huge job, but it's so beneficial for everyone to get back to normal, particularly for the economy. What we're suffering now, future generations will have to pay for, and that's not the legacy I want to leave for my family, friends and the people of this great country.

"Realistically we have to aim in my view for the end of March to be back to normal. That means a colossal number of vaccinations need to take place. We cannot take this one small step at a time, we have to go flat out. It's a logistical nightmare, but we don't have the time not to do this properly. Every day we waste means it's going to be even more horrific for future generations."

Hearn was particularly critical of the government earlier this month when fans were only allowed in to Alexandra Palace to watch the first night of the current World Darts Championship, accusing them of "throwing sport around like a used doll".

Asked whether he now thinks that given the rising number of coronavirus cases, and soaring death rates, sport taking place without fans present is the safest option, Hearn was bullish.

"When we talk about safety, we are now going through another peak, so we are about as safe as we were nine months ago," he said. "So what progress have we made? We can only speculate, and we speculate through ignorance, which is not a good sign.

"I understand we're in strange, unique times. Hindsight is always a good advisor, and the government has got an impossibly tough job. But what we all need is clarity, and clarity is something that has been very much absent.

"These wonderful advisers that seem to come out with doom and gloom every time they open their mouths, it's depressing isn't it? We've got to keep positive. We need to have a plan, and we need to stick with a plan.

"Some of the advice we've had from the experts has changed so dramatically over the last nine months, I'm not sure who is an expert any more.

"Let's park that for now, because that is history, what we have now with the approval of the Oxford vaccine is an opportunity to get back to normal. We must throw every bit of resource on this vaccination to get it carried through. The test of government is leadership. That leadership is now required."

Despite his continuing frustrations, Hearn accepts that sport will likely have to continue behind closed doors for weeks and maybe months to come. But he does believe that come early spring, full crowds will once again be able to attend events, including snooker's World Championship, which he confirmed will definitely take place at Sheffield's Crucible Theatre. 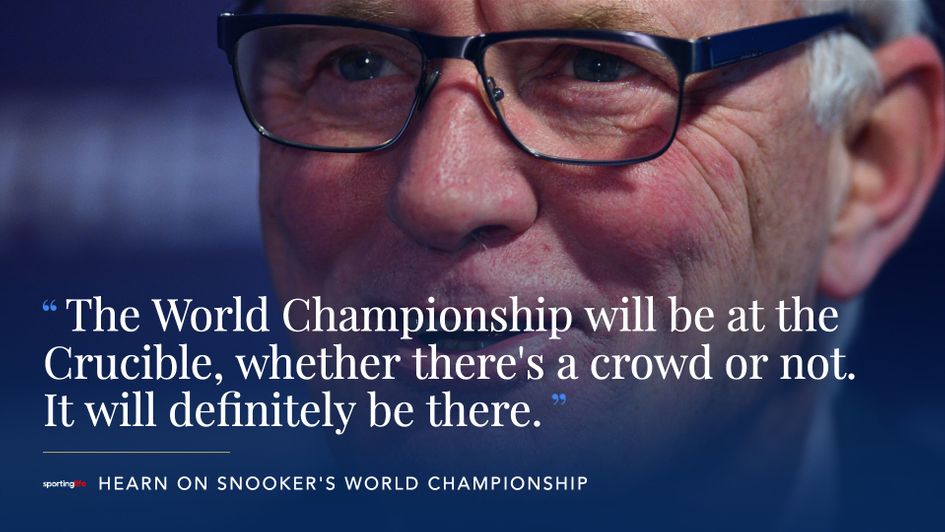 "Hopefully by then there will be crowds, with my master plan that by March 31 we will be back to normal," he said. "And I mean no social distancing, that's how normal we need it.

"The World Championship will be at the Crucible, whether there's a crowd or not. It will definitely be there.

"Once we get past Easter, that's where I'm keeping my fingers crossed that the job has been enough done that we can return to normality.

"Part of our planning is continuing as if nothing has happened. That means the darts, snooker, boxing and everything else will carry on. We're talking Masters darts at the end of January, Masters snooker in January, the ping pong World Championship in January, and so on.

"If it has to be behind closed doors ok, but make sure it takes place. We need it. Some people don't like sport, but the vast majority find sport to be a unifying factor, we need it for our mental health.

"We are treading water, we need the energy of live crowds back. But that's out of our control, it comes down to the government as I say to roll this vaccine out and give us all a fighting chance."

After the Masters in January, snooker will return to Milton Keynes for the German Masters, Shoot Out and WST Pro Series. Asked if he believed every event up until the World Championship will be held at the Marshall Arena, Hearn said: "I think there's a very good possibility of that.

"I'm thinking to myself, we've got to get through without cancelling an event, without cutting prize money, without lowering our standards to the end of March.

"I hope we're back to absolute normality by Easter, no social distancing, full crowds, that would be my best guess. Until then I'm resigned to the fact that Milton Keynes will get a lot of use. It works there. We're getting the television audience numbers we want."

Hearn admits he will always have a unique affection for snooker - one of the main reasons he returned to the sport in 2010 - while he is particularly proud of the incredible growth that has taken place in darts.

"I owe a debt to snooker, I'll put it as strongly as that," he said. "Snooker started me off. Steve Davis winning the world title in 1981 (when Hearn was his manager) changed my life. Snooker has always been there.

"Darts is a really important member of the Matchroom family because we turned it from a pub game to a global phenomenon, and that's been such an exciting journey.

"My involvement has been up and down in boxing, through Eddie (his son) we're seeing boxing being taken to a level that it's never been before. That's always been our plan, whether it's netball or fishing, we always just want to be the best we can be.

"We built a business underneath a billiard hall in 1982 with two people into the biggest sports promotion company in the world. That's a sense of pride, but also a sense of responsibility." 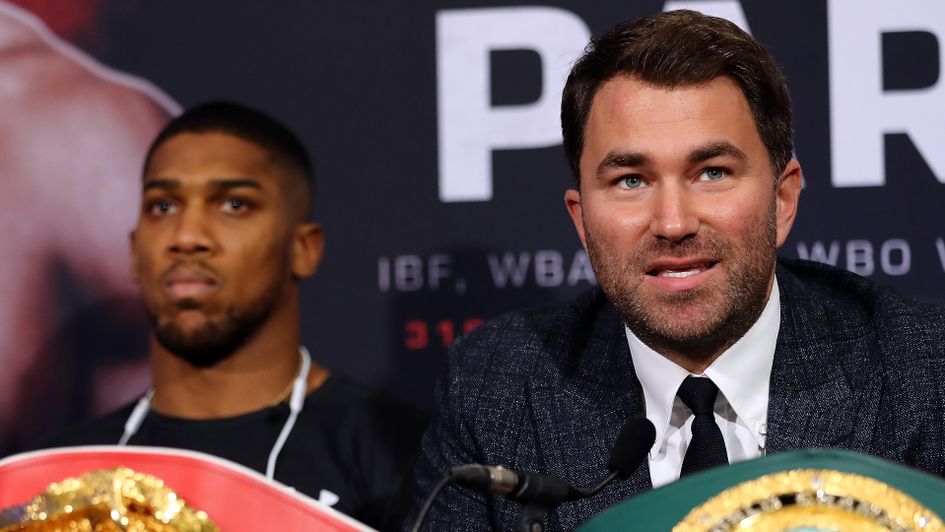 Hearn also revealed that he intends to slowly step away from his duties in the coming years. Asked if he had the inclination to carry on indefinitely, Hearn said: "Probably not. I'm 72 now. I've created a management structure throughout all of our divisions with really energetic, passionate people. It's coming up to being their time now. Like Eddie in boxing I have people that can take the sports that I love to the next level and that's exciting.

"They'll never lose me sticking my nose in, until the good Lord takes me, but over the next months and years, I'll be more of a floating animal rather than a hands on, operational animal, because I've got better people than me to do this job and carry forward the dream I've always had of giving people, and particularly working class people, the opportunity to change their lives."

Hearn also took the chance to pay tribute to two important people in his life. "My mother was a massive influence, she was the one that forced me to try and improve myself. She had the drive, she always wanted better. Jealousy is wrong, but the desire to improve yourself is 100 per cent right, and I think she instilled that in me.

"My wife Susan has been single minded, a tough cookie, that believes in family values, keeping your feet on the ground and not getting carried away, which can happen, particularly with people like me. I tend to open my mouth too often sometimes. It's that belief you have in yourself that comes from those working class roots, you're grateful for the opportunity and you're not going to let it go to waste.

"That's the cornerstone of my whole life, I've not wasted a second of my life, thats the most important aspect of my entire existence."

Hearn has always been one to focus on the positives. But he finished by reflecting some more on how turbulent 2020 had been for him, and was as forthright as ever. "I've had a bit of a s**t year," he said. "I've had a heart attack, I've had Covid.

"Covid is not nice, it is horrible. l was one of the lucky ones. There are a lot of other people that haven't been so lucky. That's why this vaccine is so important.

"Getting the OBE makes me feel 20 years younger. If it's for what I've done for sport over 45 years, it's a compliment on hard work and discipline and credibility and integrity and I accept it.

"If it's for Covid it's for that sheer bloody mindedness that we've all got in us because we're British, and we're part of the greatest country in the world, never to give up. Every time we have a knock down we brush ourselves down and go back to the fight.

"The greatest compliment may well be how we've coped with Covid. We've refused to surrender. No retreat, no surrender, we've maintained an amazing creative work ethic to make sure that sport stays on our screens.

"I'm very proud of the effort we've made. We could have rolled over and gone to sleep for a year. That's not our style, we stand our ground and fight for what we believe in. The way we've handled Covid has been a massive success story for British ingenuity and that desire never to give up.

Commanders of the Order of the British Empire (CBE)

Order of the British Empire (OBE)

Members of the Order of the British Empire (MBE)