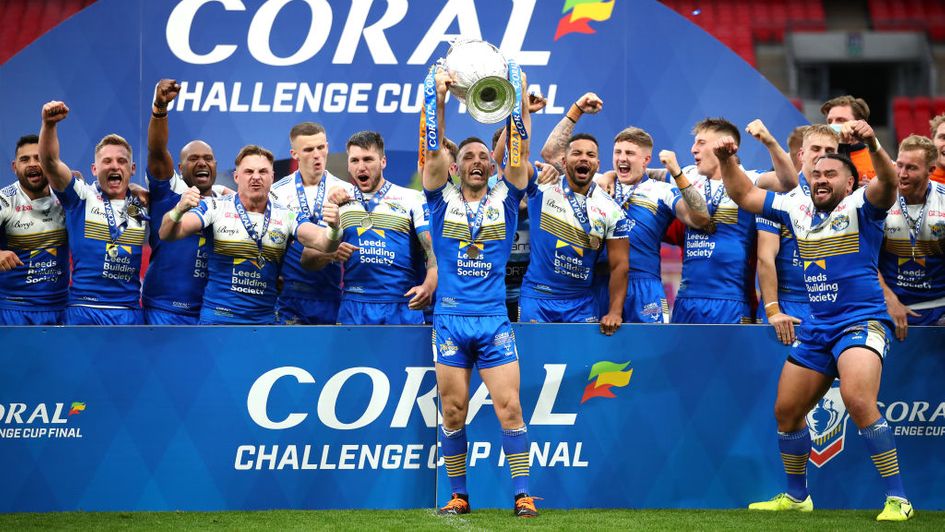 Leeds captain Luke Gale is hoping his side’s Challenge Cup triumph put a smile on the face of his predecessor Rob Burrow.

Former scrum-half Burrow turned down the opportunity to attend the final at Wembley as he continues his battle with motor neurone disease (MND) but was chief guest in absentia and proved to be an inspiration behind his club’s 17-16 win over Salford.

Gale, who won the game with a drop goal five minutes from the end, said: “It’s fitting that I’ve got his number seven jersey. I know he will have been watching and I hope we did him proud.

“I said when I first came to Leeds, which was about the time Rob was diagnosed with MND, that if I could do half as well as he did and play the way he played week in, week out, I would do myself proud and do Rob proud.

“It’s been a tough week, we all watched the documentary and he’s heroic. I hope we put a smile on his face today.”

What a final. So pleased for @leedsrhinos. Thought @SalfordDevils gave a great effort. Enjoy the night boys. #MOT

Leeds coach Richard Agar said: “Rob is with us in spirit, he’s an inspiration all the way.

“We did it for Rob and it’s Gale, with Rob’s number seven on his back, who came up with the big play.

“It makes you wonder if it’s in the script somewhere along the line, if you believe in that stuff.”

Leeds led 12-6 at half-time but Salford, who were appearing in their first Wembley final for 51 years, hit back with two tries in six minutes through James Greenwood and Pauli Pauli to go in front for the first time.

Winger Ash Handley then scored his second try of the match to level the scores and Gale came up with the winning point five minutes from the end to secure a 14th Cup win for the Rhinos and leave the Red Devils still waiting to add to their solitary success in 1938.

“We knew they wouldn’t go away but we started the second half in terrible fashion and I never felt we quite got ourselves back in the game.

“There were a couple of times when we looked gone. I felt our spirit got us through in the end. I didn’t think it was a great performance.”

In guiding Leeds to their first Wembley success since 2015, Agar has emulated the achievement of his father Alan, who took Featherstone to Challenge Cup final glory in 1983.

The victory completed a remarkable transformation under Agar, whose first game in charge of the Rhinos last year was an embarrassing cup loss to Bradford.

“For myself and my father to become the first people to do this, from a little rugby-mad mining village, is poignant for us,” he said. “I got a bit of emotional at the end of the game.

“But it’s not about me. I just wanted our blokes to win after the way we stuck together and rode out some bad times together.

“We were bundled out by Bradford last year so it’s a resurrection for us.”

The Lance Todd Trophy for man of the match went to full-back Richie Myler, who has enjoyed a remarkable turnaround in fortunes after struggling throughout 2019.

“I’m overwhelmed,” he said. “Where we came from as a group, when we lost to Bradford 12 months ago, we have a special group who work hard for each other.

“I’m a bit emotional but that group of boys deserve everything.”

Salford’s Wembley defeat comes just over 12 months since their lost a maiden Grand Final and coach Ian Watson is now hoping they can regroup and finish the season on a high.

“It’s devastating to lose,” he said. “It’s small margins, we could have done certain things better to win it.

“There were a few turning points in the game but I did think when we scored that it would be our day.

“We just needed to be composed and close the game out.

“It will sting, it’s already stinging in there for there are some players at the back end of their careers, like Mark Flanagan and Kris Welham, even Kev Brown is not getting younger.

“You don’t know if you’re going to get here again so it was important for us take that opportunity.

“We’ve now got to move forward and finish the season well.

“We’re desperately disappointed and that shows how far we’ve come as a group, we kind of backed up the Grand Final and it’s up to us to keep trying to build.”