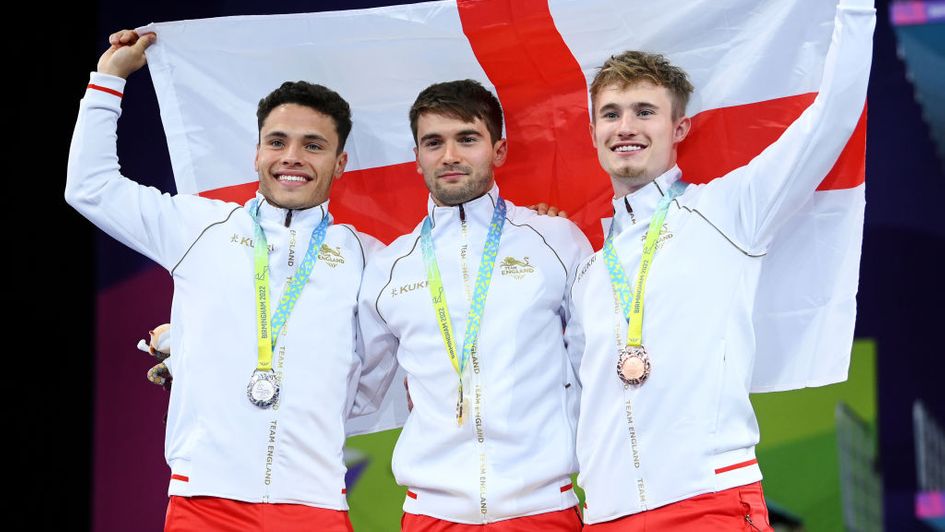 England swept the board on Saturday night

Jack Laugher was pleased to have bounced back from a zero score in qualifying to claim bronze in an English one-two-three in the men’s 3m springboard final, admitting something like that could have “ruined him” in the past.

Laugher, an Olympic silver medallist in this event in Rio six years ago, has been open about his struggles with anxiety over his performances and scored zero for his first dive in the preliminary round on Saturday morning after the nerves set in on the board.

Dan Goodfellow took gold for England with Jordan Houlden securing silver on Saturday night, and Laugher – who recovered to reach the final as the 11th-ranked of 12 qualifiers – was delighted to join them on the podium after a rocky start to the day.

“I feel like maybe a year and a half ago before the Olympics that (zero) would have completely ruined me and sent me in a bit of a spiral,” he said.

“I thought that maybe today would be kind of a big turnaround, a bit of a comeback story and it kind of is in a way.

“Even though there was some massive negatives, the overall experience has been extremely positive. When you have laid those seeds of doubt in your head, it can be quite hard. But I’ve been working with a psychologist and I’ve now got things in place that I can do.”

Laugher, who went to sleep after the morning session to help him “reset”, led at halfway but his fifth dive, a forward four and a half somersaults tuck, saw him score just 53.20 and slip off the top.

Goodfellow nailed his fourth dive – the one with the highest degree of difficulty in his routine – to score 91.65 on that dive and 484.45 altogether.

Goodfellow, who was born in Cambridge but is based at the same City of Leeds club as Laugher, said: “I’ve had a rough year and probably a few people have doubted me, so to come here and do this…I’m just really happy.

“To come here and win gold, I wouldn’t trade it.”

Houlden, from the City of Sheffield club, said he was “speechless” after his silver medal.

“I couldn’t be happier with my performance. It’s beyond belief. I couldn’t expect any more,” he said.

“The crowd went crazy and I just fed off the crowd, it was really energetic and I loved it.”