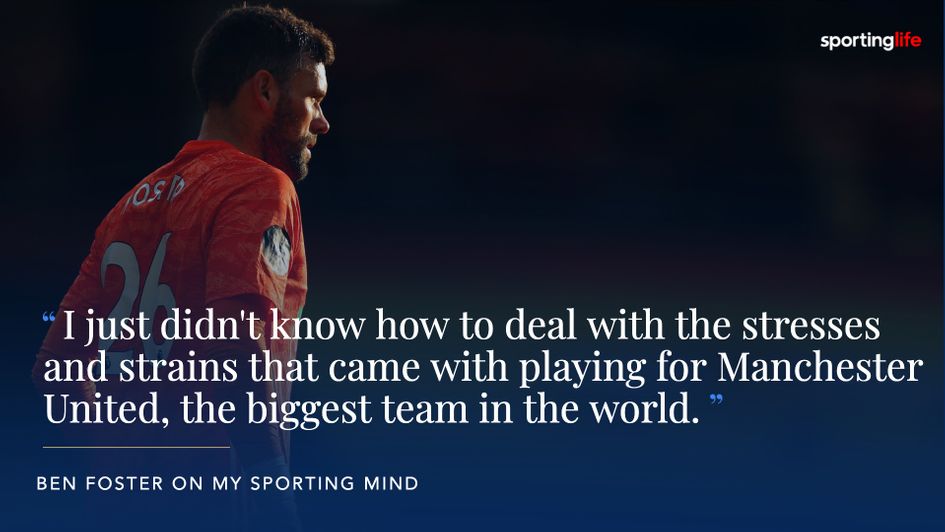 Sporting Life has partnered with My Sporting Mind - below we hear from Ben Foster, a guest in series one

Sporting Life has announced its partnership with the My Sporting Mind podcast. Ahead of the second series, we begin our look back on the highlights from series one with a fascinating chat with Ben Foster.

Foster is into his 19th season and has experienced everything from the highs of silverware, play-off promotion and playing for his country, to the lows which came from playing for one of the biggest clubs in the world.

From his position in goal, he knows all about the pressures of professional footballer whose every mistake is magnified, a fact which was brought into sharp focus when he signed for Manchester United for a fee of £1million at the age of 22, his experience prior to that limited to English football's lower leagues.

Within a year, Foster had been hailed as 'the best goalkeeper in the world' by Watford manager Aidy Boothroyd, during the first of two loan spells with the club where, almost two decades later, he is a key part of their promotion push in the Sky Bet Championship.

That was just the beginning of his experience with a new kind of pressure, as back at United a string of mistakes once he graduated to first choice saw him depart after just 12 starts. For many, that would have been the start of a spiral down the divisions. For Foster, it was part of a process which has seen him produce some of his best displays in his late-30s.

About My Sporting Mind

Broadcaster Charlie Webster is joined each week by a special guest to talk about their mindset, discussing both the highs and lows of their career, the impact on their mental health, hearing previously untold stories and exploring what they’ve learned along the way - listen to series one and subscribe for season two, and you'll learn about the person behind the public persona.

Along the way, he has developed an appreciation for looking after his own mental health and now reflects on his journey, and the lessons he's able to pass on to those experiencing times of struggle.

"When I was younger I used to get this real anxiety, where I'd know somebody and I would be chatting freely with them, and then I'd walk away, and something would pop into my head and it would make me feel anxious. And I literally couldn't talk to that person that I'd just had a conversation with! It was nerves, crazy nerves... pure self-doubt."

That doubt intensified at United, where Sir Alex Ferguson saw something in him and yet that faith was not enough to rid Foster of his inner struggles, proof that sportspeople are no less prone than the rest of society when it comes to dealing with pressure.

Mistakes in the 2009 Community Shield and high-profile clashes with Arsenal and Manchester City made for a nightmare start after a long wait to replace Edwin van der Sar. Within months, his chance to establish himself at arguably the most recognisable club in the world was over, a dizzying and damaging run affecting his form and confidence.

'Any advice I can give to anyone, is to just be comfortable in your own skin. You can only be you'

"It was a massive low point in my career, but it was the best learning experience I've ever had in my life.

"Back then (early in my career) I'd make mistakes and I'd always try and blame somebody else. It's like every day I'd put a mask on and come into the training ground. As soon as I got out of my car, the mask would go on, and it's a different version of me. And it was just hard work.

"Imagine doing that, all of your life? There's people that do it now. And it must be hard work. It was just too tiring for me. I had to learn to just be comfortable in my own skin. I am what I am, I know my limitations, I know my capabilities, and that's it. I live my life. I know I'm a decent bloke, I'm a nice person, and if someone doesn't like me for whatever reason, then that's not my problem. I know it isn't my problem."

The goalkeeper is unique in a football team - the person who can spend long periods far from the ball, at the quiet end of the ground, forced to maintain concentration and block out the noise around them, which can include travelling fans and everything they throw at the man between the sticks.

For Foster, it's taken time to accept that those in the stands are simultaneously vital to the sport and its power, but secondary to his own friends, family and loved ones when it comes to who he should be listening to.

"It's something that you learn to live with and I've learnt as I've got older, this is their stress release. It's not right, and I disagree with it, and I don't think it's a good thing that people are allowed to do that, but this is how fans relieve themselves on a Saturday afternoon.

"I'm very good at (blocking it out). I know I'll never see that person again. I've learnt to try and even have a laugh with it. If someone comes up with something that's clever, I'll honestly turn around and go 'very good'. If you let them know it's getting in your head, they'll just feed off that."

My Sporting Mind: Series one

Links to iTunes - scroll down or search for other podcast providers

Foster, who went to the 2014 World Cup and has eight England caps, blames social media for its role in placing pressures on young people - inside and outside of sport - as they grow up in a world where interaction with people they do not know and have never met becomes commonplace, something he sees inside the Watford dressing room.

"Kids nowadays, they live their life on social media. It's not real - it's complete crap. We'll finish a game, no joke, the second they (young professionals) do they'll pick their phone up, and they're straight on twitter. They're not looking at messages from their friends and family, they're looking at people they've never met before, and that will have a bigger bearing on their mood than the people that actually matter.

"In the age of Instagram and twitter, where people just show off 24/7... it's an absolute devil. For young people who don't know how to use it in a good way, it can be a problem.

🚨 We’re so delighted to announce the support of @SportingLife 🙌

"When I was younger I used to get this real anxiety, where I'd know somebody and I would be chatting freely with them, and then I'd walk away, and something would pop into my head and it would make me feel anxious. And I literally couldn't talk to that person that I'd just had a conversation with! It was nerves, crazy nerves... pure self-doubt.

"My lips used to get nervous and twitch, and I thought they could see my lips twitching, and they could see I was getting nervous, and then I would just clam up, and it was a horrible situation. Then you get to the point where you think: 'I don't want to go and see anyone else, because I don't want that horrible situation to happen again'. Then you start to withdraw, and then you're in a whole spiral of crap. It's a horrible feeling.

"The best part about getting older is you learn to not care, and if you can do that from an early age, oh god you would smash it! If you learn to let people take you as you are. Not put a show on.

"It just comes back to knowing your own self worth. As long as you know you're a good person, do nice things, have time for people, be respectful to people - all that stuff."

His advice in a noisy world, where feedback is constant, where so much is performative, where the impact of the coronavirus pandemic is set to be felt for years to come, is the same a coach might give to a struggling sportsman - get back to basics.

"You just need to be happy with who you are, and what you've got, and not be jealous of other people, and want what you can't have.

"It's just a waste of energy. Just enjoy the people around you, your family, the people that want to be around you. Don't try and crave the stuff that is just crap."

My Sporting Mind podcast is available through your normal podcast provider, including:

For anyone struggling with their mental health, or just feeling the need to speak to someone and be heard, then call free and anonymously: