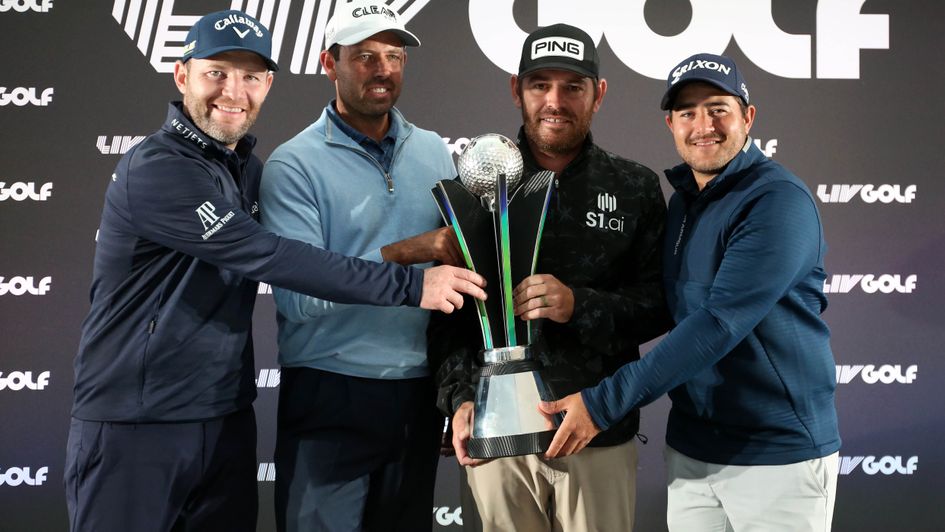 A delighted Stingers side after winning the first LIV Golf event

Let's for a moment forget where the money comes from. Let's forget, just for a moment, what the money is for. Let's forget Saudi Arabia's execution of 81 men on March 12 and its detention of women who dared protest that they had been sexually assaulted. Let's forget the toll of the war on Yemen, which the UN estimates had killed 377,000 people by the end of last year. Let's forget about 9/11. Let's forget – not because that's what they want us to do, but because it allows us to sweep aside the whataboutery for a moment and look at what's left.

The first LIV Golf Invitational, labelled 'London' despite being played in Hertfordshire, finished on Saturday, and from a sporting perspective it was a farce. Its vaunted team element didn't work. None of the handful of big names made a significant contribution. The shotgun start failed to improve the experience. Promised broadcast innovation meant a leaderboard which often told us what had happened before we'd seen it, and paid-for propaganda which your average despot would've considered a little on the nose.

Charl Schwartzel led after round one, something confirmed long after he'd finished, and was never caught. Schwartzel's reward for beating a player just below him in the world rankings is four million dollars, a fact which could not have escaped anyone watching as commentators excreted some variation of the word money either before or after each shot. Otherwise, Schwartzel gets nothing: no major starts, no ranking points, no exemptions, and no change to his prospects of playing for his countryman Trevor Immelman in this year's Presidents Cup. Those are the things he gave up in joining the LIV Golf circus.

And it was, from the beginning, a circus. From malfunctioning equipment at the faux draft, itself rendered pointless by the tournament, to the total absence of live scoring throughout the first day, this was a grim exhibition which started badly and got worse. Come Saturday's final round, the question was would Schwartzel win as expected or might Hennie Du Plessis or Peter Uihlein catch him. When Greg Norman signed up to be the face of LIV Golf, such a scenario would've been close to worst-case. Nobody, not even Schwartzel, really appeared to care.

If there was a success story, it was the size of the crowds – vast numbers of them given free tickets after the original pricing proved as popular as a Graeme McDowell interview. Perhaps YouTube numbers qualify as another success, around 100,000 tuning in for the first round and a similar number at the conclusion of the third. Then again, about eight million watched as a plane landed in a storm a few months ago. Success, like much of this, is a subjective matter.

Objectively, there were all kinds of issues with the format and the way it was presented.

Showing more shots for instance is all well and good, but when you've only got 48 players, and most of them aren't playing well, there aren't many shots of consequence. During Saturday's third round, Richard Bland appeared on screen, putting from long range. The caption said 'this from earlier'; the putt never looked like going in. In some ways that's a nice change from the inevitability of what we're used to, but mainly it shone a light on what we all know, but nobody there would admit: what consequence there was related only to money.

No, this isn't about money. It's about a new, exciting format, and the chance to play team golf again. Those teams were determined at a draft in London, except for two: South Africa (Stingers) and England (Mavericks), which had been pre-agreed. These were the two best teams on paper, undermining the very purpose of the draft, and they finished first and third, Stingers winning by 14 shots. During the final round, Schwartzel and Du Plessis were ostensibly teammates whose sole focus was beating each other, sort of like Mickelson-Woods for a Channel 5 audience.

And what of the idea that the captain of each team would select which scores are going to count? That, like the notion of securing a young, exciting, relevant member of the sport's elite, had to be scrapped, presumably because the people behind it came to realise what an utterly stupid idea it was. At least that spared Torque GC's captain, Talor Gooch, from having to go through the ritual of not picking Andy Ogletree each day. That's no disrespect to Ogletree, it's just there's never a scenario in which picking the worst golfer would make sense.

These weren't the only team issues. We have the names, of course, none of which are good, several of which are actually very difficult to say let alone remember. But above all else, I found myself wondering what happens at the next draft. If captain Gooch gets to go first, can he select Bernd Wiesberger, as McDowell did last week? And if he can, how many teams exactly is Wiesberger allowed to represent during the eight-event season, which does he play for in the match play finale, and how does this engender rivalries? Call me negative, but what with none of the players wearing their team merchandise, I'm beginning to have my doubts about the validity of the team competition.

But the shotgun start! Of course, what brilliant innovation to bring a staple of the club game to a worldwide audience. Except it means players finish their rounds all over the course, without any way of knowing what's going on elsewhere. It means that instead of spreading out a series of key moments into a full scene, we have the prospect of too much happening at once. Schwartzel's dominance denied us a chance to witness this, but it will happen. And it will not be as dramatic as a player standing in the fairway while someone up at the green makes a putt which changes things. They'd have been far better all teeing off at the first and playing nine or 12 holes, but whatever.

As for who will even be involved next time in Portland, who can say. We know now that Pat Perez and Patrick Reed will join Bryson DeChambeau and probably a handful more PGA Tour golfers willing to forgo their membership, and go back on what they signed up for. That is their prerogative. Beyond those few additions revealed this week, the only other thing we know is that something has to give. LIV Golf has made much of its 48-man, 12-team format, but nobody seems to be asking who makes way for Perez, a 46-year-old who conceded during his initiation interview that he's getting in because his mate Johnson put in a good word.

Finally, the commentary, hosted by Arlo 'someone in Chicago is after me' White, who at times appeared like the first he'd heard of golf was last Monday. Alongside him were former Golf Channel stalwart Jerry Foltz and Asian Tour commentator Dom Boulet, whose knowledge of the lesser-known players made him a good addition. Or at least it ought to have done. Whenever I watched, all chance to educate, to explore, was wasted in order to cackle maniacally whenever a remotely good shot was hit, and then quickly mention what it might be worth in US dollars.

Good commentary wouldn't have rescued this, but it might have helped.

Saturday's final round, the only one I sat through, was a conveyor belt of nonsense, which I'll try to sum up quickly. First, just after I'd tuned in, someone said 'it's a masterclass from Schwartzel and Du Plessis', who at the time had played seven holes each and hadn't made a birdie. Soon after, 'everyone has been making birdies today' was our intro to the latest 'Don't Blink' highlights package, except that over a third of the field hadn't yet made a birdie.

It got much, much worse. 'We could see a two-shot swing!' said Boulet, keen to galvanise interest in this strange head-to-head, only for Foltz to interject with 'only on the individual leaderboard... they're on the same team'. Jerry, mate, nobody cares about the team element. I cannot stress this enough. There really were no teams this week. Hisnibs is an illusion.

This wasn't Foltz's finest moment (this is finest as in worst, because I'm trying to write for the YouTuber who loves golf now). That came later, when put on the spot by White, who asked what Reed would bring to the LIV Golf 'family'.

And that sums up the whole affair rather neatly. Don't believe what you have come to know, what you have seen. Believe what we tell you, however absurd it might sound. We're saying it, we're saying it loudly, and it therefore must be true. It's how so many of the world's darkest corners operate now, and it's where golf might be heading if the pot of blood money is deep enough to cover the failings of an ill-conceived series of exhibitions which dilute competition while helping Saudi Arabia achieve its goal of using sport to wash its reputation.

Forgive me, I had promised to do as told and take politics out of the sport. What a pity they took its heart and soul out too.