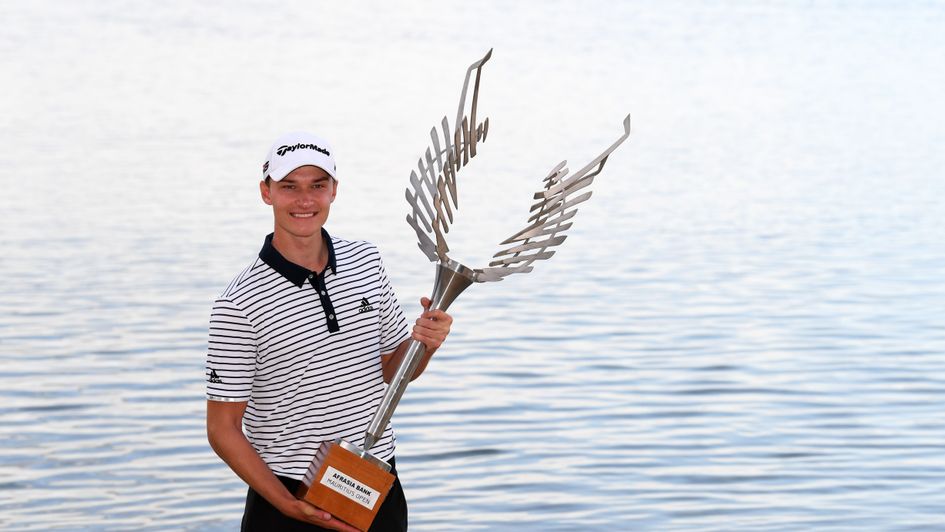 Hojgaard with his trophy

Teenager Rasmus Hojgaard made an eagle on the third play-off hole to claim his first European Tour victory at the AfrAsia Bank Mauritius Open.

Teenager Rasmus Hojgaard made an eagle on the third play-off hole to claim his first European Tour victory at the AfrAsia Bank Mauritius Open.

The 18-year-old fired a closing 68 to finish on 19 under alongside Italian Renato Paratore and Frenchman Antoine Rozner after 72 holes, with Scot Grant Forrest finishing a single shot out of the play-off.

Hojgaard had birdied the par five last on days one and three and did it again on Sunday to make it to extra holes, as Paratore also birdied his 72nd hole to join Rozner at 19 under.

Paratore saw his chances ended as he found water on the first trip back up the last but Rozner and Hojgaard halved the hole twice in birdies before a second shot to 12 feet set up victory for the Dane at the third time of asking.

Hojgaard only turned professional earlier this year and was playing just his fifth European Tour event after becoming the first player born in the 21st century to make it through the Qualifying School.

He played alongside identical twin Nicolai at the 2018 Junior Ryder Cup and after seeing his brother finish second earlier this year at the KLM Open, Rasmus is now the third youngest winner in European Tour history after Italian Matteo Manassero and Kiwi Danny Lee.

"I can't put it into words. I'm looking forward to the next challenge."

Forrest had been part of a seven-way tie for the lead as he made birdies on the second, seventh, ninth, 10th, 12th and 14th but could not take advantage of the last and finished at 18 under alongside Belgian Thomas Detry, Frenchman Benjamin Hebert and South Africa's Louis De Jager.

Fellow Scot Connor Syme finished at 16 under after a 69.

Scot Calum Hill birdied his final two holes to take a share of the lead into the final round of the AfrAsia Bank Mauritius Open.

The 25-year-old had led by one after 36 holes, but on a day of low scoring he found himself in a tight battle at the top of the leaderboard throughout round three.

A bogey on the 16th saw him drop two shots off the lead, but he produced that big finish to get to 16 under alongside Belgian Thomas Detry and Frenchman Antoine Rozner.

Hill claimed two wins on the Challenge Tour last season to earn his place on the European Tour and is now looking for a first top-tier victory in just his sixth event.

"It was nice to have a couple of birdies to finish off and sneak back into a tie for the lead," he told europeantour.com "Happy with how it finished off.

"The scoring was good out there if you played well."

Hill birdied the par-five second but gave the shot straight back on the next before a hat-trick of gains from the fifth had him back in a share of the lead at the turn.

He flew the green with his second and then played a clumsy chip to drop that shot at the 16th before two long putts on the 17th and last had him back on top.

Rozner also birdied the last in a 66, while Detry did the same in his 67.

Dane Rasmus Hojgaard and American Sihwan Kim were a shot off the lead, with Scot Connor Syme at 13 under and countryman Grant Forrest a further shot back.

Calum Hill move to the top of the leaderboard after a brilliant second round in the AfrAsia Bank Mauritius Open.

The Scot, playing in his second event as a European Tour cardholder, fired an eight-under par 64, the low round of the week so far, to post a 12-under halfway lead.

Brandon Stone continued his bounce back from last week's disappointment to reach 11-under after a 67, while Hill's compatriot Connor Syme rattled in five birdies over his final six holes to move into a group on 10-under, two off the lead.

Late in the day, Thomas Detry added a seventh birdie to the eagle he made at the 14th hole to join Stone in a share of second alongside France's Matthieu Pavon.

Hill started off with a birdie at the 10th and added four more over the back-nine, before back-to-back birdies at the second and third saw him move onto the heels of Stone.

When Stone made a rare mistake at the eighth, Hill ensured a place in Saturday's final group with a lengthy birdie at the ninth as his fine start to life as a professional continued.

Stone birdied his first two holes to take the lead and spent most of the morning out in front, with a four at the difficult, par-three eighth costing him that position. Nevertheless, after failing to threaten at his beloved Leopard Creek a week ago, this was much more like the player who had previously finished runner-up in Portugal.

Detry meanwhile shrugged off a slow start with birdies at the fifth, sixth, seventh and ninth, before an eagle at the 14th fully ignited his bid for a solo breakthrough on the European Tour.

Detry won the World Cup with Thomas Pieters last year, but individual silverware has so far eluded him. Birdies at the 15th and 18th holes to cap a round of 66 put him on track to end the search, though with so much talent in the mix, it won't come easy.

Several of the market leaders made bright starts to the AfrAsia Bank Mauritius Open, where Benjamin Hebert is part of a five-way tie for the lead.

The Frenchman has been on the wrong side of three play-offs this year as he seeks a European Tour breakthrough, and any hope that a six-under 66 would pave the way for a straightforward week will have subsided with a glance at a compact leaderboard.

Hebert shares the lead with compatriot Romain Langasque, as well as Brandon Stone, Grant Forrest and Rasmus Hojgaard, the latter the first to sign his card having earned it at Qualifying School.

Just 18 years of age, Hojgaard has a bright future - just like his twin brother, Nicolai - but it's Stone and Langasque who head the betting after the opening round.

(and Rasmus Hojgaard is probably not even the best teenage golfer in his family - his twin Nicolai might be better!)pic.twitter.com/hsq65n4BK7

Last week, Stone was heavily backed only to disappoint in the Alfred Dunhill, but he's evidently back in the sort of form which saw him take second in Portugal before that - although he had luck on his side, too.

A snap hook off the final tee looked sure to cost Stone at least a shot, but his ball bounced out of trees and, when he holed a long putt across the green, he'd in fact picked up another to join the lead.

Playing alongside him, Langasque's birdie was more straightforward as he continued his fine record in Mauritius and at this course in particular, one for which he's an ambassador.

French players have tended to go well in Mauritius and Antoine Rozner is another in the mix on five-under, part of a massive group which includes South African duo Christiaan Bezuidenhout and Zander Lombard.

As with Stone, Lombard had fortune on his side with a chip-in finish to his round, which ended with a birdie on the ninth. Perhaps, after a triple-bogey to end last week's event in seventh, he was due a stroke of luck.

Forrest, in a share of the lead one year after taking seventh in the event, was encouraged by more positive steps on the course.

"The game is getting there," he told europeantour.com "We've done a lot of work over the past few months and it's been a bit of a struggle on the golf course but we're starting to see signs now.

"I was fortunate enough after the Scottish Open that I had my card locked up for this season and it just felt like it was time to make a couple of changes to prepare for this season.

"When you do that you have to be prepared for a bit of a slump. It certainly was towards the end of the season. That's golf - the progress is never a straight line, it's up and down and you just hope that you can go more up than down in the long run."