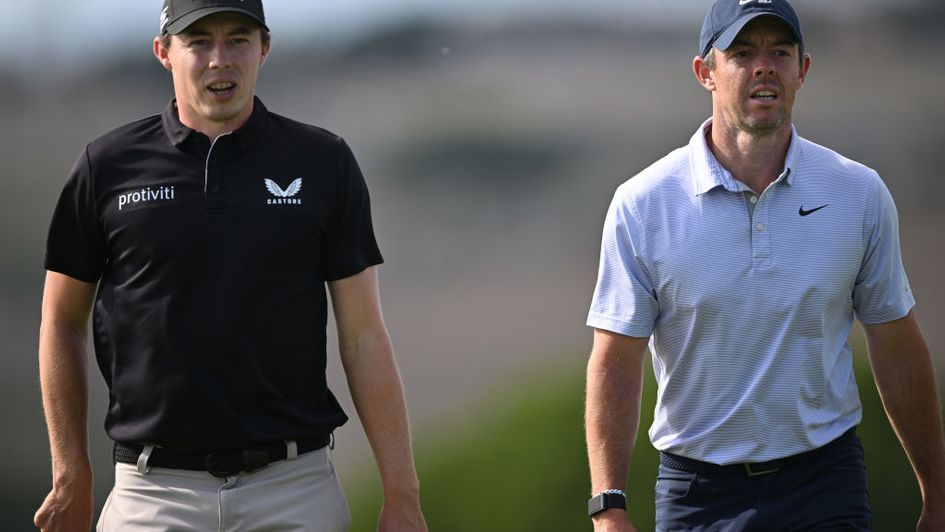 Who will come out on top in Rome?

Golf betting tips: Best bets for the final round of the Italian Open

Matt Fitzpatrick and Rory McIlroy dominate the betting heading into the final round of the Italian Open. Ben Coley looks ahead to what should be a thrilling Sunday.

It would be fair to say that, for the second week running, class has come to the fore on the DP World Tour, where Matt Fitzpatrick leads the Italian Open by a single shot with a round to play.

Fitzpatrick is the third-highest ranked player in a field lacking depth and RORY MCILROY, tied for second, is of course the highest. Viktor Hovland hasn't fired but is still mid-pack, Tyrrell Hatton is ninth, and Lucas Herbert and Kurt Kitayama (fifth and seventh respectively in world rankings among this field) are tied for fourth.

All of which makes for something of a Catch 22 for organisers. There's no denying that the desired outcome this week was for McIlroy to contend, ideally with someone like Fitzpatrick, so it's mission accomplished there. However, for the DP World Tour this is a stark reminder that their rank-and-file are some way behind those who also own PGA Tour cards.

That much is obvious but seeing it written so boldly across these leaderboards has been jarring. Nevertheless, dealing with what's in front of us the stage is very much set for an absorbing final round in the second of three tournaments at this course, before it does what it was built to do and hosts next year's Ryder Cup.

Captain Luke Donald may hope that come next September, he gets a good and prolonged spell of the wind which changed the complexion of this event on Saturday. When it blew it really blew, emphasising how exposed Marco Simone is, and it's fortunate that players were turning for home and facing the easier nine holes when it did arrive.

That allowed Fitzpatrick to secure due reward for his patience and take the lead from McIlroy, who made little. All three of the latter's birdies came from inside six feet, a distance from which he missed when giving up a shot and change at the par-five 12th, and it was reminiscent of last Sunday at Wentworth. The difference is that this time he gets the chance to make amends.

Setting up his first birdie of the day and moving to -10 👌 #DS79OpendItalia pic.twitter.com/VV6U8ekhSZ

The market can't split them at the time of writing and the second week running I'm inclined towards McIlroy, who is at the top of his game and will know that anything short of a win would be scant reward for the way he's played over this fortnight back in Europe. Significantly, there is no wind in Sunday's forecast and his higher ball-flight gives him the edge.

Fitzpatrck admittedly has a fabulous record from the lead, winning two from four when clear and five from nine when either alone in front or sharing. Even more impressive is the fact he's never shot worse than 71 across these nine events and that the worst he's finished is second. He's been virtually unshakeable and a one-two for the big names remains very much on the cards for all the leaderboard has compressed.

Aaron Rai (one back), Kitayama (two), Herbert (two) and Victor Perez (two) are all dangerous as might be Robert MacIntyre with a little more freedom so there is scope for a party pooper, and I'll be hoping it's not Perez. It would be the second time this year the Frenchman has won a week after making the pre-tournament selections, as both he and MacIntyre did last week.

Herbert is the most decorated and probably the most motivated, too, as he was annoyed to have been left out of Trevor Immelman's Presidents Cup side despite having achieved more than at least two team members. He relished tough third-round conditions and his long-game is coming back around, so this dynamite putter is the one to look to if you believe the winner will come from outside the final three-ball.

As for the best bet among the 26 groups, NICOLAI HOJGAARD has conditions to suit and can outgun Spanish pair Gonzalo Fernandez-Castano and Adrian Otaegui (0846 BST).

It's a good draw for the latter duo, not only being Spanish but with (ex-?) LIV defector Otaegui receiving the support of his compatriot. However, Hojgaard has played much better than his score for my money, generally coping well with a marquee group and missing chances galore until failure to deal with those winds cost him late on Saturday.

Now out of contention and will a calm Sunday in store, he can do as he did early in the tournament and remind us all exactly how best to go about attacking Marco Simone – with as many drivers sent as far towards the green as possible. Without wind, that looks the way here and while Fitzpatrick has gained speed and distance, he'll still find himself playing his approaches before McIlroy.