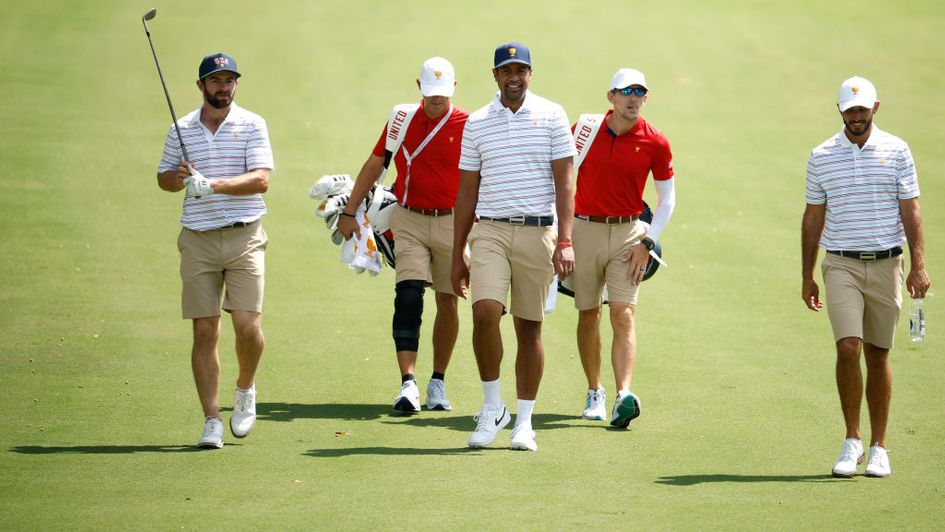 The Presidents Cup gets under way this evening and it could be the start of a long week for the International underdogs. Here's our preview of all five foursomes matches.

On Thursday, Davis Love III deferred his opening pick, forcing Trevor Immelman to go first. It's unlikely that changed much. Immelman went with his two most experienced and decorated players, and Love did what he was always going to do and sent arguably his most established front-running team out to face them.

The result is a match which could set the tone for the entire week. If Cantlay and Schauffele steamroller the only two major winners they're up against, they'll strike a blow from which their opponents may struggle to recover. But if Matsuyama and Scott can get the first point on the board, suddenly this underdog story might have legs.

I think they'll struggle. Cantlay and Schauffele are 4-0 in foursomes together and also won the Zurich Classic of New Orleans in the spring, a tournament which involves two rounds in this alternate-shot format. They've both enjoyed fantastic seasons and are about as reliable as golfers come. Beating them will take an extraordinary performance and it's a worry that Matsuyama has one just one of six foursomes matches so far.

Another established US pairing next as Spieth and Thomas reprise their Ryder Cup partnership, though this will be the first time they've teed up together in a Presidents Cup (2-2-0 in Ryder Cup foursomes). The format is one Spieth in particular enjoys, having gone 5-0-0 so far in this, and Thomas hasn't lost one either (2-0-2).

That and the fact both enjoy Quail Hollow has to be a worry, but they face a threatening International pairing whose combined excellence off the tee might mean they're capable of applying some pressure. It's also fair to say that Im has been the most consistent and indeed effective of the four over the last couple of months and he's certainly been the best putter to cap that off.

It's possible therefore to pick holes in the US pairing, who have both struggled on the greens. That said they're two of the greatest iron players in the sport, they're major winners including here in Thomas's case, and they're extremely comfortable together. They have to be given the edge, but it's narrow.

Morikawa needed a new partner for what's his Presidents Cup debut, having been paired with Dustin Johnson at Whistling Straits. That formula – his approach play combined with a long, brilliant driver of the ball – has been repeated with Young, who in being named in this first session has surely been given an injection of confidence.

It's fair to say no player could ask for a nicer introduction to team golf, in theory at least. He's playing in the state where he made his name as a college golfer, he gets to tee it up alongside a two-time major champion, his opponents are both rookies, and his team are overwhelming favourites.

Across the tee box is the most exciting rookie on the Internationals side, Kim, and a player in Lee who has at least won two PGA Tour events and beaten members of the US side in doing so. They might just prove harder to shift than many will assume and given that both US players can be prone to poor putting days, and that one of them is ultimately a rookie however talented he is, this match looks tighter than the odds make it.

Close friends and regular practice partners, Scheffler and Burns were always likely to start things off together here. Scheffler needed a new partner after playing with Bryson DeChambeau at the Ryder Cup and that leads to one potential concern – the fact he's yet to play foursomes for the USA as a professional. That, some issues with the putter and a lack of Quail Hollow experience do at least offer hope that he might not be at his best.

Burns hasn't been for a little while, particularly with his long-game, so we've two players here whose weaknesses and strengths are contrasting. How that plays out in foursomes remains to be seen, as it's often been argued that pairing similar players is the way to go. At their best they are that, but right now perhaps they're not.

None of this is to suggest they look especially vulnerable but what I would say is that Davis and Kim have a volatile look which makes betting on this match unappealing. They could suffer an absolute thrashing here, but they're both cocksure talents who make a lot of birdies and have all departments covered when firing.

It's more likely than not that they're outclassed, but there are worse pairings to be throwing into the lion's den. At least their ceiling as a partnership gives them a chance.

Popular duo Finau and Homa seem a nice fit. The latter has no real weaknesses these days and is impressing more and more with each passing month. He won last week and while fortunate, the fact is he now has five PGA Tour titles to his name, one more than Finau. Together they've won four in the last 20 or so weeks.

That's a stark contrast with Pendrith and Pereira, both PGA Tour maidens who've just completed their rookie seasons. Both enjoyed real success in very different ways: Pereira in almost winning a major, Pendrith in steadily working his way up to what have been top-class tee-to-green performances of late.

Pereira's form and the fact both can putt poorly are major worries. No doubt, they can match the US pairing in all other departments, but this rookie duo look extremely vulnerable. Throw in the possibility that things have gone wrong in the earlier matches, increasing pressure on them, and it's hard to look past a USA win to round off the session.

On that, Sky Bet offer 13/2 that none of these five matches reaches the 18th. This would've paid out in the 2017 renewal (i.e. on the day where there were five foursomes matches) as well as the 2013 renewal, when there were six. Effectively this is a five-fold of 1/2 shots and I can see the appeal in a volatile format.