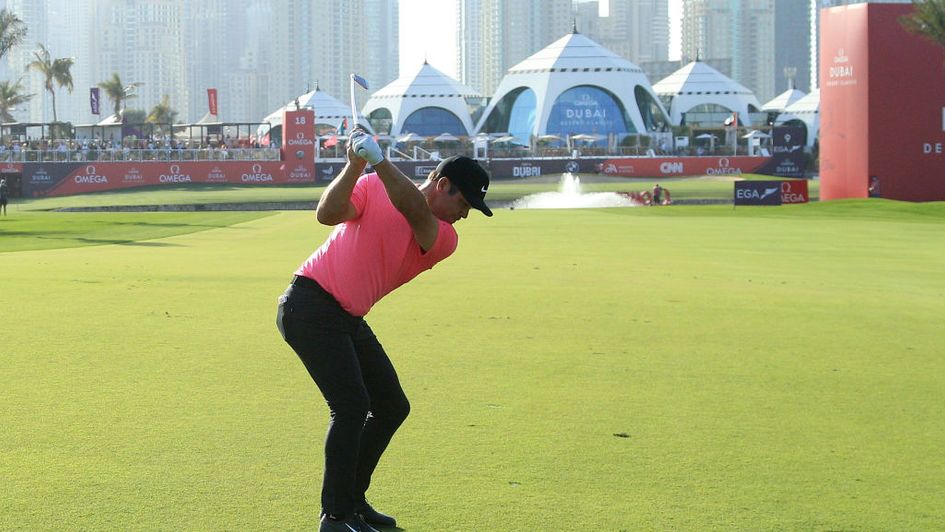 Paul Casey plays a stunning approach to the final green

Jason Daniels expects Paul Casey to go on and win the Dubai Desert Classic, where he has three selections ahead of Sunday's final round.

It's fair to say that the 2020 leaderboard at the Dubai Desert Classic had plenty of inconsistent putters, including eventual winner Lucas Herbert, and the stats through 54 holes of this year's renewal again suggest that the premium asset by far is keeping the ball on the fairway and setting up plenty of chances.

With tiring and unpredictable greens, constant tidying up from the rough will take its toll and the top 12 after the first and second rounds contained players ranked way down in the 50s and beyond in strokes-gained putting. Putting helps as always but the third-round board doesn't contain the best of short-stick merchants and it is clear what is needed to prove successful around the Emirates, where Paul Casey is atop the pile after a final-hole eagle at the end of a round of supreme ball-striking and missed chances before the 18th.

Seemingly very hard to read and often disappointing when fancied in the market, it suddenly seems a little ridiculous that Brandon Stone was sent off well into triple-figures before the event and he now finds himself in third place, two off the leader. A lonely seventh place amidst three missed cuts here says plenty about this enigmatic player, but he has enough links form in the bank including a runner-up finish at the correlating Portugal Masters, and an unfortunate play-off loss in Oman last year.

As befits his heritage, the 27-year-old South African is a confident putter on tougher surfaces and can offer up relevant off-the-tee and tee-to-green stats. That he missed the cut last week makes no real difference given the majority of the 2020 front page had finished well off the lead in Abu Dhabi, and he will be suited by chasing the pace having come from behind to land the Scottish Open with a final-round 60 back in 2018.

Had there been three places on offer, he would've been really tempting at 7/1 but the two ahead of him are quality performers and Stone can't afford any mistakes if he's to complete a dream weekend in Dubai.

As mentioned many times here and on the @lostforepod, Robert MacIntyre gives every evidence of a future Open champion and came into this event with top-class off-the-tee stats. Seemingly unable to be kicked out of the top-20 in the tee and approach stats he sometimes struggles to tidy up his awry approaches, shown by his bogey at the fourth hole in round three, which followed a chip-in eagle just minutes before.

He wasn't the greatest at finding the short stuff soon after that, completely messing up his fifth hole to record a double, but shook it all off with an unspoilt five birdies through his final 13 holes including at the one of the hardest holes on the course, a 51-foot putt, and a chip-in at 17. A supremely confident youngster who talks the talk and walks the walk with his aggression on the course, his ability is in no doubt and he is starting to justify a long-held lofty reputation with his second win surely not far away.

There is a bit of petulance/passion there and, indeed, the Scot reminds me of a young Tyrell Hatton in demeanour, so give it a couple of years and he will be a very frequent winner. That run could start tomorrow in the final pairing, and yet to win here he has to pass a European Tour stalwart who has been there and done it and seemingly has his long-game in full working order.

Casey looked a likely candidate had he turned up at Torrey Pines this week but his decision to play in Saudi Arabia next week means he elected to come here first, a decision which looked sensible given his course record before this week, and now looks decidedly sharp.

While he hasn't played here since 2014, Casey had made all seven cuts and only once finished outside the top 20, so we knew the Emirates suited his game. After a slow start at the tricky American Express last week, he closed to eighth place to make a strong start to this Ryder Cup year, and mentioned to Tim Barter that playing 'money games' against the likes of Jon Rahm during the off-season has him better prepared earlier than usual.

Ranking very highly off-the-tee and in the top-five for tee-to-green, birdies and bogey avoidance, Saturday's bogey-free 64 was seriously impressive and he now has an ideal opportunity to underline his Ryder Cup credentials to Padraig Harrington in what, as ever, looks a competitive battle for places.

The 18-time winner looked quite brilliant in round three and his approach shot at the last, teeing up an eagle, was a thing of beauty. 'Case' is playing very close to his best, walks around with a smile on his face, gushes about his caddy and all-in-all, looks very much the one to beat. His battle with the younger MacIntyre is a tantalising prospect but his course management and experience gives him the edge.

It looks a three-man race at best but quotes of slight odds-on (one at even-money) do not flatter him and there is plenty on the exchanges to bet at odds-against, something I'm happy to take. If you're looking to keep things simple and bet in the outright market, it has to be the leader at a course whose roll-of-honour is a list of ball-strikers alongside whom his name would fit nicely.

Despite his experience, I'm not sure that playing alongside the unpredictable Adri Arnaus helped LEE WESTWOOD today and he's taken to kick on in the final round on what may prove a day for veteran experience over youth and potential.

The 41-time winner on tour relishes these courses that reward accuracy and talked about being happy with his game after a first round 69. He didn't finish close enough to the pins in round three to take advantage of solid irons and leaving a few behind in the middle of the day, he probably lost his chance of winning with a poor bogey at the easy 18th.

However, taking away last week's effort, the current Race to Dubai champion can boast a hatful of mid-60 Sundays over the last few months, has 26 appearances here that include two runner-up finishes and a host of top-10s, and appeals as a top-10 wager and a two-ball bet against mercurial Alexander Levy.

The Frenchman is finding form after a spell in the wilderness but who has only broken 70 once in five Sunday rounds here and Westwood, exuding confidence from tee-to-green and with no pressure whatsoever on his broad shoulders, should be too solid.

Laurie Canter, with the right attributes to succeed here, is doing what he does but dropped away when challenging for the lead and, after playing poorly when in front in Italy, needs to show he can get it done around and on the greens under pressure. As with Kalle Samooja, admittedly impressive in defeat in Cyprus, it will take a best-ever effort to beat those in front of them.

Likely winners have been covered but with the back-nine containing three par-fives, there is plenty of room for someone to launch themselves into the top-10 and in the past three runnings, the final front page has contained five, four and eight players respectively from outside of that position overnight. Most appealing at the prices is Golf In Dubai Championship winner ANTOINE ROZNER, still learning and improving at 27 years of age.

Another with enviable figures off-the-tee and from tee-to-green, he was superb throughout his victory at the Jumeirah golf course, bookending his event with rounds of 63 and 64, the latter a final round which was not out of the blue. The Frenchman's last six Sunday rounds have been 68 or better, including the two recent efforts in the Middle East at which he recorded his best score of the week.

Improving as he goes on his first outing here, he has spoken of his joy at being at the Paris Ryder Cup and targets a place on a future team. While he will need something miraculous to make the squad this year, he will find himself in the world's top 100 very soon and is very much on that upward trajectory pundits love to mention. He too can challenge the top 10 but it's Casey who is in command and he will be hard to beat.