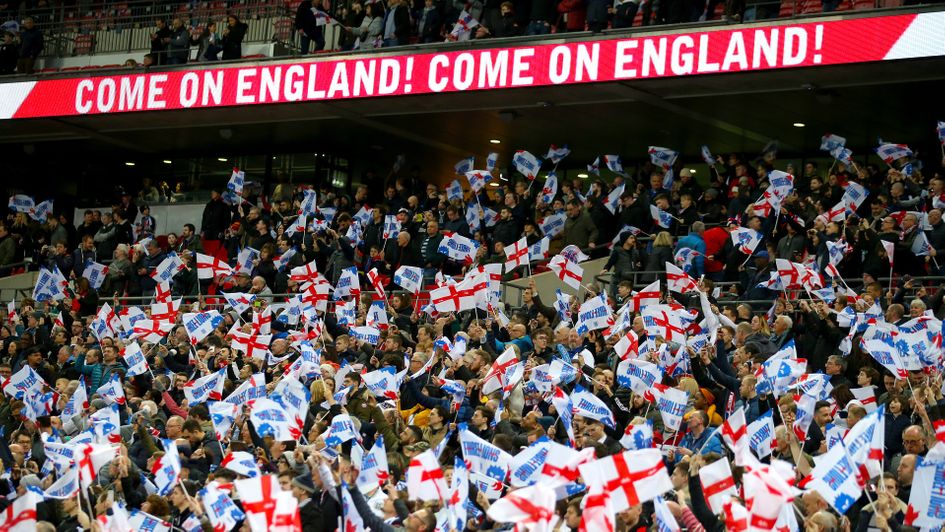 This tournament has come a long way since its inaugural 1960 edition.

France were the hosts back then, when only 17 countries entered at the qualifying stage, which consisted of a two-legged knockout format, and four teams reached the finals. Just 28 games were played from start to finish. England didn’t even bother to enter.

The contrast with the modern day could hardly be more stark.

More than 50 countries took part in Euro 2020 qualifying, with 24 teams reaching the tournament itself, which takes place across the continent from June 11 to July 11.

If formats have changed over the event’s 60-year history, one constant has been the presence of home advantage for the host nation. It’s just that this time around there happens to be 11 of them.

So, what is it actually worth?

Ubiquitous across all sports, the host tends to consistently perform to a higher level in their familiar home surroundings and in front of a largely supportive audience.

Multiple reasons are at play and have been investigated over the years. Familiarity with surroundings certainly plays a role, crowd pressure on the referee and even an instinctive response to defending your territory have been cited as reasons.

Understandably, then, the absence of crowds during the pandemic has depressed the levels of home advantage – although the effect hasn’t been universal, with some leagues within the same country showing lesser or greater changes compared to pre-Covid levels.

The Premier League has recorded slightly more away wins than home ones in the absence of fans. Home advantage has also reduced in other countries, but this complete about turn hasn’t been replicated in France, Spain, Germany and Italy.

This confirms that crowds are a likely factor, although far from the only one, and cautions against drawing definitive conclusions from a single example. 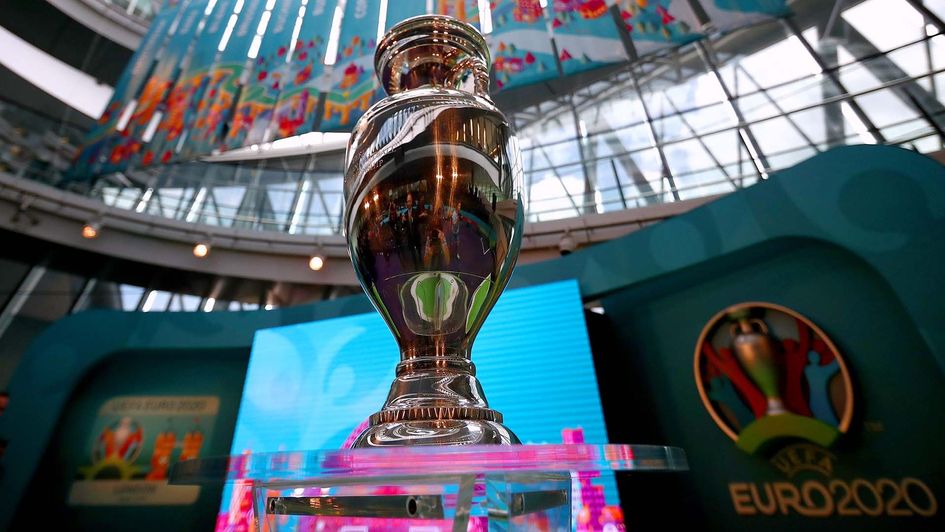 CLICK TO READ: All you need to know about Euro 2020

The most useful way to estimate home advantage is to compare the scoring and concession rates of home sides to those of the visitors.

Match results have also followed this pattern and nearly half of all Euro games have been won by the home team and only 31% have fallen to the visitors.

However, home advantage isn’t unchanging and has been in constant decline in post-war international and domestic football. Improved travel arrangements have helped drive this narrowing of the performance differential on the road compared to at home.

In the first Euro competition in 1960, 58% of home teams won their matches, scoring an average of 2.5 goals per game and conceding 1.4 in each match - a difference of 1.1 goals.

That was an enormous difference compared to the most recent past, where home advantage has trended downwards year on year, dropping below half a goal per game over the past decade.

This overall downward-trending home advantage is reflected in the average home advantage for each of the Euro competitions since 1960, which have been plotted below.

1960 is probably a sample size-driven outlier, as home advantage hasn’t stayed above one goal per game in the ensuing tournaments. But by taking the best fit trendline we can smooth out any sample size anomalies to project a likely figure for the upcoming Euro 2020 event. 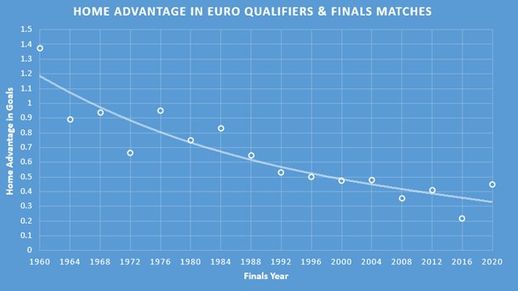 It’s likely that in 1968, two years after England lifted the World Cup, home advantage for international teams was worth around one goal per game and currently it has fallen to around three-tenths of a goal per game (0.3).

To illustrate the impact of a declining home advantage, we may consider a game between two equally talented sides, first from 1968 when home advantage was over three times its current value.

Typically, if two equal sides met at a neutral venue, each side would have around a 37% chance of winning the match in 90 minutes. If home advantage was handed to one team, their chance would rise to 60% back in 1968, but to only 41% under the current level of home advantage.

Other factors come into play when estimating match odds, such as how goal laden a game is expected to be, but home advantage remains the major contributor. 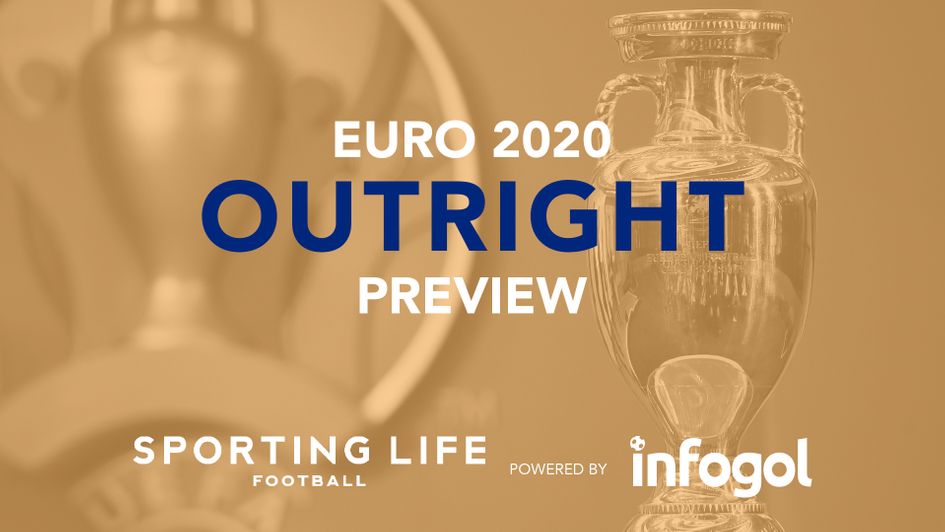 Unlike many earlier incarnations of the final stages of the Euros, where the number of home venue matches were limited to one or two designated hosts and how far they progressed in the final stages, Euro 2020 will have a minimum of 24 games where a side plays in their home country.

So, an appreciation of the importance of the venue a game is played at will be essential.

England have most to gain from the 2020 format

England potentially have most to gain, with three home group matches ensured, a last 16 game as a possibility and the semi-final and final earmarked for Wembley Stadium. If you take away their home advantage in the group stage, England’s likelihood of topping Group D falls from around 70% to 60%. 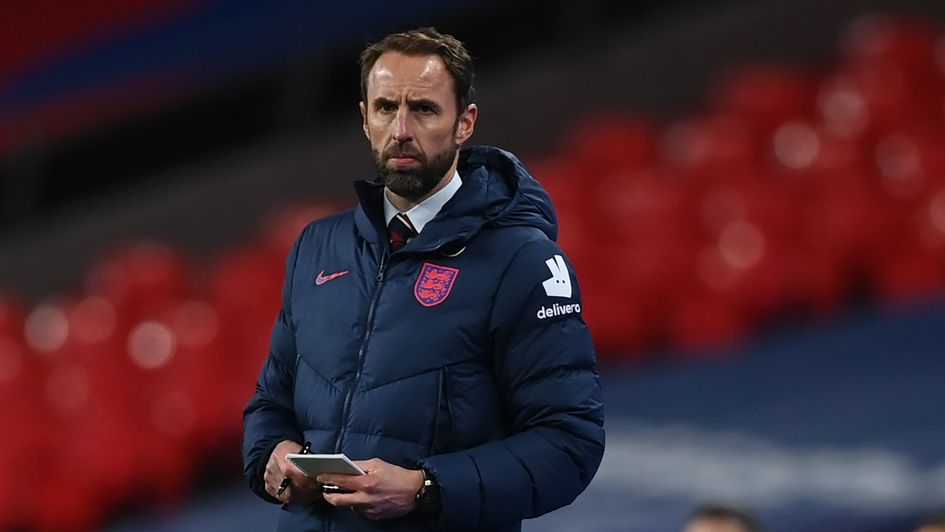 CLICK TO READ: What formation should England play at Euro 2020?

England need to progress accordingly to attain the maximum home advantage, a route that would undoubtedly boost the chances of a long-awaited tournament win.

Football is merely visiting home at the moment. However, the visit alone makes it more likely that it stays.