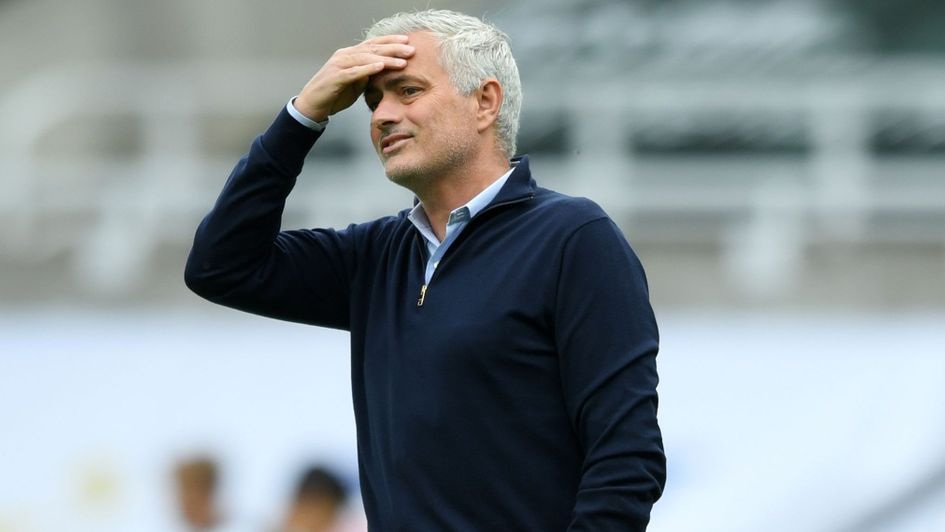 Has Jose Mourinho run out of ideas again?

Jose Mourinho: Why it is unraveling at Tottenham for the 'Special One'

This was published before Tottenham's defeat at West Ham on February 21.

After winning the Champions League with Porto in 2004, Jose Mourinho’s meteoric rise from interpreter to world class manager was complete.

Having answered the call to turn Chelsea into a modern-day powerhouse, backed by Roman Abramovich's millions, he could hardly have arrived on British shores in a more explosive fashion; his opening press conference at Stamford Bridge remains iconic.

However, that fresh-faced, innovative coach, a man bursting with enough confidence and charisma to christen himself the 'Special One' is long gone.

Whether nostalgia-induced optimism, Mourinho's ability to be reinvigorated by a new job, or something entirely different, the arrival of the Portuguese manager at a new club always seems to elicit an initial uptick in results, before things slowly, then rapidly, unravel.

This is no new observation; it's fair to say his last few years in management have been anything but 'special'.

But why does it keep happening? And more to the point, after Chelsea (twice), Real Madrid and Manchester United all experienced the negative aspect of 'The Mourinho effect', are Tottenham about to become the latest casualty?

Can Tottenham make the top four?

When faced with an in-form Manchester City last weekend, Tottenham were outclassed.

They looked inferior across all areas of the pitch at the Etihad - expected goals (xG): MCI 2.46 – 0.43 TOT - and mustered just 36% possession. Their best chance of the game was given an xG value of just 0.12, highlighting just how toothless Spurs really were.

Unfortunately, lacklustre and pedestrian performances in games of such magnitude have defined Jose Mourinho’s career in recent years. 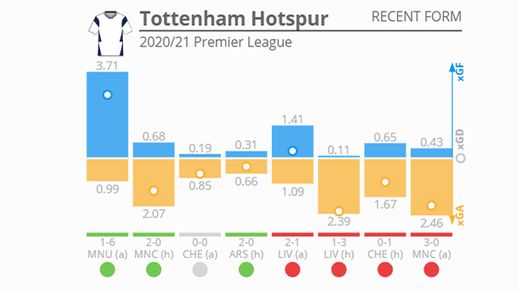 They average 0.93 expected goals for (xGF) and 1.52 expected goals against (xGA) in those contests, having fashioned just four non-penalty big chances (>35%) across eight such fixtures.

It is also worth pointing out that their expected goals process in attack has been hugely boosted by one performance at Old Trafford.

Spurs play deep, setting up to absorb waves of opposition pressure before aiming to counter-attack. Instead, they're often ruthlessly dominated, relying on a moment of individual attacking inspiration to claw them out.

This approach is hardly conducive to consistently winning games, and as long as Mourinho continues to view possession as an unnecessary risk, their underlying numbers, and as a consequence long-term results, won't improve. 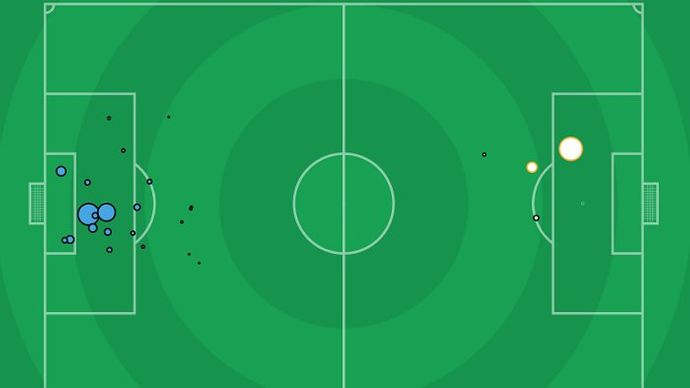 Although their woeful numbers are a damning indictment of Mourinho’s tactical inadequacies in big fixtures, the ‘beautiful game’ can obviously produce almost incomprehensible results.

Before Saturday, Tottenham had won both of their matches against Manchester City under Mourinho 2-0 despite heavily losing the xG battle in both.

Emerging with the three points in this manner occasionally is part of football, but producing such abysmal attacking displays consistently is unsustainable.

Infogol's expected league table actually has Tottenham in 10th this season, a place below their actual position.

That might not sound particularly insightful, but we had them nowhere near the top when Mourinho's men were being lavished with praise as early-season pacesetters.

While a glance at the table, with Spurs in ninth, may lead to the quick conclusion that a club of their size is underperforming, from a performance-to-points perspective, it's actually the opposite.

That 'electric' start to the campaign where they were scabbing wins is finally catching up to them.

They are set for where they deserve to be.

To add to the concern, Tottenham have made no semblance of improvement under Mourinho since his appointment.

They averaged 1.41 xGF per game under his tutelage last season, and their attacking process is identical this time around.

The Portuguese has stuck to his philosophy throughout his career, but it's now undeniably outdated, with Mourinho's most recent piece of silverware won with Manchester United way back in 2017 when they lifted the Europa League trophy.

For a man branded as a serial winner, to go four years without doing so is quite the stretch of time - for accuracy, he was out of work for 12 months, but still...

Ironically, the following season the Red Devils would finish second in the Premier League and Mourinho claimed, despite his incredible managerial success, that it was the best achievement of his career.

Once again, xG suggested that was fortunate, though. United ranked sixth in Infogol's league table based on xP.

Their glaring overperformance in defence, conceding just 28 goals from chances equating to 47.6 xG, was mostly explained by David de Gea's heroics, arguably the best keeper on the planet at that time. 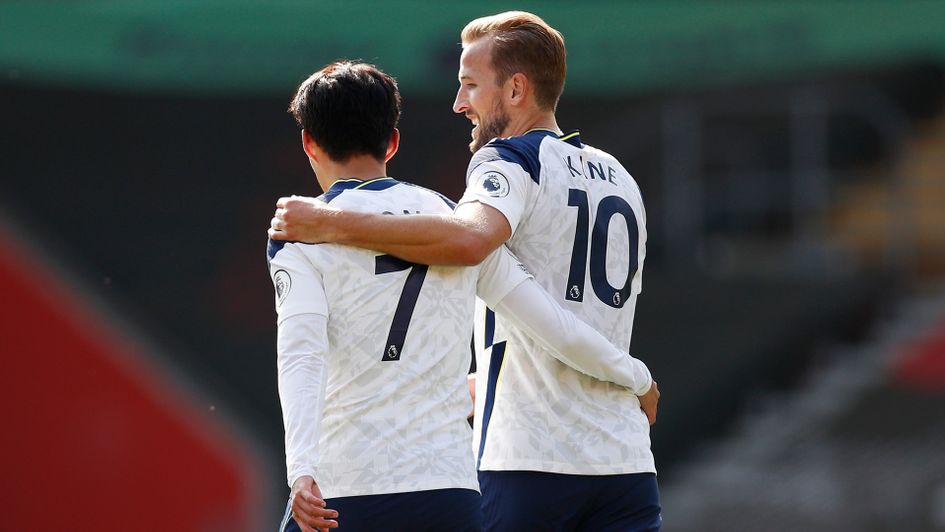 Harry Kane and Son Heung-min have formed a prolific partnership, but at what cost?

Tottenham's talismanic forward has scored 13 goals (10.76 xG) and made 11 assists (5.28 xA) this term, but is increasingly dropping deep to receive the ball.

This has led to Kane recording 0.27 xA per game, playing mesmerising long searching balls and, while this has unsurprisingly drawn plaudits as some kind of managerial masterstroke, it's actually a symptom of Mourinho failing to orchestrate an efficient attack.

At Manchester United, Romelu Lukaku had to drop deep to get involved in games because of United’s creative shortcomings, and Kane is similarly being drawn away from prominent positions just to receive the ball.

The England captain has recorded 0.55 expected goals per 95 minutes (xG/95) this season, ranking highest on this metric at Tottenham, but will Kane reach 30 goals under Mourinho, like he did under Mauricio Pochettino? I have my doubts.

And remember, for all the plaudits, Tottenham are ninth in the Premier League table. 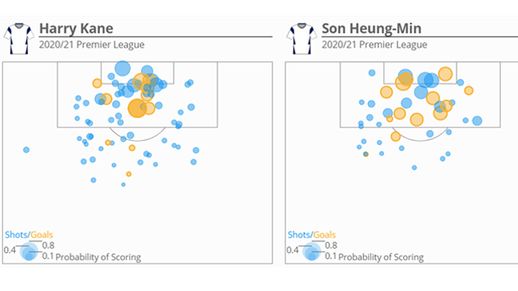 Spurs look even more rudderless without the influence of Kane, recently suffering underwhelming defeats to Brighton and Chelsea while he was sidelined through injury.

No team can anticipate having a player of Harry Kane's calibre sidelined without any detrimental effects, but it’s ultimately the manager’s responsibility to overcome this problem, within reason.

Mourinho’s adversary, Pep Guardiola, has excelled in this area, tinkering with his tactics and personnel without the near-permanent absence of Sergio Aguero - who recorded 0.95 xG/95 last term - to win 17 straight matches in all competitions.

Guardiola has a better squad, but it’s difficult to sympathise with Mourinho given his management of Dele Alli.

After Alli’s emergence at Spurs, it wouldn’t have been a ludicrous statement to suggest the 24-year-old would eventually be providing contribution similar to that of Ilkay Gundogan (0.47 xG/95) this season.

In fact, the England international did exactly that only a few seasons ago, with an outstanding 2016/17. 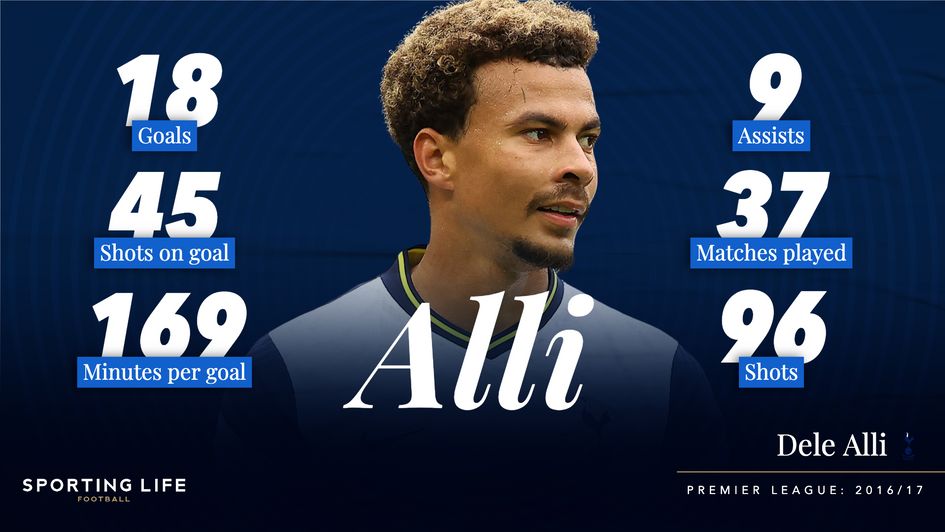 Having initially prompted a lift in Dele's performances when he first arrived, Mourinho has sidelined him.

What is hard to know is whether he is needlessly falling out with yet another player, or simply failing to utilise Alli in an appropriate system. The truth lies somewhere in between.

Without doubt, this is a player that should be featuring for a team that is ninth in the Premier League table, especially when their best player and leading striker is out injured.

How good is Heung-min Son?

Heung-min Son's elite finishing ability has papered over the cracks at Spurs since Jose Mourinho's arrival in November 2019 - especially this term.

The South-Korean has established himself as one of the league’s most clinical forwards over the past six years, impressively outperforming his xG for the last five seasons.

This campaign has been no different, with Son scoring 13 goals from chances equating to 7.6 xG – an overperformance of 71%.

While usually this differential would regress to the mean over time, Son has consistently demonstrated his ability to overperform.

Tottenham relying on Son is reminiscent of Manchester United relying on De Gea in 2017/18.

Mourinho's tactical failures can be hidden by exceptional talents. But only for so long.

Could history be repeating itself with Mourinho?

Yes he starts well - much of which must be down to shock and awe - but ultimately results decline. 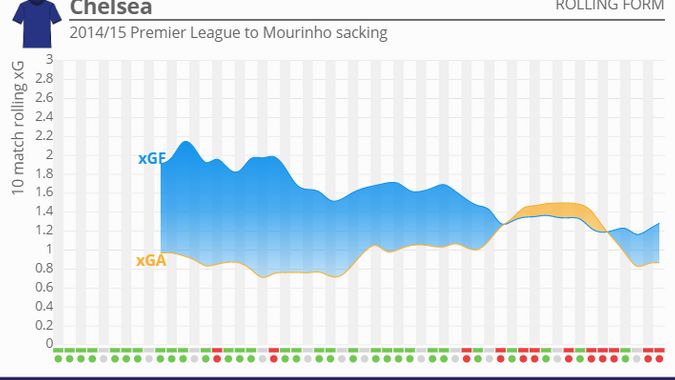 The narrowing of the xG trend-lines during Mourinho’s second spell in charge of Chelsea, when he was ultimately sacked with the team in lower midtable, is a perfect illustration of this.

This also happened at Manchester United and worryingly for Spurs fans, it is now happening at Tottenham, too.

Spurs having created an average of 1.18 xGF per game across their last 10 Premier League matches,.

To make matters worse, their defensive process is also poor (1.54 xGA per game). 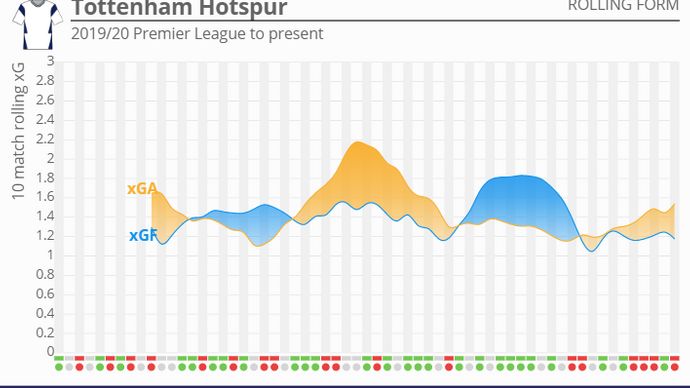 Although not ideal, woeful attacking output can often be compensated for by an outstanding defensive process. Tottenham do not have that.

There’s no denying Mourinho’s style of play was brilliantly effective 15 years ago but, crucially, refusing to adapt has hindered one of the world’s greatest ever managers.

Simply creating a siege mentality at clubs no longer works. The game has tactically evolved, leaving the Spurs boss behind.

The Portuguese’s achievements in football have been nothing short of monumental, and if we let him count the Community Shield and domestic Super Cups (he'll claim them) he has won 27 major honours as a manager.

But with the last coming in 2017, and the clear evidence of the data, Mourinho is no longer the 'Special One'.