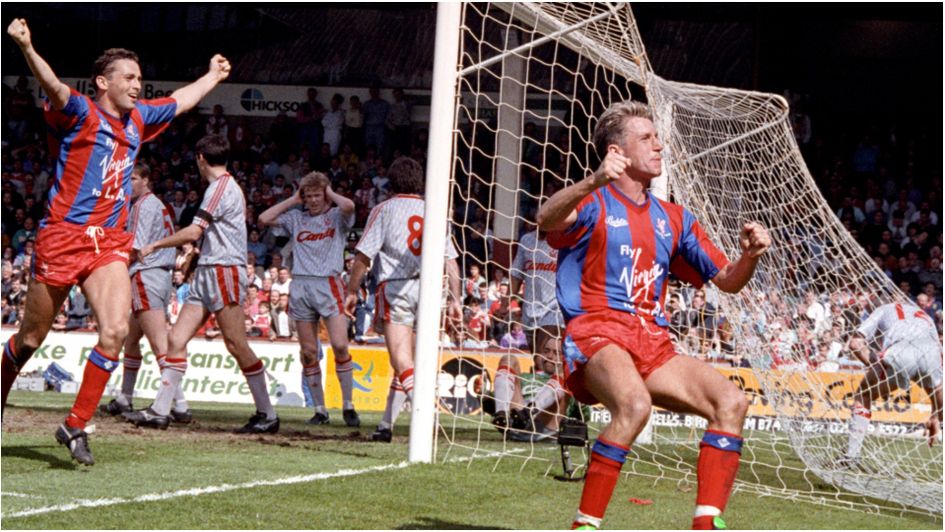 This time of year is usually FA Cup semi-final time, so Paul Higham and Joe Townsend have delved into the archives to pick out the best of the bunch.

It seems looking back at football days gone by is a handy way for people to raise their spirits and pass the time in these days of uncertainty, so here at Sporting Life we'll do our best to entertain and engage with a look at the best football has had to offer of the years.

This time it's FA Cup semi-finals. Plenty of these have been given re-run airtime on TV so that got us thinking about the best games from down the years of this famous old competition.

Take look at our best below, and let us know your favourite by getting in touch @SportingLifeFC or Email us here with your thoughts and selections...

It’s not quite Wimbledon beating Liverpool in the FA Cup final of a couple of years earlier, but this really was a turn up for the books given the obvious gap in class between the teams – and just the pure thrill of the game itself makes it worthy of top spot.

The Reds had, after all, smashed the Eagles 9-0 at Anfield earlier in the season and strolled into a 14th minute lead at Villa Park – back in the good old days when semi-finals were played on truly neutral venues around the country.

Ian Rush opened up the scoring and with Steve Coppell’s side missing Ian Wright they were right up against it, but a combination of staunch defending on their part, quality set pieces and some shambolic defending by the Liverpool rearguard they got right back in it.

Mark Bright levelled before Gary O’Reilly put them ahead with just 20 minutes left, was the shock on the cards? No seemed to be the resounding answer as Steve McMahon (81) and a John Barnes penalty two minutes later completed a classic Liverpool comeback.

Class eventually told and the plucky Eagles would be denied in heart-breaking fashion – or so we thought! Andy Gray (no not Richard Keys’ side-kick) popped up to pray on more muddling Liverpool defending just two minutes before the end to force extra time.

The Reds were rattled, every throw-in, free-kick or corner gave the great Alan Hansen and company palpitations, and Palace were the ones to grab the winner as Alan Pardew no less popped up to send them to Wembley after an astonishing end to an absolute classic – an FA Cup semi-final still to be beaten for drama.

April 8 1990 was one hell of a day for FA Cup football, with this belter taking place just after Liverpool’s exit and also producing a thriller up at Maine Road.

Joe Royle’s Latcis were in the second division but had already made the Littlewoods Cup (as it was then) final after thrashing West Ham with the help of their plastic pitch at Boundary Park, but they showed they could play on grass too in this one.

Brian Robson and Neil Webb cancelled out Earl Barrett’s opener but Ian Marshall struck 15 minutes from the end to also send this game into extra time – where Danny Wallace caught Oldham cold just two minutes into the extra time to put United ahead once more.

Latics veteran Roger Palmer stepped up with the equaliser seven minutes from the end though to end a breathless game all square. Mark Robins would end up winning the replay for United and possibly saving Sir Alex Fergusons’ job again.

So much is this match remembered for Ryan Giggs’ incredible winning goal and shirt-off, chest-hair exposing celebration, an image indelibly etched on the psyche of any 1990s football fan, that the rest of the match is often forgotten.

Having played out a goalless draw in the first meeting, the teams met again at Villa Park and the drama that ensued was in stark comparison to the drab 0-0 of three days prior.

United’s opening goal was a thing of beauty. Started by a trademark throw out from Peter Schmeichel, brilliant link-up play between David Beckham, Ole Gunnar Solskjaer and Teddy Sheringham ended with Beckham curling a beautiful shot in from just outside the box. 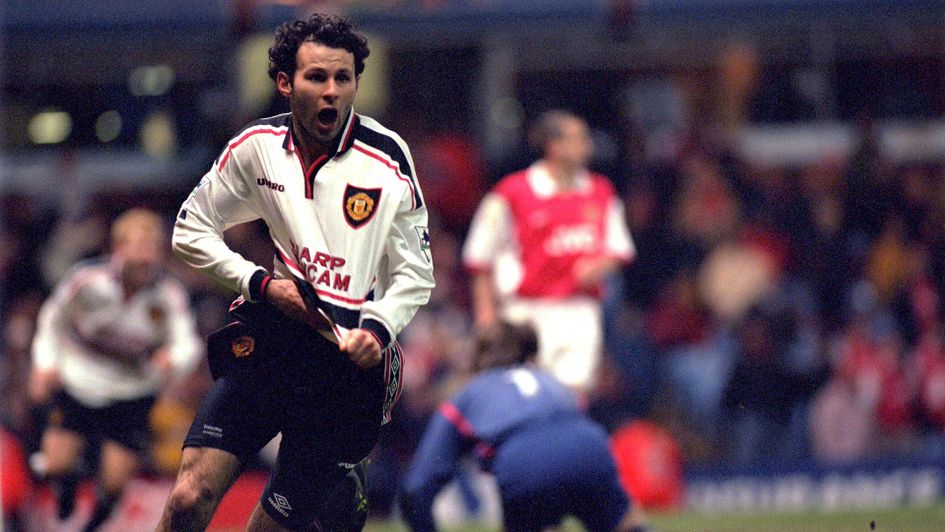 Rarely a player to be upstaged, Dennis Bergkamp pulled Arsenal level after half-time by turning and firing in a 35-yard equaliser.

The Dutchman then thought he’d put helped put the Gunners ahead when his perfectly timed through-ball was slotted home by Nicolas Anelka, only for it to be ruled out for offside.

But that wasn’t enough for Manchester United’s captain Roy Keane – he was furious the decision had taken so long. His complaints yielded a second yellow card and down the tunnel he went.

With the 90 minutes up, Phil Neville scythed Ray Parlour down in the box to give Bergkamp the chance to win it. But Schmeichel guessed left and pushed away his attempt.

Extra-time then offered little to excite either set of supporters until the 109th minute, when Giggs scored a goal for the ages. Collecting a stray pass from within his own half on the left wing he dribbled his way past four Arsenal defenders, who probably thought they’d done enough by forcing him to the angle of the six-yard box.

But he rifled into the roof of the net beyond a helpless David Seaman.

And, of course, took off his shirt and swung it around his head to expose a truly astonishing amount of chest hair.

When third-tier Chesterfield reached the semi-finals of the FA Cup they were as big an underdog as there’s ever likely to be, and they were robbed of a place at Wembley.

When Premier League big spenders Middlesbrough had Vladimir Kinder sent off shortly before half-time the Spireites took full advantage to race 2-0 ahead at Old Trafford.

Boro pulled a goal back through Fabrizio Ravanelli, he of shirt over the face celebration fame, but in the 69th minute the minnows thought they were almost there.

Jonathan Howard’s shot hit the underside of the bar before bouncing over the line – but no goal was signalled by referee David Elleray.

Just 90 seconds later it was level after a foul by Sean Dyche, scorer of Chesterfield’s second goal, on Juninho was wrongly adjudged to have been committed just inside the penalty area, which allowed Craig Hignett to score from 12 yards.

The huge pre-match favourites appeared to have completed the turnaround in extra time when Gianluca Festa scored but there was time for one final twist, as Chesterfield-born Jamie Hewitt fired home a 119th minute equaliser.

An iconic goal in an iconic game from an English football icon – sometimes things just fall so sweetly into place to carve out a rare piece of footballing perfection. This day in 1991 was all about Paul Gascoigne.

The scorching 30-yard free kick that flew beyond David Seaman was only beaten by Gazza’s brief but legendary post-match interview in the Wembley tunnel – they don’t make players like him anymore.

Gary Lineker was there to finish off two goals for Spurs after Gascoigne weaved his magic on George Graham’s side, who pulled a goal back through Alan Smith for 2-1 but just couldn’t live with the Geordie genius in this form.

It remains the last time Spurs made the FA Cup final and a bitter-sweet moment for Gascoigne, who would be carted off the Wembley pitch in the final with a serious knee injury.

The Steel City was deserted on April day in 1993 as over 75,000 of the city’s football fans travelled down the M1 to Wembley to see their sides clash for a place in the FA Cup final.

As with the north London derby at the same venue two years previous, this semi-final saw a wonderful free kick from one of England’s most talented stars – as Chris Waddle rifled in a magnificent free kick from almost the identical spot to Gazza’s against Arsenal.

Bearded veteran striker Alan Cork levelled for the Blades but their hearts were to be broken in extra time as Mark Bright sent the Owls back to Wembley for a third time in a eventful but ultimately fruitless season.

Wednesday faced Arsenal in the final, who had already beaten them in the League Cup final that year. They’d do so again but only after extra time of a replay when Andy Linighan’s goal gave the Gunners a cup double and the Owles a double dose of cup heartbreak.

Why is this one in here? Well, a 1-0 win to the Arsenal is hardly headline-worthy news, but just for the fact that this was the FOURTH time the game was played makes it special enough to get into our rundown.

Football didn’t like penalty shootouts, they’re unfair, any team can win them. No, in 1980 you had to earn your way into the FA Cup final, grind down your opposition and play game after game after game.

The second replay, or third game, was probably the best as it had the most goals (just two though!) and about as far apart as you could imagine with Alan Sunderland scoring in the first minute and Kenny Dalglish almost in the last.

So this war of attrition went to a fourth game, or a third replay (confusing isn’t it?) and this time Brian Talbot settled it for the Gunners, who after all that went on to lose the FA Cup final to West Ham.. 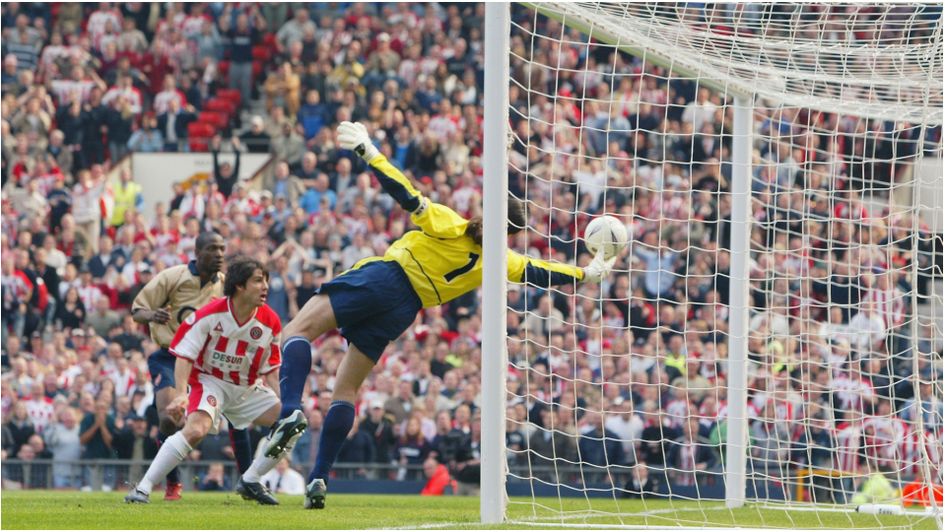 A much better ‘1-0 to the arsenal’ memory is this one, and this makes the line-up more for a goal not scored than one hitting the back of the net, with David ‘safe hands’ Seaman pulling off maybe the save of all saves in the competition.

Neil Warnock’s Blades matched their illustrious rivals blow-for-blow, and were massively unlucky to go behind when referee Graham Poll got involved in Freddie Ljungberg’s goal.

David Seaman's incredible FA Cup save | From The Archive

Veteran keeper Seaman, who was making his 1000th appearance showed agility most 39-year-olds can only dream about as he produced elasticity of the highest order to deny United an equaliser.

Substitute Paul Peschisolido looked for all money to have scored before a big Yorkshire paw clawed the ball off the line – maybe goal-line technology would’ve proved it had gone over, but without the luxury the Gunners made their way into the final.

A ding-dong affair, as games between these two often are, but as in 2012 when Chelsea battered their rivals, it was the Blues who again got through in a much more even contest.

Willian fired in a great free kick and scored from the penalty sport either side of a Harry Kane header to see Chelsea go in front twice, but Dele Alli’s leveller came as Spurs got well on top and the tie looked to be swinging in their favour.

However, Eden Hazard was sat on the bench for Chelsea and he came on to inevitably change the game in their favour as he lashed in a shot through Hugo Lloris with 15 minutes left to put the Blues in front for a third time.

This time there was no way back for Spurs as Nemanja Matic fired in a wonderful fourth to seal Chelsea’s place in the final.

You would’ve got huge odds on a Stoke v Bolton affair getting in the list, but then again you’d also have been given huge odds on this being a goal fest as well.

A goal fest it was though, and at the time the five goals Stoke scored were the most by a team in a post-war FA Cup semi-final and also the biggest margin of victory – not bad for the much-maligned Tony Pulis side.

Surprisingly, given their long history, it was the first time Stoke had made the FA Cup final – doing so thanks to a Jon Walter brace in the second half following first half strikes from Matthew Etherington, Robert Huth and Kenwyne Jones.

They’d lose out in the final though to Manchester City.