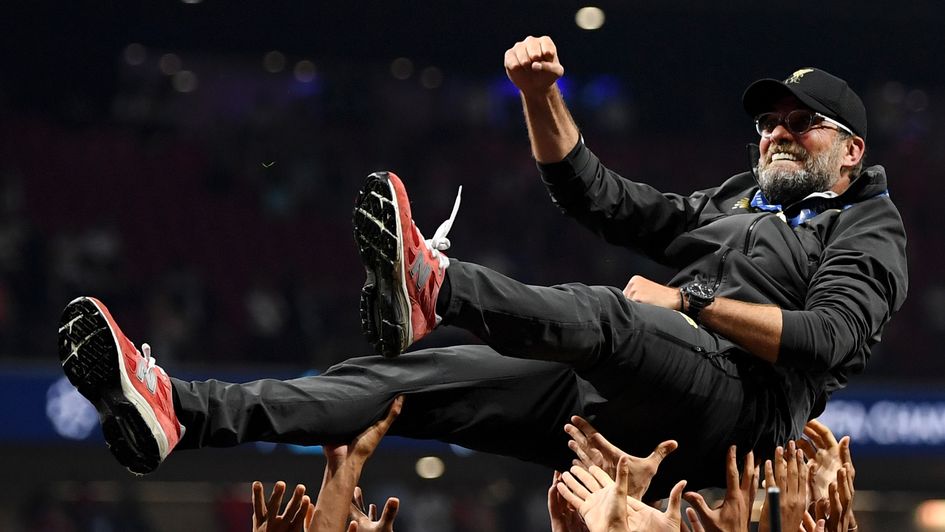 Jurgen Klopp celebrates after guiding Liverpool to the Champions League

Liverpool are champions of Europe once again after beating Tottenham in the Champions League final. Check out all the reaction here.

Mohamed Salah's penalty, awarded after only 22 seconds, and a late Divock Origi strike settled a game that failed to live up to the billing.

Here we have reaction from both managers as well as players and pundits.

Check out some of the reaction from Madrid, below...

Liverpool's Champions League triumph left Jurgen Klopp ecstatic, emotional and hungry for more after finally getting his hands on silverware and then receiving a call from Premier League adversary Pep Guardiola.

"A second ago I had Pep Guardiola on the phone. Our head physio (Lee Nobes) worked for Man City at the beginning of the season, but he wanted to win the Champions... no, it's a joke.

"And we promised each other already that we will kick (each other's) butts next year again.

"We will go for everything and let's see if we get something."

On Liverpool's season and the Champions League win: "I only want to enjoy that we won it All the rest is not important.

"It's for all the people around the world, in the stadium. They are with us and they are now celebrating like crazy and we will have this tomorrow in Liverpool and we will celebrate together (at the parade).

"We will have a sensational night. I feel mostly relieved, to be honest. Relieved for my family because they are pretty close to me, as you can imagine.

"Six times we always flew on holiday with a silver medal. That doesn't feel too cool. And this is completely different, so this is for them as well.

"It's for our supporters, of course, but also our owners as well because they never put real pressure on us.

"They appreciate the development; they see the steps we make. It's for them as well. It's great.

"For the players, we were all pretty much crying on the pitch because it was so emotional, it was so big.

"It meant so much to us but I should have probably said, first of all, I know how Tottenham feels better than anybody else in the world.

"They played a sensational season as well and they would have deserved it as well.

"But tonight we scored goals in the right moment, but I told Poch directly after the game that he should be really proud of what they did this year as well."

🙌 Could any team love their manager more than this?! #LFC pic.twitter.com/pObLqGcAAP

"Did you ever see a team like this? Fighting with absolutely no fuel in the tank any more.

"We have a goalkeeper that makes difficult things look easy, very nice thank you very much. This is unbelievable, what a night, the night will be much better now.

"It's really the best night of my life professional-wise. It took a while obviously.

"We tried a lot of times but it's important of course that we develop and improve. It's always like this but we are doing good steps. This little mark helps a lot, so now we can carry on."

"I think the run that we've had, we beat everyone in our path.

"We've done something special again tonight and obviously the early goal and the late goal has finished them off and we've probably been dominated through the main part of the game but we've shown what we can do anyway.

"I think when we look back on tonight we're not going to think it was a sluggish game, we're going to think we've just won the European Cup and we've done it for all these fans."

On joining the ranks of Liverpool heroes who have lifted the trophy, the 20-year-old said: "It's hard to think of myself as a legend. For me I'm just a normal lad from Liverpool whose dream has just come true."

"Like I've said before, without the manager this isn't possible.

"What he's done since he's come to this football club is unbelievable, not only the players that he's brought in to make the squad stronger, the players that were already here he's made better.

"He's created a special dressing room, so all the praise and everything goes to the manager."

"Without the manager, this is impossible."

"This is what you do it for, the best moment of my life."

On lifting the trophy, Henderson added: "I'm so proud to be part of this football club. I've been here a long time now, but to captain it is even more special for me.

"It means everything to me football. Since I was a kid I've just tried to give my best every time I've played football and help my team no matter what.

"There has been tough times and it has been difficult throughout my career but I've kept going, just like this team has kept going, and you have moments like this.

"This is the best moment of my life - apart from my children. This is what I've dreamed of since I was a kid. 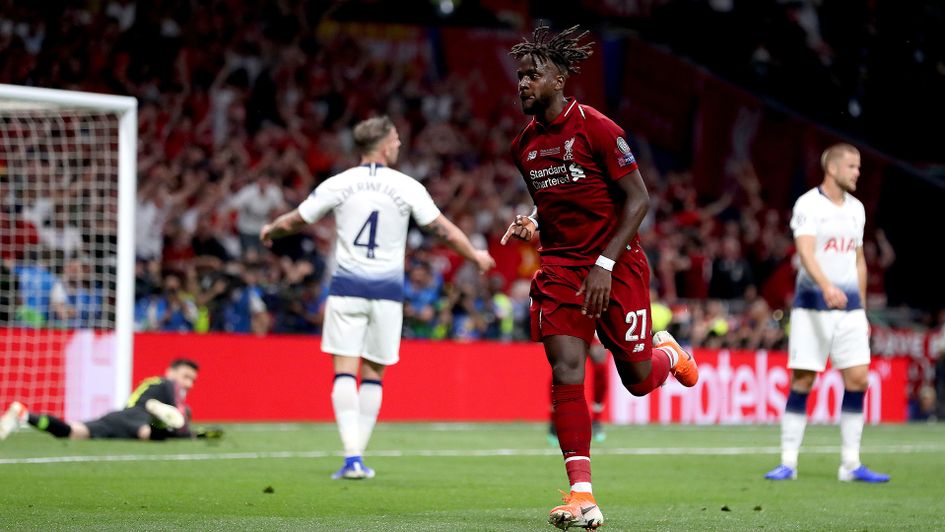 "It's first about the team. I'm happy that I could play my part, but every single player fought hard today so it's just special.

"You can see the fans, it's a special day for Liverpool."

Jürgen Klopp searches out Divock Origi after the game to give him a bear hug.

He knows how big that goal was.

Origi is the hero again! pic.twitter.com/F2sxf7bcNo

On his post-match celebratory drink...

😂 Right now James Milner will be downing an "exotic" lime and lemonade as Liverpool's celebrations continue long into the night!#LFC #UCLfinal pic.twitter.com/WnkrkH6wi2

The man-of-the-match believes this could be the start of more trophies for Liverpool. "I think we should be hungry anyway. But this season with Liverpool ended today, we got the Champions League.

"It's something that we definitely wanted but I think in July when we start again everyone starts at zero.

"Everyone is working towards their goals and obviously we want to challenge for every trophy if possible. We have the squad for it.

"Hopefully we can challenge Man City again next season for the title because I don't think they will go anywhere, but we will go nowhere either.

"To be two years in a row in the Champions League final is something we hope to be every year, but we know how difficult it is to reach it.

"But we are all ambitious. We all want to have these nights a couple of times a year.

"So, let's just go for it, work hard, stay humble. That's the only way forward."

The Tottenham boss gave no clues about his future: "It's too early to talk a lot now, so early. We need to assimilate that defeat.

"For sure we are going to have time to talk in the future. The future can be tomorrow, after tomorrow. It is not a moment to talk too much. You can interpret things in different ways.

"In five years at Tottenham, the project was so clear, our ambition was amazing, and the commitment from the players was amazing - the club played their first Champions League final.

"Now is the time to stay calm, change the mood, for sure we are going to have time to talk."

On the decision to play Harry Kane: "The problem is you create a history or a drama but it's not about playing with Harry Kane or Lucas Moura. That is the thing that was important or not important.

"It's a decision and, of course, for me, Harry Kane after one month and a half finished the game fresh.

"He didn't score like other players. It's not a point to talk too much. My decision, I promise, was about analytics and thinking with all the information. I don't regret my decision."

The former Manchester United boss, working for BeIN Sports, said: "I think the three midfield Liverpool players, if we are going to see the wave of their positioning, they played on a straight line in front of a back four.

"You don’t remember Henderson, Wijnaldum, Fabinho, Milner being close to the three attacking players, to have one arrive in the box, nothing. They stayed in a block of seven, they were very pragmatic, very solid defensively.

“I think also that if this match is not the Champions League final, if it is a Premier League match, or the final of the League Cup, we would all say the game was not good.

“Because it is a Champions league final, it has this emotional side of it, but I think the quality of the game was not good, and Tottenham have to be frustrated, because they lost and they feel that they are better than this. These big moments are when you have to be at your best level.”

Former Liverpool player and Sky Sports News pundit Dominic Matteo says: "It wasn’t the best of performances, but that doesn’t matter. They worked hard, but it was those fine details which Tottenham didn’t quite have.

"They got goals at crucial points, early as well which helped. I think this is the start of more trophies for Liverpool going forward – it’s a massive moment for the club, and it’s deserved.

"He’s put the foundations into Liverpool, Jurgen Klopp, there’s been an improvement every season and I’m so happy for him and the club."

🎶🔴 Liverpool players, staff and fans join together in a spine-tingling rendition of You'll Never Walk Alone.

Congratulations to @LFC and all the fans. Welcome to the club Jürgen. #UCLfinal #Liverpool #YNWA #Sixtimes

Congrats, @LFC. Really happy for everyone at the club and fans. You deserved this.

YOU’LL NEVER WALK ALONE‼️‼️‼️‼️ #WEARELIVERPOOL❤️ CONGRATULATIONS MEN AND ANYONE THAT HAS ANY AFFILIATION WITH THE CLUB!! @LFC 🏆

Congratulations to @LFC
Champions of Europe yet again and thoroughly deserved!!
So much to look forward to in the next few seasons!
Allez, allez, allez..... 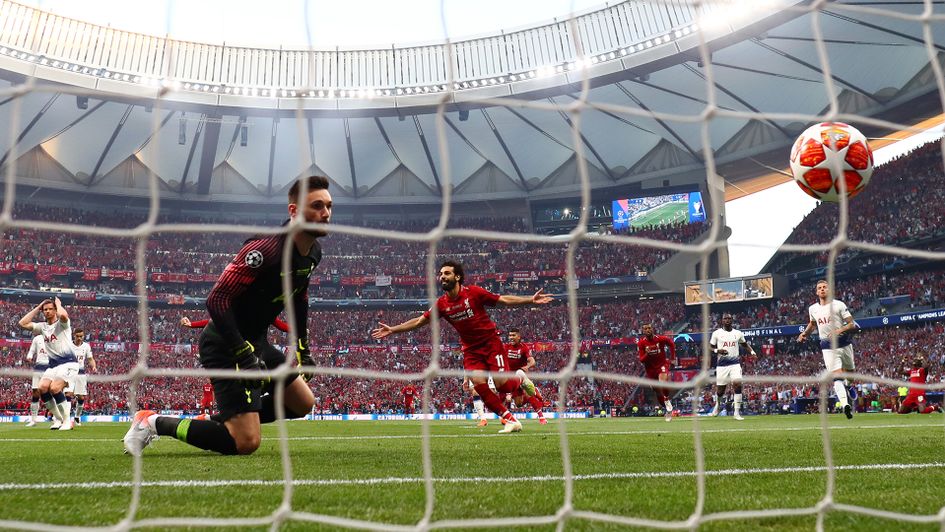 Mo Salah scores an early goal from the penalty spot