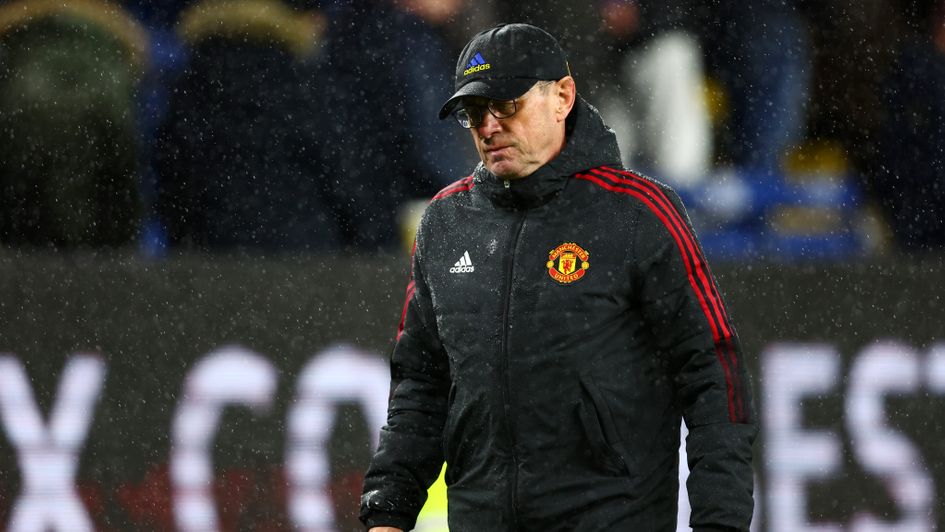 Ralf Rangnick, Man Utd and gegenpressing: What is it and why can't they do it?

When Ralf Rangnick was appointed Manchester United manager at the beginning of December it was widely assumed his first task would be to implement the gegenpressing philosophy that he helped create in Germany.

But two months on, while United are gradually improving they seem miles off becoming the hard-pressing, sharp-attacking side we saw develop under Rangnick elsewhere in his career.

Instead, what we are seeing is arguably closer to the style of pressing Ralph Hasenhuttl has used since becoming Southampton manager in 2018, which is curious considering Rangnick and Hasenhuttl – who face each other on Saturday – both managed RB Leipzig and were both compared to Jugen Klopp in terms of gegenpressing prior to their arrival in England.

Hasenhuttl’s style of pressing is undoubtedly a choice, whereas at this stage it is not clear whether Rangnick has taken a conscious decision to ease off, or if his United players are simply unwilling to follow such demanding instructions.

But before we delve into the issues at United, and wonder what they can learn from Southampton, it is worth investigating exactly what is meant by pressing and how this can manifest in different ways.

Klopp first popularised gegenpressing in England with his furiously chaotic Liverpool side who, before calming down and moving away from the all-action philosophy prior to their first Premier League title, took part in wild end-to-end games thanks to the manager’s desire to constantly press the opposition.

The idea is to deploy a very aggressive defensive line and apply pressure both to the ball and to opposition players close to it, hunting down possession in an onrush of bodies that forces the other team into a hasty clearance or a mistake; either they remain camped in their own half as they concede possession, or they are tackled in a dangerous area.

Klopp famously believes the gegenpress is more effective than the best number ten – hence why he hasn’t traditionally used one, instead packing his 4-3-3 with hard-working central midfielders capable of quickly feeding the front three once the ball is won.

A central tenet of the gegenpress is that winning the ball high means plenty of space to burst into; quick vertical attacks are necessary to take advantage before the tackled team can get back into their usual defensive shape.

In other words, the gegenpress as a defensive concept only works if it is matched with a single-minded desire to play in vertical lines. There is no time for sideways possession.

Southampton certainly follow the on-the-ball part of the philosophy, but they are by no means gegenpressers.

Instead, Hasenhuttl has deployed a more conservative version that relies on targeted presses – setting traps – in key areas of the pitch, using his 4-2-2-2 formation to get the advantages of the Germanic model without needing to take the risk of a permanent high line or an aggressive and risky shape.

Southampton average 46.3% possession, putting them 11th in the Premier League, and yet they are fourth for pressures in the attacking third (835), behind only Brighton, Chelsea, and Liverpool.

They also have the fifth lowest PPDA (10.02), a measure of opposition passes per defensive action made; the lower the score, the more defensive actions made and therefore the less time the opponent is given in possession.

They are able to achieve these figures despite regularly sitting behind the ball in a midblock, an unusual situation but one that reflects the growing tactical maturity of the division as managers mix and match the best aspects from various philosophies.

Like Chelsea under Thomas Tuchel, Southampton do not exhaust themselves by tearing around the pitch at all times, but they will push very high from opposition set-pieces (including goal kicks), and will set pressing traps; the entire team will suddenly rush into unified action once the ball is with a weaker player or in a weaker area (e.g. on the touchline, where passing options are limited).

After a promising start, followed by a regression back to the listless football of the Ole Gunnar Solskjaer era, it is possible Rangnick is starting to follow the Hasenhuttl method.

Rangnick’s predecessor reportedly didn’t coach pressing at all, but rather felt his players should automatically close down the player nearest to them – a concept about 20 years out of date.

There is a big difference between closing down (or a ‘pressure’, as it is recorded in the stats) and pressing, a team system, and pressing certainly is not the random configuration we saw under the Norwegian, who left huge gaps when any vague attempts at a gegenpress were enacted (such as in the 5-0 defeat to Liverpool).

What is striking about United’s ten league games under Rangnick is that their pressure stats are actually down slightly from the other 13 matches of this season.

Solskjaer’s team attempted more pressures in the final third (27.2 per game) than Rangnick’s (26.9 per game), as well as more in the middle and defensive thirds.

There is a negligible difference between Rangnick and Solskjaer in terms of the average number of pressures per team press, the number of players involved in the press, and the average duration of the press.

Have United improved under Rangnick?

However, United’s PPDA is down significantly, from 14.3 to 10.9 (for comparison, Liverpool have the league’s lowest average PPDA this season with 8.4, while a 10.9 average over the course of a season would be the seventh lowest).

This suggests Man Utd are doing more as a collective to force the opposition to concede the ball, even if Solskjaer’s players ran around a lot – closing down the ball without any real plan – just as much.

But we shouldn’t get too excited by that difference, because it is a small sample size skewed by the very low PPDA score in the games against Crystal Palace (7.6) and Newcastle United (6.2).

Newcastle’s average PPDA against is 8.56, so their backs-to-the-wall (34% possession) approach in their 1-1 draw with Man Utd was always going to gift Rangnick a low PPDA.

As for the Palace game, well, it acts as an emblem for what Man Utd could be and what they are not.

Rangnick’s side closed off the passing angles very well in a hard-pressing, high-intensity 4-2-2-2 that gave Palace no time on the ball.

They won the ball in the final third 12 times, the most in a single United league game since Alex Ferguson’s retirement. Ronaldo applied 11 pressures, his highest figure for the season.

And then United decided never to do it again.

Whether that’s ego getting in the way, a deliberate change of strategy from Rangnick, or the consequence of being a team people fear (not many try to pass their way out at Old Trafford like Palace did) is unclear.

What is clear is that Manchester United are not going to become a gegenpressing team under Rangnick.