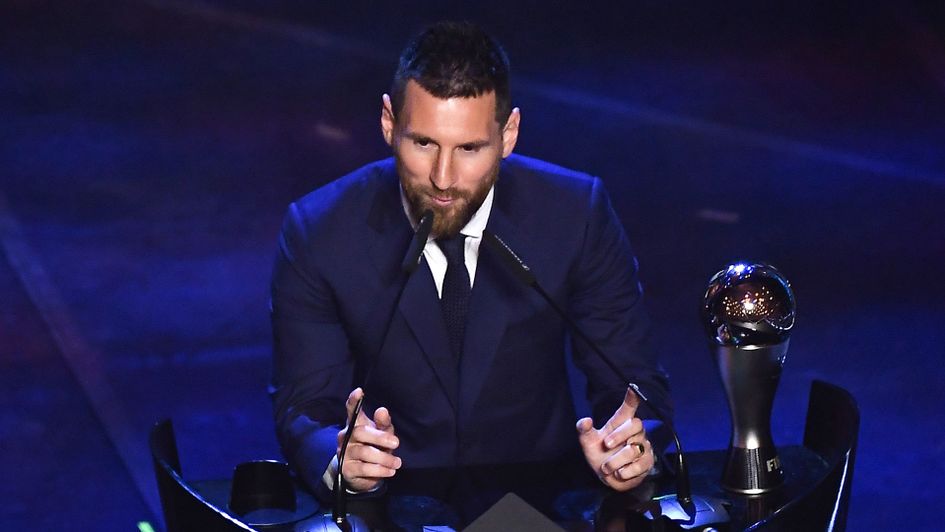 Lionel Messi has been named men's player of the year at the Best FIFA awards in Milan, beating Liverpool's Virgil van Dijk and Juventus' Cristiano Ronaldo.

The Barcelona legend has now won FIFA's top gong for a record sixth time in his career, taking him one clear of his great rival Ronaldo.

Messi may have felt disappointed with 'just' winning a 10th La Liga crown during the 2018-19 season after missing out on the Champions League with Barca and the Copa America with Argentina but he did score a staggering 51 goals for his club.

Many of those were fantastic but his most memorable will go down as his free kick against Liverpool in the Champions League and his Puskas award-nominated hat-trick goal against Real Betis.

Messi was expected to land the Puskas award for the first time in his career but despite a seventh nomination in its 11-year history, he missed out to Hungary's Daniel Zsori (more details here).

Van Dijk had been favourite to land the big award having pipped both superstars to the UEFA player of the year award last month, although he is still favourite for December's Ballon d'Or at 4/11 with Sky Bet (Messi 2/1, Ronaldo 20/1).

🤔 Looking at these results, where's your money now for the 'big one'.

Why Virgil van Dijk may feel hard done by...

Earlier Liverpool boss Jurgen Klopp has been named men's coach of the year at the Best FIFA awards in Milan, while Alisson Becker has scooped the goalkeeper prize.

Klopp guided his side to Champions League glory last season, while the Reds narrowly missed out on the Premier League title, being pipped by Manchester City.

The German claimed the award ahead of Tottenham boss Mauricio Pochettino, whose team Liverpool defeated in the Champions League final, and City's Pep Guardiola. 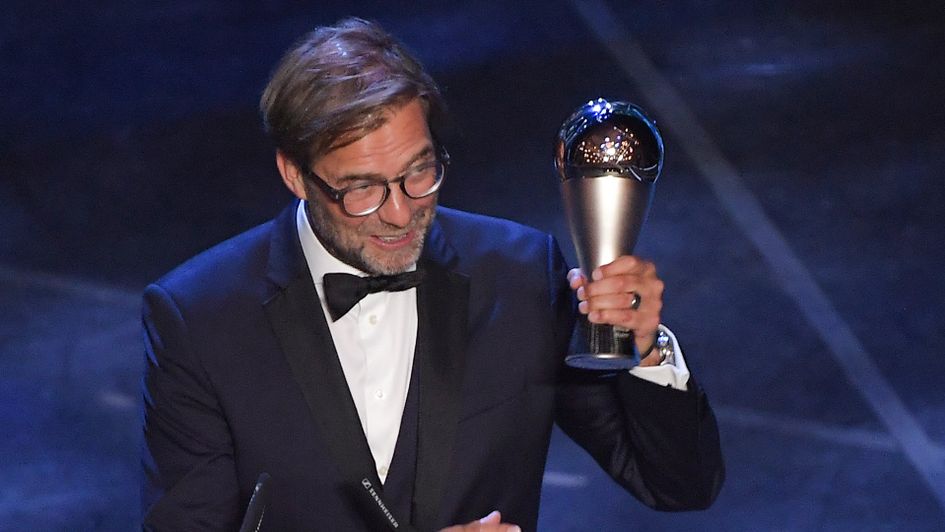 "I have to say thank you to my outstanding club Liverpool FC, to the owners, I have to say they gave me an incredible team, and I have to thank my team, because as a coach you only can be as good as your team is.

"I'm really proud of being the manager of such an incredible bunch of players."

Klopp also announced he had signed up to the Common Goal movement, in which members donate one per cent of their salary to a charity which funds organisations around the world that use football to tackle social issues.

He said: "I'm really proud and happy that I can announce that from today on I am a member of the Common Goal family."

Having then received a round of applause, Klopp said: "A few people obviously know it - if not, Google it. It's a great thing."

As well as helping his club win the Champions League last season and claiming the Premier League's Golden Glove with 21 clean sheets in 38 matches, Alisson was also part of the Brazil side that won the Copa America over the summer.

To the bemusement of many fans who have not always associated Leeds or Marcelo Bielsa with fair play, the veteran Argentinian and his players were awarded the Fair Play Award for allowing Aston Villa to score against them in April.

Angry scenes broke out after Mateusz Klich scored for Leeds while Villa's Jonathan Kodjia lay injured on the field. Bielsa insisted Leeds, despite the attempts of former defender Pontus Jansson to stop them, allow Villa to score immediately from the kick-off.

The women's Best player award went to US forward Megan Rapinoe, who was joint-top scorer and won the Golden Ball for best player at the World Cup.

Rapinoe took the award on Monday ahead of international team-mate Alex Morgan, who matched her in scoring six times during the summer's tournament in France, and England's Lucy Bronze, who was the Silver Ball winner at the World Cup.

During her speech, the 34-year-old mentioned various issues within the game, including racism, homophobia and equal pay, and said she had been inspired by England and Manchester City forward Raheem Sterling.

Rapinoe said: "I was going to say some of the stories that have inspired me most this year - Raheem Sterling and (Napoli defender Kalidou) Koulibaly, their incredible performances on the field, but the way that they have taken on the disgusting racism that they have to face, this year but probably for their whole lives.

"I feel like if we really want to have meaningful change, what I think is most inspiring would be if everybody other than Raheem Sterling and Koulibaly, if they were as outraged about racism as they were.

"I feel like that's my ask of everybody. We have such an incredible opportunity, being professional football players. We have incredible platforms. I ask everyone here - lend your platform to other people, lift other people up, share your success.

"We have a unique opportunity in football to use this beautiful game to actually change the world for better. I hope you take that to heart, and just do something, do anything. We have incredible power in this room."

Ellis became the first coach in history to win two Women's World Cups over the summer, having also overseen the US triumph in 2015.

Her side beat Neville's Lionesses in the semi-finals and Holland, whose boss Sarina Wiegman was also on the shortlist, in the final.

Messi was controversially omitted from the shortlist for the first time last year but is back after scoring 51 goals, including a brilliant free-kick in the Champions League semi-final first leg for Barcelona against Liverpool.

Two Champions League finals, one winner's medal and a Premier League near miss in 18 months emphasise the effect Virgil Van Dijk has had on Liverpool. A commanding presence and calm leader on the pitch, he was recognised by being named UEFA player of the year in August.

Portuguese superstar Ronaldo won Serie A in his first season with Juventus. He was the inaugural winner of the award in its current guise in 2016 and is now a four-time finalist.

🤔 So how did Lionel Messi, Cristiano Ronaldo and Virgil van Dijk vote?

USA's Megan Rapinoe became the poster girl for the Women's World Cup as much for her forthright opinions as her play on the pitch as the USA clinched victory. She was also the tournament's Golden Boot winner with six goals.

Morgan scored five goals in the USA's opening game against Thailand to equal the World Cup single-game record set in 1991. She also finished the tournament with six goals, losing out to Rapinoe on a fewest minutes tie-breaker.

Lucy Bronze was a standout performer for England's Lionesses on their run to the World Cup semi-finals and was recently named UEFA player of the year.

After missing out the previous year Jurgen Klopp guided Liverpool to Champions League victory in Madrid and also pushed City all the way in a thrilling title race.

Pep Guardiola secured back-to-back Premier League titles and completed a domestic treble in 2019 with his side playing scintillating football. However, he came up short in the Champions League having only reached the quarter-finals.

Mauricio Pochettino completes a Premier League clean sweep in this category after leading Tottenham to their first Champions League final, beating Borussia Dortmund, City and Ajax after coming through a tough group.

Alisson Becker won the Premier League's Golden Glove with 21 clean sheets in 38 matches in his first season in England. He played a key part in Liverpool's Champions League victory, not least the last-minute save he made to prevent a draw with Napoli which would have knocked them out at the group stage.

Zsori was just 18 when making his league debut and ended it by scoring a stoppage-time winner with an overhead kick!

😲🏆 Daniel Zsori wins the Puskas award thanks to this incredible goal for Debrecen!

👏 Bare in mind he was 18, making his senior debut against the league's leaders and it came in stoppage time...#TheBest #FIFAFootballAwardspic.twitter.com/gtBdZmeWNb

Lionel Messi sealed the 51st hat-trick of his sensational career in trademark genius fashion, delicately producing a first-time chipped effort over Real Betis goalkeeper Pau Lopez and in off the crossbar. Few would have complained if he bagged his first Puskas Award with this goal.

The Puskas awards wouldn't be the same without a Lionel Messi nomination.

😍 The chip to end all chips...pic.twitter.com/aPunAcC4UI

Juan Fernando Quintero was also in the running with a sensational free kick for River Plate in Argentina.

Click here to watch all the other previously nominated goals

Phil Neville re-energised England Women and guided them to a World Cup semi-final in France, where they lost to the USA.

The Americans' coach - Portsmouth-born Jill Ellis - joined Neville on the shortlist along with Holland coach Sarina Wiegman, who led the European nation to the final.

To the bemusement of many fans who have not always associated Leeds or Bielsa with fair play, the veteran Argentinian and his players were awarded the Fair Play Award for allowing Aston Villa to score against them in April.

Angry scenes broke out after Mateusz Klich scored for Leeds while Villa's Jonathan Kodjia lay injured on the field. Bielsa insisted Leeds, despite the attempts of former defender Pontus Jansson to stop them, allow Villa to score immediately from the kick-off.

Captain Liam Cooper and fitness coach Benoit Delaval collected the award on Bielsa's behalf at the ceremony in Milan.

Congratulations to all! Well deserved! 👏🎉🎊

How does the voting work?

The remaining 75% of the votes come from the national coaches of FIFA Member Associations, their team captains and a select group of football journalists from those countries.