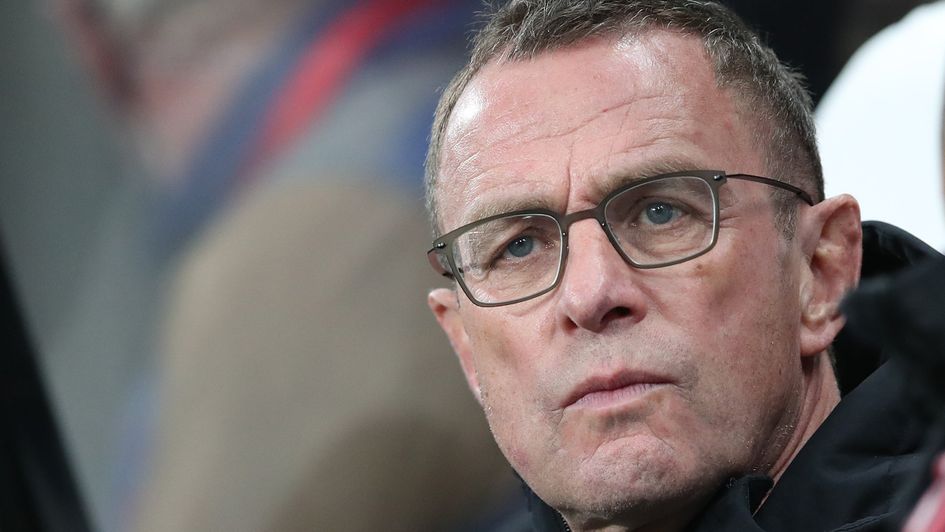 Ralf Rangnick has only lost once but is already being criticised

Man Utd and Ralf Rangnick: Why is it not working and can he fix it?

As a Liverpool icon returning to Old Trafford for the first time as a manager, Steven Gerrard could not have asked for a better moment to face Manchester United – a club in semi-permanent crisis.

Ralf Rangnick was supposed to lay the tentative foundations for a tactical revolution, to begin the long process of modernisation, something that would obviously require patience; an intelligent and measured response from everyone at the club.

It is telling that within one short, Covid-disrupted month there is apparent disarray, certain players recently revealing how "underwhelmed" they had been with Rangnick's coaching and tactics, whilst the board has undermined his reign from the outset with a vague promise of a 'consultant' role after a short interim period in charge.

Gerrard, after laying into his players for not giving it their all in a 2-1 defeat to Brentford, will be relishing the chance of an upset in Monday night's FA Cup third round.

Aston Villa have already won at Old Trafford this season when Ole Gunnar Solskjaer and Dean Smith were in charge, ending a 12-year hex, and yet they will feel there is still a score to settle in the FA Cup.

Bizarrely, Villa were drawn against United in the third round four times in a seven-year spell between 2002 and 2008, losing every one.

Monday could be the moment to reset an FA Cup curse. Tactically speaking, there is certainly a lot of evidence that Rangnick's calamitous 4-2-2-2 and Gerrard's unusual Christmas tree formation gives the visitors an edge.

The basic idea of the 4-2-2-2 is to press hard and play quick football straight through the lines in the transition – i.e. as soon as the ball is won and the opposition is out of shape.

We have seen very brief glimpses of this, when a front four has torn forward together and been a mis-hit pass away from a two on one, but on the whole an inability to press has seen it fall apart.

United could scarcely be more disordered, seemingly unaware of how to collectively press after years of non-coaching from Ole Gunnar Solskjaer (Covid complications and the Christmas schedule mean Rangnick has only had a few days on the training ground).

Without this crucial element, suddenly the 4-2-2-2 is hopelessly decompressed, causing problems both on and off the ball. 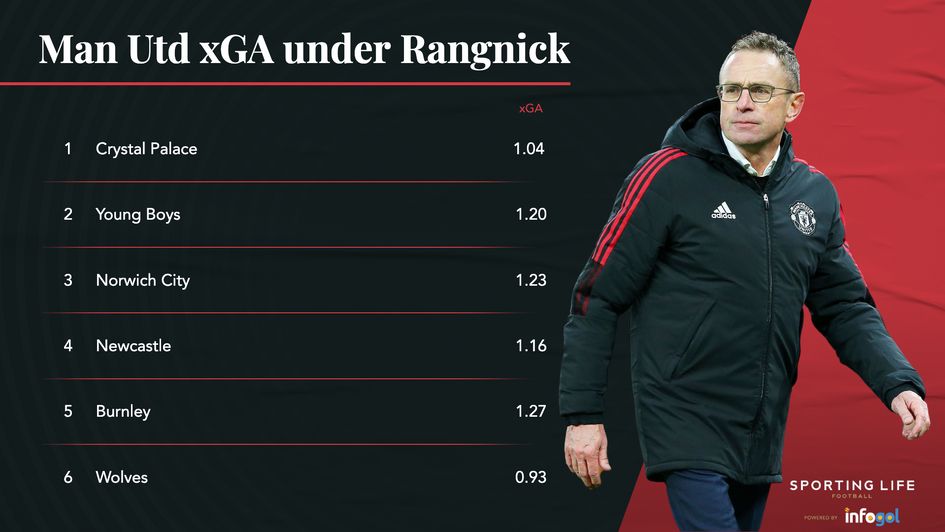 Is Rangnick out of his depth?

Firstly, and most importantly, this Germanic style of transition-based football just isn't suited to a club forced to dominate possession and territory; Rangnick has never managed at such an elite level, and it is showing.

Opponents are sitting back and packing the middle with bodies, and without an attacking midfielder (United's two inside forwards drift wide to find the space) Rangnick's side are essentially forming a huge O-shape, emptying midfield.

Unsurprisingly, driving down the flanks in the hope of cutting a pass back infield into the strikers doesn't really work. Worse still, United's forwards are showing a strange tendency to come towards the ball, playing statically in front of the opposition when the manager specifically demands urgent runs beyond the defence.

Off the ball, a 4-2-2-2 is maddeningly open through the middle without the sort of collective pressing, high line, and short distances between the lines that can only come from long hours on the training field. 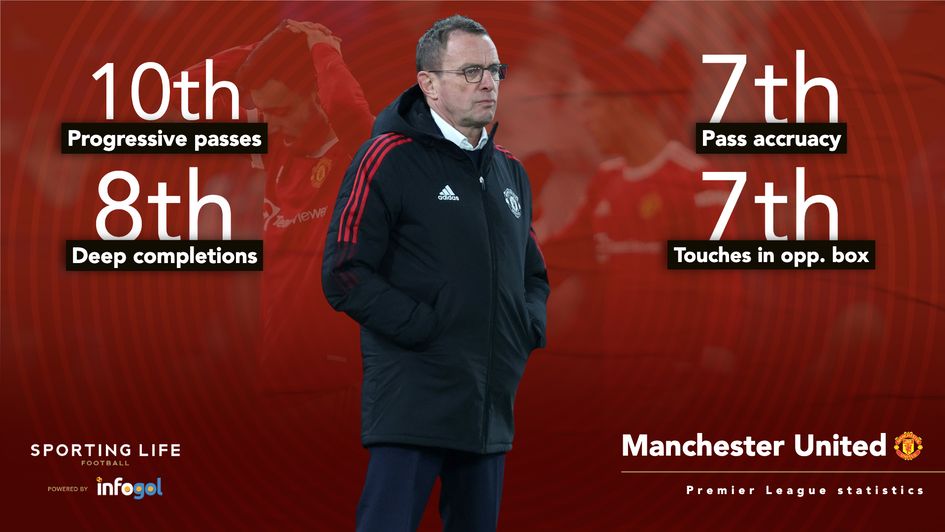 That is why Wolves in particular found it so easy to simply dribble in diagonal lines, from the wing into the centre, and break through; a 4-2-2-2 essentially forms square shapes - rather than triangles - all over the pitch, which is a far less robust.

But the dreadful tactical setup isn't just about failing to do anything with possession and getting caught on the counter. Even when United fell back and Wolves had the ball, things went sour.

Bruno Lage's 3-4-2-1 meant Ruben Neves and Joao Moutinho occupied McTominay and Matic, leaving inside forwards Daniel Podence and Trincao free to create chances in areas where United had nobody defending; their flat back four was rarely helped by the two wide forwards.

Ruben Neves, who could cost at least £40m, has long-time admirers at Man United & impressed at Old Trafford on Monday.

Per game this season, he is averaging:

And is in the top 10 for successful dribbles - behind Fred in second:

This final point is of most relevance to Villa, who under Gerrard have deployed a 4-3-2-1 formation in which two number tens sit behind the striker.

That roughly emulates how Wolves managed to pick holes in the Man Utd system, and could be fruitful if Villa manage to play with the energy and assertiveness that characterised confrontational recent displays against Liverpool and Manchester City.

In short, United are there for the taking - passive and fractured - in a shape that should allow Emiliano Buendia and Anwar El Ghazi to get plenty of space on the ball working from outside to in; getting into the gaps either side of Matic and McTominay and behind Mason Greenwood and Jadon Sancho.

John McGinn’s suspension will make it more difficult for Villa to sustain meaningful possession from within United territory, however, and the pattern of the game is more likely to see the away team camped in their own half.

But even here, the formation favours Villa. They have shown a tendency to press very effectively in the middle third of the pitch, while the inside forwards are ensuring the central column is largely blocked off.

This should force the hosts into more clumsy passing down the wings and that awkward O-shape returning.

Villa counter attack will cause problems

Finally, the emphasis on verticality we have seen under Gerrard should help counter-attack through the huge holes in the 4-2-2-2.

Jacob Ramsey’s bursting, Gerrard-like dribbles can surely catch Matic and McTominay flat-footed as United’s front four watch on, while Matty Cash – an important overlapping threat under the new regime – can catch Sancho daydreaming, just as Nelson Semedo did repeatedly at the weekend.

A lot points to an upset at Old Trafford, then, unless Villa are as oddly meek as they were against Brentford – or unless the growing problems for Rangnick, exacerbated by damaging leaks to the press, lead to a major rethink.

He switched to a 3-4-1-2 formation in the second half against Wolves, bringing on Bruno Fernandes in an attacking midfield role and (briefly) swinging the momentum of the game.

That at least shows Rangnick possesses humility and flexibility.

Perhaps there is a trick up his sleeve for the double-header against Villa in the FA Cup and Premier League over the next week; perhaps we will see a shift to something a bit simpler, more individualistic, and readily digestible.

That is what's needed for a squad used to being given too much power, but more crucially, too little tactical coaching. 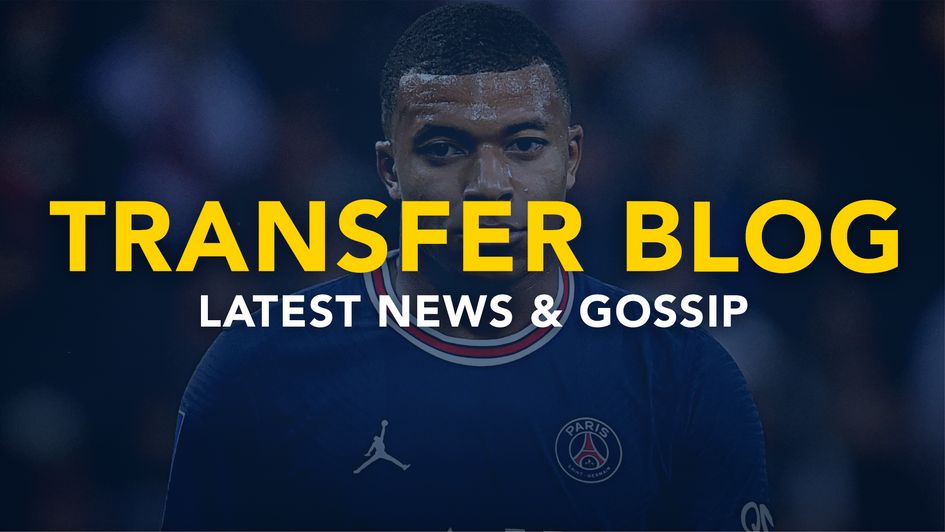