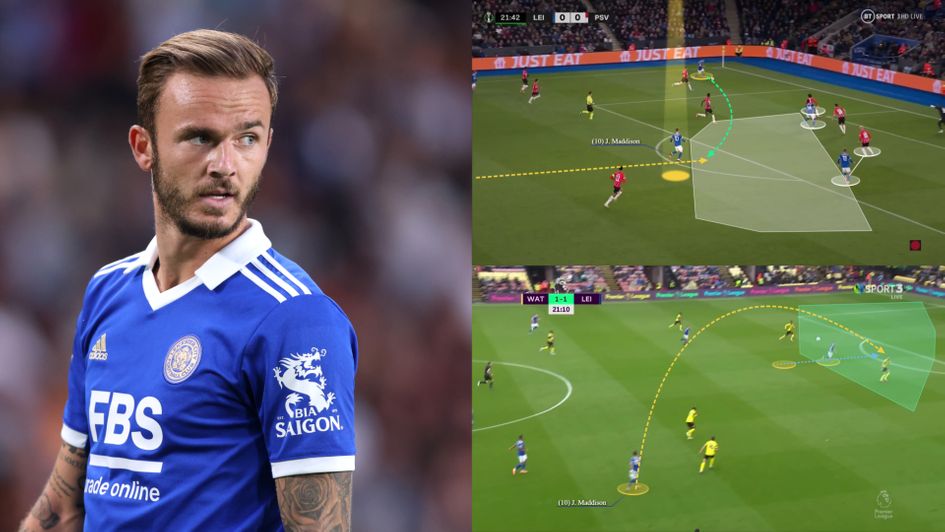 James Maddison: Where would he fit in at Newcastle?

With reports circulating in earnest of Newcastle United's desire to sign Leicester City star James Maddison, it'll be fascinating to observe how this saga pans out, with a tug of war set to ensue between both parties.

Desperate to further strengthen their squad ahead of the new season, the Magpies apparently have already had a bid of £40 million rejected on the weekend and have subsequently since upped their bid to £50 million.

But if the rumours are to be believed, the Foxes won't accept anything less than £60 million, with Brendan Rodgers making his feelings clear that he doesn't want to lose the Englishman under any circumstances.

"There is obviously, within the club, a financial situation which isn't ideal in terms of wanting to do business. It doesn't mean we will be exploited and we don't want to be losing our best players," asserted the Leicester manager on the situation.

"You don't want to lose your best players and then not be able to bring any in. That doesn't stack up. With James, he is looking the best he has in my time here. He is a joy to work with.

"I love him as a young guy, seeing him grow from when I first came in to being a 25-year-old father. He is really pivotal to us. There is no way I would want to sell him."

Considering Newcastle boss Eddie Howe prefers to play a 4-3-3, it's understandable why he's identified Maddison as an ideal man to reinforce his midfield. Shining especially brightly within the same formation at Leicester last term, he relished operating as an eight with plenty of freedom on his way to being a real bright spark in what was a challenging crusade for Rodgers' men.

Underlining his intelligence and awareness, it was a joy to watch how effectively the 25-year-old found space in between the lines and in the half spaces. Venturing wisely into these zones after scanning his surroundings and noticing when opponents were preoccupied or out of position, he excelled at connecting and breathing life into attacks while regularly receiving in ideal forward facing body postures. 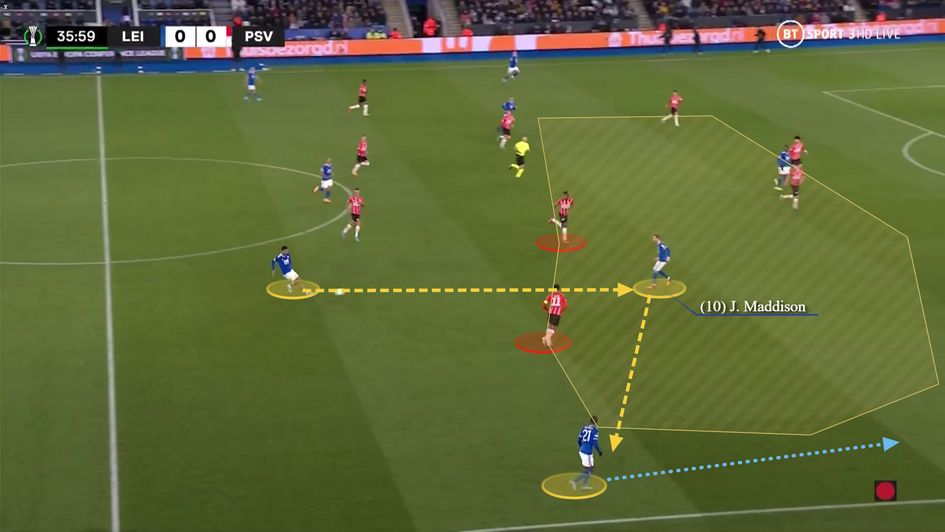 In addition, how he helped form overloads in wide areas, dropped deeper near the lone pivot to use his playmaking qualities from deep, embarked on some penetrative, late arriving runs into the box and executed smooth rotations with his colleagues amplified his menace. 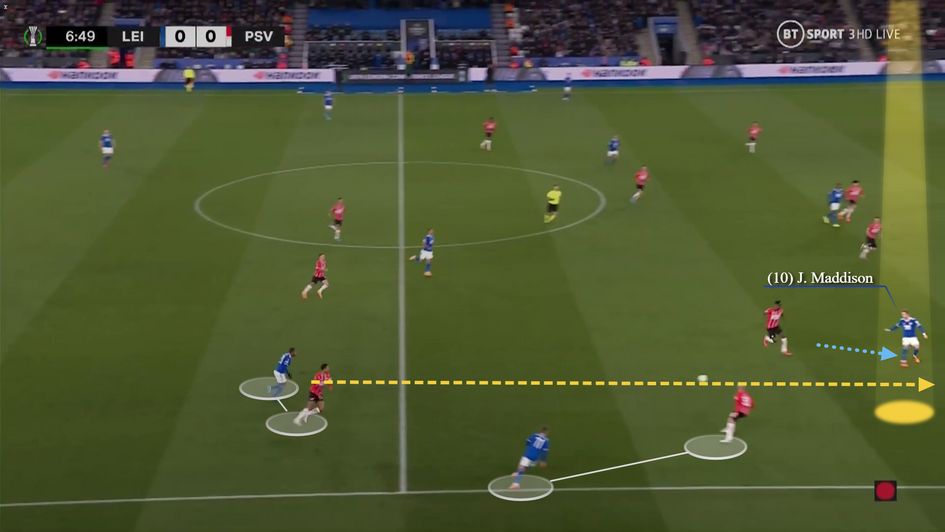 Awesome channel run by Maddison to exploit the created space 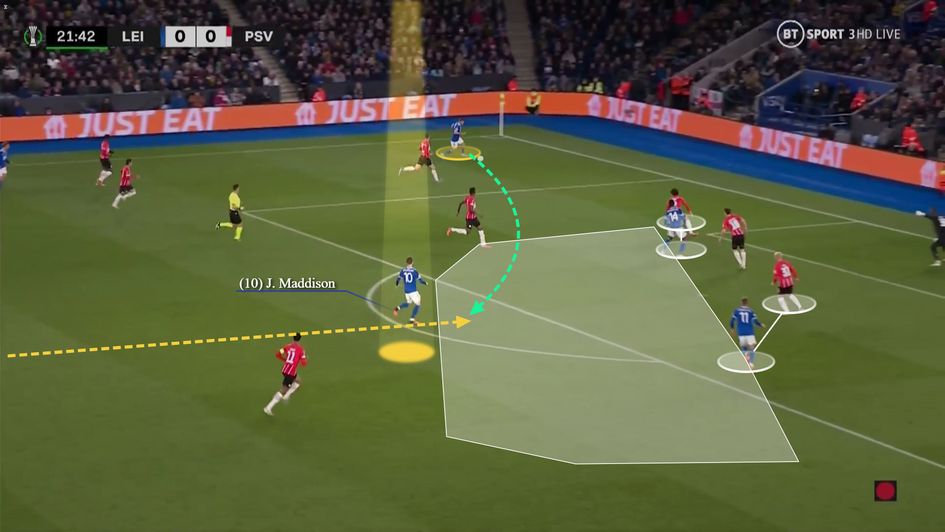 To focus on the latter, it was brilliant to see him interchanging with his nearby winger and fullback, with these interactions doing a fine job of unbalancing backlines and opening up space in behind and in front of defensive units.

As a result, Maddison could act as an auxiliary fullback to enjoy time and space to dictate proceedings, burst upfield via dangerous depth runs and drew opponents to generate space for others to exploit. 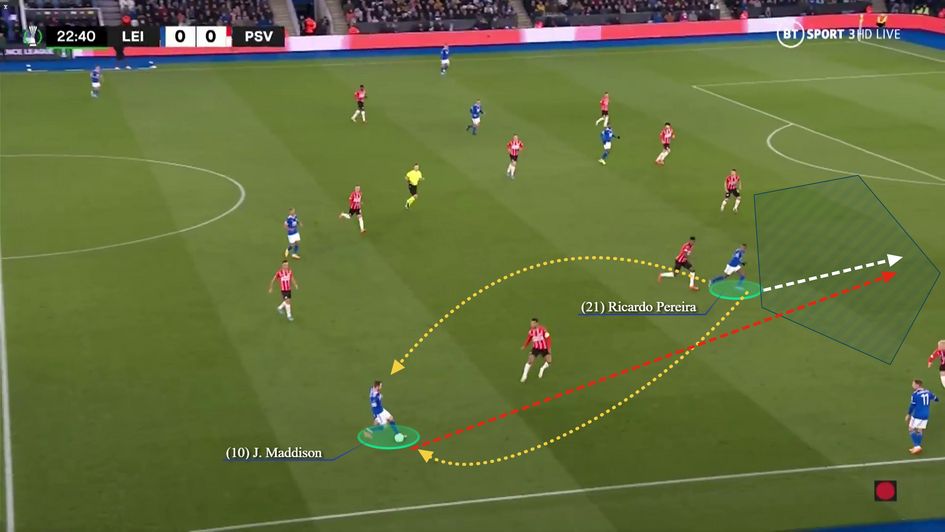 Smart rotation between Maddison and fullback Pereira causes a breakthrough 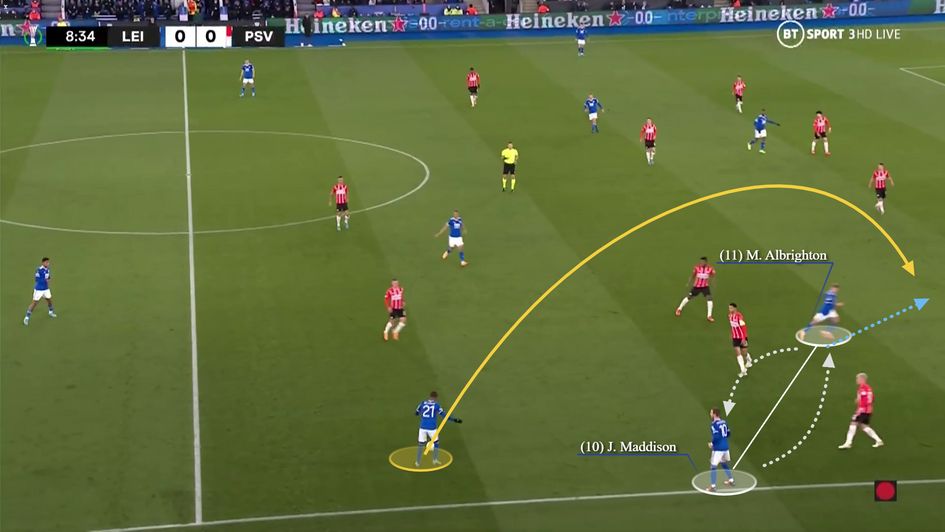 An absolute wizard with the ball at his feet, Maddison's aptitude here accompanies the aforementioned superbly. To start with his passing, and the way he can unlock rearguards with defence splitting through balls on the ground and in the air, hit vertical or diagonal line breaking passes into the feet of attackers, switch the play with aplomb and strike some wonderful crosses and cutbacks into the box are vital elements of his armoury. 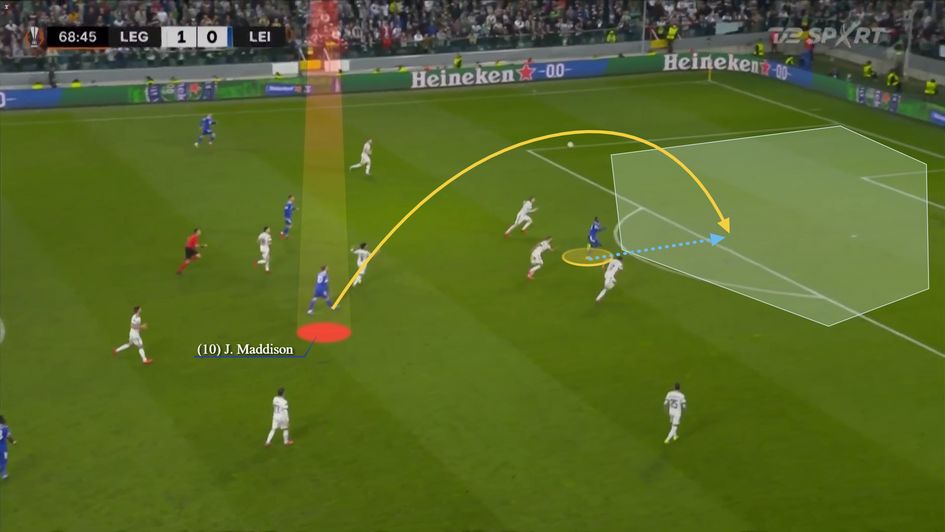 Classy lofted through ball over the top 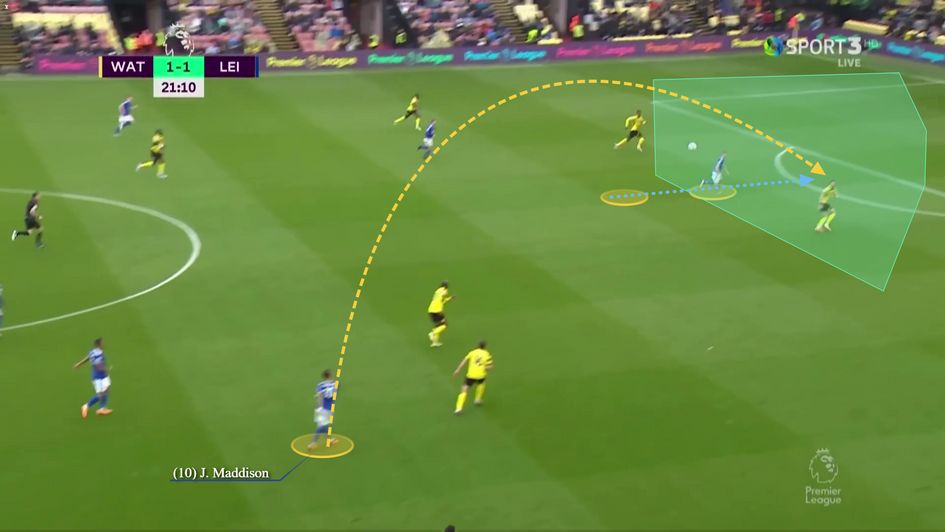 Sublime through ball in behind 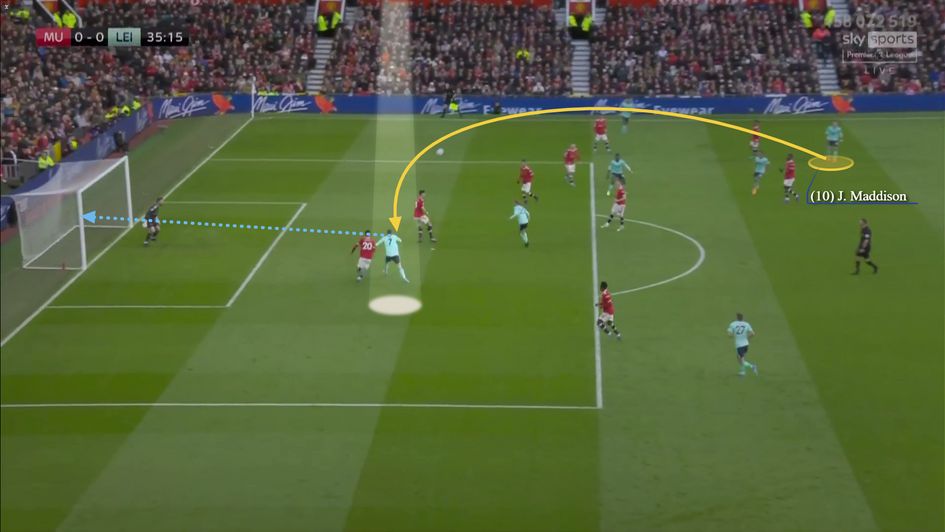 Masterful dipping cross into the box

Blessed with an immaculate, distinctive ball striking technique that allows him to impart plenty of whip, dip and swerve while getting plenty of power and being accurate, this ensures he's a weapon from set pieces all over too.

It also warrants mention how he can engage in intricate combination play in close quarters, incisively kickstart counters and uses his eyes and body shape to deceptively disguise his intentions.

“He has the last pass you don’t see in a lot of midfield players. He is a huge talent and he can play forward very quickly because he has vision in his game. We want to add intensity and goalscoring to help him. He is a wonderful player and he has made great strides. I see a lot of potential and he is willing to work on his game," explained England coach Gareth Southgate.

"He’s a player of outstanding technical ability. He has an eye for an incisive pass, his set-play delivery is world class – absolutely top."

Quick of thought and fleet of foot, Maddison's neat first touch and ball control importantly help him weave out of danger, cut inside to open up the field, lure out pressers to manufacture a free man and outfox opponents with some clever touches and feints.

Possessing a keen eye for goal too, the man who bagged an impressive 18 goals in all competitions to go with his 12 assists is a massive threat when in range. Capable of finding the back of the net with searing long range shots and free kicks, clinical penalties, when opening up his body to place his finishes and when coolly beating the keeper 1v1 to find the corners, this compounds issues for his opponents. 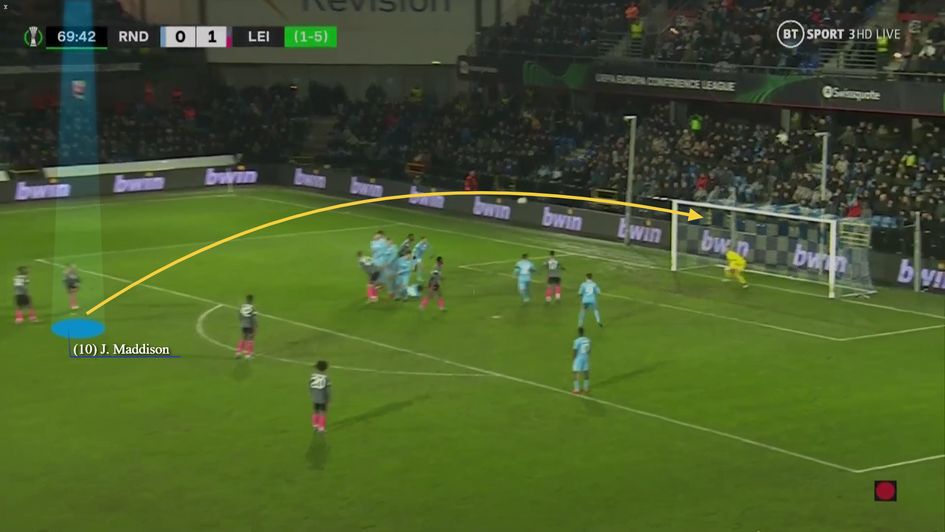 Magical free kick from range into the top corner 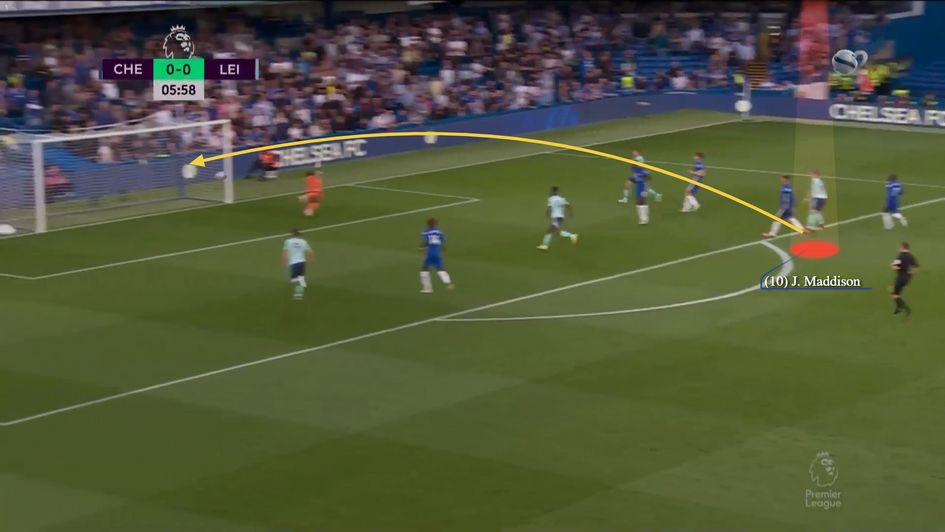 Wonderful powerful curling finish from the edge of the box 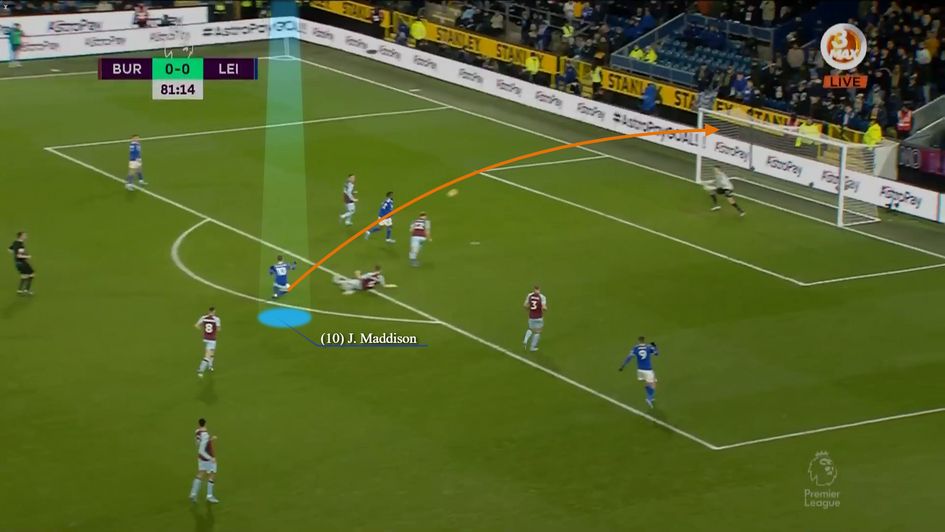 Exquisite left footed finish as he opens up is body beautifully

By the numbers, upon comparing him to Newcastle's Brazilian midfield dynamo in Joelinton using Wyscout data, Maddison certainly holds the ascendancy in a plethora of offensive metrics related to goalscoring, shooting, chance creation, progressive passing, dribbling and touches inside the box. 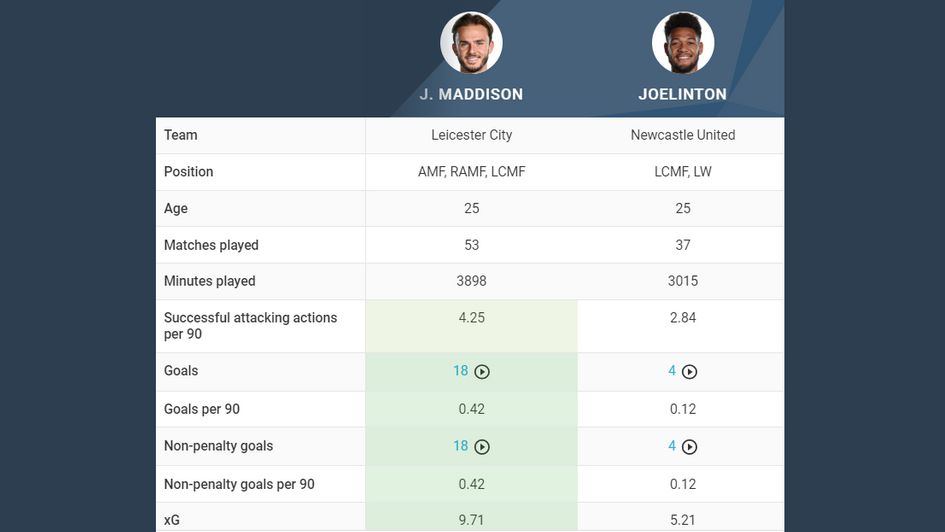 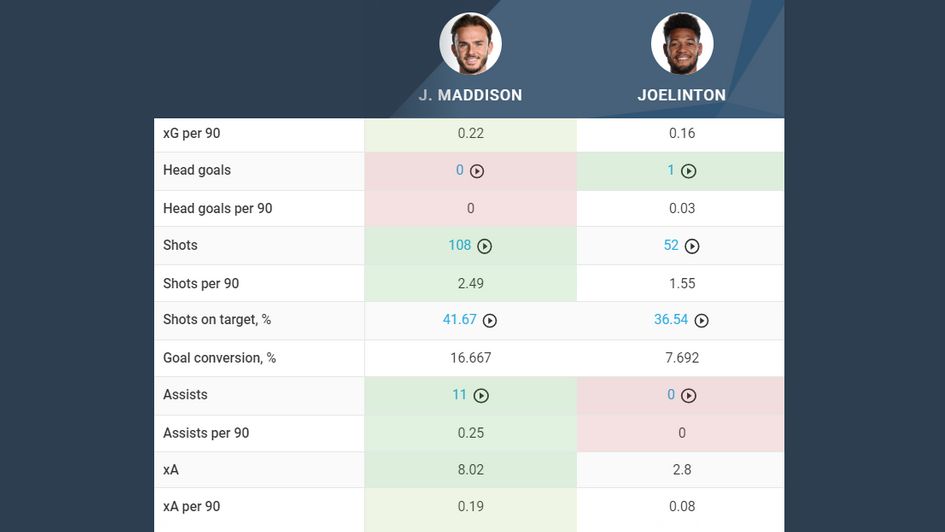 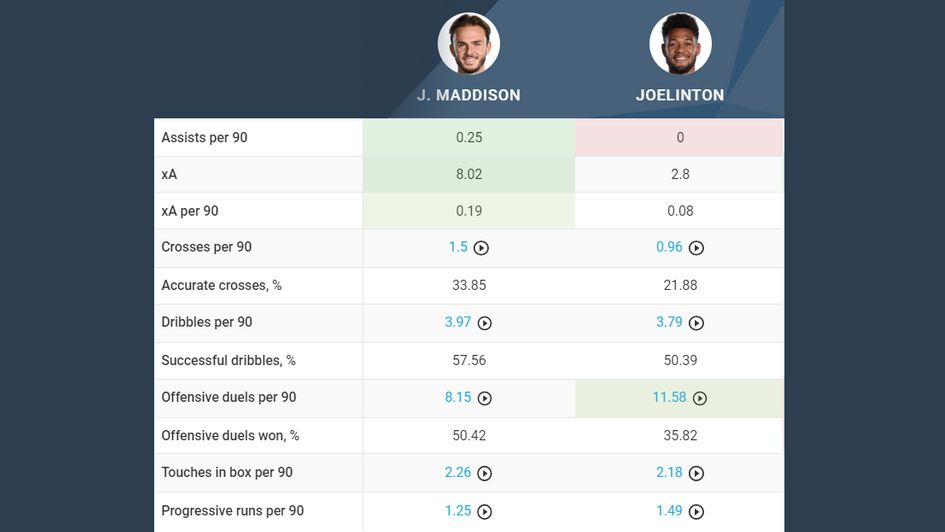 While not anywhere near as effective as the physically imposing Joelinton is defensively, as evidenced in the table below, he’s still shown he can admirably contribute in this phase, with his deficiencies in this area nothing to be overly concerned about due to the more ambitious role he usually operates in.

A unique midfielder who can both score and create, it's easy to see why Newcastle are so keen on snapping up the imaginative, ingenuitive and confident Maddison. The fact he knows the Premier League so well, is a proven performer at the highest level and should have little worry adapting to the mechanics and concepts of Howe's 4-3-3 further illustrates what a shrewd acquisition he'd be.

In what's set to be an captivating battle for the gifted Maddison, who's entering the prime of his career, it'll be a case of watch this space to see where he'll be plying his trade, with both Leicester and Newcastle seemingly willing to do everything in their power to ensure he's their player next season.