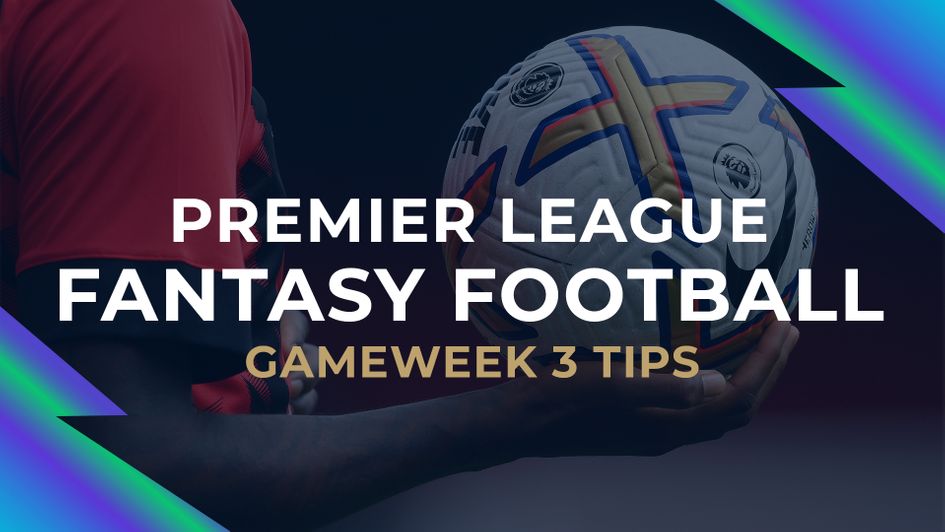 Two gameweeks of the fantasy football season have passed and the FPL average across both was exactly the same.

The points tally to hit is 57 to keep up with the majority of players - although we're so early into the season there is little reason to panic if it's not quite at that stage.

The team of the week again was full of players not owned by many. Joel Veltman, Granit Xhaka, Pierre-Emile Højbjerg, Mathias Jensen and Ben Mee currently sitting at 2.0% of lower.

Rodrigo - flagged as a good alternative pick in our pre-season column - is currently the top points scorer on FPL following three goals in his two outings - that's delivered 22 points and seen his ownership figure shoot up to 9.4%. 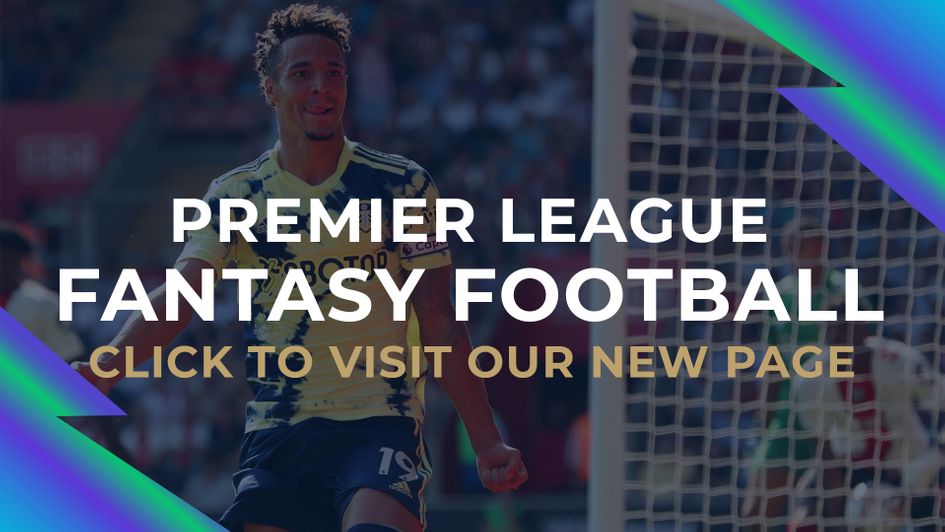 When should I use my FPL wildcard?

The question of when to use the wildcards is always a big one. It is key to success, but it can also prove problematic if too many gameweeks are left between the chips being available.

Typically, you'd have one wildcard available for the first-half of the campaign and one for the second. In a usual season, avoiding the temptation to wildcard early is key.

However, this isn't a normal season.

The World Cup in Qatar - which begins in November - means that an early wildcard may not be the worst decision if things haven't quite gone to plan in the opening parts of the season. 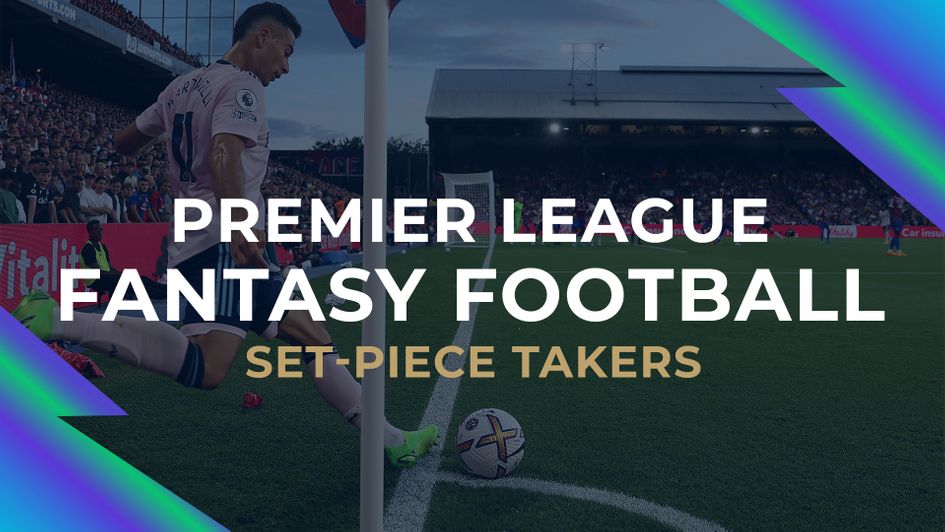 Using the wildcard in the opening exchanges of the season would usually mean you may have to wait 25 or so gameweeks before being able to make a significant number of changes again.

The 22/23 campaign is different - as managers will be able to make unlimited transfers following the Gameweek 16 deadline.

Therefore, playing your first wildcard over the next couple of weeks means that you'd only have between 10-13 rounds of fixtures before being able to make a number of transfers again.

Gameweek 3 is a very aggressive strategy when it comes to a wildcard but it carries far less risk than previous seasons. It's also worth it if the make-up of the squad means that multiple players aren't performing (or suspended, Mr. Nunez).

When are the FPL wildcards?

When is the FPL Gameweek 3 deadline?

Who has the best fixtures in Gameweek 3? 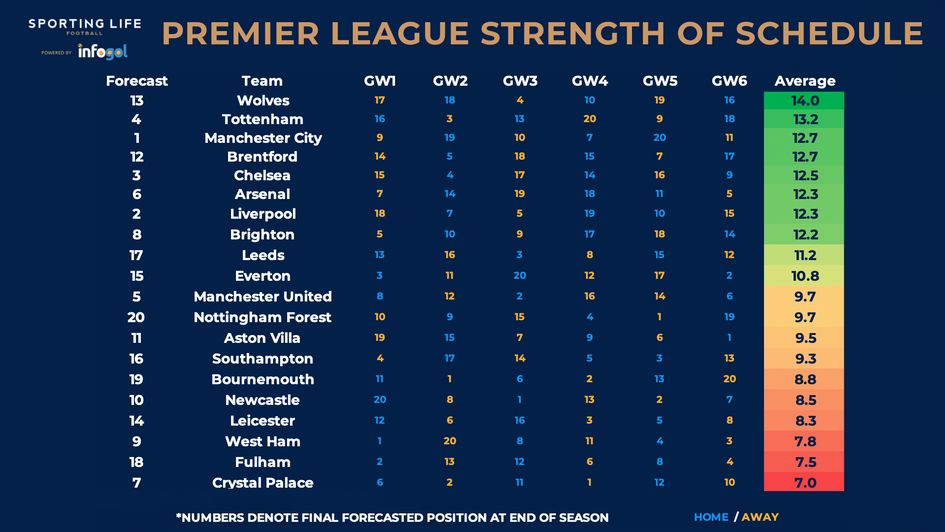 According to FPL's Fixture Difficulty Rating - the higher the number, the tougher the game - the teams are split as follows:

Even with their poor start to the season, LEICESTER assets may prove to be good differential options as they face another struggling side in Southampton.

NOTTINGHAM FOREST or EVERTON defensive assets may also return clean sheet points as that could be a low-scoring contest, while LIVERPOOL's trip to Manchester United doesn't feel like a '4' rating given what we have seen from Erik ten Hag's side so far.

Bournemouth conceded four away at Manchester City - and while that may have only come from 1.68 xG - ARSENAL will fancy their chances of success following four goals against Leicester (3.15 xG) and two v Palace (1.49 xG).

What are the best transfers for Gameweek 3? 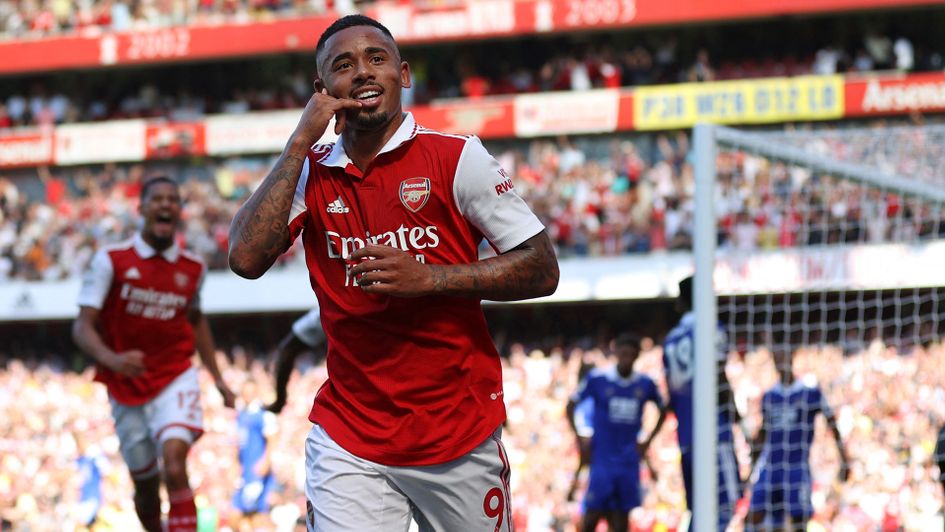 This is the week that you will start to see more people use the wildcard when scouting the FPL hashtag on Twitter - the World Cup break has added a different dimension when it comes to transfer and chip planning.

There's no right or wrong answer to that, but as stated earlier on in this column, it's nowhere near as bad using it this early as would be the case in previous seasons.

But for those just focusing on the one free transfer - potentially two - or willing to take a small points hit to add another player, who are the ones to target for Gameweek 3? 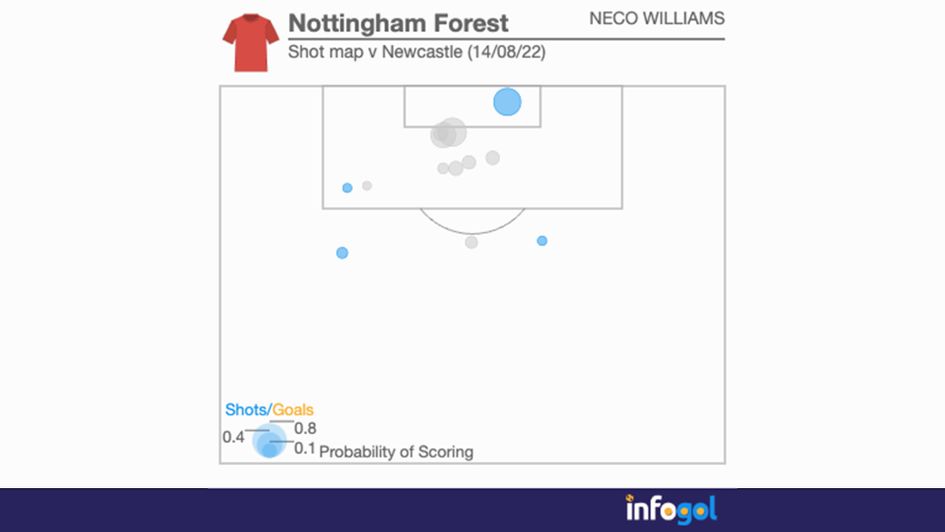 Neco Williams has already found himself as a popular selection on fantasy football this season.

He carries an extremely low price tag but gets regular minutes as a starter for Nottingham Forest - it's why the right-back already has an FPL selection rate of 28.3%.

A game against Everton could well bring a clean sheet given the Toffees' problems in attack, but he may also secure a goal or an assist based on his performance against West Ham last time out.

Williams had four shots in that game - two of which were on target - totalling a considerable 0.6 xG. 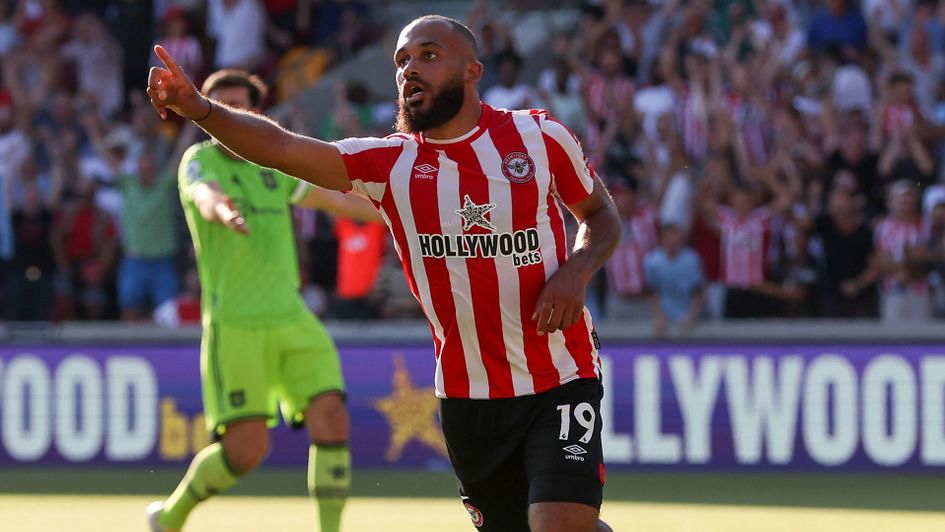 Much of the focus when it comes to Brentford attacking assets is on Ivan Toney, but Bryan Mbeumo could well prove to be a solid differential option as they embark on a run of five fixtures labelled '2' on the FDR.

This week takes them to Fulham, who have two draws on their tally. The Bees are buzzing though, with a 4-0 win over Manchester United highlighting their strength in attack and the confidence they currently have.

Mbeumo had two shots in that win over United - one of which was on target and that found the net. His efforts totalled to 0.56 xG and it meant he's posted a shot on target in each of his two appearances so far.

While Toney is on penalty duty, Mbeumo does have some direct free-kick involvement alongside potentially being one at crossing opportunities. He is likely to take spot kicks if Toney isn't on the pitch.

At the time of writing, 487,569 players have transferred in Josh Dasilva while 411,940 have gone for Toney - Mbeumo can provide points that others won't have. 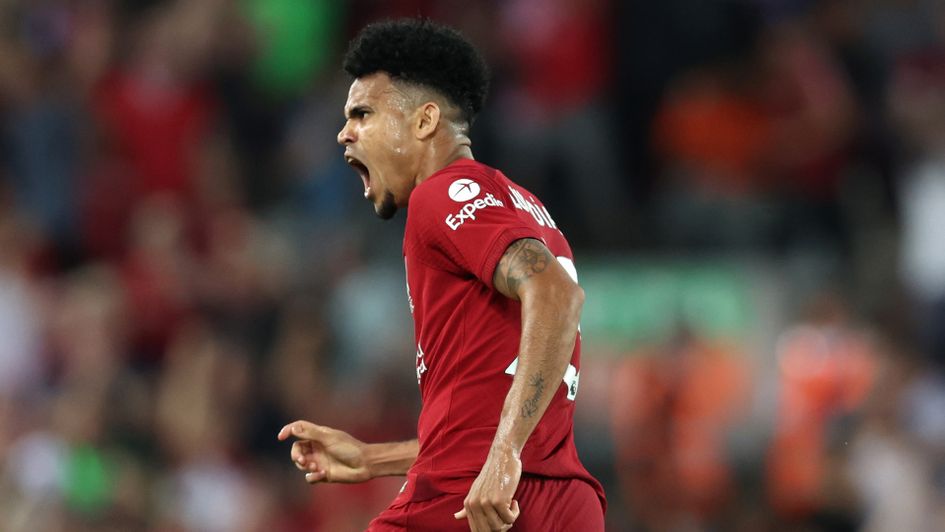 Manchester United away does not feel like a fixture which should now be rated '4' on the FDR. Erik ten Hag's side's start to the season has been awful and this Liverpool attack can punish them.

This Liverpool front line looks very different to the one we have typically seen across the past few seasons, and after his goal on Monday night, Luis Diaz looks too good to ignore at a cost of £8.0m.

The forward has been a hit since joining the Reds in January and finished last season with an average of 0.37 xG/95. He also had three goals and four assists on his tally, meaning that he averaged 0.54 goal involvements per game.

Without trying to make things sound a lot simpler than they are, Diaz's half-season rate would result in around 14 goals across an actual 38-game campaign, alongside 10 assists.

Salah has been the star of this Liverpool attack, but Diaz could well become one of the best value picks this season. 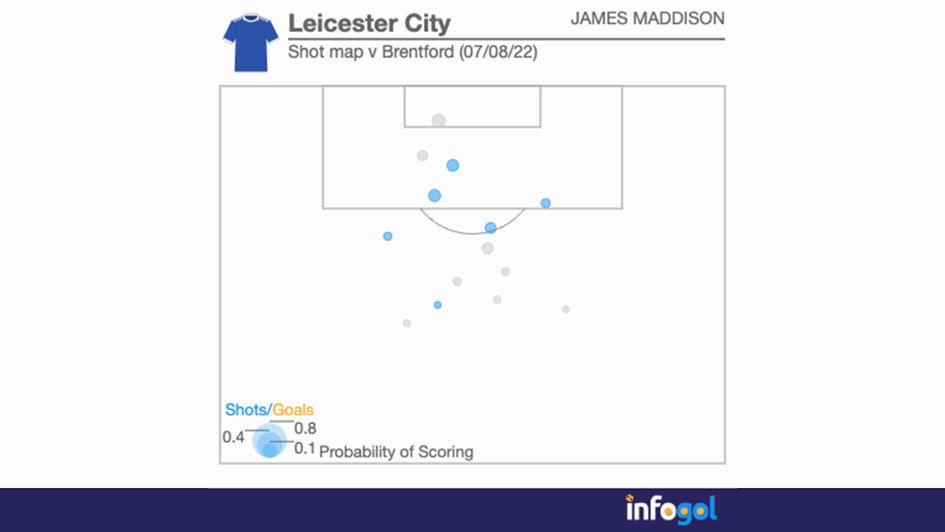 James Maddison found the net as Leicester were beaten by Arsenal in Gameweek 2, and he could have scored in the week prior after a huge total of six shots against Brentford.

A return to the King Power Stadium should see further opportunities against a side who have conceded six goals and 3.89 xG in their two Premier League games so far.

Maddison remains a main attacking threat for the Foxes, with 12 goals and eight assists on his tally at the end of the 21/22 season. He can strike in open play while also being trusted in multiple set-piece situations.

Leicester had issues defending set-pieces last season but so too did Southampton - while the Saints have already conceded twice in the 22/23 campaign. There is huge goal or assist potential for Maddison this weekend.

Who are the most transferred in players for Gameweek 3? 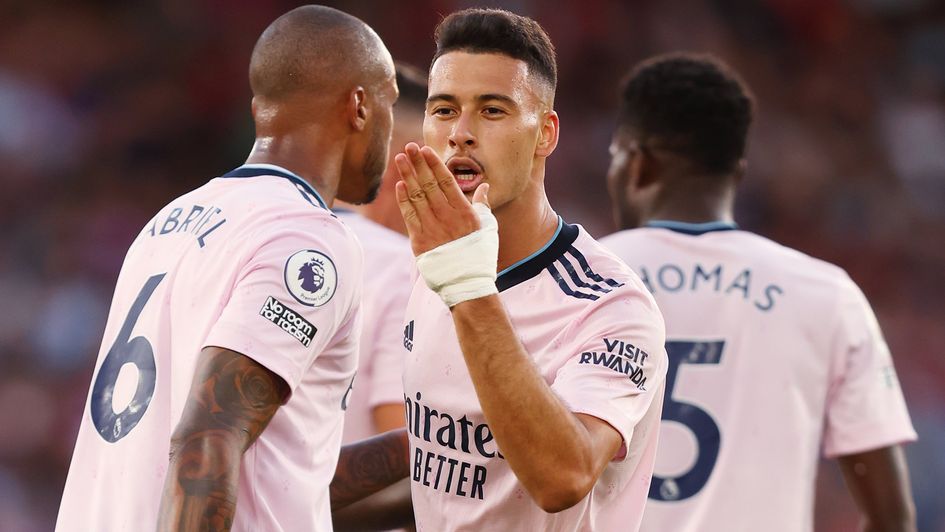 As of 0800 BST on Wednesday, the most transferred in players - according to FPL - are:

Who should I captain in Gameweek 3? 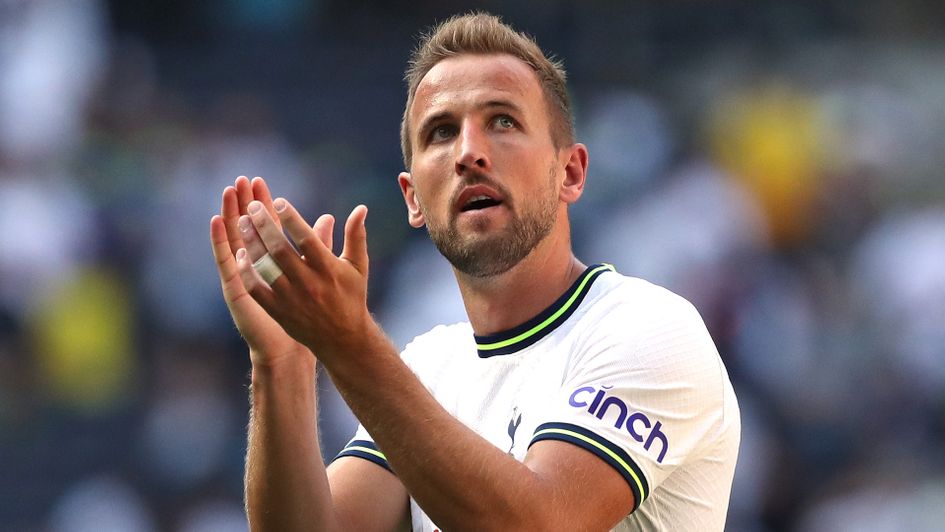 Manchester United have conceded six from their opening two games, and even the 3.58 xG that has come from shows they have been seeing plenty of chances against.

Liverpool - despite the fact that only have two points on their tally - have generated the most xG in the Premier League this season. The 4.75 has resulted in three goals and they will be looking forward to facing this United defence.

Darwin Nunez's suspension could mean that we see Diaz playing more centrally, but the main thing is that we can be very confident of both Diaz and Salah's involvement.

Manchester City travel to Newcastle and ERLING HAALAND will remain a popular pick regardless of fixture this season.

One to target could be Tottenham who have six goals on their tally so far. They host Wolves in Saturday's early kick-off - a team who have conceded 2.85 xG across their two games.

HARRY KANE scored as they drew with Chelsea last weekend, but SON HEUNG-MIN's quiet campaign so far surely can't go on for much longer.