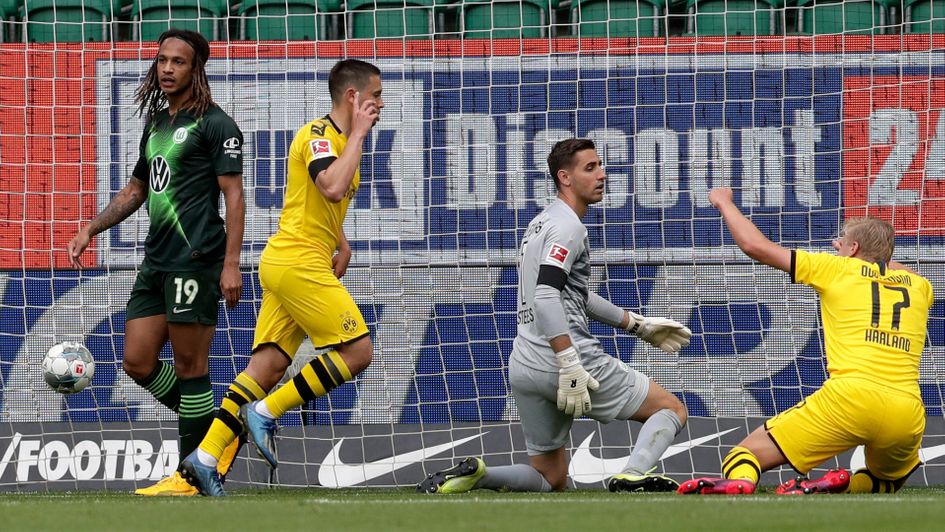 A review of Saturday's action in the Bundesliga, as Borussia Dortmund and Bayern Munich secured victory while Leverkusen beat top-four rivals Monchengladbach.

Jadon Sancho came off the bench to help boost Borussia Dortmund’s Bundesliga title hopes with a 2-0 win at Wolfsburg.

Sancho, who is still being used sparingly after a groin strain, launched a lightning counter-attack which ended in Achraf Hakimi firing his side’s second goal in the 78th minute.

Raphael Guerreiro had put the visitors in front in the 32nd minute and the late dismissal of Felix Klaus for a foul on Manuel Akanji ended any Wolfsburg hopes of getting back in the match.

With Tuesday night’s potential title decider against Bayern Munich looming, Dortmund, who started the day four points adrift of their rivals, knew they could not afford any slip-ups.

But although they made a lively start they created few clear-cut chances and Wolfsburg’s Wout Weghorst came close to giving his side the lead with a 25th minute header.

Dortmund settled their nerves in the 32nd minute when Guerreiro knocked home an unmissable opener from close-range after Thorgan Hazard drove the ball across the six-yard box.

Hazard came close to increasing Dortmund’s lead just before the break but he just failed to react quickly enough to reach a similar ball across the box from Hakimi.

The home side started the second half in impressive fashion and should have equalised in the 48th minute when the unmarked Renato Steffen ballooned a simple effort over the bar with only keeper Roman Burki to beat.

Daniel Ginczek came close from a tight angle before Weghorst caught the visiting defence napping with a dangerous ball across the face of the box which eluded his team-mates.

🔥 Jadon Sancho provides the impact Dortmund needed from the bench!

🤝 He grabs an assist as Achraf Hakimi finds the back of the net.

Sancho made his introduction when he replaced Julian Brandt in the 65th minute and, after flapping at his first effort, he turned provider with his mazy run and unselfish lay-off to Hakimi.

Klaus was rightly dismissed for his hack at the back of Akanji’s leg four minutes later, then Sancho turned provider again to flick Haaland clear, only for the in-form striker to uncharacteristically fluff his chance to make it three.

Bayern Munich re-established their four-point lead at the top of the Bundesliga by beating Eintracht Frankfurt 5-2 at the Allianz Arena.

After Borussia Dortmund had moved to within a point of them thanks to victory at Wolfsburg earlier on Saturday, Bayern needed to respond ahead of the sides' crucial midweek meeting.

And aside from five minutes of lax second-half defending, Hansi Flick's team were largely untroubled.

While Dortmund will no doubt have been encouraged by both the panic that ensued in the Bayern ranks following Martin Hinteregger quick-fire double, and the vacant marking that allowed the big Frankfurt centre-back to pull his side back from 3-0 down, they will also have taken note of their rivals' attacking potency.

Even before Leon Goretska arrived late in the box to steer home Thomas Muller's perfect cut-back in the 17th minute, finishing off a superb, sweeping Bayern attack, the hosts should have been well clear, with Robert Lewandowski, Ivan Perisic, and Benjamin Pavard all going close.

✅ It looked all over when this happened.

🤯 But 10 minutes later and it's 3-2 with Bayern scrambling!pic.twitter.com/slmywKz9kP

When Muller and Lewandowski struck aside of the break, the former skilfully controlling a difficult cross before firing in, and the latter stooping low to head home less than 60 seconds after the restart, the game looked dead and buried.

But almost immediately, slack defending at a corner allowed Hinteregger to scruffily force the ball home, and Bayern failed to learn their lesson as he thundered a header past a helpless Manuel Neuer only a few minutes later.

However, the visitors' carelessness in possession had been bearing as much fruit as the hosts' own creativity, and Frankfurt's error-strewn display handed the momentum back to their opponents just as the Bundesliga leaders were wobbling.

Gelson Fernandes intercepted a low ball from Alphonso Davies before playing an inadvertent one-two, which allowed the Canadian the simplest of finishes and made it four goals in 15 second-half minutes

Before long Bayern's three-goal advantage was re-established when a mazy run down the left from substitute Serge Gnabry caused havoc, with his shot eventually being poked into his own net by Hinteregger, completing an undesirable hat-trick.

Kai Havertz bagged a brace for the second time in six days as Bayer Leverkusen leapfrogged Borussia Monchengladbach into third in the Bundesliga with a 3-1 win in front of a stadium full of cardboard cutout fans.

Havertz has been linked with a summer switch to Chelsea and the German forward keeps putting himself in the shop window, following up his double at Werder Bremen on Monday with another two goals.

Borussia-Park was packed with thousands of cardboard cutouts of fans to make up for an otherwise empty stadium, while there were also banners protesting against ghost games.

The 20-year-old provided the finishing touch to a fluid counter-attack to give the visitors a seventh-minute lead, slotting underneath Gladbach goalkeeper Yann Sommer first time after being played through by Karim Bellarabi.

Marcus Thuram equalised with an emphatic strike seven minutes after half-time but parity would not last for long as Havertz scored from the penalty spot just before the hour after Nico Elvedi fouled Bellarabi in the area.

Sven Bender made sure of the win for Leverkusen nine minutes from time when he headed home from Kerem Demirbay’s free-kick.

Werder Bremen bounced back from Monday's hammering by Bayer Leverkusen as they picked up a surprise win away at European hopefuls Freiburg.

Leonardo Bittencourt's strike from outside the area captured the goal of the 14:30 kick-offs accolade, although Davy Klaasen's wonderful long pass assist created the opportunity.

For the second time since the restart, Freiburg saw a late goal ruled out through VAR.

Manuel Gulde looked to have levelled in the closing stages, shortly after Philipp Bargfrede had been sent off for two bookable offences, but the effort was chalked off for offside.

Second-bottom Bremen therefore moved to within two points of safety.

Paderborn secured their second point in as many weeks as the bottom club held Hoffenheim to a 1-1 draw.

Hoffenheim forward Robert Skov gave the visitors the lead after just four minutes, but Dennis Srbeny capitalised on some slack defending five minutes later as he curled an effort into the top corner from distance.