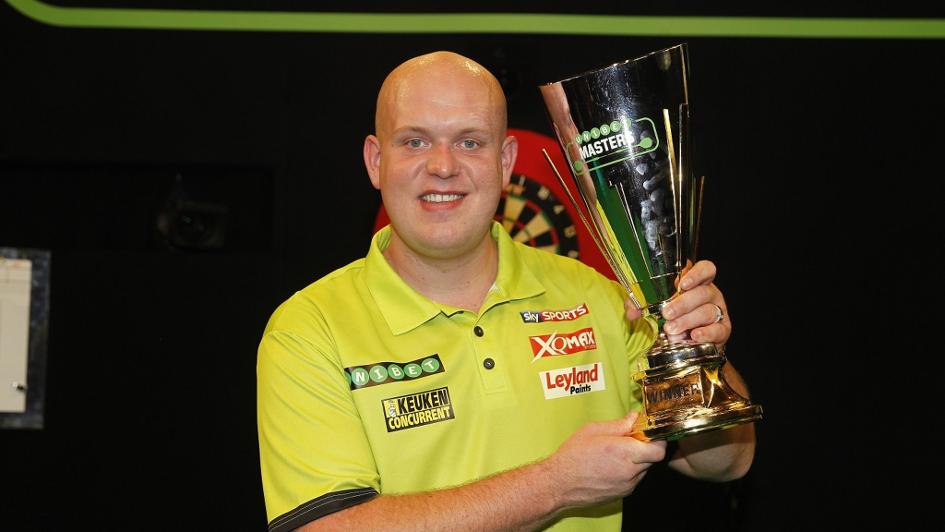 Masters 2017: Van Gerwen wins for third year in a row

Michael van Gerwen continued his ruthless dominance in darts as he claiming a third successive Masters title by defeating Gary Anderson 11-7 in a high-quality repeat of their 2017 PDC World Championship final.

The world number one, who followed up his 25 tournaments titles in 2016 with a 7-3 victory over the Scotsman at Alexandra Palace earlier this month, once again came out on top with a sizzling display in Milton Keynes to get the new season under way in style.

Van Gerwen averaged a staggering 109.42, hit seven 180s and nailed three ton plus checkouts, including a 121 to seal the title, in a clinical display of finishing as he made it six consecutive tournament wins.

Anderson pushed him hard with a highly-impressive average of 103.58 although his 13 missed darts at doubles, especially in the 17th leg when he had the chance to cut MVG's lead to 9-8, proved costly.

Victory in the 20th final he's reached in the last 22 tournaments he's played extends his winning streak in all events to 32 matches dating back to his defeat to Daryl Gurney at the German Darts Championship in October.

Van Gerwen has now won the last four meetings between the pair and they will clash again on the opening night of the Premier League this Thursday in Newcastle.

"I feel great, it means a lot to me and every title is special," said van Gerwen. "I love winning and I love what I do but it's worth it.

"I had to perform this well because you know what Gary can do - if you give him a finger he takes a whole hand. Every time I thought I had him he came back and he always fights to the end.

"Gary is a fantastic player and we always have great games. You have to throw 105-110 averages now to win and I've done that.

"It's been a phenomenal weekend for me and everyone played well, it's been a fantastic tournament. All the pressure is still on me and I want to prove that I can do it tournament after tournament, so I'm glad I've won again."

Anderson, who was playing in his first Masters final having earlier beaten Raymond van Barneveld and Phil Taylor, said: "Michael's been brilliant. "It's going to come to an end one day but I'm still playing darts and banging heads with the best in the world, so overall I'm happy.

"Michael was 9-7 up and I should have had the leg to go 9-8, and if it goes to nine-all then anything could happen, but I made a mess of it and Michael does what he does and finished the match.

"I'm not far away, it's my mistakes that are giving him the shot so I need to sort them out."

Having been below his best in his 11-5 semi-final win over Adrian Lewis earlier in the evening, MVG blasted out of the blocks around 30 minutes later with a 107 checkout in the opening leg before a 12-dart leg moved him 2-0 up.

Anderson pulled one back only for the 27-year-old to fire three 11-darters in the next six legs to open up a 6-3 advantage.

The Flying Scotsman hit his second 100 plus checkout of the match with a 106 to stay in touch but van Gerwen responded by taking two more legs in a row, including a 130 checkout to break, as he moved three away from victory.

Anderson, 46, broke back immediately in a stirring run of winning three of the next four legs but at 9-7 down he missed three crucial darts at a double to pile the pressure on MVG.

And van Gerwen made him pay by taking out 80 before a stylish 121 checkout sealed his triumph at Arena MK and a first prize of £60,000.

Michael van Gerwen will play Gary Anderson in a repeat of their 2017 PDC World Championship final when they battle it out for the Unibet Masters title in Milton Keynes tonight.

The world number one, who denied the Scotsman a third straight crown with a 7-3 victory at Alexandra Palace at the start of January following a season which saw him win 25 tournaments in 2016, brushed aside Adrian Lewis 11-5 in the last four despite being well below his best while Anderson produced a late rally to beat Phil Taylor 11-9 in a thriller.

Van Gerwen averaged 101.69 - which was someway short of the 107.75 he managed in his 10-4 thumping of Mensur Suljovic earlier in the day - but he was always in firm control of the match as former two-time world champion Lewis struggled to get going.

The defending Masters champion, who is chasing his third successive crown here, could have won by a much wider margin having opened up a 7-2 lead but he lost three legs on the bounce, including the 10th when he missed five darts at a double.

Van Gerwen quickly responded in style by following up an 11-darter with a 12-darter and took the next in 15 darts to move one away from a sixth successive tournament final.

The Dutchman then gave himself a chance of a nine-darter after visits of 180 and 177 but despite only managing 44 with his next three darts, he then completed the job by taking out 100 with a single 20 and two double tops.

Victory means MVG has now won 31 matches in a row dating back to his defeat to Daryl Gurney at the German Darts Championship in October while he's now reached the final in 20 of the last 22 tournaments he has played.

A little earlier, Anderson reeled off four legs in a row to defeat Taylor and reach his first Masters final.

The two-time world champion trailed 9-7 in a compelling last-four showdown but a combination of clinical finishing and costly misses from the Power late on saw him book his final spot.

Anderson's average of 102.12 was also well short of the 109.74 and 106.5 he managed in the opening two rounds but his impressive checkout percentage of 61.11% proved decisive as Taylor struggled to find his best form.

Taylor, playing in his final Masters before his planned retirement at the end of the 2017 season, initially found himself 3-1 behind after a slow start from both players although a superb 131 checkout on his throw saw him cut the deficit just before the first mini interval - albeit still a break down.

Anderson responded with a fine finish from 110 as he retained the initiative but after the next two legs were shared, the Power broke with a 14-darter to restore parity at 5-5.

The Flying Scotsman was on a nine-darter in the next after following up a 174 with his fourth 180 of the match but after a 131 on his next visit left him 16, he then missed three successive darts at a double as Taylor made him pay by taking out 40.

The 2013 Masters champion then opened up a two-leg lead for the first time in style by taking out 152 but his joy was to prove short-lived as Anderson broke back in the next before checkout out from 126 with a bullseye finish to level the match at 7-7.

Taylor held his nerve from 79 to hold throw as he moved 8-7 up before the final interval and then broke Anderson with a clinical finish from 65 to edge closer to his first televised final since winning the inaugural Champions League of Darts back in September.

The 2017 world championship runner-up needed to break back instantly and did so with a fine checkout from 97 but only after Taylor had missed two darts at a double while he took advantage of another costly miss from the Power in the next to level the scores at 9-9.

Anderson then made it three legs in a row with more sublime finishing under pressure when he took out 91 to break the Taylor throw before completing the 11-9 victory with a checkout from 84 as he booked his place in the Masters final for the first time in his career.

The 56-year-old only managed four 180s compared to Anderson's seven and ended the match with a disappointing average - by his standards - of 98.03 although his checkout percentage of 50% would have been much better had he not missed those four crucial darts at doubles late on.

The 16-time world champion, who on Friday announced he would retire from playing at the end of the season, kept alive his hopes of winning a first televised title since last year's inaugural Champions League of Darts with a 10-5 victory over third seed Peter Wright.

Should the Power get past the in-form Anderson, who knocked out Raymond van Barneveld, and then go on to lift the title it would be his first major ranking tournament success since 2014, when he claimed the World Matchplay and the Grand Slam of Darts crowns.

Taylor averaged 100.14 against a below-par Wright, hit four 180s while he also made two 100+ checkouts including a superb 153 in the very first leg of the match.

The 56-year-old's finishing also ensured he kept Snakebite subdued throughout the match as he nailed 10 of his 18 attempts at doubles but he'll need to raise his game further if he's to see off world championship runner-up Anderson.

The Scotsman averaged just shy of 110 in his first-round win over Benito van de Pas on Friday night and he once again produced darts of high quality in a 10-6 victory over van Barneveld, who contributed a 170 checkout as well as finishes from 141 and 121.

Anderson nailed six 180s in another impressive average of 106.5 while a superb checkout of 138 contributed to his clinical finishing percentage of 62.5% as he kept Barney at arm's length after surging into an early 4-1 lead.

Van Gerwen remained firmly on course for yet another televised final as he brushed aside Mensur Suljovic 10-4 in the final game of the afternoon which set him up a last-four showdown with Adrian Lewis.

The world number won, who followed up his 25 tournament titles in 2016 with a second world title at Alexandra Palace at the start of January, was always in control against the eighth seed from Austria and ended up with an average of 107.75.

His finishing was slightly better than in his 10-6 win over Simon Whitlock on Saturday as he hit 10 of his 23 attempts at doubles while he checked out from over 100 just once with a 108.

Suljovic will be delighted with his average of 103.34 but the match would have been closer had he not missed eight of his 12 shots at doubles.

Meanwhile, Lewis won four of the last five legs in his match against Robert Thornton to claim a welcome 10-6 victory which sees him reach his first televised semi-final since last year's World Matchplay.

Like the other three quarter-final winners, Jackpot also averaged over 100 with 104.77 while his checkout percentage of 55.56% will also fill him with confidence ahead of his meeting with van Gerwen.