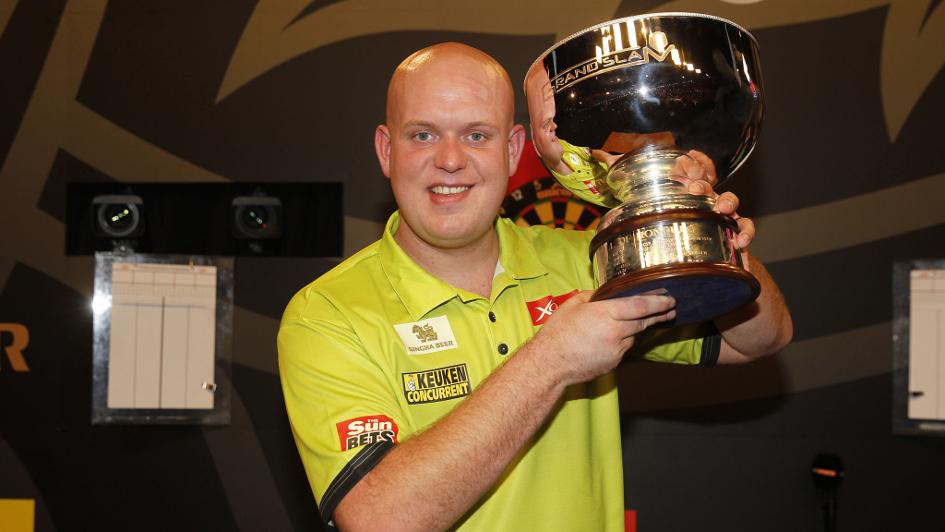 Michael van Gerwen won his 24th tournament of a remarkable season - and a fourth successive televised major - after crushing James Wade 16-8 to defend his SINGA Beer Grand Slam of Darts title in Wolverhampton.

The PDC's world number one was unable to hit the same kind of form as in his scintillating 16-10 semi-final triumph over Peter Wright earlier in the day, in which he averaged over 111, fired 17 maximums and hit two 10-darters, but it was still enough to pocket the £100,000 first prize.

Among van Gerwen's 23 other tournament successes in 2016 have been the six major televised titles at the Masters, UK Open, World Matchplay, World Grand Prix, World Series of Darts Finals and the European Championship while he was also crowned Premier League champion for the second time.

Since finishing runner-up to arch-rival Phil Taylor at the inaugural Champions League of Darts in September, the 27-year-old has now won the last four television titles and he'll be hot favourite to win the next two at the Players Championship Finals next weekend and, more importantly, the World Championship.

An upset at Wolverhampton Civic Hall was potentially on the cards when a fine 112 finish from Wade, who was seeking his first major TV title since the 2014 Masters, earned him the first break of throw of the match to go 3-1 up.

Van Gerwen was sluggish out of the blocks and it took until the fifth leg for him to hit his first 180 of the night before making his opponent pay for two missed darts at double to break straight back.

At this point Mighty Mike's average was a little over 93 but despite not being at his best he was still able to dig out a welcome 104 checkout to restore parity at 3-3 and from then the shape of the game changed entirely.

Another three legs in succession went the way of the defending champion, who beat Phil Taylor 16-13 in the 2015 final, before Wade stopped the rot by finishing off 84 on double top to trail 6-4 after van Gerwen missed three darts for a 7-3 lead.

The Machine's last major televised final had been 18-12 defeat to van Gerwen in the 2015 World Matchplay while he was also looking to erase his memories from the 2010 Grand Slam of Darts where he had blown an 8-0 lead to finish runner-up to Scott Waites of the BDO.

And although Wade kept his hopes of causing a real shock on track by taking a second successive leg, his formidable opponent rattled off the next three including checkouts from 94 and 70 to take a firm grip once again at 9-5.

Van Gerwen's level of play continued to rise rapidly, with his average now touching 100, and he then took out a superb 127 on the bull to open up a commanding five-leg gap.

The Dutch ace, who had won all seven of his previous tournament finals against Wade, came back after the third interval to extend his advantage further but his scoring suddenly started to flag and the Englishman responded with three legs on the trot to get the Wolverhampton crowd on their feet.

A fourth 180 of the match put MVG on track for a match-high 136 checkout to move to within four legs of glory and he swiftly followed this up with an 11-darter for yet another break of the Wade throw.

He effortlessly polished off the next three legs to make it five in a row and earn himself yet another trophy to celebrate - although is average of 98.74 and six 180s won't have pleased him.

Van Gerwen, who took home £102,500 in total which includes the mini bonus for previously topping his group in the unique tournament which brought together players from the PDC and BDO, told www.pdc.tv: "This is the best feeling you can have, to win a tournament.

"It was a difficult final and I had to work hard.

"James is a fantastic player and he made it difficult but I'm really glad I won this trophy. I think I proved that I can still win when I'm not 100 percent, but it's not how you win a trophy, just that you win it."

Wade, who was much better in his 16-14 victory over Gary Anderson earlier in the day, averaged just 90.73 but his impressive checkout percentage of 47.06% showed it could have been closer had he scored heavier and earned himself more chances at doubles.

He pocketed £50,000 as runner-up and told www.pdc.tv: "Michael is the best player in the world at the moment and I didn't give him a game. I was very poor in the final."

Defending champion Michael van Gerwen averaged over 111 and hit 17 180s in a stunning 16-10 victory over Peter Wright as he stormed into tonight's SINGA BBeer Grand Slam of Darts final, where he will meet James Wade.

The PDC's number one also managed two 10-darters after twice threatening perfect legs in his 33rd triumphant semi-final this year while he hasn't lost a televised last-four clash since a defeat to Wade in Perth way back in June 2015 - which was also the same month and year he was last beaten by Wright.

This latest victory extends his winning streak over the Scotsman to 16 successive matches and he'll now meet Wade, who came through 16-14 in a war of attrition with Gary Anderson at the Wolverhampton Civic Hall.

Van Gerwen produced high-quality darts over the first 10 legs, averaging just over 106, hitting five 180s and also managed checkouts from 125 and 126 but still found himself on level terms at 5-5 with the impressive Wright.

His opponent headed into the semi-final on the back of a superb run of form in Wolverhampton which saw him beat Phil Taylor in the previous round while he'd also reached the final of the recent World Series of Darts Finals in Glasgow, where he took MVG the distance before losing 11-9, and he was again looking sharp with a ton-plus average of his own backed up by clinical finishing.

However, a rampant MVG stepped up the pace straight after the interval, following up an 11-dart leg with a 13-darter and despite Wright quickly pulling one back, he then nailed a 12-darter to go 8-6 up.

Snakebite responded by coming agonising close to taking out a 170 finish but returned on his next visit to close the gap back to one leg and ensure MVG, who was now averaging over 109 with eight 180s, couldn't get clear.

Wright then broke the Dutchman's throw with a 12-darter of his own, taking out 81 with a bullseye finish to level the scores only for MVG to promptly respond with a 139 checkout for a 12-dart break and he followed that up with a hold to re-establish his two-leg lead.

MVG narrowly failed to take out 108 in the next as Wright reduced the deficit once more but a ruthless 10-darter ensured he went into the next interval 11-9 up in an absorbing contest while his average was now a stunning 112.02 boosted by 13 180s.

Yet another 'routine' 12-darter followed to move two breaks of throw clear at 12-9 and while Wright was still operating at a high level of his own with an average of 104 and seven 180s, he was starting to lose sight of his formidable opponent.

The next two legs went with throw but at 13-10 down, Wright desperately needed a break as MVG looked like powering to the finish line.

And he was then presented with a big chance to do just that only to miss four successive misses at a double allowed MVG to pounce before two successive 180s in the next leg saw him set a new personal best of maximums in one match to 16.

This helped him set up a 10-dart leg which he finished on double one and duly went on to hit another 180 as he completed a 16-10 triumph, ending with an average of 111.17 and a checkout percentage of 47.06%, including three ton-plus efforts.

Van Gerwen, bidding for a 24th title of an astonishing season, told www.pdc.tv: "The most important thing was to win the game, but Peter pushed me to play this well. I tried to do anything that's in my possibility - I messed about at the beginning but after that I played phenomenal.

"I kept scoring really well and I very rarely made a mistake. It gives me great confidence, but that was only the semi-final and I have to show it again in the final."

Wright said: "I couldn't find my throw today and I couldn't find the pitch or the happy medium pace, and it felt totally different to the game against Phil where I was so comfortable.

"If you want to win this tournament you have to be averaging 111 like Michael. I don't think I played well all week either apart from the match against Simon Whitlock.

"The next step for me is to stick with these darts and keep working hard with these darts. Six months down the line they will be like gloves for me and people will have to watch out. I'll pick myself up and get ready for next week now in Minehead and hopefully it will be a different story."

Wade's semi-final triumph was just as enthralling albeit of less quality in terms of high scoring.

The Machine only averaged 91.93 compared with Anderson's 98.36 and also finished with a slightly lower checkout percentage of 43.24% but drew on his classy matchplay skills to stay with the reigning two-time world champion throughout before delivering the knockout blow at the business end of the clash.

In fact, Anderson was never ahead until going 9-8 up with a 126 checkout having earlier been forced to battle back after Wade's quick start which was somewhat halted when the Scot finished from 137 to cut the deficit to 3-2.

The left-hander managed his first ton-plus checkout in the eighth leg with a match high 147 to go 5-3 up but it was two clinical back-to-back finishes from 70 and 82 which were arguably more crucial as he drew level at 10-10 at a moment in the match when he was 10 points behind on the averages behind a fired up Anderson.

Wade, the 2010 Grand Slam finalist, was next ahead when breaking Anderson's throw to go 13-12 up and repeated the trick at 15-14 by taking out 64 to reach his first major televised final since losing to van Gerwen in the 2015 World Matchplay.

The result was also the 33-year-old's first semi-final success of 2016 having previously missed out at the Masters, Champions League of Darts and European Championship.

Wade told www.pdc.tv: "I'm so excited to be in the final and it's great for me. Gary wasn't at his best and I made the most of it.

"It was probably the worst I've scored for the whole tournament, but I finished well. Every time Gary gave me an opportunity I took it.

"It's been a while since I've played half decent darts, but my wife said to me a few weeks ago that I needed to start practising more, that I was losing to people I should lose to and playing like an idiot. I've been practising more and it's made a difference.

Wade hasn't got fond memories of his last Grand Slam final having memorably thrown an 8-0 lead away to lose 16-12 against Scott Waites of the BDO - but tonight's test will be an even greater challenge.

He said: "I believe I'm good enough to beat anyone in the world, and Michael will be conscious of me going into the final. I'll respect Michael, he's the best player in the world, but I won't worry about who I'm playing."