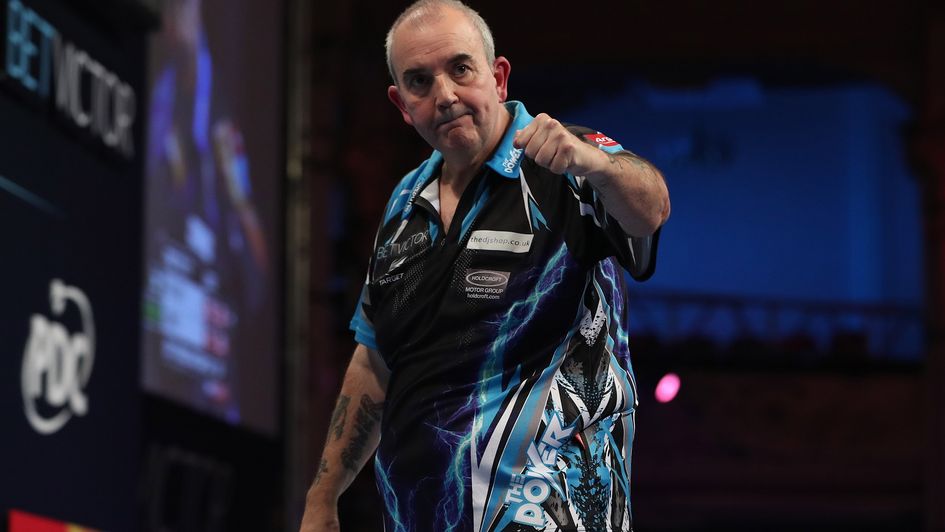 Phil Taylor is the odds-on favourite to win a 16th World Matchplay title on his Blackpool farewell after he saw off Adrian Lewis 17-9 to set up a final with Peter Wright.

The Power, who is retiring at the end of the season, started the tournament as a 20/1 outsider due a tough draw which put him on a collision course with his Dutch foes Raymond van Barneveld and Michael van Gerwen.

But having thrashed them both 11-3 and 16-6 respectively, the 56-year-old found himself at the head of the betting at 5/4 prior to his meeting with Jackpot, who initially pushed him hard in a repeat of the classic 2013 final before being blown away by another vintage display.

Taylor, who has won 54 legs during the tournament so far and lost just 23, is 8/15 with Sky Bet to see off Wright on Sunday night (live on Sky Sports from 1900 BST) while Snakebite can be backed at 6/4.

The Power trailed 3-1 early on as Lewis threatened to play the role of the party pooper but after winning three successive legs from 7-7 to move 10-7 up, he never looked back.

The 15-time champion averaged 102.74 and hit eight 180s while his checkout percentage of 34.69% would have been higher had it not been some early troubles on the doubles.

Lewis, playing his first tournament since back surgery saved his career earlier this month, looked in some discomfort as the match drifted well away from him but only his very best would have been enough to stop Taylor.

It will the legend’s 17th final on the Winter Gardens stage having only finished runner-up once when MVG defeated him 18-10 in the climax of last year’s tournament.

He told the PDC website:  "I did well and I thought it was a good game, and it was tough for both of us.  I haven't played like that for a long time to be honest and it's my last day at the Winter Gardens tomorrow so I'm going out with a bang.

"Adrian pushed me but I think he felt it towards the latter end of the game. My mindset was to keep him under pressure and I knew he was shattered, so I had to take advantage of him.

"I'm going to be steady, I'm going to be consistent and I'm going to hit Peter with a lot of big shots and put him under pressure. I don't think Peter's played as well as he can so far this week but he's done brilliantly to get to the final - he was lucky to get through the first round but he's pushed on.

"I genuinely like him, I like how he works, he does everything right and he practises hard, and he works so hard on his appearance. He's probably the hardest working player I've ever seen in my career."

Taylor showed no signs of early nerves when taking out 86 in two darts to take the opening leg but Lewis won the next three to silence a large proportion of the crowd.

It could have been 4-1 but the 32-year-old missed a shot at double five and that would prove costly as Taylor took out 64 before winning the next two legs to go ahead.

Lewis halted the Power’s surge with a hold and then checked out from 72 after Taylor missed two darts at a double to regain the initiative although that would be the last time he led.

Taylor won back-to-back legs to get his nose in front but at 7-7 he found the same kind of relentless high scoring and clinical combination finishing which helped him destroy MVG.

He won 10 of the next 12 legs to storm into what is sure to be an emotional final on Sunday – providing he gets the result he desperately wants as he targets at least one major title before his retirement.

Wright reached his first World Matchplay final but was pushed hard by Daryl Gurney during his nervy 17-15 victory.

Both players struggled badly on their finishing during a tensioned-filled clash, with Wright missing 41 of his 58 attempts at doubles and Gurney spurning 34 of his 49.

Snakebite's below-par average of 93.92 was also a shade lower than his opponent's 94.4 and he'll know a much-improved display is needed on Sunday night against Taylor if he's to lift his second major trophy of the season.

The consistent high-scoring and solid finishing that helped Gurney defeat Gary Anderson and Mensur Suljovic in the previous two rounds largely deserted the Northern Irishman on this occasion but he can take credit from the way he battled back from 11-6 down to make a real fight of it - as well as his tournament as a whole.

Snakebite, who also beat Gurney in the UK Open semi-finals en route to his maiden TV title back in March, made a slow start and trailed 4-1 at the first interval but the momentum swung firmly in his favour when taking the next seven legs on the trot.

While Wright upped his game during this run with clinical checkouts of 76, 65, 80 and 90, his opponent’s game temporarily fell apart, missing five darts at doubles.

Gurney eventually stopped the rot to close the gap to 8-5 and came agonisingly close to a much-needed break in the next when just missing the bull to complete a 161 checkout. Instead, Wright returned to take out 108.

The Northern Irishman then held throw as he seemed to be regaining his lost confidence but subsequently spurned seven darts to break in a woeful leg of finishing, with Wright finally hitting double one with his 10th attempt at a double.

He needed another eight to break Gurney in the next leg to open up a commanding 11-6 lead as his opponent missed all three of his shots at tops when it looked like he’d been gifted an opportunity to get his foot back in the door.

The unseeded 31-year-old then rallied out of nowhere to win four successive legs to capitalise on a slump from Wright although the next two went with throw as the Scotsman edged 12-11 ahead.

As tension continued to mount Wright held his next throw before landing a crucial break on double tops to move just three legs away from a place in his first Matchplay final.

That should have been reduced to two in the next leg when returning to the oche with 32 left on the board but he failed to finish and Gurney took full advantage with a 118 checkout to stay in touch at 14-12 down.

Wright responded with a finish from 100 to break back but a nervy miss at double 16 in the following leg allowed Gurney to win the leg and he followed this up with another pressurised hold - after Snakebite missed double 19 - to move within one at 15-14.

The 47-year-old took out 71 in two darts as he edged to the brink of victory but Gurney wasn't about to lie down as he then held throw to take the match to a 33rd leg.

This nervy semi-final would have gone to extra legs had Gurney nailed the bullseye after hitting 19 and treble 18 for an attempted 98 checkout but Wright kept his cool with a two-dart finish from 96 (treble 20, double 18) to complete his victory.

The third seed told the PDC website: "I'm over the moon to have reached the final of the World Matchplay - it feels fantastic. I'm one step away now and hopefully I can play better than that and lift the trophy tomorrow.

"It was a battle for both of us. Daryl is a fighter and an awesome dart player - he's been playing some fantastic darts - but I'm a very similar person.

"I couldn't hit anything and I changed my darts a couple of times. I wasn't on top form but I scraped over the line and I'll take that. I haven't played well all week and maybe I'm waiting for the final.

"I've done the hard job to get to the final and now I can relax."

* Each game must be won by two clear legs, with up to a maximum of five additional legs being played before the sixth additional leg is sudden-death