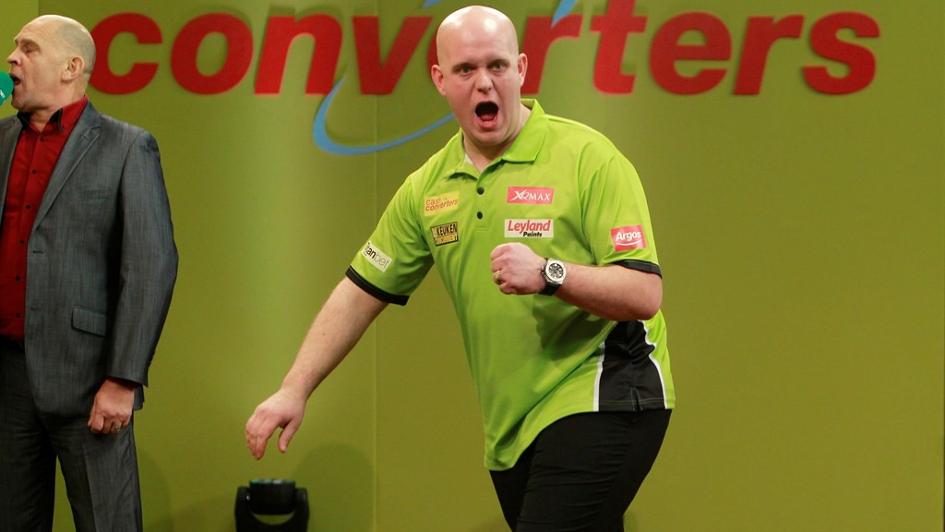 The defending champion was out of sorts during his semi-final triumph over Darren Webster earlier in the evening at the Butlins Minehead Resort when he had to come from 6-0 down to win 11-8 but he was back to somewhere near his best against Chisnall as he lifted this trophy for the third time in four years.

Van Gerwen averaged over 108 and was ruthless on his finishing with a checkout percentage of 52.38% to give Chisnall, who was seeking his maiden TV title, little chance of ever getting into the match.

Among van Gerwen's 24 other tournament successes this year have been the seven majors at the Masters, UK Open, World Matchplay, World Grand Prix, World Series of Darts Finals, European Championship and last weekend's Grand Slam of Darts while he was also crowned Premier League champion for the second time.

The only major he's failed in since his World Championship heartache at the start of 2016 was at the inaugural Champions League of Darts, where Phil Taylor comfortably beat him twice in one day, and he'll now head to the Alexandra Palace next month in confident mood.

He's odds-on favourite at 4/6 with Sky Bet to be crowned world champion for the second time in his career in January while defending champion Gary Anderson and 16-time champ Taylor are next in the running at 13/2 and 8/1 respectively.

Mighty Mike got off to a good start in his latest final as two 13-darters helped him move into a 3-1 lead but after cutting the deficit by taking the next, Chisnall missed two darts to level the scores and that proved to be a decisive blow.

Then from 4-2 up, MVG won the next four legs, hitting a 180 in each of them and almost managed back-to-back 10-darters in an explosive run which took the game away from Chizzy.

Although Chisnall did pull one back, van Gerwen quickly polished off the next three with further finishes of 13, 14 and 11 darts to complete yet another emphatic victory.

Van Gerwen told www.pdc.tv: "It's an amazing feeling for me and I'm a happy man. It wasn't easy for me today and I had to work really hard, but I'm really glad that I won this trophy again.

"Darren gave me a scare and Dave had a chance to make it three-all, and Dave's a dangerous player but I punished him when he let me in.

"Going into the World Championship this is a big confidence boost for me. What I've done this year is phenomenal and I'm really proud of myself because nobody has won as many tournaments as this before."

Chisnall pocketed the runners-up prize of £35,000 having defeated Robbie Green and Peter Wright earlier on Sunday and said: "I'm trying and I played quite well all week, but Michael did the business against me.

"I've had a good weekend and it's another step forward for me to reach the final but I'm determined to one day get that win."

Michael van Gerwen came from 6-0 down to book his place in the final of the Cash Converters Players Championship Finals with an 11-8 victory over Darren Webster at the Butlins Minehead Resort on Saturday night.

The world number one will now attempt to win an astonishing 25th tournament title of the season in Sunday night's final against Dave Chisnall, who held off a late fightback from Peter Wright to triumph 11-8.

Webster was appearing in his first televised semi-final but the huge underdog took full advantage of van Gerwen's slow start with some clinical finishing to race into an unthinkable 6-0 lead.

The full-time builder had claimed a famous 5-0 victory over 16-time world champion Phil Taylor in the group stages of the recent Grand Slam of Darts and must have sensed an even greater achievement was on the cards in front of a stunned yet excited 5,000 strong crowd.

But the defending champion had other ideas as he quickly picked up his scoring power as he roared back to level the scores at 6-6, firing eight 180s along the way.

Webster then edged ahead twice more at 7-6 and 8-7 and so nearly took out a 160 which would have taken him two legs away from final - but a miss on the double 20 after two treble 20s allowed MVG to restore parity once again.

The Dutchman had missed 20 attempts at a double in the semi-final but only needed one dart on tops as he took out 68 to break throw and move ahead for the first time.

Van Gerwen then missed a further eight darts at a double in the next leg before finishing on double one at which point he mistakenly thought he had won the match - before promptly apologising.

MVG, who averaged 94.59, then completed his comeback in style as he checked out from 144 to wrap up his 34rd triumphant semi-final this year.

Webster meanwhile will go back to his job as a builder £20,000 richer after his performances in Minehead which saw him beat Jonny Clayton, Simon Whitlock, Alan Norris and Christian Kist.

"You have to destroy people. I should have buried him, but he isn't world number one for nothing and he came back at me. Maybe it was inexperience and my mind wandered, but I still thought I was going to have him at the end and I didn't stop fighting.

"I've enjoyed this weekend. Everyone thought Michael was going to annihilate me but I've got confidence now and a bit more stage experience and I'll look forward to the World Championship."

Chisnall had to hold his nerve to book his place in the final of this tournament for the first time in his career after seeing Wright cut an 8-2 deficit down to 10-8.

But Chizzy, who averaged 100.58 and hit nine 180s, got the job done on double eight to keep alive his chances of winning a maiden TV title.

Wright was also seeking the first major TV crown of his career and afterwards he said: "In a way I'm happy to be in the semi-final but then again I'm not because I didn't give Chizzy the game that I should do.

"I missed a few doubles early on but it will be a different story in the World Championship."

The world number one was in imperious form as he averaged 108 in a 10-5 victory at the Butlins Resort which also included a brilliant 145 finish.

Van Gerwen's 11-darter in the opening leg set the tone and he swiftly moved 3-0 up with the help of three 180s along the way before Barney finally got on the board in style with a 161 checkout.

The defending champion saw his lead cut to 3-2 before he rattled off four successive legs which culminated in his 145 finish while he managed his second ton+ checkout from 111 to round off the victory.

He now meets Darren Webster, who won through to his first TV semi-final with a 10-6 defeat of Christian Kist.

The Norwich ace had won through to his first big quarter-final for almost a decade - since his previous run to the last eight at the 2007 World Championship - by defeating Jonny Clayton, Simon Whitlock and Alan Norris.

He added former Lakeside champion Kist as his fourth victim of the weekend, settling any nerves with finishes of 114, 81 and 88 to move 3-1 up and also taking out 72 and 74 in moving into an 8-3 advantage.

Kist sparked a revival with a 120 checkout and also added double 12 and double five to cut the gap to 8-6, but he paid for missing his chance to reduce the arrears to one leg as Webster landed double ten before taking out 120 himself to seal the win.

Peter Wright survived a huge scare by coming through a last-leg decider to beat Kim Huybrechts 10-9 in a thrilling clash.

Snakebite looked to have control of the match when leading 6-3 and although his Belgian opponent roared back to restore parity at 6-6, he took the next to edge ahead once more.

Huybrechts then hit two 180s in an 11-darter to level, landed a 12-darter to lead for the first time and then take out a stunning 140 checkout for another 12-dart finish to move into a 9-7 cushion.

Wright took the next to stay in the game, and when Huybrechts missed double ten to finish 128 for the match in the next the world number three forced a decider with an 11-darter.

Wright, with the advantage of throw, was first to a finish as he wired double 16 to take out 103, but Huybrechts was unable to take out 164 to allow his rival back in to finally claim victory on double eight.

He will next meet Dave Chisnall, who reached the semi-finals of this event for the first time by defeating Robbie Green 10-5 as the world number nine continued his push to claim his first TV title.

Although Green opened with a 117 finish, Chisnall took the next five legs, including two breaks of throw, to move into a commanding 5-1 lead.

Green hit back to 5-3 before Chisnall took out double 18 and double two to regain a four-leg cushion, and bettered his rival's 74 finish by taking out 68 for an 8-4 advantage.

Green landed a 171 as he hit back to win a fifth leg, but Chisnall responded with a maximum to move 9-5 up before sealing the win on double five.