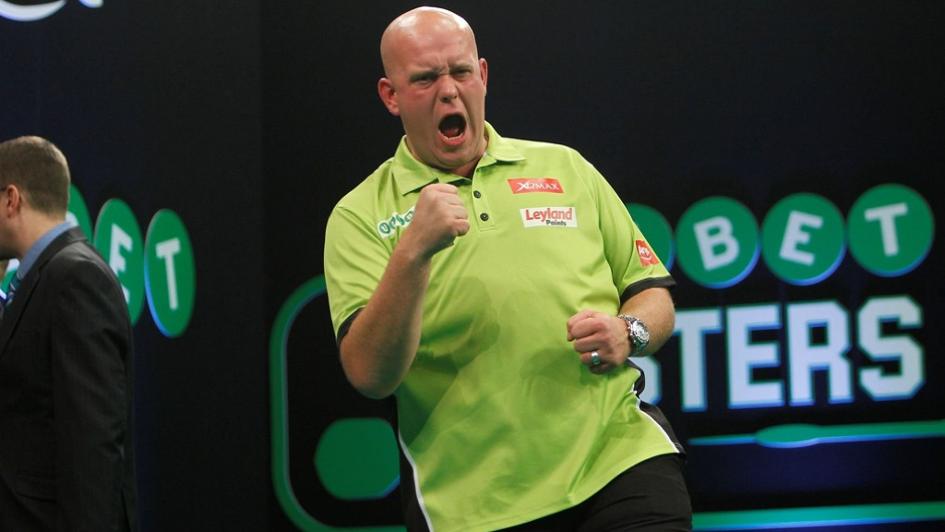 Michael van Gerwen edged out Phil Taylor in a thriller before beating Dave Chisnall 11-6 to retain his Masters title in Milton Keynes.

The Dutchman had survived an enthralling semi-final with Taylor, who missed seven darts at a double to win before losing 11-10, but there were few scares during a routine victory over Chisnall at ArenaMK.

He took the opening five legs without giving Chisnall a dart at a double, hitting four 180s in the process, and went on to finish 110 as he led 7-1.

Chisnall - who had hit back from 8-0 down to win his first round tie with Robert Thornton before also defeating Vincent van der Voort and James Wade - took three of the next four legs to threaten another comeback as he cut the gap to 8-4.

The next four were shared as Chisnall matched his rival's tally of six 180s, but the world number ten was unable to claim another break of throw as van Gerwen held on to hit double five for the title.

Van Gerwen, who averaged 104 for the tournament, said: "I'm really happy to win this trophy. I really had to work for this and it was a hard day.

"I had a bit of luck but you can't ask for anything more than to be holding the trophy at the end. Phil missed seven match darts, which he normally never does, and when someone gives you a chance like that you have to take it.

"At 5-0 in the final I knew the game was over. I had a couple of good finishes afterwards, held my own throw and it was enough to win the game.

"It was a tough day and I feel fantastic. It means a lot to me and I'm really glad to win this Unibet Masters again.

"I started last year exactly the same and we start the Premier League this Thursday, so that's my aim now. I'll enjoy this win and get myself ready to play James Wade in Leeds."

Chisnall was appearing in the fourth televised final of his career, having hit a thrilling 12 maximums in his 11-6 semi-final win over James Wade, but the St Helens ace was left to take home the £25,000 runner-up prize.

"After being 8-0 down in the first round I didn't expect to get through that, so it's a great weekend to reach the final," said Chisnall. "I'm not happy with how I played in the final but there were a few tired darts.

"I beat Michael in the World Grand Prix a couple of years ago and he's punished me for it ever since! You can't give him a head start like I did but he was too good there and he showed why he's the world number one.

"I'm playing really well but it wasn't meant to be and I'll try again in the next tournament."

Phil Taylor missed seven darts at a double to win as Michael van Gerwen bounced back to beat him 11-10 in their Masters semi-final.

Taylor landed a 174 score before double 16 put him 10-9 up, only to then miss seven match darts in leg 20 as van Gerwen scrambled in double 16 to send the match into a decider.

The world number one scored 140, 140 and 134 to leave 87, and when Taylor was unable to take out 122 the Dutchman stepped in to finish the combination on double 12 to seal his great escape.

Dave Chisnall powered into the fourth televised final of his career by landing 12 180s in a superb 11-6 defeat of James Wade.

Five of those maximums came in the opening five legs as Chisnall also landed a 174 score in opening up an early 4-1 lead, before Wade finished legs of 14, 12 and 12 darts - hitting five maximums of his own in a three-leg burst to level.

Wade also landed a 180 and a 138 checkout to level in the tenth leg, but Chisnall found another gear to take the next five legs without reply and move 10-5 up, hitting another three 180s and claiming two breaks of throw.

Wade took out double eight to keep his hopes alive but it would prove a brief rally as Chisnall took out 117 to seal his spot in the final.

Michael van Gerwen was again in ruthless form as he thrashed Michael Smith 10-3 to set up a Masters semi-final with Phil Taylor.

Defending champion Van Gerwen, who is bidding to bounce back from his disappointment at the World Championship, disposed of Stephen Bunting 10-1 in Saturday's first round and produced more of the same magic in Sunday's quarter-finals with a 105.86 average.

Smith actually missed doubles to win two of the first three legs, and shared four 180s in the other as an 11-darter helped van Gerwen into a 3-0 advantage.

He then produced back-to-back 124 checkouts to move five legs clear, took out double eight and then punished seven misses from Smith to lead 7-0.

The eighth also went to van Gerwen before Smith rallied, hitting double five to get off the mark and two of the next three to pull back to 9-3, but a stunning 142 checkout - as van Gerwen hit two treble 17s and tops - sealed the reigning champion's semi-final spot.

He will now meet Phil Taylor, who came through a thrilling battle with Peter Wright to win 10-9.

In a game where the lead changed hands three times, Wright led 2-0 before Taylor took the next two to level despite 180s from his rival, before landing a maximum in the fifth to move ahead.

Wright finished 65 to level, but Taylor finished 84, broke throw and then finished 71 for a 6-3 lead - only to see the world number five take out 161 and 115 in successive legs before firing in double 18 to level.

The pair shared the next four legs to remain locked at eight-all, before Wright took out a brilliant 124 to break and moved 9-8 up.

The pair traded maximums before Taylor added a second 180, with Wright firing in a 174 to leave 16 after nine darts only to watch on as his rival finished 41 for an 11-darter to snatch victory from the jaws of defeat.

Chisnall had come from 8-0 down to win his first round tie with Robert Thornton 10-9, but was in top form as he overcame van der Voort with a 104.40 average as the Dutchman was unable to follow up his defeat of World Champion Gary Anderson with another big scalp.

Chisnall, though, turned the match with a five-leg burst as he twice broke throw, landed three more 180s and key finishes of 72 and 64 - as well as twice punishing missed doubles from his opponent - as he surged into a 7-3 advantage.

The pair traded 180s as van der Voort hit back in led 11, but Chisnall won the next two before sealing victory with the aid of his eighth 180 and an 84 bullseye finish.

Wade opened with a 104 checkout and took the next two legs to assume command before Huybrechts took out 89 in winning two of the next three to pull back to 4-2.

Wade, though, proved more clinical with a trio of tops finishes as won four of the next five to continue his charge into an 8-3 lead, and though Huybrechts landed his only 180 in a brief rally to win two of three, a fourth maximum helped the left-hander set up 70 to complete the win.