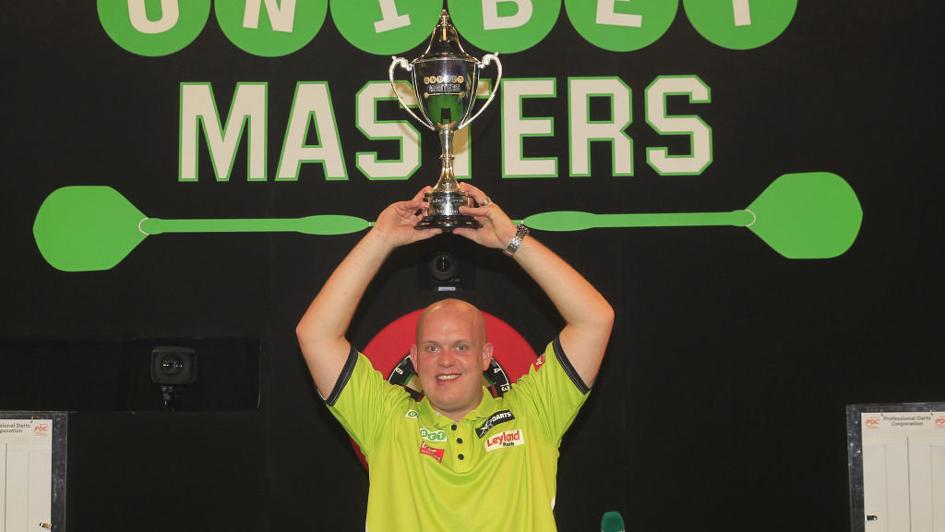 Michael van Gerwen has won the Masters title with a victory over Raymond van Barneveld in the final.

Michael van Gerwen picked up the 2015 Unibet Masters title with a thrilling 11-6 win over Raymond van Barneveld in their all-Dutch final at ArenaMK in Milton Keynes on Sunday night.

World number one van Gerwen made a sensational start to the year by scooping the £60,000 first prize in the third staging of The Masters, succeeding James Wade as champion.

Following a first round defeat of Wes Newton on Saturday night, van Gerwen defied 13 180s from Dave Chisnall by averaging 110 in a brilliant quarter-final win on Sunday afternoon.

The 25-year-old then overcame Adrian Lewis 11-6 in their semi-final - missing double 12 for a nine-dart finish - before producing his best performance of the weekend in the decider against his compatriot.

Van Barneveld had held a lender 3-2 lead before a 157 finish from van Gerwen levelled in leg six and sparked his challenge to life.

Although Premier League champion van Barneveld edged 4-3 up on double ten, van Gerwen took the next five legs in an unstoppable burst, finishing 161 and hitting two 180s and a 177 as he moved 8-4 up.

Van Barneveld defied further maximums from his rival to hit back by winning two of the next three legs - as van Gerwen set up a possible nine-darter in the other with back-to-back 180s and a 110 finish.

The 16th leg then saw van Gerwen miss double 12 for a nine-darter for the second time on the night, with the two 180s also seeing him break the tournament record for maximums in a match which Chisnall had set earlier in the day.

Despite missing out on a perfect leg, van Gerwen completed a master-class of darts with double 18 in the next to seal his eighth major televised PDC title, ending with a brilliant 112.49 average.

"I'm really proud of this trophy and really happy with myself for winning this tournament," said van Gerwen.

"My averages have been brilliant and I did well today, and when I needed to I managed to lift my game - the only thing missing was a nine-darter!

"This has been an amazing tournament - it's the first time we've played in Milton Keynes and the fans were great. This tournament is growing and I'm delighted to have won it for the first time."

Van Gerwen had enjoyed a fortnight's break in the Maldives since the World Championship, but is hoping to take his weekend's form into the Betway Premier League, which kicks off in Leeds on Thursday.

"I had a great holiday in the Maldives but to kick off the year by winning the Unibet Masters is great - it couldn't be a better start for me," he added.

"I hope I can carry this on now into the Premier League, but first I want to enjoy this title."

Van Barneveld had secured his spot in the final with a fine 11-6 win over new World Champion Gary Anderson in the semi-finals, hitting a brace of 120 finishes and leading throughout as he progressed.

However, van Gerwen would avenge his loss to van Barneveld in the 2014 Premier League final as he denied his compatriot another major title, although the five-time World Champion takes home £25,000 as runner-up.

Anderson and Lewis were left to settle with £17,500 prize money as the losing semi-finalists, having also produced some brilliant darts ahead of the Premier League opener next Thursday.