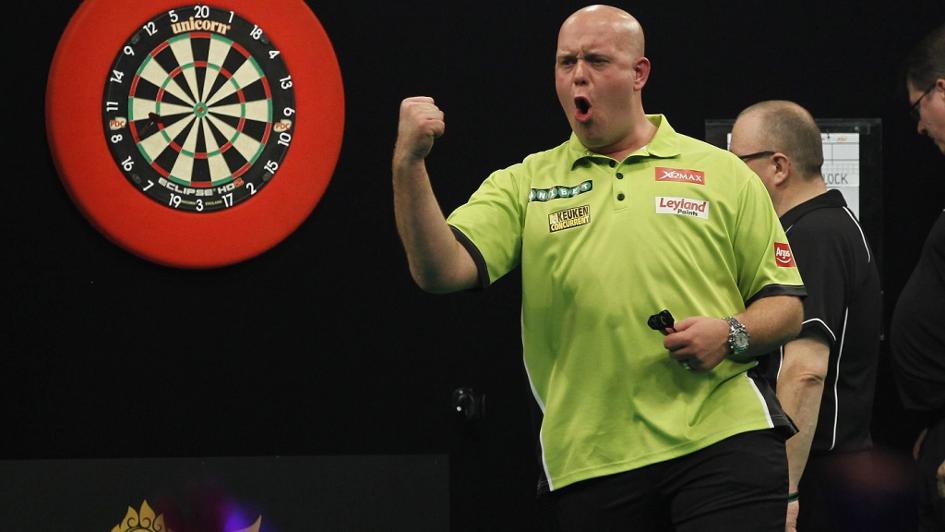 The world number one, who had earlier beaten James Wade 11-7 in a more competitive semi-final, averaged 111.62 - a record in a televised ranking final - and hit 11 doubles out of 16 attempts in a ruthless display of heavy scoring and finishing that gave his Austrian opponent little chance at the Ethias Arena.

Victory made it 22 tournament triumphs for van Gerwen in a quite sensational 2016 and he'll now be setting his sights on success in the four remaining majors of the season - the World Series of Darts Finals, the Grand Slam of Darts, the Players Championship Finals and, of course, the World Championship.

Suljovic was appearing in his first major televised PDC final having earlier stunned four-time European champion Phil Taylor 10-3 in the quarter-finals before holding off a fightback from Peter Wright to win 11-8, but he simply couldn't compete with the Dutchman.

Van Gerwen averaged over 100 in every game across the weekend although he had to avoid a scare on Friday night to get past Simon Whitlock, who had a dart to beat him in the first round.

Had Suljovic pulled off a shock victory it would have been the first time a player from outside Great Britain or Holland to win a major PDC event. Instead he collects a cheque of £40,000 and moves up to seventh in the world rankings.

Van Gerwen, who has also won major titles at the UK Open, World Matchplay and World Grand Prix this year, opened the final with a 174 score and claimed the opening two legs before double nine gave Suljovic a leg, but that would be the only time he finished.

The Dutchman broke his opponent's throw with 12-darters on two occasions, including two 180s in one leg and a 110 finish to follow a 174 score in another, before also taking out 157 as he moved 7-1 up.

After finishing 72, he punished two missed doubles from Suljovic to move 9-1 up before posting double 16 and double nine to complete the rout and win the £100,000 first prize.

"It's a brilliant win for me," van Gerwen told www.pdc.tv. "My finishing was fantastic, my scoring power was there and I did everything that I had to at the right moments.

"Mensur is the most underestimated player in the PDC, I think, and he's a top class player. This was his first final but he is someone we have to look out for.

"I'm really glad that I've won this trophy for the third time in a row, it's absolutely amazing. It's a long day and you have three games, and you can't afford any mistakes. I knew earlier on that I had more in the tank and I'm glad that I produced it in the final.

"It was incredible. I played absolutely phenomenally in the final - everything I wanted went in and I'm absolutely over the moon. I'm feeling great about this performance.

"It's special because I've won this tournament three times in a row. I only live an hour away from here and I feel absolutely great."

Van Gerwen wasn't at his best but still managed to average 102.98 in a hard-fought victory and he'll now face Phil Taylor's conqueror Mensur Suljovic in tonight's final after the Austrian survived a fightback from Peter Wright to edge his last-four showdown 11-8.

The world number won has now won his last 15 major televised semi-finals and will be hot favourite to win his 22nd tournament of the season.

Van Gerwen came from a leg down to move 3-1 up, taking out 135 on the bull for a key finish in leg four, only to see the left-hander hit back with three successive legs of his own to edge 4-3 up.

Finishes of 75 and 120 saw van Gerwen stay in touch at 4-4 and 5-5 before Wade took out a superb 119 checkout to regain the lead in the 11th leg as he threatened to shock the Dutchman.

Suljovic, who shocked Taylor in Sunday's quarter-finals, will be contesting his first major final tonight after getting the better of Wright, finishing the match with a superb 118 checkout.

The Scotsman only led once when taking the opening leg but at 3-3 Suljovic took four successive legs, including key finishes of 86, 96 and 66, to move him 7-3 up.

Wright hit back to win five of the next seven legs as he closed the gap to 9-8, but the Austrian produced a 93 bull finish to deny the Scot a chance to level before sealing a memorable win in style with a brilliant 118 finish on double 19.

Phil Taylor crashed out of the European Championship in Belgium as Mensur Suljovic produced a stunning display to claim a 10-3 victory in the quarter-finals.

The Power, who was aiming to win this major for a fifth time but first since 2011, had never lost to Suljovic but on this occasion was a clear second best at the Ethias Arena in Hasselt.

The Austrian ace averaged 105.50 and finished 10 doubles from 19 attempts in a clinical performance which saw him book a semi-final with Peter Wright, who swept aside Kyle Anderson 10-5 in the final match of the afternoon session.

Despite a Taylor 180 in the first leg, Suljovic landed double eight to lead before tops saw the 16-time world champion level - but he would have only one further dart at a double in the next five legs as the 44-year-old pulled away.

Taylor hit a 180 in a 14-dart finish to hit back, but Suljovic's heavy scoring continued as he finished legs of 13 and 14 darts before another 76 finish moved him into a 9-2 lead.

The four-time European champion responded with a fourth maximum and a 65 checkout, but Suljovic replied with a 180 in leg 13 before sealing victory on tops.

Van Gerwen will now face James Wade in the semi-final as he chases a third successive title in this event.

A heavy-scoring contest saw Klaasen hold the early edge as he took out 75 in the opener and double eight in leg three, with van Gerwen taking the second despite a 180 from his rival, who was punished for three missed doubles.

Klaasen then missed his chance to break in leg four as van Gerwen levelled again, before the world number one produced a 130 finish to move ahead for the first time and then took out 72, double six and tops to move 6-2 up.

Another maximum helped Klaasen respond with a double five in the ninth, but double 12 restored van Gerwen's advantage before he broke again with a key 12-darter to move 8-3 up, with the former Lakeside Champion having hit a 177 as he left 36.

Klaasen, who has now suffered four successive quarter-final defeats in this event, also landed a 168 score in leg 12, only to see van Gerwen hit double 10 to move 9-3 up before tops for the reigning champion completed the win.

Wade had to come through a hard-fought contest with James Wilson to win 10-7.

Former BDO number one Wilson was appearing in his first PDC major quarter-final and started brightly as he took the first two legs, including hitting a 177 and a 96 finish in the second, to lead 2-0.

The pair traded 180s in the third as Wade got off the mark before Wilson landed two maximums to his opponent's one in a high-quality fourth as he moved 3-1 up.

The next two were shared as Wilson moved 4-2 up, but Wade then produced a surge of five successive legs, including key checkouts of 106 and 161 in back-to-back legs - to move ahead 7-4.

Wilson finished double eight, 101 and 72 to level, but Wade landed a maximum as he edged back ahead before taking out 81 and 141 to seal his semi-final spot.

Wright reached the semi-finals for the second year-running with a 10-5 victory over Anderson.

His opponent punished him for a slow start to take the opening two legs on tops, to break, and double 10, before Wright took the next three legs - including a 61 finish as he broke throw - to edge ahead.

He then punished Anderson's miss at double 16 to move 4-2 up and won the next two for a four-leg cushion before the Australian responded on double four in leg nine.

Wright then took out 91 on the bull for a 7-3 lead, with Anderson landing the middle double for a 121 checkout and finishing 92 to stay in touch as the Scot edged towards a victory which he sealed with the aid of a fifth 180.