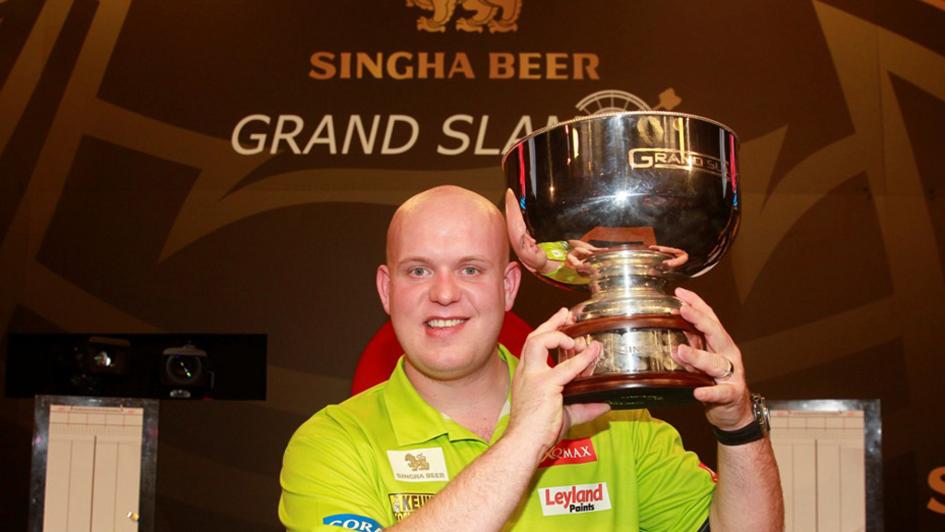 Michael van Gerwen completed a clean sweep of the PDC's major titles with a brilliant 16-13 triumph over Phil Taylor in the SINGHA Beer Grand Slam of Darts final on Sunday night.

Van Gerwen's incredible 2015 continued as the world number one followed up his previous Masters, UK Open, World Matchplay and European Championship victories by scooping the £100,000 first prize at the Wolverhampton Civic Hall.

After trailing 4-1 and 7-3, van Gerwen punished missed doubles from the Stoke legend to win six straight legs and move 9-7 up during an enthralling contest.

Taylor levelled at nine-all, but van Gerwen took the next three to pull into a lead he would never give up as he closed out the win on double 18, hitting 14 180s and maintaining his record of averaging over 100 in all seven wins during the week.

"I had two main targets this year which were the World Matchplay and the Grand Slam of Darts and I've won them both," said van Gerwen. "I'm a very happy man and I'm really pleased because it means a lot to me.

"To beat Phil in the final is a great honour for me and I'm so happy to have won this title. Phil's a fantastic player but he didn't play his best game.

"Phil was playing really good darts at the beginning, and I couldn't find my own speed. It was difficult for me and I wasn't happy, but Phil gave me a finger and I took his hand, and that made me come back in the game.

"When you get in front you don't want to give it away, and I'm really glad that I took my chances.

"I've won every major now and it means a lot to me. I played an absolutely fantastic tournament this week, with good averages, good finishing and the only thing I missed I think was a nine-darter."

Taylor made a perfect start to the game with a 180 on his opening visit, and he also added a 177 as he landed an 11-dart leg to claim the opener before finishing double 16 and 81 to move three legs clear.

Van Gerwen got off the mark in the fourth leg, only for Taylor to take out 131 on double 16 as he restored his cushion, and after the next two were shared the pair traded 11-darts before the Stoke ace finished 106 for a 7-3 lead.

Van Gerwen, though, took out 105 to reply and punished missed doubles from Taylor in four legs out of six as he turned the game around to power into a 9-7 advantage.

A 12-darter saw Taylor hit back and he then levelled on double ten, but van Gerwen broke throw by finishing 121 for a 12-darter and stepped in following four further misses from his rival in the next two legs to establish a 12-9 cushion.

Taylor stepped in to win the next two as he cut the gap to 12-11, but he was unable to break throw as the four more legs went with the throw to leave van Gerwen on the brink of victory at 15-13 before double 18 sealed glory.

Taylor admitted: "I missed too many doubles and it's my own fault, but I'm proud to have reached the final but I'm disappointed that I lost.

"I gave him chances and he took them, and fair play to him - it's set him up now for the rest of the year. He's a phenomenal darts player."

Van Gerwen took home £102,500 as the champion, including a Group Winner Bonus, while Taylor pocketed £52,500 in prize money and Dave Chisnall scooped a £30,000 bonus for his brilliant nine-dart finish last Sunday evening.