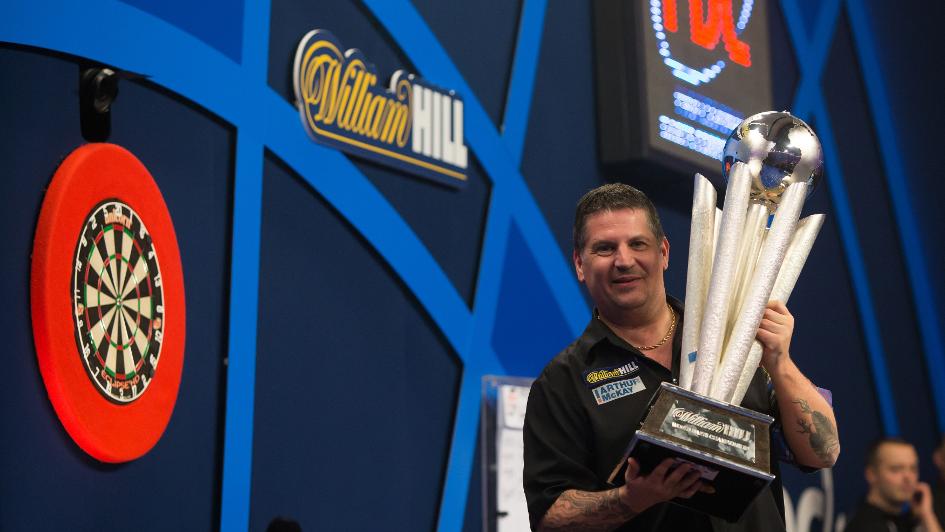 Anderson showed tremendous mental strength to shrug off losing nine of 10 legs after going 3-1 up, a no score and shouts from the crowd at 4-4 to collect dart's richest prize.

Taylor eased past old foe Raymond van Barneveld in the last four and was favourite in what was his 20th world final.

However, struggling to hit doubles in the bottom corner coupled with heavy scoring from Anderson meant it was the Scot who left with the trophy and £250,000 first prize.

Anderson showed few signs of nerves early on with a double 20 rounding off a 120 finish. The two traded legs, but the Scot had the last laugh in the opening set, hitting the bull to go one up.

Anderson raced to a two-leg lead in a second but Taylor, who eased to victory over Raymond van Barneveld in the last four, fought back to take the second set, although he needed three throws at the double 10 to level the match.

Anderson won the first leg of the third, and although Taylor pulled out a 127 checkout in the second game, he missed three goes at the double eight as Anderson took the set, before extending his lead to 3-1.

Taylor, who won his first world crown back in 1990, was struggling to find his doubles in the bottom left of the board, but stormed back winning six straight legs to level the match.

Anderson broke the run with a double one 'mad house' to take the opening game of the seventh, but Taylor was in no mood to let his grip slip as he took the lead.

Anderson was desperate to halt Taylor's run and a vital 180 in the fifth game put him in prime position to take the set against the throw, but a miss on the bull let Taylor back in.

The Power missed three throws on double 12 as Anderson hit double eight, Taylor's worst double to date, to make it 4-4.

Anderson inexplicably knocked out his opening two trebles of the set with his third to register a no score before he grew frustrated with a spectator who he felt was shouting out of turn.

Two legs down Anderson, however, showed great heart to take the set.

The 40-year-old threw his 60th 180 of the tournament before going 6-4 ahead and one set away from victory.

Taylor was one arrow away from a nine-darter at the start of the 11th before going on to win the set 3-0.

At two each Anderson had a chance to see out the match, but he could not finish as Taylor levelled again to make it six sets each.

Anderson took the opening game of the decider, before Taylor again missed three double 16 before the Scot hit double 18.

Anderson hit a 180 to start the third leg before missing bull for victory. Left with with 25, he hit one then double 12 to see out the match and complete a remarkable victory.

Anderson admitted that the ninth set was the turning point.

"I think so, I thought 'right this is it', then Phil took next two sets then I thought 'that's it, it has gone now'," Anderson told Sky Sports 1.

"Phil, he is the best, always will be the best, even in a hundred years time, so that does make it a wee bit more special."

Taylor rued his inability to find key doubles when it mattered most.

"Doubles cost me a couple of sets," Taylor said. "He took advantage. My double eights and double 16s were awful.

"He's a cracking player and a lovely lad."