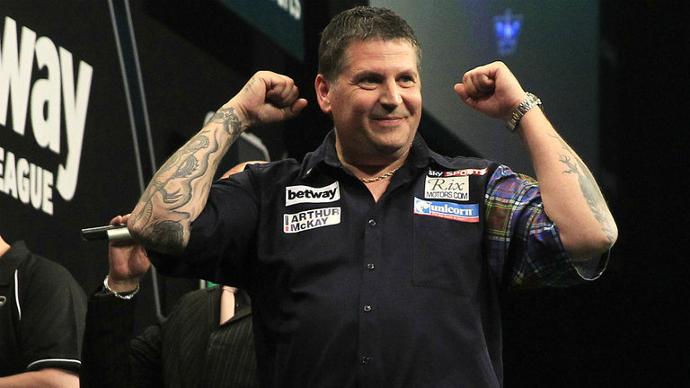 Anderson, who also won the Players Championship, took advantage of some sloppy finishing from table-topping Van Gerwen to take home the title for the second time in his career.

"It's been four years since I got my hands on this baby, but Chizzy (Dave Chisnall) was the best player of this tournament," the borders thrower told Sky Sports 1.

"Michael van Gerwen is hot property. You won't see him lose many tournaments but I'm glad he did tonight."

Anderson, who had said he wanted to play Van Gerwen, added: "I know how he plays. He throws the darts and gets on with it. Those are the games I like to play in."

'The Flying Scotsman' came hurtling back from 2-0 down to win seven out of eight legs before the interval to move to within four legs of a second Premier League crown following his victory in 2011.

Van Gerwen missed nine darts at the double up until that point, although seven of those came in the eighth leg of the match.

A two-dart rot stopper in the 11th leg helped the Dutchman regain his composure before missing more vital shots at the double at 7-5 to allow his opponent to nip in and hold throw.

Anderson moved to within one leg of the title by taking out 96 and he wrapped up victory by holding his nerve and nailing double top.

"If you lose you're never happy," said Van Gerwen. "I can only blame myself so roll on the next tournament.

"You can't win all the time so I still need to be happy with the tournament."

Anderson's semi-final had proven a tight affair, with the opening six legs shared before Chisnall - aided by a 152 checkout for a 12-darter, a 14-darter to break throw and a 13-dart leg - moved 6-3 up in the blink of an eye.

He also held a 7-4 advantage before Anderson hit back-to-back 14-darters in a three-leg burst of his own to level - only to then miss tops to break throw as Chisnall edged back ahead at 8-7.

Anderson finished tops to level before the duo traded 68 checkouts to send the game into a deciding leg, with Chisnall opening with a 180 only to miss three match darts at double 16, eight and four to allow the Scot in for a 116 checkout as he sneaked the victory.

The second semi-final proved equally dramatic as van Gerwen ended Raymond van Barneveld's proud defence of the title with a 10-8 triumph in a repeat of the 2014 final.

Van Gerwen landed a 121 finish for a 12-darter as the pair shared their opening eight legs before van Barneveld took three in a row to pull clear - missing double 12 for a nine-dart finish as he took out a ten-darter before then finishing 110 for a 7-4 cushion.

Van Barneveld landed his seventh 180 of the contest as he hit back in the next, but van Gerwen was first to a double in leg 18 as he fired in double four for the win.

Anderson will now be aiming to win the triple crown when the roadshow heads to Blackpool later this summer at the World Matchplay, live on Sky Sports.

The victory for 'The Flying Scotsman' was also good news for our Carl Longhawn after he backed him at 100/30 in his preview of the final night of this season's Premier League.

Following Week Nine, the bottom two players from the league table were eliminated - Kim Huybrechts and Peter Wright. Revised fixtures for Weeks 10-15 have been announced, with the remaining eight players facing each other once more during the final six league nights.