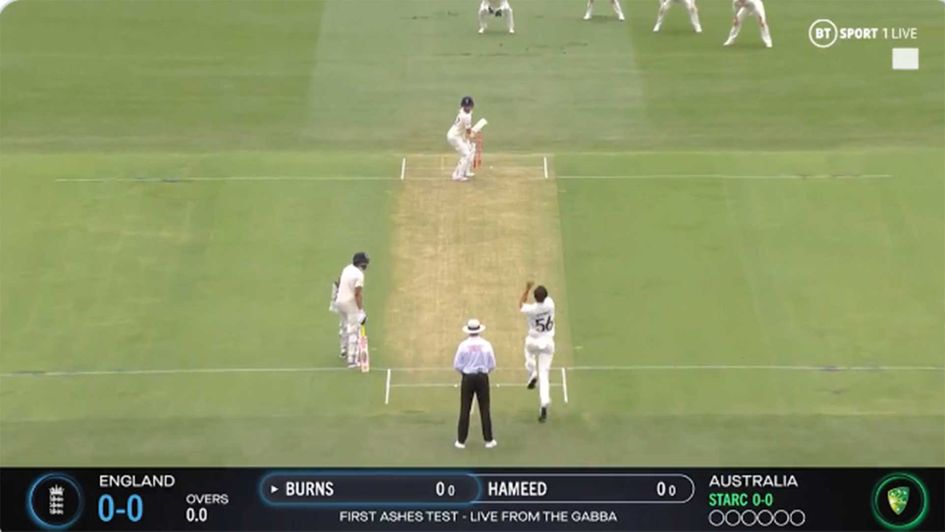 Scroll down to watch Rory Burns get bowled

Watch: Rory Burns is bowled for a duck with the first ball of the Ashes series at the Gabba

England's Ashes series got off to a nightmare start when Rory Burns was clean bowled with the very first ball of the first Test at the Gabba.

The tourists had decided to leave 1,156 Test wickets on the sidelines for the opener against Australia, with Stuart Broad joining James Anderson in missing out as Joe Root chose to bat first.

For Stokes it represented a first competitive appearance in five months, with the vice-captain having missed much of the English summer while he took a break to prioritise his mental and physical health.

Root won the toss and opted to ask Australia to field first, a brave decision with grey skies overhead and an unusually green-looking pitch underfoot. And so it proved when Mitchell Starc took Burns' leg stump with the very first ball.

It was only the fourth time in Ashes history that a wicket had fallen this early in a series.

🤞 It's so important England's openers can make a solid start at the Gabba...

Dawid Malan didn't last much longer as he was caught by Alex Carey off the bowling of Josh Hazlewood for just six but even worse was to come as Root fell for a nine-ball duck.

Hazlewood took the wicket of the skipper, who edged to David Warner in the slips with his side's reeling on 11-3 inside the opening 30 minutes.

Unbelievable start for Australia at the Gabba! 🔥#Ashes pic.twitter.com/j8YZjTMwvd

Jos Buttler's 39 and a handy 35 from Ollie Pope helped England claw their way to 147 all out but, despite rain and bad light shortening play, they find themselves snookered after day one of the series.

Click here for the full report from Rory Dollard