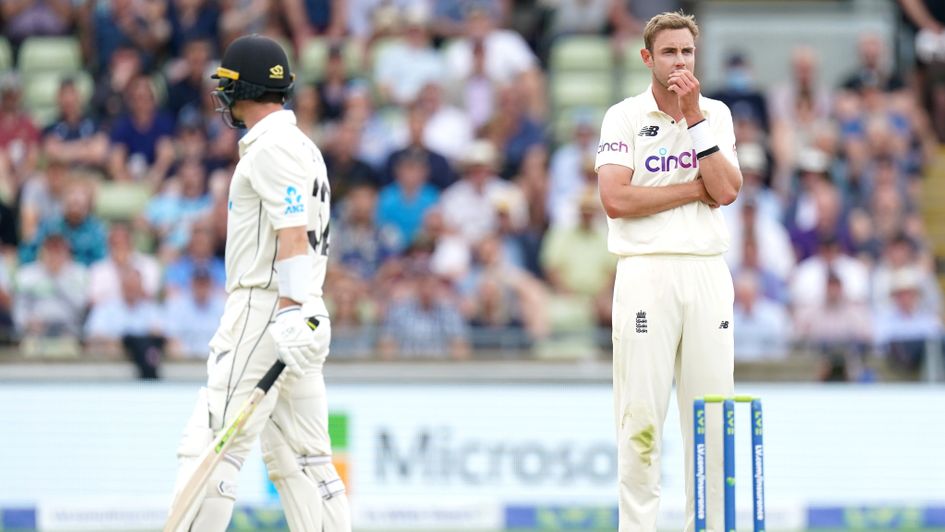 Stuart Broad and England were left frustrated on day two

England endured a frustrating day in the field at Edgbaston as a debatable umpiring decision, a dropped catch and some high-class batting left New Zealand in charge of the second Test.

England won the toss and elected to bat

Replying to England’s 303 all out, the tourists closed just 74 behind on 229 for three – with an unexpected breakthrough off the final ball of the day raising the home side’s flagging spirits.

It was taken by Dan Lawrence, who had earlier been left stranded on 81 not out in pursuit of a maiden Test century and consoled himself with a maiden Test wicket instead.

With just 14 to his name in first-class cricket, he was given a late opportunity and had Will Young caught off bat and pad for 82.

Stuart Broad had been the standout bowler with two for 22 in 15 overs but he will still feel aggrieved that a questionable umpiring decision stopped him making an even bigger impact.

The opener scored a double century on debut last week but England were sure they had him for just 22 until the left-hander stood his ground and the on-field umpires sent a soft ‘not out’ signal upstairs.

The bowler was visibly unimpressed by that and when third umpire Michael Gough also found in the batsman’s favour, it did little to improve his mood.

Broad could yet find salt being rubbed into his wounds if the match referee – his father Chris – opts to censure him for dissent.

Replays seemed to suggest that England, and Broad, had been harshly treated but Conway was free to score another 58 runs.

Broad and Crawley eventually got their man, this time whipping flamboyantly to the mid-wicket boundary, but by then the damage had been done.

Conway, who looks to the manor born at this level, put on 96 for the second wicket with Young, who really should have been gone for just seven.

Reprieve for Will Young, as Joe Root juggles and spills a regulation chance at slip.

That was his score when Olly Stone clipped his outside edge and Joe Root juggled a regulation chance to the floor. The cost of that drop came in at another 75 runs.

England had started on 258 for seven and lost their last three wickets for 45. Mark Wood started positively, crashing six boundaries off Trent Boult and Matt Henry in the first 20 minutes.

Lawrence could barely get a look in until Henry bowled Wood for 41, but his prospects of a hundred diminished when Broad was caught behind for nought.

James Anderson’s arrival at number 11 brought a standing ovation, an acknowledgement of his record-breaking 162nd cap rather than his batting ability, and he was lbw to Boult with Lawrence still 19 short.

After the change, Broad prised out Tom Latham in his first spell, winning a plumb lbw from round the wicket. He was equally sure he had done for Conway in the 10th over but, as soon as the soft signal went against him, the writing was on the wall. The seamer made no attempt to disguise his frustration.

England were tepid between lunch and tea, going wicketless as Conway and Young added 87 to the score.

Root’s drop was as close as they got to a breakthrough, but Young was unflappable after that, while Conway took every chance to indulge his balletic pull shot.

A misshapen ball allowed England to change it for one that offered considerably more swing and allowed Broad to probe for the edge in a wonderful spell. He found Young’s on 40 but was exasperated to see it bounce in front of wicketkeeper James Bracey on the half-volley.

He was fully deserving of another success and got it when the confident Conway pinged a leg-stump delivery out of the middle of his bat but straight to Crawley in the deep. This time, at least, there was no question over the take.

Conway cannot believe it, as he picks out Crawley at deep backward square to hand Broad his second wicket! 💪

Anderson was still seeking the first wicket of his record-breaking appearance and came close in his 17th over, when new man Ross Taylor was given lbw. The veteran almost accepted his fate but will be glad he called for DRS, which showed the ball sliding down leg.

Root sent down 13 overs in a bid to bring some variety but it was a late look at Lawrence’s ungainly tweakers that paid off.

Young, who had played so patiently and decisively, will regret joining the small club of batsmen to fall at Lawrence’s hand, but the delivery itself did everything it needed to.