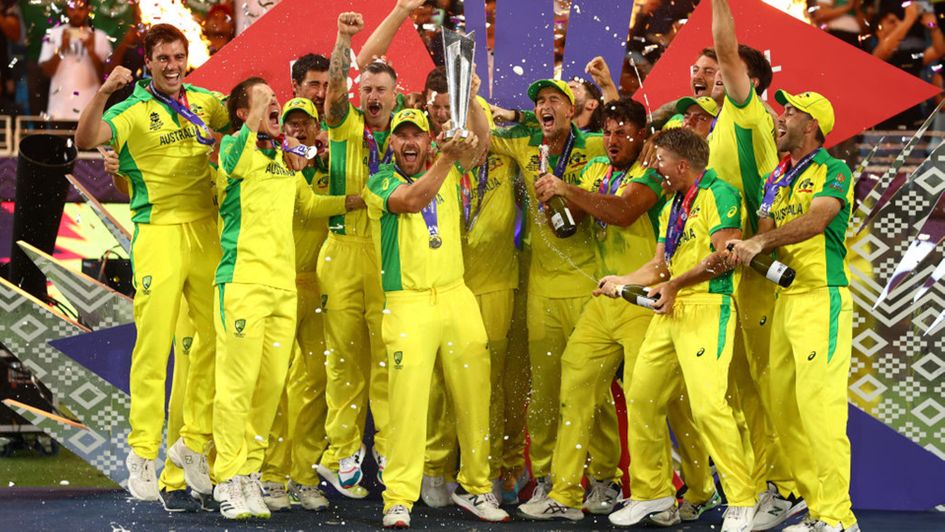 Australia were crowned T20 World Cup champions for the first time as twin fifties from David Warner and Mitchell Marsh consigned New Zealand to another runners-up finish on the global stage.

Australia were crowned men’s T20 World Cup champions for the first time as twin fifties from David Warner and Mitchell Marsh consigned New Zealand to another runners-up finish on the global stage.

The Black Caps were seeking a maiden T20 crown themselves to add to their World Test Championship triumph and were given hope by Kane Williamson’s atypically belligerent 85 from 48 balls following a ponderous start batting first in Dubai.

New Zealand’s 172 for four represented the highest score in a T20 final but it was not enough as they lost by eight wickets, with Warner’s 53 off 38 deliveries and Marsh’s 77 not out off 50 deliveries getting Australia home.

Unlike the 2016 showpiece, when the West Indies beat England thanks to four consecutive sixes by Carlos Brathwaite in the last over, there was no grandstand finish as Australia overhauled their target with seven balls to spare.

Williamson, who has been troubled by a longstanding elbow injury in recent weeks, benefited from being dropped on 21 to hammer 10 fours and three sixes, with Mitchell Starc coming in for heavy punishment.

He finished with 4-0-60-0, the worst bowling figures in a T20 World Cup final, but Josh Hazlewood was exemplary as he mixed up his speeds to finish with three for 16 and there was rarely any sense of Australia folding.

While Warner finished behind only Babar Azam in the tournament’s run-scoring standings, with 289 at a 57.8 average and 147.44 strike-rate, Australia’s victory owed much to Marsh, who clubbed six fours and four sixes.

He was peculiarly dropped for what was Australia’s only loss of the campaign against England but proved his worth here, crunching his first three deliveries for boundaries as he consistently put New Zealand on the back foot. 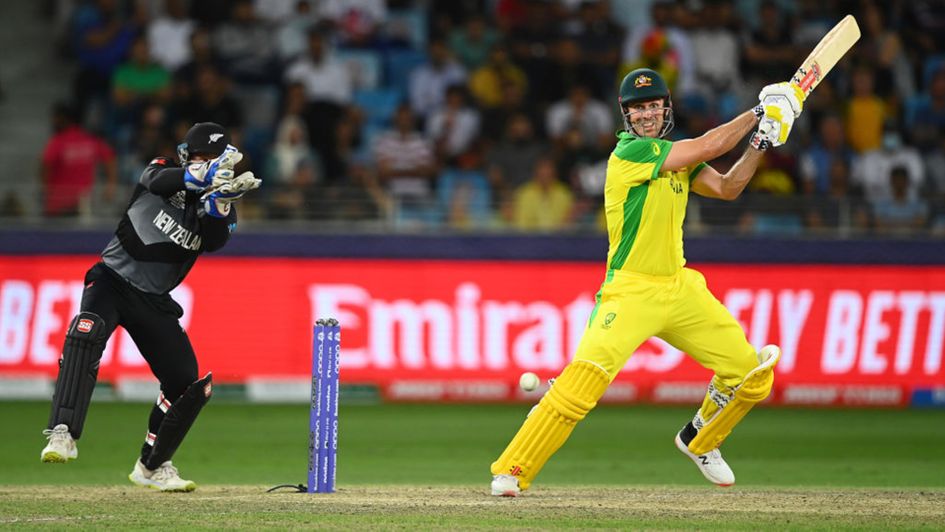 New Zealand, beaten finalists in the 2015 and 2019 50-over World Cups, were at a disadvantage from the off after being put in, with teams who have batted second under lights at this venue winning every time in the tournament.

If they were unfazed by losing the toss then it was not apparent as they crawled to their tournament-low 32 for one off the powerplay on a sluggish pitch, with Daryl Mitchell prodding and under-edging Hazelwood’s leg-cutter through to Matthew Wade diving forward.

The first 28 balls in Williamson’s union with Martin Guptill were boundary-free and even though the New Zealand captain shook off the inertia by driving then pulling Marsh for successive fours there was still the sense the Black Caps needed something special in the second half of their innings after reaching 57 for one at halfway.

Williamson provided it but only after he was shelled in the deep by Hazlewood off Starc, an error compounded by the ball dribbling for four. It was a costly drop in a profitable match-up for New Zealand as Williamson took 39 from the 12 deliveries he faced from Starc.

Back-to-back leg-side sixes came off Glenn Maxwell as Williamson reached a 32-ball fifty but he was particularly disdainful towards Starc, plundering 22 in an over courtesy of two streaky edges then two authoritative strokes, either side of a sweetly-timed pull over midwicket for six.

Guptill holed out for a subdued 28 to the impressive Adam Zampa, as did Glenn Phillips for 18 following a knuckle ball from Hazlewood, who had the dangerman later in his last over when Williamson shovelled to long-on from another slower delivery.

Williamson’s efforts in a showpiece few expected – with New Zealand overcoming world number one England in Wednesday’s semi-final and Australia defeating tournament favourites Pakistan 24 hours later – made sure there was at least some pressure on Aaron Finch’s side.

Finch, who has bristled at Australia being “written off” recently, succumbed for five when a top-edge off Trent Boult led to a fantastic sliding catch from Mitchell, but Marsh ignited Australia’s charge by heaving his first ball for six off Adam Milne then immediately taking the fast bowler for back-to-back fours.

Warner took time to settle but he upped the tempo as he clubbed leg-spinner Ish Sodhi out of the attack with two fours and a towering straight six, while the opener went to a 34-ball half-century by taking Jimmy Neesham the distance in his only over.

Boult had his second wicket when Warner had his stumps lit up after missing a slog sweep, ending a 92-run stand with Marsh, who was undeterred as he brought up a 31-ball half-century with a straight six as Sodhi was brought back, conceding three wides in a nine-ball over to help Australia’s cause.

From there Marsh was largely content to defer the big-hitting to Maxwell (28 not out from 18 balls), whose reverse sweep took the bottom edge before running away for four to see Australia to victory.