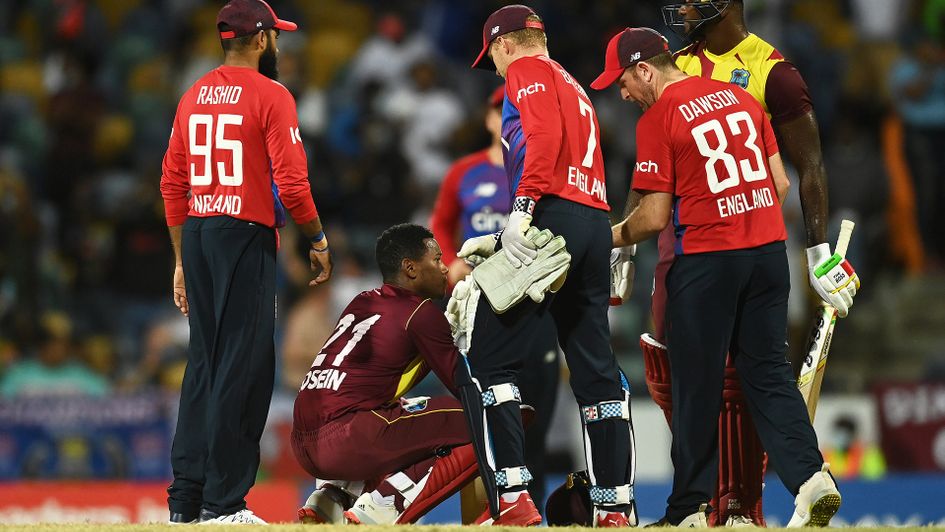 England held on for a narrow one-run victory

England bounced back from their opening night capitulation to beat the West Indies by one run in the second Twenty20 in Barbados.

A day after slumping to 103 all out, conjuring unwelcome memories of the Test side’s recent batting woes against Australia, Jason Roy’s 45 from 31 balls helped England to 171 for eight at the Kensington Oval.

The game looked over when West Indies slumped to 98 for eight after 15.1 overs but some incredible hitting from Romario Shepherd (44no) and Akeal Hosein (44no) gave the tourists a late scare.

They needed 30 runs to win off the final over and almost produced a miracle finish by scoring 28 of them as they lost by one run.

🏏 West Indies needed 30 runs off the last over to beat England...

😅...and they managed 28, including two wides, two fours and three sixes!

More than half Roy's runs came in one over after a ponderous start, with Roy taking down slow left-armer Fabian Allen, turbo-charging England’s innings as they added 107 in the final 10 overs.

The tourists initially struggled to consistently score when pace was taken off the ball but the Windies gave Moeen Ali two chances as he made 31 while Chris Jordan’s cameo 27 from 15 balls swelled England’s total further.

A nine-wicket defeat on Saturday in the first of five matches, where England slipped to 49 for seven at one point, meant Roy and Tom Banton were understandably cautious of taking too many risks from the off on Sunday.

Banton connected with a sweep off slow left-armer Akeal Hosein, the ball sailing into the stands at deep square, while he and Roy – having made two off his first nine balls – cut loose with reverse sweeps off Allen.

However, the spinner made a double breakthrough in the sixth over. After a second Banton reverse sweep, a powerful drive from the opener lodged into Allen’s midriff and he held on while James Vince was bowled later in the over, the ball beating the outside edge and just kissing the stump to leave England on 40 for two after six overs.

Moeen offered a couple of chances early into his innings, first given a reprieve on four when skewing high into the leg side only for Darren Bravo to be unsighted by the sun as the ball landed a couple of metres short of him.

Moeen should have been on his way on 13 after offering another skier into the leg-side but Nicholas Pooran missed a simple opportunity running in from the boundary, failing to even get his hands to the ball, which hit his stomach and bounced to the floor.

At 64 for two at halfway, the runs were trickling rather gushing, so Roy, rather becalmed in getting to 17 off 23 balls, cast off the shackles as Allen conceded three fours and two huge sixes in his final overs to spoil his figures, finishing with 4-0-50-2.

Roy’s surge was ended when he dragged a wide delivery in Romario Shepherd’s first over to long-on, finding the reliable hands of Kieron Pollard, whose cutters were proving something of a problem for England’s batters.

He was carted for his first boundary by Moeen, who thumped handsomely over midwicket for six, but then chased a very wide delivery, just getting a toe-end to short third as England slipped to 114 for four.

Sam Billings made a second successive single-figure score after top-edging a sweep, but Jordan added some late impetus, swinging high and handsome over the longer cover boundary, arguably the shot of the innings.

He was one of three wickets to fall in the final three overs – either side of Eoin Morgan and Liam Dawson – but England’s collective efforts helped them to what looks a competitive total.