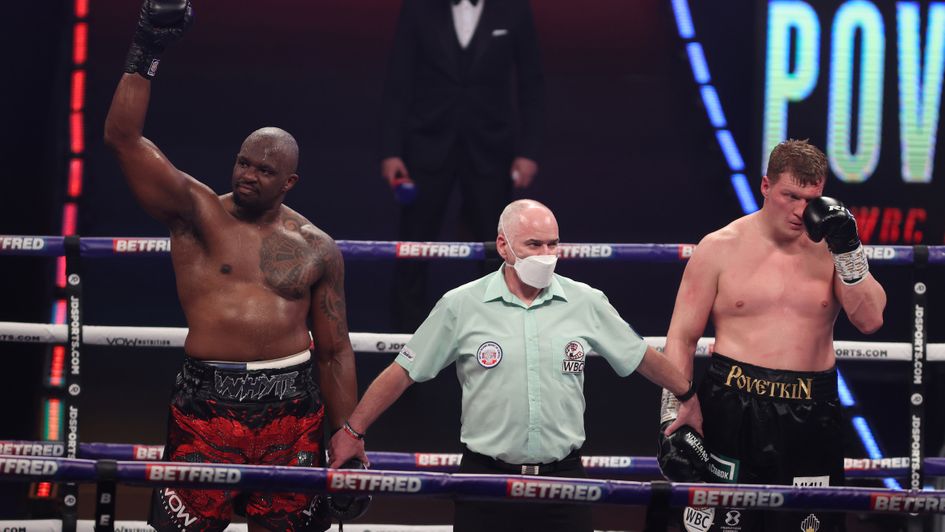 What comes next for Dillian Whyte after Alexander Povetkin demolition job?

Dillian Whyte rekindled his world heavyweight title dreams by crushing Alexander Povetkin on Gibraltar last weekend. In that aftermath of that impressive performance, Furyjoshua.com assesses where ‘The Body Snatcher’ fits into boxing’s marquee weight class now, and what might come next.

Dillian Whyte’s thunderous demolition of Alexander Povetkin means he is now back at heavyweight boxing’s top table, armed with a stack of chips and desperate to cash in by finally realising a lifelong dream of becoming champion of the world.

Whyte famously waited more than three years for a shot at the WBC world heavyweight title, a shot which never came after he was knocked out last August by a Povetkin uppercut as sickening as it was spectacular.

The pressure was huge ahead of last weekend’s much-delayed rematch, but to his eternal credit Whyte delivered a career-best result and another highlight-reel stoppage courtesy of a trademark left hook.

The pre-fight narrative was that Whyte could have been gun-shy after his brutal KO loss at the fists of the Russian in their most recent fight. That narrative was expunged within the first minute as Whyte started hurling bombs at a shell-shocked opponent.

Much like the first fight, it was ‘Seek and Destroy’ stuff again from Whyte, who showed very little respect inside the ring to an ageing warrior.

However, the Brixton man showed his class afterwards when he found a stool for his rival to sit on shortly after the towel had come over the ropes from the Russian corner. And when the brave Povetkin finally rose to his feet, they embraced warmly.

Whether Povetkin was in tip-top shape for this after his battle with Covid-19 or not, it was a near-perfect display from Whyte. He has always carried genuine power but his left jab has now developed into a particularly potent weapon.

Following that seismic upset delivered by the Russian last summer, it was announced that two fights between world champions Anthony Joshua and Tyson Fury have been agreed, suggesting a lengthy wait for any of the pretenders to the heavyweight crown.

Upon hearing that Fury v Joshua news at the time, Whyte himself must have privately felt he may never get a shot at the richest prize in sport. A perennial outsider looking in.

However, on the same night that Whyte exacted sweet revenge after rag-dolling his Russian opponent into an impressive fourth-round surrender, Tyson Fury’s father cast doubt on the Gypsy King’s two-fight deal with AJ.

Appearing on BT Sport as a pundit, an animated John Fury questioned just how close Fury v Joshua actually was when he said: “What have they signed? They’ve signed nothing in my eyes. They’ve got no date, no venue, no nothing.

The always entertaining and engaging Fury Sr can be given to hyperbole, so don’t be surprised if a date and a venue are actually announced soon by those involved in negotiations for heavyweight boxing's first ever unification contest in the four-belt era.

However, if Fury vs Joshua problems arise then Whyte is once again primed to be an alternative dance partner for either champion.

‘The Body Snatcher’ has built up a serious fan base around the world with his “Maximum Violence” mantra and willingness to rumble with the best.

Dillian jovially suggested Eddie Hearn should get him "an easy fight" to "make some money" when interviewed on Sky Sports Box Office after putting Povetkin away in round four at the Europa Point Sports Complex in Gibraltar.

Back from the brink

A fight with former long-reigning former WBC champion Deontay Wilder is already being talked about, yet Whyte could do worse than break with tradition and be a bit more cautious over the next 6-12 months.

His whole career hinged on the outcome of the Povetkin return. A defeat would have seen him demoted back to British/European level. And at the age of 32 it would have taken a lot to rebuild him into a legitimate world title contender. The mental pressure that he has faced over the past 12 months must have been immense, and he has been incredibly active by modern heavyweight standards.

Indeed Whyte has fought 12 times in less than five years, so now might be an ideal time to recline and reassess while his body and mind heal. He has the qualities of a mainstream star. He’s not short of options, but simply has to make the correct career move next.

A fight between Wilder and Whyte would definitely be a pay-per-view hit. But why should he take a risk against a fighter coming off a loss who remains one of the most destructive punchers in heavyweight history?

Say he does go in and puts Wilder away next, even in America where Hearn is eager to showcase him, some critics might claim that he only finished the job Fury started when he bludgeoned the American to defeat in Las Vegas in February 2021.

A defeat to ‘The Bronze Bomber’ though and there’s a real chance he may never get to fight for the world heavyweight title, the crown he has sacrificed so much for both personally and professionally.

Wilder is a legitimately risky fight and while the financial rewards would be decent, they would pale into insignificance for what he would get for fighting AJ or Fury for the undisputed heavyweight crown.

The 28-2 (19) Whyte is no stranger to adversity of course, rising from impoverished beginnings in Jamaica and becoming a father at the age of 13 to scale the heavyweight heights. He is now once again set to claim the comfy chair as the mandatory challenger for the WBC heavyweight championship of the world, and this should be his moment to take stock.

He will have been interested to hear John Fury’s assertion that “Tyson needs to fight twice this year, with or without AJ”.

If negotiations stall (and it remains a big ‘if’ at this stage) for the aforementioned heavyweight superfight, Whyte is right at the front of the queue again to box for the WBC belt held by ‘The Gypsy King’.

But with no immediate prospect of a title bout on the horizon, it might be time for Whyte to move away from that admirable ‘I’ll fight anyone’ mindset and play the long game.

Supported by the irascible Hearn, Whyte has built himself into a pay-per-view attraction in his own right, but that doesn’t mean every fight must be a make-or-break encounter.

When he looks back on a tumultuous 12 months, he will surely acknowledge privately that those Povetkin battles were ‘high risk, low reward’ fights.

In recent years, he has accepted a lot of risky assignments during his well-documented pursuit of the heavyweight crown. He is on the brink once again, but there really is no immediate need for him to gamble and go all in. As Kenny Rogers once crooned:

That the secret to survivin'

Is knowin' what to throw away

And knowin' what to keep

Whyte is finally holding a few ace cards. Through sheer force of will and an unconquerable spirit, the Brixton banger has made himself relevant again, and it’s improbable he would have to wait 1000 days for a title shot this time around.

He has waited for so long for his date with destiny, surely a little while longer won’t hurt. Patience is bitter, but the fruit is always sweet.