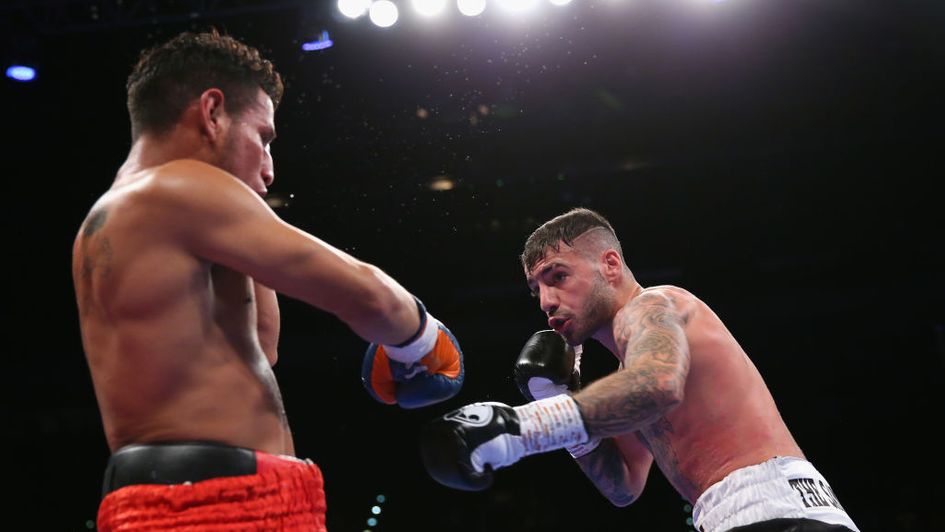 Lewis Ritson (right) is backed for a points win

Chris Oliver is backing Lewis Ritson to make home advantage count and win in front of 1,000 fans on Saturday night.

This weekend marks the end of an era as Matchroom's longstanding partnership with Sky Sports comes to end with their final show together in Newcastle.

Eddie Hearn's promotional company has signed an exclusive deal with DAZN and the broadcasting landscape for UK fans will look very different when they go their separate ways after this one. With that in mind, it's a little disappointing that they are hardly going out with a bang with Saturday's rather underwhelming card, but the show could be saved by what should be an exciting top of the bill clash between LEWIS RITSON and Jeremias Ponce.

A huge part of Ritson's success story has been the passionate and noisy backing of his local fans, so it is great to see 1,000 of them allowed back into the Eagles Community Arena and they should be rewarded with plenty of action in the main event.

The North Tyneside man gained his large following by tearing through the domestic lightweight scene in thrilling and rapid fashion, winning the Lonsdale belt outright in just eight months, but the step up to European level proved too much when outpointed by Francesco Patera in 2018.

That sparked a move up to light welterweight where four wins have followed, but there has to be a big asterisk next to his last victory as he was very fortunate to escape with a split decision over Miguel Vazquez in October. In his first bout against a former world champion, Ritson couldn't handle the constant movement and slippery skills of Vazquez, as he struggled to get his own shots off and was constantly beaten to the punch by the busy Mexican.

There were promising signs in his barn-burner with Robbie Davies Jr before that, when outpointing the Liverpudlian in a thriller, which showed he has the engine for 12 rounds up at 140lbs and that he can do it the hard way as well. Davies was happy to stand his ground and engage, though, and the Vazquez performance served to confirm fears from the Patera defeat that the flat-footed Ritson is always going to struggle against someone with quick feet and a tendency to box rather than brawl.

Hence the reason Ponce has been chosen for this assignment. Not only does the Argentine boast a top-five IBF ranking, he is very much offensively minded and Ritson won't have to go looking for him.

The visitor brings a perfect 27-fight record (17 early) to the party, but against what level of opposition is open to debate as he has only left Argentina twice and his last two opponents in Ruben Lopez (KO 1) and Jonathan Jose Eniz (UD) had a combined total of 27 losses. He did outpoint a credible opponent in Rico Mueller when travelling to Germany in 2019, though, and venturing to Europe again will hold no fears.

Despite this being a better match-up style-wise for Ritson, it remains a dangerous one and he will be all too aware that there has been no shortage of South Americans coming to the UK and causing upsets this year. While 'The Sandman' is a 1/2 favourite, there has been some interest this week in Ponce, who is now 19/10 and will be looking to put pressure on the favourite from the off. Tall and rangy, he comes forward pumping out his long jab, looking to follow it up with the heavy stuff.

Ritson will be quite happy to oblige his opponent in trading leather and we could be in for a repeat of his classic with Davies Jr. In that contest, the local man showed for the first time that he can box effectively on the back foot at times and that may well be needed here, as he hasn't been able bully people at the new weight like he did at 135lb and needs a little more to his game.

Ritson really had problems with the speed of Vazquez but there should be no repeat of that here. Ponce appears to have much slower hands and the home fighter can capitalise on that with his heavy combinations, especially with the left hook, which he uses to great effect.

Ponce does tend to leave himself open when throwing and was put down by Eniz in his latest bout, which suggests Ritson can make a dent in the younger man and the stoppage is tempting at 13/5 in a fight that should be fought at close quarters for long periods.

However, Ritson hasn't really carried his power up in class or in weight, with three of his four fights in this new division going the distance, so the more likely outcome looks to be RITSON ON POINTS at 6/5. Thanks to an edge in speed and accuracy, the 27-year-old can score more regularly and, buoyed by the return of his Newcastle faithful, can prevail on the scorecards in a hard-fought contest.

Sky Sports signalled their intention to remain a big player in boxing when this week they announced a four-year deal show to broadcast Top Rank's US shows, which starts this weekend with SHAKUR STEVENSON versus Jeremia Nakathila from Las Vegas.

The bad news for UK fans is that these shows are going to be in the early hours of the morning, the good news is we'll get to see top-class fighters live and Stevenson (15-0) certainly falls into that category.

One of the hottest prospects in the States, the Olympic silver medallist has already won a world title at featherweight and the talented 23-year-old is now on the hunt for belts at super featherweight. Following two dominant wins in the 130lb division, he bids to inflict a second career defeat on Nakathila (21-1) and become the first man to stop him.

“When I lost in the olympics, it turned me into an animal.”

The Namibian's sole loss came in his only bout outside of Africa, when dropping a majority decision to local man Egveny Chuprakov in Russia, but he has bounced back with nine straight stoppage victories. Nakathila can clearly bang, but he could be punching thin air here against a man considered a future pound-for-pound star.

With lightning speed and impressive reflexes, Stevenson is an extremely gifted southpaw, with rapid combinations and boasting every shot in the book in his arsenal. As well as breaking fighters down well with his superb shot selection when on the offensive, his superior reactions enable him to make opponents miss and pay with spiteful counters on the back foot, and that could be the story of this fight.

As Nakathila presses the action in attempt to land his power shots, the elusive Stevenson can pick him off regularly and accurately on the way in before FORCING THE STOPPAGE somewhere after the halfway mark at 2/1.