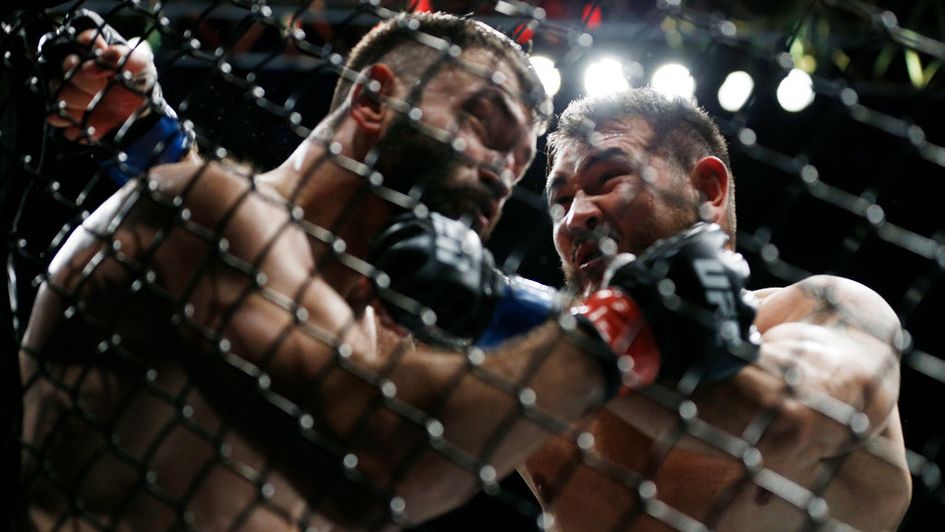 Augusto Sakai is the value call at this weekend's UFC Vegas 59, according to William Dean.

2pts Thiago Santos vs Jamahal Hill to last Over 2.5 Rounds at 5/4 (General)

Thiago Santos has always been revered as one of the most terrifying looking MMA fighters of all time, with a giant hammer tattooed on his chest to complement his colossal frame. The Brazilian always fought exactly the way you would expect, with aggression and devastating knockout power, making him a fan favourite amongst UFC fans.

Unfortunately, Marreta has recently been a shell of the devastator he once was, as significant knee injuries sustained in his 2019 split decision loss to Jon Jones seem to have completely robbed him of all explosiveness.

Santos now looks incredibly stiff on the feet and struggles to pressure his opponents, meaning he can only really land considerable offence when they are the ones engaging him. As a result, the blockbuster Brazilian with 11 knockout victories now looks worryingly gun-shy, having gone the distance in three consecutive dull fights.

Conversely, Jamahal Hill looks to be a fighter on the rise having continued to impress against higher ranked fighters. Sweet Dreams finished all but two of his seven opponents under the UFC banner, and looks to have a great blend of speed and power for a Light Heavyweight.

The key question surrounding this fight concerns Hill’s gameplan, as a controlled and patient approach from distance would surely be the safest option to take. The American knows that Santos’ only real path to victory would be to land a knockout blow from close range, so maintaining the necessary gap is surely the priority.

If so, this fight could likely go longer than many expect, with Hill taking his time and staying free from danger.

Santos’ 2018 victory against England’s Jimi Manuwa still remains as one of my favourite UFC fights of all time, but it is highly unlikely we ever see the Brazilian looking that dangerous inside the Octagon these days. Hill should be wise enough to still proceed with caution though, so a bet on OVER 2.5 ROUNDS certainly appeals at 5/4.

Sakai to keep it standing

A Heavyweight bout between AUGUSTO SAKAI and Sergei Spivac also features on the main card, in a true style clash of striker against grappler. The Brazilian will undoubtedly be looking to remain upright and utilise his power advantage, whilst Spivac has proven himself to be a formidable wrestler and grappler in the UFC so far.

Unlike other divisions in MMA, Heavyweight gives fighters the flexibility to weigh in anywhere between 205 and 265lbs, which can allow them to maximise their advantages and gameplan accordingly. Despite being a grappling-based combatant, Spivac typically weighs in at around the 240lbs mark – likely giving him a significant advantage to the consistent 265lbs Sakai.

Spivac is a capable wrestler but overcoming a 25lbs weight discrepancy will certainly make things difficult for him. Furthermore, Sakai has historically done his best work in the clinch, so the Moldovan will be putting himself in danger every time he attempts to close the distance.

Both fighters have a clear path to victory and, at Heavyweight, things can change in an instance. While I can certainly understand the logic in deeming Spivac the favourite, the betting odds have drifted much further than they ever should. The value is certainly on backing SAKAI TO WIN at 11/5, with an added wager of SAKAI TO WIN by TKO/KO at 7/1.