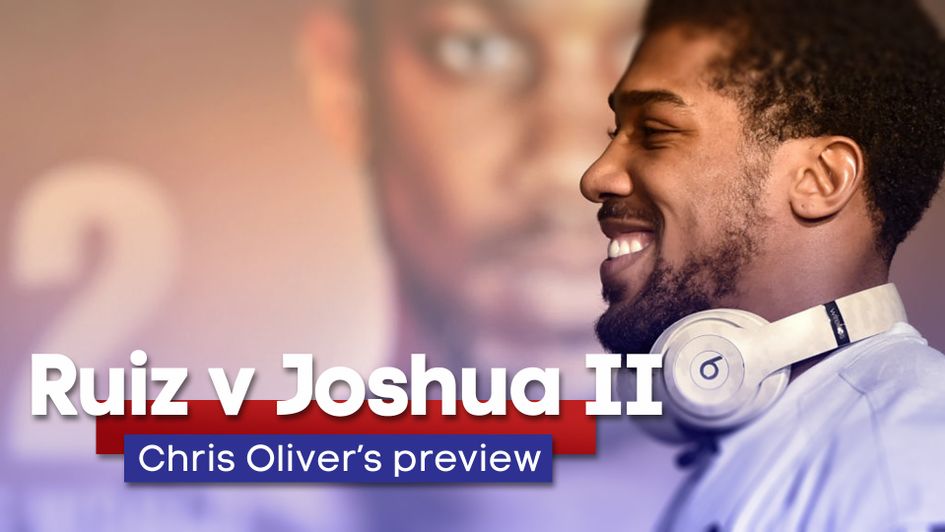 Chris Oliver has been in excellent form with his boxing tips - which is good news for Anthony Joshua, who he's backing to gain revenge on Andy Ruiz Jr.

1pt Joshua to win by unanimous decision at 5/1

2pts Alexander Povetkin to win at 7/4

Anthony Joshua and Andy Ruiz Jr take their rematch to the desert in Saudi Arabia to find out if what we saw first time around was just a mirage or not.

Ruiz sprang one of the biggest upsets in recent memory when stopping Britain's golden boy in New York on June 1, dropping the previously unbeaten champion four times before the referee waved it off the in the seventh round and making a mockery of the pre-fight odds in the process.

Unsurprisingly, it's a different story with the betting this time and the new champion is just a 2/1 shot to inflict another defeat on Joshua, who has drifted to 4/9 after opening up around 1/3.

The many questions, both mentally and physically, about both men ahead of the return make this such a fascinating contest, but also pose a very tricky puzzle for punters to solve and, like many, I have changed my mind about the outcome several times in recent weeks. A compelling case can be made for almost every possible outcome, not least another Ruiz stoppage win, and it's not hard to envisage the California resident repeating the trick in the Middle East. 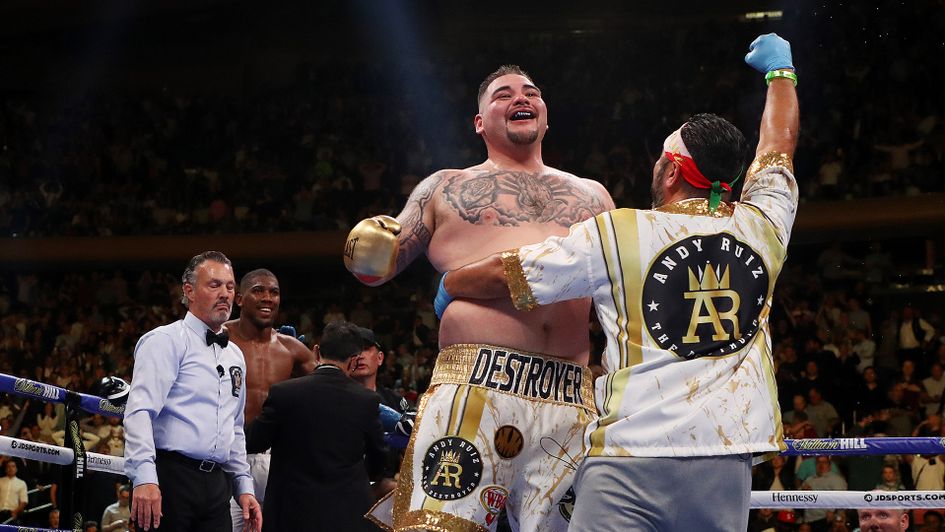 Andy Ruiz Jr stunned Anthony Joshua in New York in June - but can he do it again?

The first thing to get straight is that it was no fluke, or a 'lucky punch' as Joshua has claimed, when Ruiz shocked the boxing world at Madison Square Garden. His hand speed caused the Watford man problems every time the distance was closed and Ruiz is the much better fighter on the inside.

These factors were no more apparent than in the third round when, after being dropped, Ruiz remained ice cool under pressure as the champion went in for the finish and landed a left hook that rocked Joshua to his boots. Thereafter, he countered the Brit well with his quicker mitts and was able to land more cleanly every time they traded.

Ruiz commanded the centre of the ring from the off and relentlessly walked his man down, keeping small and compact to work his way in and let his fast flurries go. He showed an excellent chin, taking Joshua's best shots and even when he was put down, he wasn't badly hurt, so he has the confidence that he can stand up to what comes his way.

It could just be that Ruiz is all wrong for Joshua, who didn't look comfortable with the constant pressure and it may only be a matter of time before he is caught with one of those left hooks again. After all, it is the same shot that he was wobbled with by Dillian Whyte and Alexander Povetkin, and his ability to take a punch was in question long before he arrived in New York. All this makes the 11/4 about another Ruiz stoppage very tempting.

However, a strong argument can also be made for Joshua faring much better this time. While the various rumours about backstage bust-ups and poor preparation can be debated, it does seem highly likely that he may have slightly overlooked Ruiz, who did a great job of playing the nice guy and looking like a tourist just happy to be there in fight week. The late switch of opponent could have been an issue, as original foe Jarrell Miller offered a very different test to Ruiz before he failed a drugs test around six weeks out.

It's not as if Joshua didn't have success of his own six months ago, as he swept the first two rounds on the scorecards when boxing and moving well behind his jab, and he appeared in control when able to keep it long. The expected routine victory looked on the cards when flooring his man in the third, and it was only when he got careless, thinking Ruiz was ready to go, that he came into bother. Surely Team Joshua will be very aware of this and he will be well drilled to be much more cautious second time around.

"I'm still pinching myself to see if this is real!"

🥊🏆 Andy Ruiz Jr is still as shocked as anyone that he knocked Anthony Joshua down four times on his way to winning three of the four heavyweight world titles!pic.twitter.com/6J7Jv4QDb1

He also cuts a much leaner figure, which suggests he will be looking to box and be more mobile. If Joshua can make full use of his long jab, get his one-twos off and be on the move, then he could make this pretty comfortable for himself. It will require a lot discipline to not linger in the exchanges or get greedy with any of his success, but being a challenger for the first time in three and a half years should have him in the right mindset for the job.

This is the blueprint set by Joseph Parker, who was unwilling to engage when handing Ruiz his sole defeat as a professional via a tight points decision, and the New Zealander was subsequently beaten by AJ. Ironically, it was Joshua who successfully boxed behind his jab for the points win that night, in the only one of his bouts to go the distance, proving he has the discipline pull off these tactics.

Utilising his much longer jab, maintaining the distance and landing sporadic right hands may see Joshua slowly break down Ruiz for a late stoppage, with a post-halfway victory for the challenger very reasonable at 3/1. Given the rock-solid chin shown by the new champion, the 4/1 about a points success also looks a big player if the challenger adopts this approach.

Conventional wisdom in boxing is that a rematch usually goes the same way as the first fight, but history doesn't look favourably on Ruiz when it comes to heavyweight upset winners, with the likes of Buster Douglas (Mike Tyson) and Leon Spinks (Muhammed Ali) losing next time out after shock title wins.

Much has been made of the choice of venue but the politics of the location will have no bearing on the outcome of the fight, yet the time zone may. Saudi Arabia is 11 hours ahead of California and it could pose more of an inconvenience for Ruiz than Joshua, who has just a three-hour difference to contend with from his UK base.

Given how things worked out when they traded in June, I can only see a cautious approach from Joshua and it may well take a while for Ruiz to catch up with him as, for all his hands are rapid, the Mexican does have slow feet. This wasn't an issue last time as Joshua walked to him but he is likely to make him work a lot harder to get close on Saturday and this would mean we should see a few rounds.

With such uncertainty about who will come out on top, the rounds betting may indeed be the way to go and the line is over 7.5, which looks a solid bet at 10/11. It may well catch fire at some point, but that is unlikely to be early doors if Joshua has his way.

A smaller bet on Joshua to win back his belts via unanimous decision at 5/1 is also advised, with the likely gameplan making this outcome look a little overpriced. Providing he executes what is sure to be the plan, Joshua can get his career back on track. 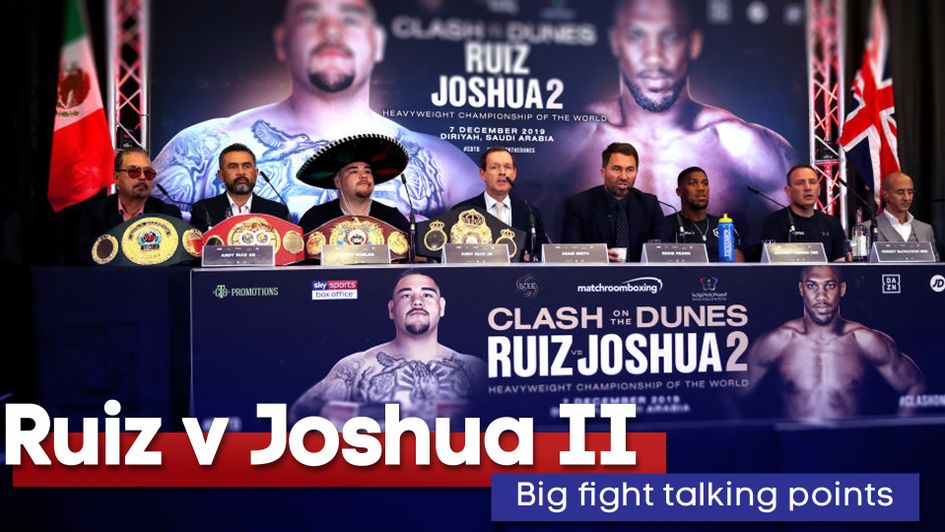 The undercard features three Joshua victims, including Dillian Whyte, who makes his first outing since he failed a UKAD (UK Anti-Doping) test before his bout with Oscar Rivas in July.

While the Brixton banger was cleared to fight and notched a good win against the tricky Colombian, that cloud still hangs over him and he will be glad to get back to boxing when he takes on 16/1 outsider Mariusz Wach here.

The lanky Pole (35-5) went the distance when challenging Wladimir Klitschko in 2012, but he is much easier to hit these days and the 39-year-old was stopped twice when losing three on the bounce in an 18-month period up to April this year.

Both those inside-the-distance defeats came in the second half of the fight and that looks the way to go in this 10-rounder, with Whyte fancied to gradually wear down the older man and force the referee's intervention somewhere after halfway.

It's a bill stacked with heavyweights and the aforementioned Povetkin looks to stay in title contention in an intriguing matchup with Michael Hunter.

The Russian returned from that seventh-round defeat to Joshua to outpoint Hughie Fury in August, confirming he still has plenty to offer at the age of 40. His only two defeats have come at the highest level in unified title tilts against Klitschko and Joshua.

Like his opponent, Hunter (18-1) has only lost to the very best, having dropped a decision to the brilliant Oleksandr Usyk at cruiserweight in 2017, and has rattled off six good wins since stepping up to heavyweight. However, he could probably still make cruiser if he wanted and that could be a factor in what is his toughest test yet in the glamour division.

With this in mind, I wouldn't be in a rush to take the 1/2 about the American maintaining his winning streak and Povetkin looks the value at 7/4, with a wealth of experience on his side and seemingly still enough left in the tank. 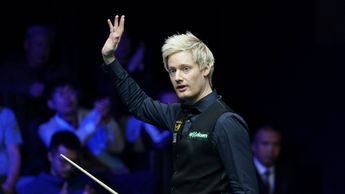 Neil Robertson has become the second player to whitewash his opponent in a two-session ranking event final after thrashing Zhou Yuelong 9-0 at the European Masters.

Neil Robertson has become the second player to whitewash his opponent in a two-session ranking event final after thrashing Zhou Yuelong 9-0 at the European Masters.