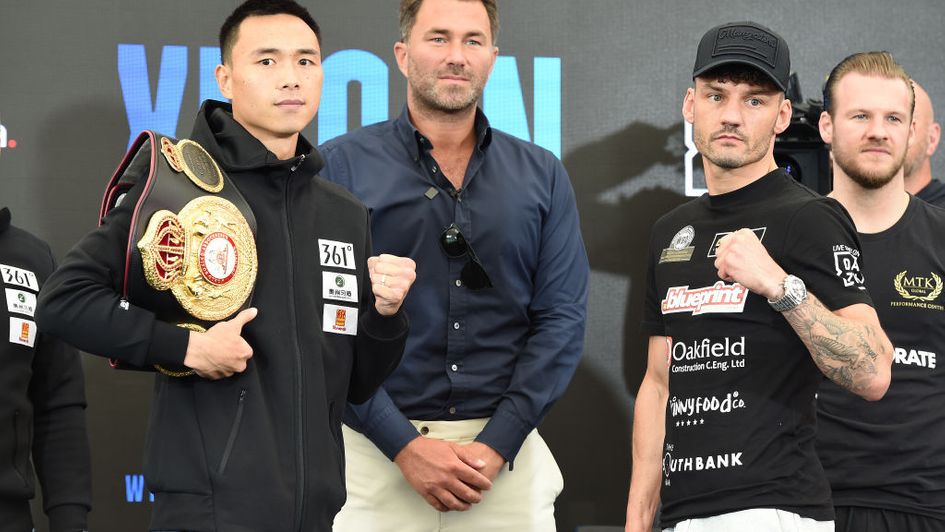 Can Xu (left) is fancied to win on points

A new era for British boxing begins this weekend as Eddie Hearn and Matchroom stage their first UK show on DAZN.

The promotional outfit ended their long and highly-successful partnership with Sky Sports earlier in the summer and this marks start of their new deal for UK content with the streaming platform.

A new dawn it may be, but it has a very familiar feel to it as we are back in Hearn's back garden for another series of Fight Camp following the success of last year's series of shows in the grounds of Matchroom HQ. The four-show series behind closed doors was a big hit and ended in dramatic fashion with Alexander Povetkin switching Dillian Whyte's lights off with one of the best shots of 2020. The 2021 version runs for just three weeks but they all feature some intriguing match-ups and there is the added bonus of crowds being allowed in this time.

The fans may be back but the reminder that we are still very much in Covid times came on Thursday afternoon when Conor Benn tested positive and was forced to withdraw from his bout with Adrian Granados. That was due to top the bill but, thankfully, it's a deep card and we still have a world title contest to the headline the night, as Leigh Wood gets a surprise shot at CAN XU's WBA 'regular' featherweight belt.

This isn't the opponent the Chinese champion expected on his UK debut, having previously been lined up for a unification bout with Josh Warrington, but Wood has presumably been brought to give fans on these shores a taster of Xu in the hope that Warrington wins back his belt against Mauricio Lara in September before they finally get it on.

After 10 years as a professional, this is Wood's (24-2) reward for bouncing back from a narrow points defeat to 'Jazza' Dickens with an impressive ninth-round stoppage of the previously unbeaten Reece Mould in February. However, it is a notable step up in class and has come at relatively short notice, so odds of 11/4 about the Nottingham man look fair enough.

Xu lost two of his first five but is now on a 15-fight winning streak over seven years and arrives on the back of a one-sided points win over Manny Robles III, who was unbeaten in 18 prior to that defeat. That November 2019 outing in the US, along with when he won the belt earlier in that year, shows he has no problem with travelling and also highlighted his phenomenal output. The champion threw over 1500 punches against Robles and is fancied to out-work Wood here to defend his belt for the third time.

The 2/7 favourite is 5'9" but rarely looks to use his length as he constantly ploughs forward throwing hooks and uppercuts aplenty. Understandably, given these tactics, he can be caught and Wood carries a fair dig on him so is by no means out of it, but he could find it hard to keep up with the pace set by the visitor. With only three stoppages from 18 wins, Xu is likely going to need the judges again and another DECISION VICTORY for the champion rates a solid bet at 5/4.

There has been some real needle between CHRIS BILLAM-SMITH and Tommy McCarthy and their cruiserweight clash is the one many are looking forward to most, myself included.

The back and forth between the pair has added further spice to an already tasty contest and, with Billam-Smith's Commonwealth belt and McCarthy's European strap on the line along with the vacant British title, it has all the right ingredients.

Both are 30 years old and arrive with plenty of momentum, with the winner likely to be pushing for a world title shot in the near future. Billam-Smith comes into it as the 1/3 favourite with only one reverse in 13 outings, and he lost nothing in defeat to Richard Riakporhe two years ago as he dropped a razor-thin split decision to the unbeaten Londoner. Three wins have followed, including despatching of Nathan Thorley in a couple of rounds at this venue last summer, and a good workout against Vasil Ducar (UD 10) in March was good preparation for his biggest fight to date.

McCarthy also had a good warm up when stopping Alexandru Jur in the sixth in May and will be full of confidence. However, he also lost to Riakporhe in 2019, just four months before Billam-Smith, and was stopped in only four rounds, which is part of the reason he is as big as 5/2 here. That was his second loss from 15 outings and things weren't going to plan, having turned professional with a big reputation in 2014. He has been a bit of a slow burner, though, and got back on track when going to Italy to outpoint the previously unbeaten local Fabio Turchi in late 2019 before two good wins during the pandemic. He is in the form of his life as he bids for a sixth straight win.

This could easily go one of two ways. Both can bang and aren't shy of letting the bombs go, so, given the fiery build-up, they may get right down to it and have a tear-up from the get-go. On the other hand, they can also box well and with so much at stake, a cagey affair is very possible. They look well matched and no outcome would surprise, but the value may lie with backing this to go longer than the layers suggest and siding with BILLAM-SMITH BY DECISION at 3/1.

Big and strong for the weight, he is a real handful and looks very much the part when allowed to get his shots off on the front foot. He has made good strides forward under the tutelage of Shane McGuigan and boasts an excellent jab, which he mixes up well to body and head, as well applying effective feints. That jab could prove the key to this one if it turns into a bit of a chess match, with neither man willing to take too many risks.

The worry for favourite backers would be that he can be a bit upright and leave his chin out to dry when too eager to land his own shots, something which McCarthy could well exploit with his excellent lead left hook. Billam-Smith has, so far, shown he can take a good shot and he is the busier of the two, which can sway the judges if their cards are required.

AVNI YILDIRIM versus Jack Cullen is a tricky puzzle for punters to solve with so many question marks over the two men.

For Yildirim it is a question of belief, as he was last seen on the wrong end of one of the biggest mismatches in recent world title history when failing to come out for the fourth round against Saul 'Canelo' Alvarez in February. There is certainly no shame in losing to the best fighter on the planet right now, but the Turk barely threw - never mind landed - a punch in the three completed rounds and then clearly didn't fancy seeing a fourth after being dropped in the third session.

The concern for Cullen is whether he is ready for this step up in class or not. He caused a big upset when outpointing the highly-regarded John Docherty over 10 rounds at Wembley in November, but prior to that was lucky to escape with a split draw against Zak Chelli in Fight Camp 2020 and was stopped by the promising Felix Cash inside eight rounds in late 2019.

A tough one to price up, Cullen is around the 4/7 mark to inflict a fourth defeat on Yildirim, who was also stopped by Chris Eubank Jr in three rounds. However, he lost out on a technical decision to Anthony Dirrell when challenging for the vacant WBC super middleweight belt before the Canelo bout and has mixed in much better company than Cullen. While he may not be world class, he should still be very effective at this lower level and the 13/8 underdog could be worth chancing to make the most of the big drop in class.

Cullen is tall for the weight at 6'3 with long arms, but he doesn't fight tall and the stocky, powerful visitor shouldn't have any problem getting up close to land his heavy blows. There is every chance this will quickly turn into a trade-off and the more experienced Yildirim looks too big at 11/4 to claim a victory INSIDE THE DISTANCE.