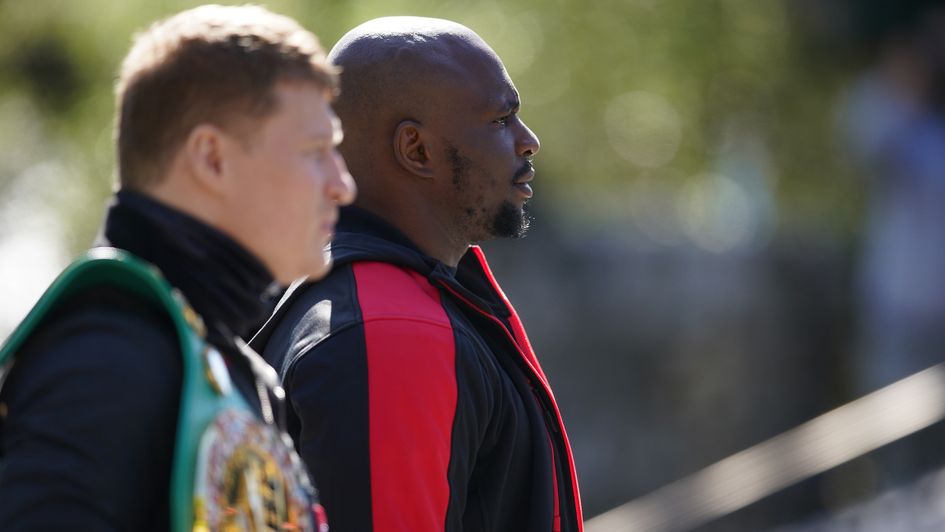 Gibraltar isn't known for its big sporting events but all eyes are on 'The Rock' this weekend as Dillian Whyte and Alexander Povetkin finally get it on again in their highly-anticipated pay-per-view rematch.

The British overseas territory is famous for its simian population so it seems a fitting place for Whyte's attempt to get the monkey of the stunning knockout loss to Povetkin last summer off his back.

After over 1,000 days as mandatory challenger for the WBC belt, the Brixton man's hopes of an overdue title shot went up in smoke as he was sparked out by a left uppercut in the fifth round that went down as the best punch of 2020. Gervonta Davis may have something to say about that, but his sublime one-shot knockout of Leo Santa Cruz didn't carry the same shock value as that of Povetkin, who had been down twice in the previous round and seemed certain to be on his way out.

Whyte was controlling all aspects of the fight up until that point, using his jab well and coming off best when they exchanged up close, and just as when a career-best win looked imminent, he was rendered unconscious in the blink of an eye. It was a reminder of why the heavyweights are so popular and it leaves us with an even more intriguing rematch, one which we know could end at any second

Despite being stopped last time, Whyte retains strong favouritism at a top price of 3/10 and it is not often you can get 3/1 about the victor repeating the dose in an immediate rematch.

Prior to the first encounter, I believed Povetkin was beginning to really show the signs of a long career (both amateur and professional) and that his once rock-solid chin was beginning to crack. The events in Essex last summer only strengthened that belief, as the shots that put him down twice were hardly the cleanest and there didn't appear to be much left in his legs at the end of that fourth.

That came on the back of his controversial draw with Michael Hunter, who isn't the biggest puncher at heavyweight and rocked the Russian to his boots on several occasions, while the seventh-round knockout at the hands of Anthony Joshua in 2018 may also have weakened Povetkin's durability. 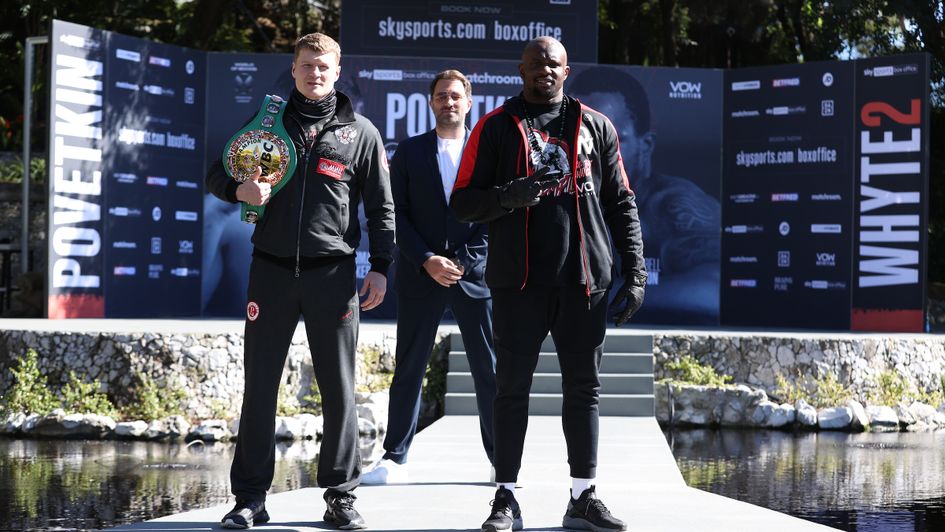 Whyte is taken to exact revenge on Saturday night

However, they say the last thing a fighter loses is his power and he proved that to be true when detonating a bomb on Whyte's chin. Was it a case of the latter switching off or a piece of brilliance from Povetkin? Possibly a bit of both. Dipping to his left and coming back with a big hook or uppercut has always been a trademark of Povetkin's attacks and Whyte should have been wary of that, but the way the Russian found room for the shot up the middle was pure class and highlighted his technical ability.

The notable news since the first fight appears to be in Whyte's favour. The original rematch date in November was scuppered due to Povetkin contracting Covid-19 and reportedly spending time in hospital, so there have to be doubts about his preparation and two more dates were scrapped before the return landed on this Saturday. It should also be noted Team Whyte have recruited Harold Knight, who knows a thing or two about masterminding big heavyweight rematch wins as he was part of the camp when Lennox Lewis avenged his two defeats to Oliver McCall and Hasim Rahman.

Those perceived advantages for Whyte may be negated by the PTSD of the brutal knockout and the mental hangover that may have been incurred, especially going straight back in with his conqueror. It is for that reason we could see a more cautious approach from the 'Body Snatcher' this time around and he may opt to make more use of his advantage in reach, rather than his extra size and weight.

Whyte utilized his longer levers to consistently land with the jab and control the distance against the dangerous Oscar Rivas in 2019, so is capable of successfully adopting a similar approach here and that may be the most likely scenario if he's wary of Povetkin's power. Like in the first encounter, the Londoner can do damage when following the jab with his thudding overhand right but he may look to soften up and slow down the underdog before letting it go too often.

Another reason the favourite may be happy to take few risks early doors is the once solid engine of Povetkin now has plenty of miles on the clock and it has begun to show in recent outings, as he chooses to fight in spurts more these days, and his best chance is clearly in the first half of the contest. The younger and fresher Whyte does the 12 rounds well and there have to be concerns over whether the 41-year-old veteran will be able to keep up the pace as the fight goes on.

A former Olympic gold medallist, Povetkin remains the technically superior of the two and is still very capable of creating the openings required to repeat what we saw last summer, so Whyte will need to be on his 'A' game defensively from the first bell to the last. Povetkin can be backed at around the same price for a stoppage as he can just to win, which tells you plenty about his chances of getting a decision here and he will be going all out to take it out of the hands of the judges again.

As dangerous and respected as Povetkin is, I can't shake off the memory of him being floored with relative ease seven months ago and it's hard to side with him following his subsequent battle with coronavirus, however serious that may or may not have been.

The expected safety-first approach from Whyte brings the possibility of him picking up a decision (4/1) into play, but he can make a real dent in the Russian again once he starts to let the bigger shots go more regularly and that may not be until around the middle rounds. The veteran is expected to struggle to stand up the heavy fire at this stage of his career and Whyte is taken to get the stoppage in the second half of the fight.

A WIN FOR WHYTE IN ROUNDS 7-12 is available at 9/4 with Sky Bet and looks the way to go ahead of this fascinating second instalment.

Best bets on the undercard

Ted Cheeseman was one of the stars of Fight Camp in August and he bids to regain the British super welterweight title against JAMES METCALF in what should be a lively affair.

After two losses and a draw, 'The Big Cheese' got back to winning ways with a thrilling points victory over Sam Eggington and another victory here would get his career back on track to where he was before that disastrous 2019. Having been very open about his gambling problems out of the ring, he rolls the dice inside it here against the unbeaten Metcalf, who edges favouritism at 8/13.

Son of popular welterweight Shea Neary, the Liverpudlian boasts a perfect 21-fight record and was beginning to deliver on his potential before the pandemic hit. The tough Jason Welborn had fought for world title in America in his fight prior to taking on Metcalf in June 2019 and the latter broke him down for an eighth-round stoppage, a feat made all the more impressive considering he did it with one hand. He has only had 32 seconds of action since that win, but that may not be the negative it first seems, with the 13 months out of the ring giving his troubled right hand the chance to fully heal.

Both men are super fit and throw plenty of leather, so this has all the ingredients to be yet another exciting Cheeseman bout, but it is those wars already under his belt that concern me about the Bermondsey man. As exciting as he is to watch, he has taken plenty of punishment already for a 25-year-old and he has had his limitations exposed on more than one occasion. His more recent activity is in his favour, but that became yet another gruelling night after he dominated early and the manner in which Eggington, who had been badly hurt, came back into the fight in the second half is a worry.

As highlighted by Eggington and Sergio Garcia in 2019, the aggressive Cheeseman can struggle when faced with a good jab and good footwork, and that is exactly what he is up against with Metcalf. The 32-year-old moved very well and constantly pumped out his lead left hand in that career-best victory over Welborn, who was ultimately stopped by a body shot, and Metcalf goes downstairs to good effect.

Cheeseman has mixed in better company and will present the toughest test of Metcalf's career to date, but the favourite looks to have all the tools to pass the assessment with flying colours. He will do well to get rid of the well-conditioned Cheeseman, who has shown a granite chin to date, so it looks likely Metcalf that will have to do it via the scorecards and there is plenty of juice in the 9/5 available about the Scouser landing a DECISION VICTORY.

There could be better luck for the other Bermondsey fighter on the card, as CHRIS KONGO is fancied to get the better of Michael McKinson in their welterweight clash.

This should be an interesting clash of styles as the well-schooled Kongo pits his sound fundamental skills against the unorthodox McKinson, a tricky southpaw counter puncher who does little by the textbook.

Both are unbeaten, but Kongo enters as a 2/5 favourite as he sets the form standard with his ninth-round stoppage of Luther Clay in Fight Camp last time. The former accomplished amateur should be full of confidence following that breakout victory and, making the most of his six-foot frame, he can keep this long to box his way to a 10-ROUND DECISION at 7/5.