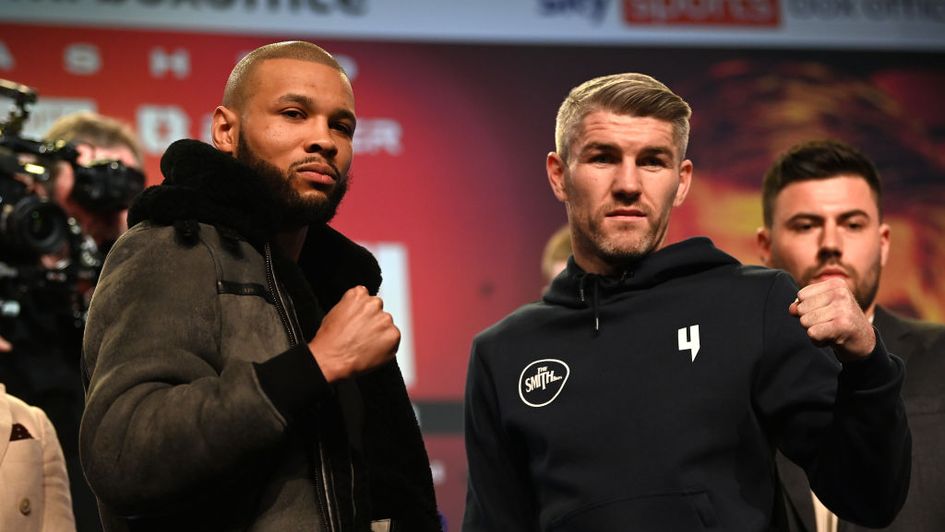 Chris Oliver brings you his first preview of the year as Chris Eubank Jr and Liam Smith go toe-to-toe on Manchester, live on Sky Box Office.

The British boxing year kicks off with a cracker on Saturday night as Chris Eubank Jr versus LIAM SMITH provides a fascinating top of the bill on a good card at the Manchester Arena.

There are no phoney belts on the line here, just two domestic rivals who are known to bring excitement and have the motivation that comes with knowing they can’t afford a loss at this late stage of their career.

Adding to the intrigue is their polar opposite characteristics, both in and out of the ring. In Smith, you have the blue-collar hero who prefers to do his talking in the ring, with his no frills and rugged approach. Conversely, Eubank revels in the pre-fight verbal battle and is a natural showman who likes to be as flashy inside the ropes as some of his outfits.

Eubank has become accustomed to playing the ‘bad guy’ role, but his popularity went through the roof on the back of his blockbuster with Conor Benn falling out of bed when the latter failed a drugs test. With Benn now the villain, social media lapped it up when Eubank still boiled himself down to the contracted weight limit of 157lb and he gained plenty of good PR as a result.

Eubank is the star in this middleweight clash and he's the reason this has ended up on Sky Box Office, but his celebrity status and razor-sharp one-liners shouldn’t be confused with what really matters – his achievements as a boxer.

Eubank may be world-class in the art of trash talking, but he has yet to win a recognised world title. It is Smith who has held world honours, winning and twice defending the WBO light middleweight strap in 2015/16. That was at 154lb, though, which is one of the reasons why Eubank, a career middleweight and super middleweight, is a warm 2/5 favourite (as short as 2/7) to defeat the smaller Smith, who has drifted to 12/5 this week.

At 33 and 34 respectively, Eubank (32-2) and Smith (32-3-1) are at similar stages of their careers and boast almost identical records, with both only losing to world-class operators and giving a good account of themselves on each occasion.

Eubank lost his unbeaten record to Billy Joe Saunders in late 2014, when his late rally wasn’t enough to claw back the deficit on the scorecards, and he was also outpointed by George Groves up at super middleweight in 2018 at this same arena.

Smith should also have only two losses on his record, as he was the victim of a blatant ‘hometown' decision when traveling to Russia to face the unbeaten Magomed Kurbanov in 2021. Prior to that, there was no disgrace in his ninth-round stoppage to the brilliant Saul ‘Canelo’ Alvarez in front of 50,000 fans in Texas, while the Liverpudlian more than played his part in a thrilling tear-up when dropping a decision to Jaime Mungia, who is still unbeaten after 41 fights.

Since that latter 2018 defeat in Las Vegas, Smith has been on a fine run of form under new coach Joe McNally and recorded arguably a career-best win when stopping former world champion Jessie Vargas last year, although the American had done all his best work down at welterweight.

Eubank has also teamed up with a new coach recently in the shape of legendary former champion Roy Jones Jr, but the jury is still out on how effective that partnership is. He seemed a little stuck between his fighting instincts and a new-found boxing style in his first two fights with Jones against Marcus Morrison (UD) and Wanik Awdijan (TKO 5), before registering a wide decision victory over Liam Williams in a heated domestic contest 11 months ago.

As easy as that latest win was on the scorecards, it provided as many questions as answers and kind of summed up Eubank’s career to date. He looked sharper than ever as he dropped Williams three times in the first four rounds and looked set to make a real statement, before taking his foot off the gas for the next six rounds and letting the Welshman back into it. Eubank did finish strongly to drop his man in the 11th session and close the show.

That highlighted the fast hands and good timing of Eubank, but also his tendency to want a breather and Smith won't afford him that luxury. Nor will the underdog freeze on the big occasion, like Williams appeared to that night, and he won't be rattled by the fierce exchanging of insults that has really ramped up during fight week.

Many have pointed out that Eubank has only lost to men with excellent jabs who are tricky to find thanks to their fleet of foot, and that isn't what Smith brings to the party. He does, however, bring a massive engine and a relentless attack, which will be crucial if he is to win this grudge match.

Smith is more than just than just a basic, tough nut who walks forward with his hands held high and wings away when in range. He has a much better boxing brain than many give him credit for, as evidenced by his comfortable points victory when beating the aforementioned Williams for the second time in 2017. Smith uses feints very well, has underrated footwork and can counter effectively over a lazy jab – something Eubank can be guilty of throwing.

Smith to stay the course

Eubank is naturally blessed with great athleticism and the ability to put his punches together beautifully when someone stands in front of him. So, with Smith not being the most elusive and often starting slowly, it's easy to envisage the quicks mitts of Eubank picking off the oncoming underdog early doors. In fact, you would expect the favourite to open an advantage on the cards.

However, things could get very interesting should we reach the halfway mark. If Eubank hasn't made a serious dent Smith in by that point. then the latter's pressure and high work rate could really start to have an effect on his opponent. Even in losing the early rounds, Smith can make Eubank work harder than he wants to and that could pay dividends down the stretch, when Eubank seeks a breather but will instead be forced to fight.

Both men are noted for their durability and good chins, so there is a strong chance we will see the full 12 rounds and that is backed up by odds of 1/2 for it to go the distance. Eubank to win on points is the clear favourite in method of victory market and is clearly a big runner.

Common opinion is that Eubank will just prove too big and strong for the smaller Smith, who could be sufficiently deterred by the sharp-shooting of his quicker opponent for him to get a foothold in the fight. As plausible as that is, it may be doing a disservice to just how tough Smith is.

There are a couple more factors that temper enthusiasm about taking short odds about Eubank. Firstly, it may have gained plenty of 'likes' on social media, but Eubank making 157lb for the first time at 33 could have left its mark and his massively depleted frame showed how hard it must have been for him to get there.

In summary, I see Eubank shining early doors but if he doesn't get rid of his man in that period, he could be given hell down the stretch by the relentless Smith, who will get stronger as the fight goes on. There could be plenty of debate about the winner at the final bell and while Eubank could easily get the nod, the 9/2 about SMITH WINNING A DECISION rates the much better value.

Eubank is brilliant when given space to work but he may not get that here and having to fight three minutes of every round could see his output notably drop after halfway, when Smith will be at his best.

On the undercard, RICHARD RIAKPORHE is hurtling towards a cruiserweight title shot and he puts his growing reputation on the line against former champion Krzysztof Glowacki.

Riakporhe continued his progress in in 2022 with good wins over Deion Jumah (KO 8) and Fabio Turchi (TKO 2) and the Londoner is quickly becoming a serious problem in the 200lb division, hence his odds of 1/9.

Glowacki has seen it all in his 35-fight career, with his three defeats coming only in world title fights against top opposition, and the wily southpaw can give the favourite something to think about. However, now 36, the Pole has seen better days and may not hear the final bell against the imposing 6'5" figure in the opposite corner.

Glowacki struggled with the big frame of Lawrence Okolie when stopped in six rounds on these shores in 2021 and it's 1/4 that he is halted for the third time in his career now, with a best price of 5/6 about that being in the first six rounds. However, a much more tempting price is RIAKPORHE TO WIN IN THE SECOND SECOND HALF of the fight, as the visitor certainly has the experience to keep out of harm's way and take this a few rounds.

British and Commonwealth title fights rarely disappoint and EKOW ESSUMAN (10/11) against Chris Kongo (11/10) should be no exception.

The former won the welterweight straps when stopping Chris Jenkins in 2021 and has impressed in beating Danny Ball (KO 6), Darren Tetley (UD) and Samuel Antwi (UD) since, while Kongo has rebounded from his sole loss to Michael McKinson with a couple of pleasing points victories.

Neither man is known for stopping opponents and while the bookies are struggling to split them, the unbeaten champion is on a real roll and is fancied to pick up another DECISION at 13/8.