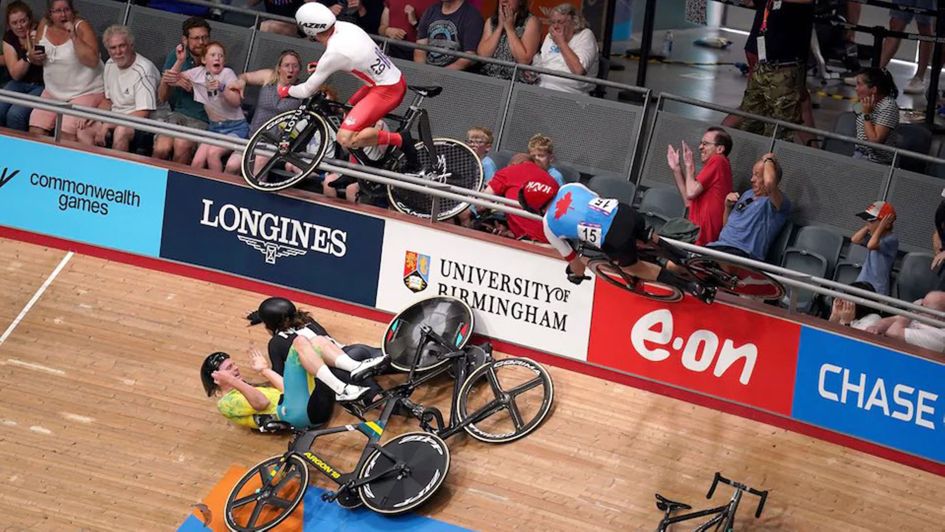 England’s Matt Walls ends up in the crowd

England’s Matt Walls was involved in a terrifying accident at the Commonwealth Games on Sunday morning when he was catapulted over the barriers and into the crowds at the Lee Valley VeloPark.

The 24-year-old Olympic omnium champion received treatment for more than 40 minutes before being taken away by ambulance, with spectators also hurt after he and his bike had come over the top of the barriers on the high banking of the corner.

Team England said in an update: “Matt is alert and talking – as he has been throughout – and is being given medical attention in hospital.”

Two other riders – the Isle of Man’s Matt Bostock and Canada’s Derek Gee – were also taken to hospital, while two spectators were treated for minor injuries at the velodrome.

Bostock had a CT scan from which the initial prognosis was said to be positive. The 25-year-old was being assessed to check he had no other serious injuries.

A statement from Team Isle of Man said: “Team Isle of Man wishes to extend its best wishes to the other cyclists involved in the incident, in particular Matt Walls, and to the spectators who were injured and affected by the crash.”

Witnesses said that, because of the gradient of the banking, spectators in the front row had been unsighted for the crash. One man received treatment for cuts to his arm while a young girl also received minor attention.

Walls had been trying to avoid riders who had fallen in an incident that began on the entrance to the corner. The stricken pair of New Zealander George Jackson and Australia’s Josh Duffy were sliding up the banking, forcing Walls up on to the barrier and then over it.

Gee also surfed the top of the barrier but managed to avoid following Walls into the stands, albeit then falling heavily once back on the banking.

In a statement, a Birmingham 2022 spokesperson said: “Following a crash at the morning session of track and para track cycling at the Lee Valley VeloPark, three cyclists and two spectators have been treated by the onsite medical team.

“The three cyclists have been taken to hospital. The two spectators did not require hospital treatment…

“We would like to send our best wishes to the cyclists and spectators involved in this incident and to thank the medical team for their swift action.”

Canadian Mathias Guillemette was disqualified from the race for causing the initial crash.

The remainder of the morning session at the velodrome was cancelled and spectators were asked to leave as medical staff attended to Walls.