Tammy Abraham scored four as Aston Villa and Nottingham Forest drew 5-5 in an astonishing Sky Bet Championship clash on Wednesday. We have all the details from a dramatic night.

Forest, though, deserved a point from the 10-goal thriller to take them into the top six after a spectacular display of attacking football.

To their credit Forest were always on the front foot and set the tone of the game with goals from Lewis Grabban and Jose Carvalho in the opening six minutes.

Villa were equally emphatic with Abraham scoring twice in three minutes to level the scoreline after only 14 minutes.

With both defences caught napping, Matt Cash regained a 22nd-minute lead for Forest only for Abraham to slot away a 36th-minute penalty to complete his hat-trick.

The goal of the game came in the 51st minute from Joe Lolley with a superb shot from 35 yards that spectacularly whistled into the net.

Forest could not retain their advantage as Abraham notched his fourth after 71 minutes before substitute Anwar El Ghazi grabbed a fifth goal for Villa, which was then cancelled out by Grabban eight minutes from time.

Gary Rowett was able to celebrate victory against his former club as goals from Sam Clucas and Tom Ince earned 10-man Stoke a 2-1 win over local rivals Derby in an ill-tempered Championship clash at the bet365 Stadium.

Midfielder Clucas opened the scoring midway through the first-half for Stoke, who had Peter Etebo sent off before the break for a challenge on Richard Keogh.

Frank Lampard's visitors were level five minutes following on from the restart when Harry Wilson struck a curled free-kick.

Clucas then turned provider for the Potters winner, crossing for former Derby man Ince to finish from inside the penalty area with 25 minutes to play, which earned three points for boss Rowett against the club he left in May.

Scroll down for more

Baggies up to fourth

West Brom continued their upturn in form with a 2-1 win at Swansea that took them to fourth place in the Sky Bet Championship.

Oli McBurnie's early effort had given Swansea the lead, but the Baggies were ahead by half-time and Darren Moore's side showed their pedigree to see out the game in comfortable fashion. 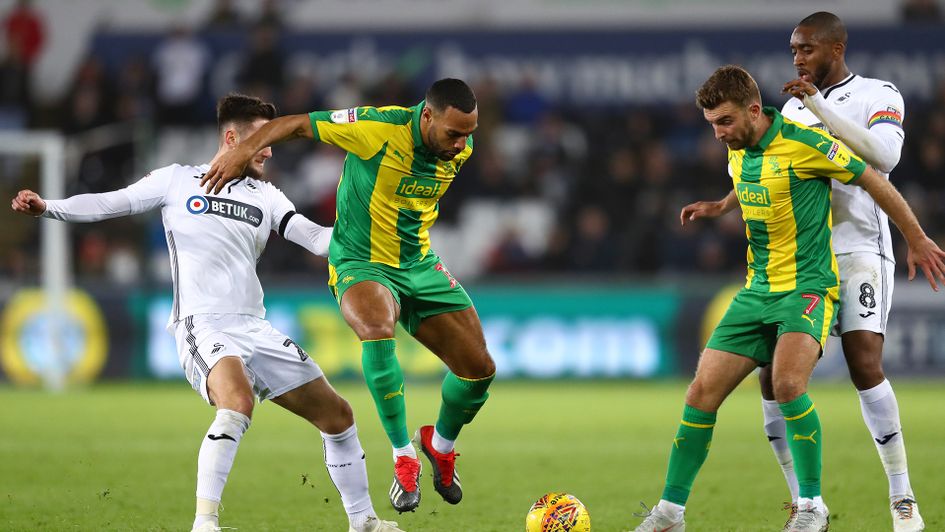 Wigan picked up a first Sky Bet Championship win in 10 attempts with a deserved 3-1 Lancashire derby victory over Blackburn at the DW Stadium.

Blackburn boss Tony Mowbray made four changes from the side thrashed 4-1 by Preston last time out but Rovers offered little until Dan Burn's own goal gave them hope seven minutes from time.

However, Wigan quickly restored their two-goal advantage through substitute Callum McManaman as Blackburn suffered a second derby defeat of the week.

Bristol City halted their four-match losing run in the Sky Bet Championship with a come-from-behind 3-2 victory against struggling Ipswich.

Freddie Sears had twice put Ipswich ahead but a Bartosz Bialkowski own goal and Jamie Paterson's strike brought the visitors level before Famara Diedhiou headed in a 64th-minute winner.

Sears had opened the scoring in the 32nd minute but the other four goals all came in a nine-minute period in the second half as Ipswich were left six points adrift of safety.