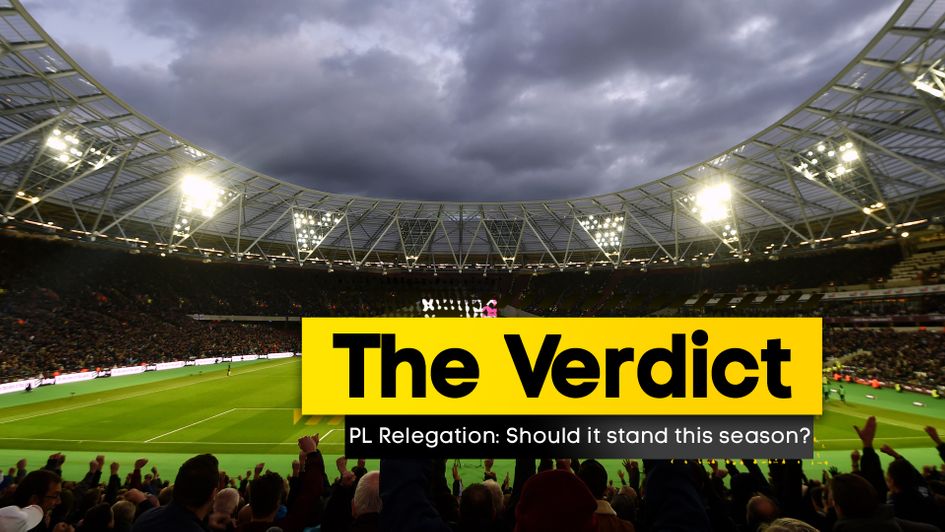 The Verdict: Our football team discuss the prospect of no teams being relegated from the Premier League

With the Premier League increasingly confident of returning to action in mid-June, with fixtures possibly played at empty, neutral venues, it remains a possibility that relegation will be removed from the equation. Our team give their views on what should happen if and when the season is completed.

And here’s a reminder of how the bottom of the table looks... 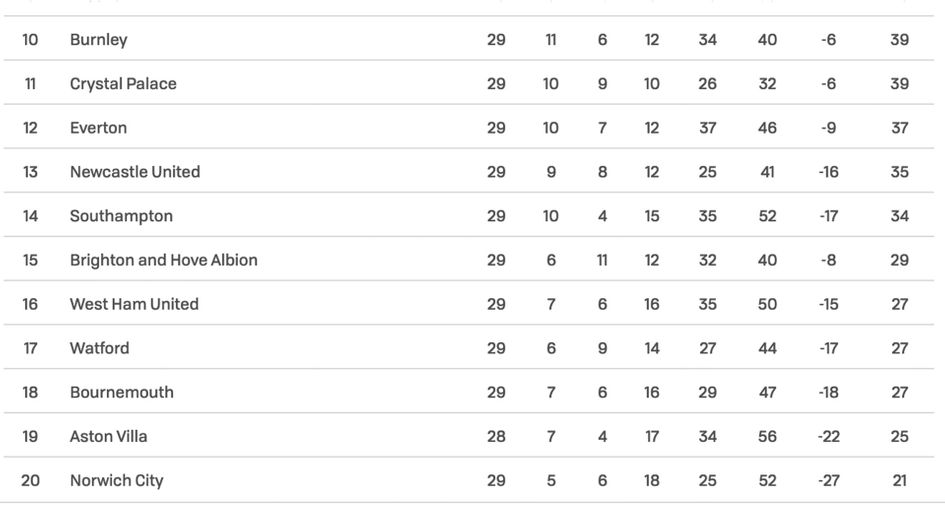 The Premier League table after 29 games

Every team has played 29 games except for Arsenal, Man City, Sheffield United and Aston Villa. It’s sometimes good to remind ourselves how things stand with nine games remaining.

Now we can all argue about the strength and weaknesses of the relevant teams but anyone who has watched the vast majority of games would have to agree that the table above pretty much reflects exactly what we have seen this season. In this instance the table doesn’t lie.

The teams at the bottom are simply the weakest in the division. From Brighton in 15th down to Norwich at the bottom we have the six worst teams.

Norwich simply haven’t been good enough (how did they beat City at the start of the campaign?) and Villa have conceded 56 goals, so even with Jack Grealish in good form that’s relegation fodder.

Bournemouth have had to cope with an unusual amount of injuries but have at no time, even with a fit team, come anywhere close to their previous attempts at top flight survival. Four wins in 14 at the Vitality Stadium tells its own story.

Watford did not start their season until December when Nigel Pearson arrived and Troy Deeney returned to fitness. Home wins since to Manchester United, Wolves and even Liverpool tell us that they will have enough to stay up.

West Ham have been a shambles on the pitch and as usual the back room problems have not gone away. David Moyes has added some bite to the team but nobody can argue they don’t deserve to be at the bottom.

Brighton have been the league's draw specialists, struggling to find a regular striker who can replace the ageing Glenn Murray. They are at the bottom on merit. Once again, four wins in 14 at the Amex is why they are threatened with the drop.

Before a ball was kicked, Newcastle were favourites with Villa and Norwich to go down. Fair play to Steve Bruce and his team, they have shown a real fighting spirit. Only three defeats in 14 home games is why they are hanging onto the hope of survival.

Now if I was the CEO of any Premier League team at the bottom, I’d be shouting from the rooftops how relegation was unfair no matter if the remaining games were completed. I’d be getting my lawyers involved. I’d try and get a consensus between my club and the others under threat. Maybe even tell the media my key players are unlikely to return to training through anxiety and stress. It’s the job of people who work at a club to defend it in any way they can. And that’s exactly what they’ve done.

For example, it was absolutely no surprise that Karren Brady (West Ham vice chairman) announced the league should be abandoned a few days after the suspension in March. The most self serving comment you’ll ever hear. I hate and despise it but at the same time understand it.

Now these clubs can scream, shout, cry, moan, whinge and stamp their proverbial feet - the Premier League need to simply tell them to do one. No. Get lost.

The league will be completed in empty, neutral stadiums starting mid-June and teams in the bottom three after 38 games will be relegated and replaced by the three teams who are promoted form the Sky Bet Championship.

That was simple wasn’t it.

When there were theories floating around about how the Premier League season might be resolved, with the suggestion that for one campaign only, next term could potentially involve more than 20 teams in an effort to avoid potential law suits, everything was getting very convoluted.

I mean this as no disrespect to Bury, what happened to that football club remains both a travesty and a disgrace, but from a decision-making perspective the English Football League must have been at least slightly relieved that they were going to be a club short next term.

It allowed them to end the Sky Bet League Two season and potentially give the division a reprieve from relegation.

The only circumstances in which I would back the Premier League handing out a similar reprieve would be if 'Project Restart' was pretty much a total failure, insomuch as we barely get any closer to completing the outstanding fixtures.

With every team having at least nine games left to play, I completely understand the clubs currently occupying the bottom three places being unable to countenance the prospect of a relegation based on their points tally from a 75% completed season.

How often have we seen teams drop like a stone in the final 10 matches and go down? For this season, I give you Brighton. One league win in 14 games, two in 18.

Or the contrary, great escapes like Leicester in 2015, Sunderland the year before and West Brom in 2005? Who's to say bottom club Norwich couldn't follow suit. 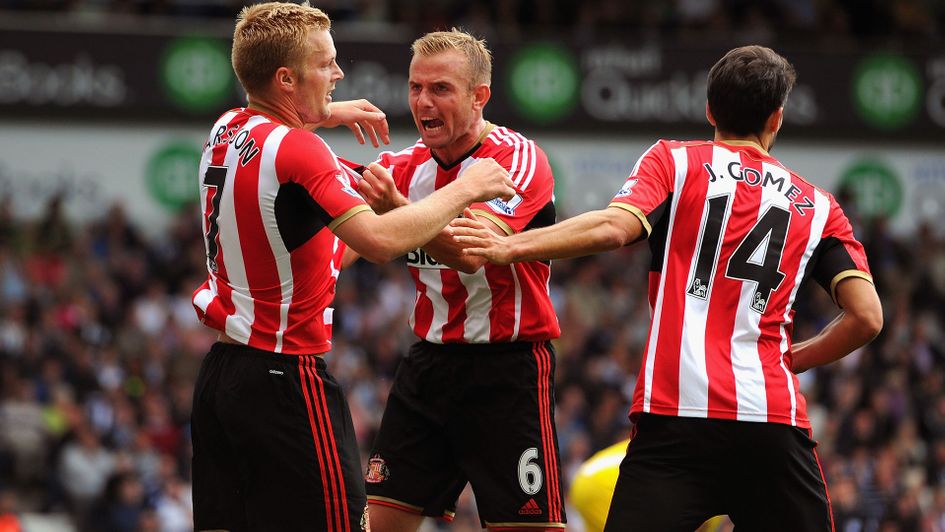 The circumstances in which we find ourselves however, require a line to be drawn somewhere. Should, let's say, 90% of all Premier League fixtures be fulfilled, relegation should happen.

Quite frankly I find it astonishing that there isn't something already like that in both the Premier League's and EFL's rulebooks, because for all the talk of unprecedented, it's not quite true is it.

During wartime, seasons were abandoned and decisions had to be made. More recently in both the USA and Australia whole campaigns in others sports have stopped and never started again because of players going on strike over pay. But I digress. We are where we are.

Whether in neutral, empty or full stadiums, if the season is completed in its entirety then relegation has to happen to maintain the integrity of the league.

If every team plays 35 matches that takes us beyond the 90% threshold. Even 34 has you a just fraction below. In my opinion, that is where the line should be drawn.

There would be relegated teams that feel that unfair, unless of course the bottom three are all 10 points adrift of safety, because of how the fixture list had played out.

But there is no perfect scenario at the moment, for anything.

Football is no different.

It has always felt distasteful that clubs are fighting tooth and nail to be able to preserve their Premier League status due to this whole thing being - and I'll use the buzzword - so unprecedented, but with the money involved and seeing their side of the story you can understand it.

It was interesting to see Norwich sporting director Stuart Webber on Sky Sports' Football Show a couple of weeks back and he gave a very honest and reasonable assessment of it - read his comments here.

He said how it would not be fair if they got relegated and replaced by Championship clubs whose season was decided on points per game rather than on merit, so thankfully the EFL's top tier is looking likely to resume.

But the teams complaining about not being able to play home games - especially when the ones saying it have quite poor records in front of their own fans - should be happy to do their talking on any pitch given the situation. 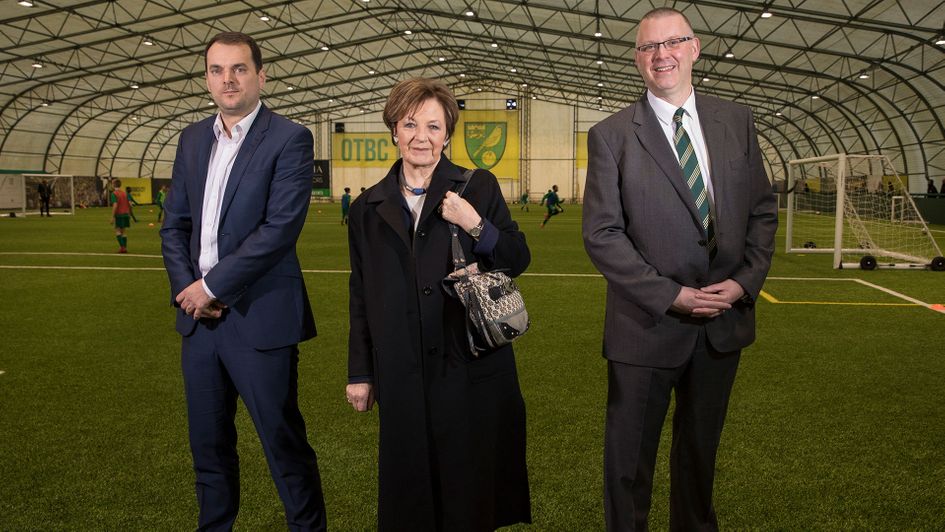 I have always been against curtailing the season and all for finishing it when safe to do so, but it needs to remain with relegation and all integrity. If not, then there's not a great deal to play for.

No-one wants an asterisk next to their name and they have to accept a global pandemic is always going to make things difficult - and they need to adapt and assist where possible.

The table does not lie and over the course of the season, the bottom three have been the worst performers. Luck with injuries has played a part, but the different conditions in every season is what makes the game great. If a player refuses to play due to safety fears, that's another case and unfortunate, but understandable.

It is a squad game though and if we were to wait for everyone to be ready and happy, we would be waiting a very, very long time.

It is looking promising that they will be able to play out the campaign and they can blame the disruption and empty grounds all they like, the fact of the matter is they have not been good enough over 38 games and the top performers in the Sky Bet Championship, who have been gearing towards their top-flight charge, deserve to take their place.

Relegation is decided over the course of a season, so it should stand.