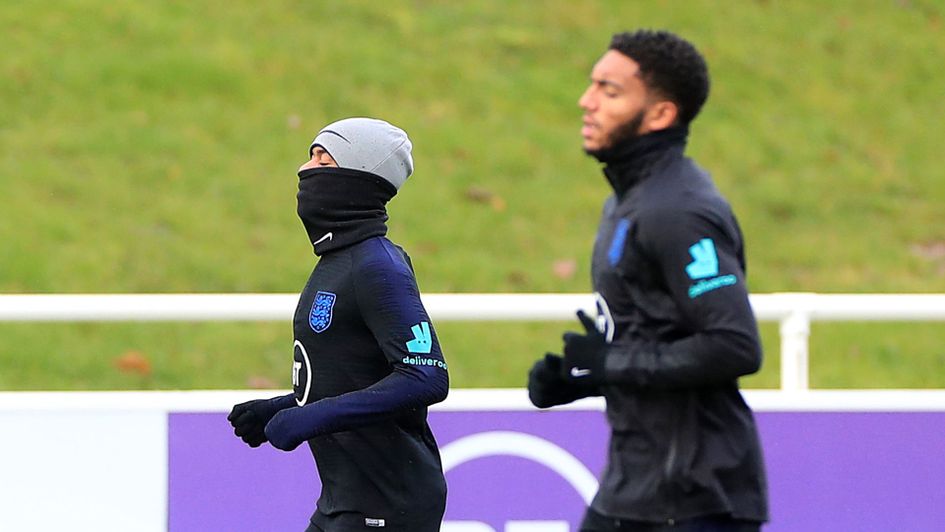 Raheem Sterling and Joe Gomez train alongside each other

Raheem Sterling and Joe Gomez: Rio Ferdinand blasts Gareth Southgate's handling of the altercation as Gary Neville has his say

The Football Association announced late on Monday evening that the Manchester City's forward would not be considered for Thursday's Euro 2020 qualifier against Montenegro after an incident in the Three Lions camp.

Sterling was involved in a clash with Gomez towards the end of Liverpool's 3-1 win at Anfield on Sunday and emotions boiled over the pair joined up with Southgate's squad the following day.

They have since trained together after the announcement but the pair's making up has come too late to prevent Sterling from missing out on England's 1000th international fixture.

Some of the squad reportedly believe the treatment of Sterling has been heavy-handed and that the fallout should have been kept in house.

That is the feeling of ex-Three Lions captain Rio Ferdinand, who has criticised Southgate's handling of the situation

"Both Joe and I have had words and figured things out and moved on."

"I feel this incident could have been handled better," he posted on Facebook. "Keep it behind closed doors & deal with it internally surely?!

"Now Raheem is left to defend himself from all of the haters that had had their keyboards turned off due to him becoming a very worthy ambassador for the English game, and rightly so.

"If this was a terrible incident then I would be all for public shaming & discipline. But for this 'throat grab' that we are TOLD it's for I can't understand it."

While the handling of the situation will be pored over, ex-England team-mate Gary Neville believes it sends a "clear message" about not letting club rivalries spilling into international football.

"I've seen incidents like this dealt with in both ways with England, and there is no ideal because it's so public," the former England coach told Sky Sports.

"But the reality of it is these things happen in football and it will blow over. He is sending a clear message. He won't accept club rivalries coming into England.

"Even when there were great rivalries between groups of players when I was in the England squad I never really saw it brew over into the camps in a confrontational manner, it was an underlying thing. I actually think this is better.

"At least Raheem's had the, sort of, courage to go and call him out if that's how he feels.

"At least it's out in the open and it will probably force them to come together and be more open about it and actually help put it behind them, which is what Gareth Southgate will want."

Both players emerged as part of the group for the Tuesday morning training session, with Gomez appearing to sport a cut close to his right eye. Sterling was hard to spot underneath a woolly hat and a snood.

The fracas between the pair is an astonishing situation and is sure to dominate the build-up to Thursday's qualifier, which not only offers the chance to seal progress but is England's 1,000th international fixture.

Sterling has already given his take, writing in a late-night Instagram post that "emotions got the better of me" and that he and Gomez "understand it was a 5-10 second thing and it's done".

Sterling added: "Both Joe and I have had words and figured things out and moved on" and "we move forward and not make this bigger than it is."

Speaking as part of the FA statement confirming the incident, Southgate said: "We have taken the decision to not consider Raheem for the match against Montenegro on Thursday.

"One of the great challenges and strengths for us is that we've been able to separate club rivalries from the national team.

"Unfortunately the emotions of yesterday's game were still raw. My feeling is that the right thing for the team is the action we have taken.

"Now that the decision has been made with the agreement of the entire squad it's important that we support the players and focus on Thursday night."

Southgate was initially only speaking to the media at Wednesday's pre-match press conference, but the England manager will now face the cameras on Tuesday afternoon.