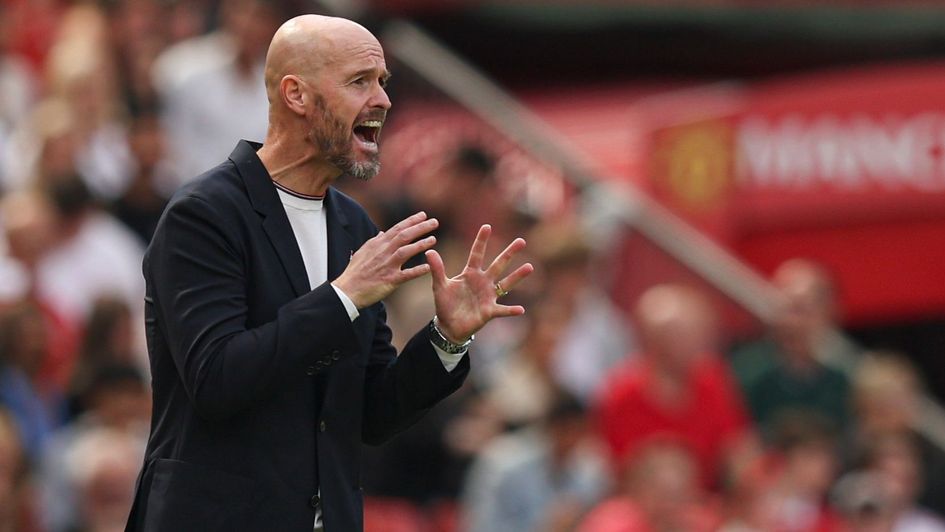 We round up the weekend's Premier League action in a less traditional fashion, delivering the xG scoreline, an Infogol fairness rating and some noteworthy data points.

Erling Haaland made an immediate impact on the Premier League by winning and then converting a penalty in the first half, before ruthlessly firing home a second after the break to help give champions Manchester City the perfect start in what was a potentially tricky opener away at West Ham.

City were impressive throughout, restricting the Hammers to three low probability chances before half-time (all between 10 and 11%) and just one of a similar chance quality after it.

Only Chelsea's 1-0 win at Everton (99.66) ranked as a 'fairer' result in the top flight this weekend according to Infogol's metrics.

Substitute Josh Dasilva’s late rocket salvaged Brentford a point as they fought back from two goals down to draw 2-2 at Leicester.

Dasilva, a second-half replacement for Mathias Jensen, crashed home with four minutes remaining after Ivan Toney had given the Bees hope following goals in each half from Timothy Castagne and Kiernan Dewsbury-Hall.

Albion were far superior in the opening period according to xG (MUN 0.22-1.58 BHA) with Gross converting the only two 'big chances' (0.35+ xG) in the half with his two goals combining for 1.14 xG in total.

Game state played its part after the break with Albion pinned back as United chased the game, which explains the hosts xG accumulation in the second period.

While Alexis Mac Allister's own goal is not attributed with an xG value itself, it was scored via a close-range ricochet off Diogo Dalot at a corner (0.58 xG) which registered as the highest probability chance of the match for either side.

The full-time xG totals make for a relatively low Infogol fairness rating, but game state must be taken into account.

Thomas Tuchel's side generated the better scoring chances, even bar the penalty (1.38 non-pen xG). The Toffees didn't create anything meaningful, failing to register a single shot in the final 40 minutes despite chasing the game.

A depleted attacking unit certainly had something to do with that, but their attacking process at home under Frank Lampard has been poor. Everton have now generated an average of just 1.00 xGF per home game during the former Chelsea manager's tenure. 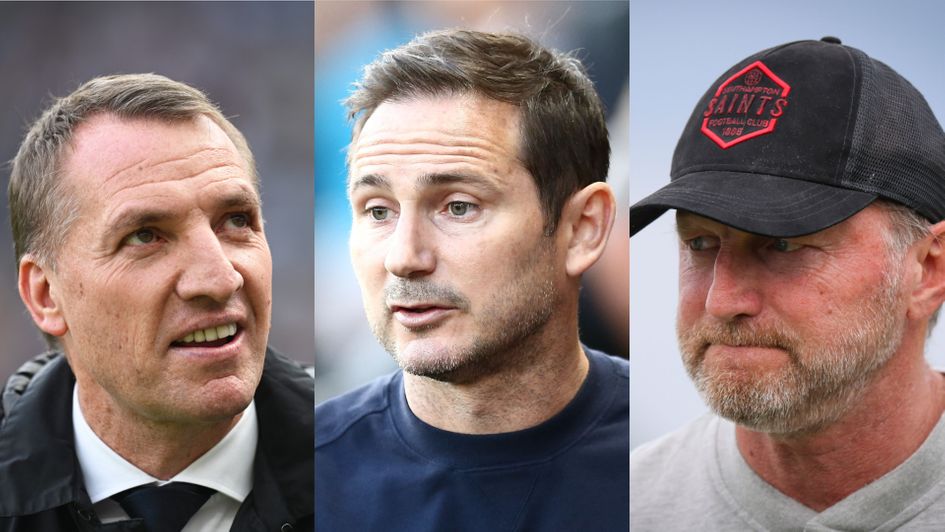 Scott Parker's Bournemouth got off to the best possible start on their return to the Premier League, beating Aston Villa 2-0 thanks to goals from Jefferson Lerma and Kieffer Moore.

As the xG totals demonstrate, the chances created by both teams were of low quality. There was just a 5% chance of the game ending in a 2-0 win to the hosts based on the quality of chances created, with a goalless draw unsurprisingly the most likely outcome (33%).

That combines to produce a very low Infogol fairness rating.

Leeds came from a goal down to beat Wolves at Elland Road, with Rodrigo's first-half strike cancelling out Daniel Podence's opener before an own goal from Rayan Ait Nouri settled the game.

Based on the chances created in the match, a 1-1 draw would have been the fairest result with Leeds having a 67.0% chance and Wolves a 65.4% chance of scoring at least once.

From a defensive perspective, the 1.06 xG Leeds allowed meant it was their best defensive display at home since they hosted Brentford in December, some 12 home games ago.

Newcastle picked right up from where they left off last season with a comfortable home win over newly-promoted Nottingham Forest, with a screamer from Fabian Schar and a poacher's finish from Callum Wilson helping them to three points.

They have now won nine and lost just two - to Manchester City and Liverpool - of Eddie Howe's 15 home games in charge.

The Magpies were excellent at the back, limiting their visitors to very little, though they weren't great in attack despite scoring twice and winning.

They mustered 23 shots equating to 1.98 xG, an average of 0.09 xG per shot, so a decent defensive structure by Forest and/or poor decision making from Newcastle's forward players meant they took low-probability attempts. 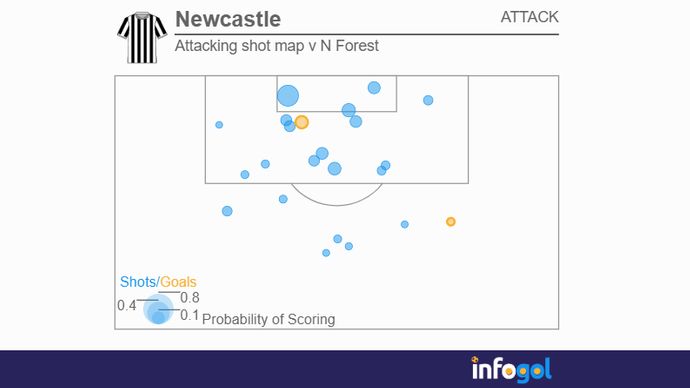 James Ward-Prowse gave Southampton a 12th-minute lead but goals from Ryan Sessegnon, Eric Dier, a comical own goal from Mohamed Salisu and a Dejan Kulusevski strike completed a thumping turnaround for Tottenham.

Spurs once again exceeded 2.0 xGF. In the 15 home games they have played under Antonio Conte they have done so on 11 occasions.

Darwin Nunez and Mohamed Salah earned Liverpool a point at Fulham, with the Reds twice having to cancel out goals from Aleksandar Mitrovic.

While far from their best, particularly in the first half, Jurgen Klopp's side created more than enough chances for victory. They generated four 'big chances' (0.35+ xG) to Fulham's one, which was Mitrovic's penalty (0.80 xG).

Though the result was far from ideal for Liverpool there were several positives in the data. 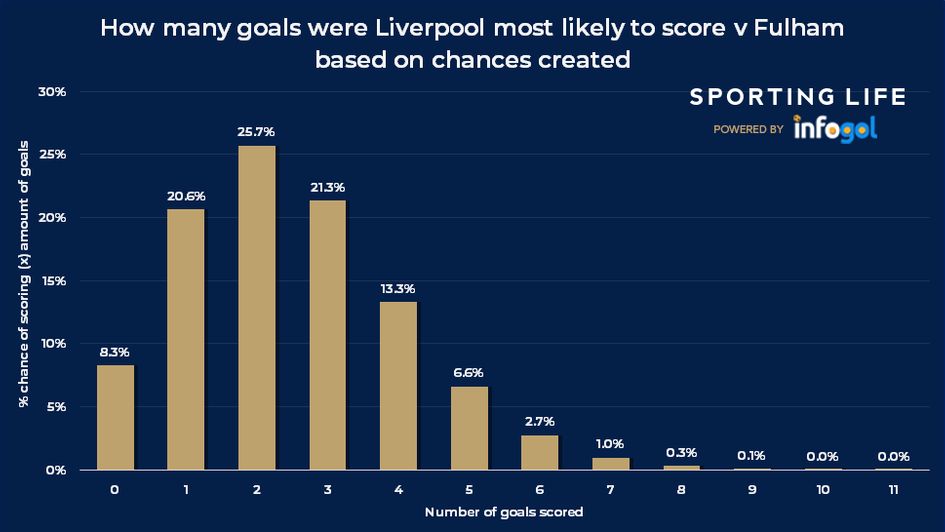 Based on the quality of the chances created, we can calculate that Liverpool had a 45.4% probability of scoring three or more goals. Fulham had a 37.2% chance of netting two or more, which is reflected in the fairness rating.

Nunez entered the pitch in the 51st minute for his Premier League debut and managed to get on the end of three big chances equating to 1.54 xG - 62% of Liverpool's total xG.

Gabriel Martinelli helped fire Arsenal to the first three points of the Premier League season in their 2-0 victory over Crystal Palace.

Martinelli headed home after 20 minutes as the Gunners made a promising start at Selhurst Park.

And while the hosts returned brighter after the break in a second half that saw few chances for either side, the wind was firmly taken out of their sails when Bukayo Saka’s cross deflected in off the head of Marc Guehi to put the game away late on.