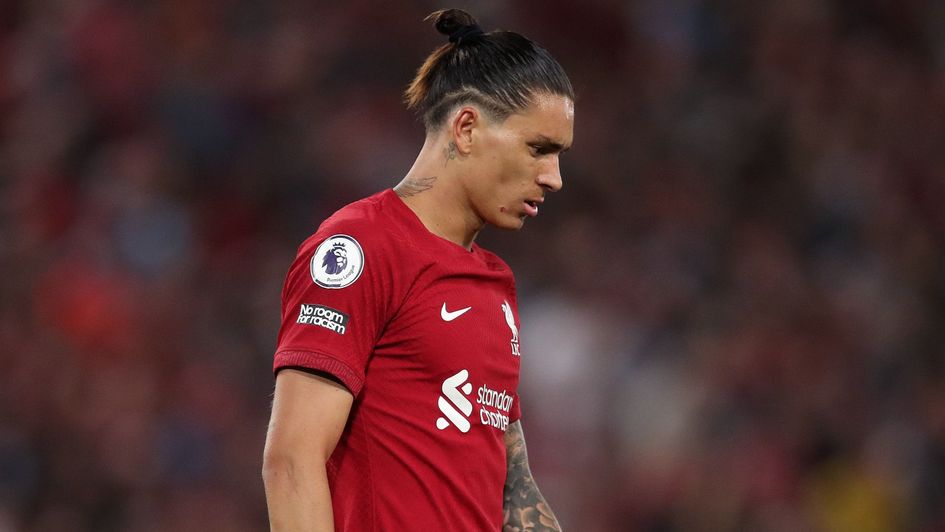 Darwin Nunez trudges off after being red-carded against Crystal Palace

We round up the weekend's Premier League action in a less traditional fashion, delivering the xG scoreline, an Infogol fairness rating and some noteworthy data points.

Striker Darwin Nunez lost his head, headbutting Joachim Andersen to be sent off on the hour, but Luis Diaz ensured 10-man Liverpool did not lose their long unbeaten home record with a brilliant equaliser to secure a 1-1 draw with Crystal Palace.

Frustration had been growing having gone behind to Wilfried Zaha’s 32nd-minute goal against the run of play but the way Nunez to reacted to being provoked by the Palace centre-back was naive at best and idiotic at worst.

Liverpool now trail Manchester City by four points, mainly due to wasteful finishing - no team has created more xG (4.7) than the Reds after the opening two games of the campaign.

Liverpool have created more xG (4.7) in their opening two games than any other Premier League team.

Stamford Bridge saw a fantastic, full-blooded clash between two of the league's best, and the game ended in a fair draw according to xG.

The Blues were the better team for large parts, but only really created meaningful chances after Spurs' in-game switch from a back five to a four.

Tottenham were far from their best, but still created enough to warrant a point.

A fantastic contest ends in a fair draw based on the chances created by both teams #CHETOT pic.twitter.com/0U5yFg0G8o

It was a feisty game from the off and the contest ended in both Thomas Tuchel and Antonio Conte getting sent off after the whistle as tempers flared.

The 2-2 draw was the fairest result of the Premier League weekend according to the Infogol fairness ratings.

Nottingham Forest beat West Ham thanks to Taiwo Awoniyi's first half goal to ensure it was a happy return to top-flight football at the City Ground.

The game was thoroughly entertaining from the get-go, and finished with the highest xG total of the season so far as the pair combined for 4.74 xG.

Forest goalkeeper Dean Henderson had a great game and he saved Declan Rice's second-half penalty, a save that proved decisive in keeping his clean sheet and getting his team the win.

Though the Hammers won the xG battle, it was Forest who created more non-penalty 'big chances' (0.35+ xG), winning that particular battle 3-1. 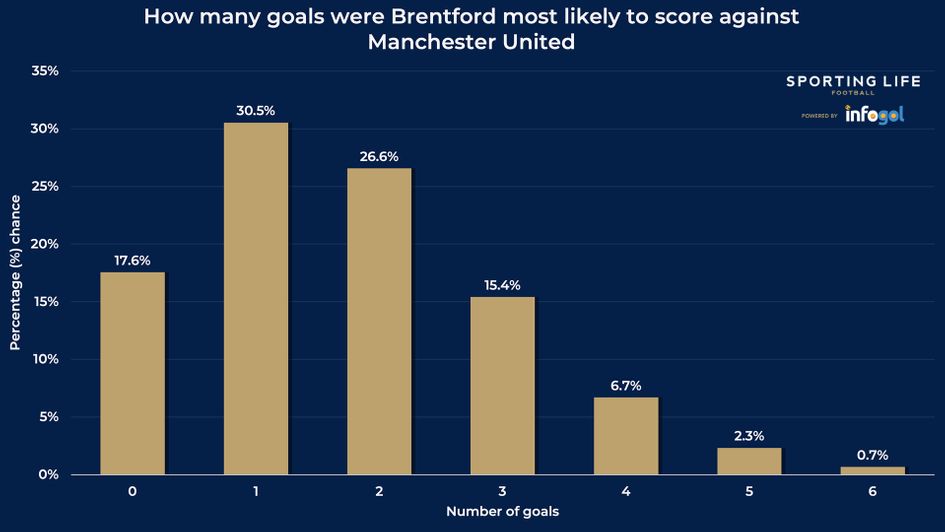 Manchester United were left stunned as Brentford secured a 4-0 win in the Premier League's late kick-off.

Four different scorers secured the result at half-time, although the expected goals highlight how Brentford capitalised on the chances they created for themselves.

The Infogol model rates it as a 2.2% chance the game finished 4-0 to the Bees, based on the expected goals figures.

It was also a 6.7% chance that Brentford struck four given their 1.74 xG. An afternoon to forget for United, but the underlying numbers show it wasn't quite as bad as the back pages will make out tomorrow.

Arsenal made it consecutive victories to open the Premier League season as they beat Leicester 4-2 at the Emirates.

Gabriel Jesus scored his first league goal for the Gunners with under 20 minutes played. The striker - surrounded by Leicester defenders - somehow found space in the box to curl his shot into the far corner. His second fired them into a commanding position at the break.

Leicester hit back early in the second-half as Jamie Vardy's pressure forced William Saliba to head the ball into his own net, but the joy was short-lived as Granit Xhaka restored Arsenal's two-goal lead just minutes later.

It was an afternoon of frustration for the Foxes who again cut the deficit, this time through James Maddison in the 74th minute, only to concede moments later.

The Infogol model rated it a 1.9% chance that the game would end 4-2 based on the expected goals figures, while Gabriel Jesus made up 52.1% of Arsenal's total xG. 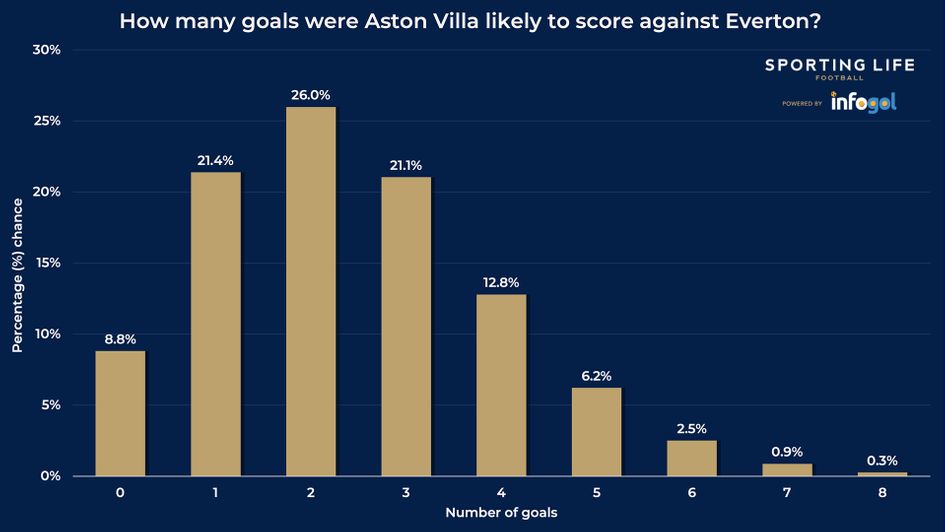 Aston Villa bounced back from opening weekend disappointment with a 2-1 victory over Everton in Saturday's early kick-off.

Danny Ings' well-taken goal fired Villa into the lead with just over half an hour played. Ollie Watkins had space out wide thanks to John McGinn's long ball forward, and the cross hit Ings who turned and fired low into the Everton net.

Diego Carlos' close-range header in the opening minutes went over the crossbar - that accounted for 71.4% of the hosts' total first-half xG tally.

Emi Buendia fired in a second in the final ten minutes of play - a chance carrying a huge 0.80 xG - but Lucas Digne's own goal gave the away side some hope shortly after.

Buendia only had two shots in the contest after coming off the bench, but he made up 39.5% of Villa's total xG.

Brighton were unfortunate to be held to a 0-0 draw by Newcastle based on the chances created by both teams.

The home side enjoyed the better of the opportunities in a goalless first-half, posting 0.39 xG to Newcastle's 0.10. Leandro Trossard carried the biggest threat, accounting for 41.0% of the Seagulls' xG prior to the break.

The hosts were the ones looking the most likely to score but couldn't convert the openings they were creating in attack.

The Infogol model makes it a 16.0% chance that this game would be a 0-0 draw given the two xG tallies posted by both sides, and it produced comfortably the lowest fairness rating of the 3pm kick-offs. 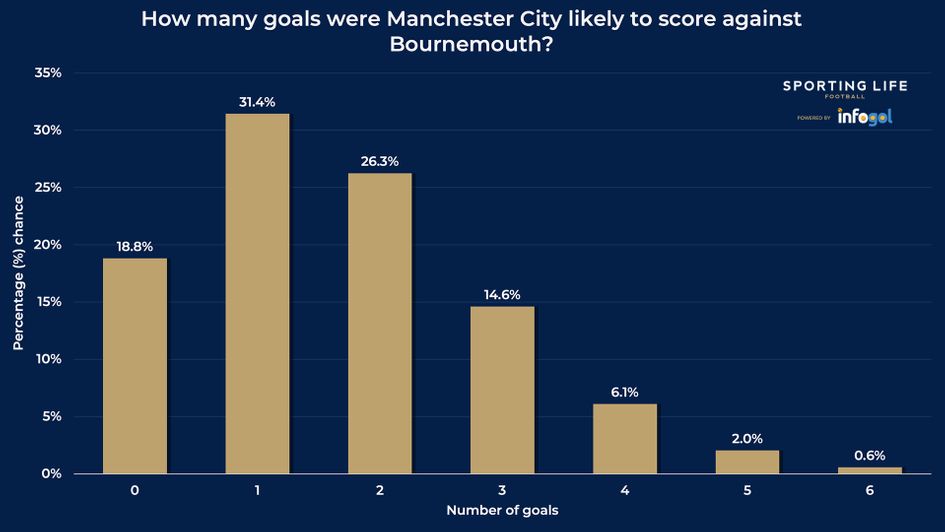 It was a comfortable afternoon for champions Manchester City as they secured a 4-0 victory over recently-promoted Bournemouth, providing Members Extra readers with a winning Mark O'Haire Nap.

Having made an impact with two goals last weekend, Erling Haaland turned provider to play in Ilkay Gundogan to open the scoring with 19 minutes on the clock.

De Bruyne doubled the advantage with an outside of the boot effort into the far corner, before Phil Foden made it three as half-time approached.

Jefferson Lerma's own goal was the only scoring action of the second-half. The Infogol model says that - based on City's xG figure - it's a 6.1% chance that Pep Guardiola's side would score four as they ruthlessly took care of Bournemouth.

Southampton came from 2-0 down to rescue a point in their home opener against Leeds.

Both sides had chances but Leeds will be worried after Patrick Bamford went off injured with under 30 minutes played - he made up 35.7% of their first-half xG.

Less than 60 seconds in the second-half, Rodrigo - who had been moved further forward at the break - converted Jack Harrison's cross to give the visitors the lead.

He netted a second on the hour mark - contributing 62.1% of Leeds' total xG at that stage. Joe Aribo pulled a goal back as Southampton pushed in the final 20 minutes.

Kyle Walker-Peters then levelled things up as he struck from close range (0.32 xG), in a result that scored highly on the fairness ratings. However, it was only a 6.9% chance the game would end 2-2.

Fulham failed to capitalise on a second-half penalty as they drew 0-0 with Wolves.

Daniel Podence had the biggest chance of the first-half but couldn't convert with 31 minutes on the clock, while Fulham were looking to Aleksandar Mitrović as he made up 76.6% of their xG before the break.

Morgan Gibbs-White had a big chance in the second-half (0.46 xG), however he failed to convert following a cross into the box. Mitrović was then presented with the game's biggest opportunity to score in the 81st minute but his penalty was saved by Wolves keeper Jose Sa.

Based on the xG totals of both teams, the Infogol model made it a 8.5% chance that the game would finish 0-0.